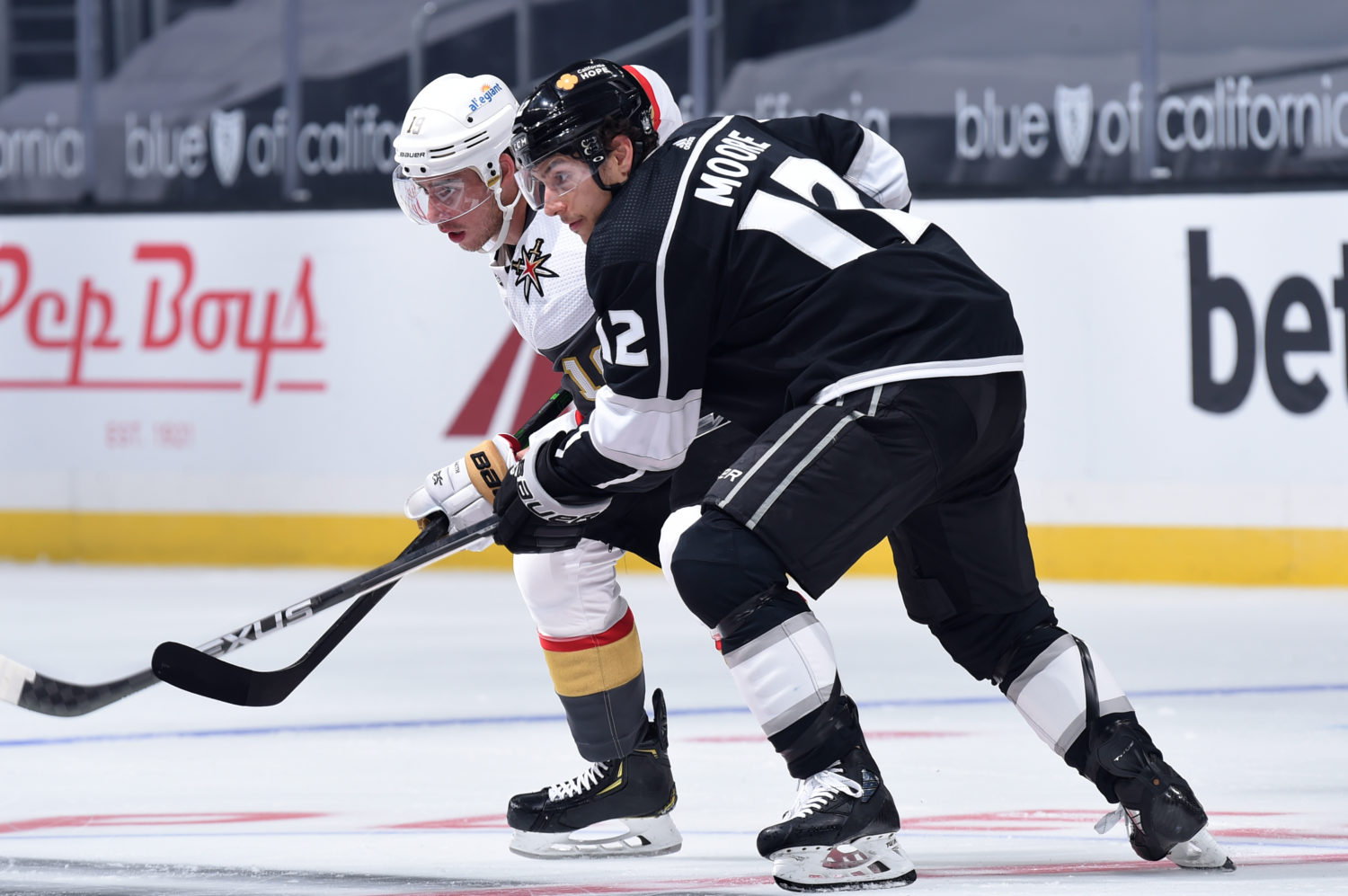 This week, the LA Kings hosted one of the best teams in the NHL in the Vegas Golden Knights. Across two games played, both victories for the visitors, it was pretty clear why they are regarded as such.

On Monday, Vegas flipped the script, quickly, after what was a promising first half of the game for the Kings. In a span of just five minutes, a 2-0 Kings lead was gone. Vegas scored twice off the rush late in the second period, which tied a game that until that point had featured aggressive play, offensive-zone time and firm mentality from the Kings, which had them outplaying one of the league’s elite teams. Another rush goal in the third, and a power-play tally, brought Monday’s final score to 4-2.

Wednesday was perhaps an even better example of the opportunistic nature of the Golden Knights. Vegas scored off a 2-on-1 rush and a wrist shot from the tops of the circles, before a crazy bounce made it three for the guests in the first period. A breakaway, a one-timer, and another flukey goal later, and the Kings really didn’t have an answer on night two, despite the first two-goal effort of Trevor Moore’s NHL career.

“From their perspective, that’s what a real-good team looks like,” Todd McLellan said after the game. “They come in waves, they execute, they’re patient, they score on their opportunities, they check their asses off, they protect their goaltending…their goaltending was real good when they needed it, and that’s why they’re going to have a chance to win this year.”

Monday’s game was interesting, because it showed both sides of the Kings this season. The first half of the game proved that when the Kings do the right things, play on their toes, play aggressively, and play to their identity, they can match up with a team like Vegas. The second half showed that when the power play is losing momentum, when the team isn’t setting itself up well in transition, and when odd-man rushes stack up against, it’ll be tough to win those kinds of games.

The Kings had a legitimate chance to win on Monday, but on Wednesday, it was the visitors imposing themselves from the start of the game. It wasn’t due to lack of effort, maybe even the other way and perhaps going a bit too hard, while losing sight of the finer details in the process.

Wednesday’s game saw the Kings allow a season-high in scoring chances against, and the second-most high-danger opportunities against this season. This all coming from a game when overall shot attempts at even strength were about the same. McLellan said yesterday that the Kings have been puck watching too often recently, with five individuals looking at the puck, leaving opposing players uncovered in dangerous areas on the ice. Though he admitted there are several areas of emphasis, that was the one that stood out as the largest, and is a big part of the explanation in the disparity of the Grade-A opportunities.

Not to say there weren’t impressive individuals – Looking at you here, Trevor Moore. Moore has been lauded as an effective energy player, who has gone from a guy who started there year on the fourth line, as one of the last names on the lineup sheet, and has grown into an impactful player, who now plays in all situations. Moore scored twice last night, including his first career NHL power-play goal, as he was rewarded for the work he’s brought all season long.

“It’s what you work for, you want to earn that kind of thing and I think the last couple of games, I haven’t been that great with that opportunity,” Moore said yesterday. “I just wanted to make good on the opportunity, show that I’m appreciative of it, and keep pushing forward.”

In the larger picture, there isn’t a ton of shame in losing two games against Vegas. The Golden Knights are in a championship window, expected to be amongst the top handful of teams in the NHL with a legitimate chance at winning a Stanley Cup. The Kings are still building towards that and they’re not there at this stage in the process. We’re not at the bottom of the valley anymore, the organization is on the upswing back towards the ultimate goal, even if it doesn’t always feel like it, but even so, it’s still early in the climbing process. Sometimes, despite best efforts, those stages present themselves and they seemed to this week.

In the larger picture, the race for the final playoff spot is certainly……something. I’m not sure if it’s been necessarily good, or exciting, but it has been close. On March 10, the four teams in the West Division sat as follows –

The Kings were three games above .500 and looked to be in a very good position to make a run at what was then more than just one playoff berth in the West Division up for grabs.

Since that date, the number of available positions has shrunk to one, and the Kings have won just 5 of 17 games played. What’s been interesting though, is that none of the teams around them have fared much better.

It’s hard to fathom that losing 12 of 17 down the stretch of a season hasn’t completely buried a team in the playoff race, but when neither of the other three teams around you in the standings have played over .500 in that span, I suppose it keeps things close. As such, the Kings have lost just two points against the current fourth-placed team, St. Louis in the last month.

The road ahead does not get any easier, with a visit to the division-leading Colorado Avalanche coming up this weekend. The last trip to Denver featured just one Kings goal from the two games played, with puck possession and scoring opportunity metrics heavily favoring the Avalanche, and no team has won more home games than Colorado so far this season.

There is little time to lick wounds from this week, or dwell on the last trip to Colorado. The games are fast and furious now through the end of the season. That leaves little time to make the improvements that the coaching staff would ideally like to work on in practice.

“We’ve got to fix things,” McLellan said. “It’s not all going to be wins and losses related, the repair work in practice is very limited, we’ve talked ad nauseam about how little time we get, but other teams are fixing things on the fly too. Our group, I don’t know if it’s inexperience that they’ve got to feel it on the ice or walk through it more often than just seeing it visually, but right now, we’re not capturing things and it’s costing us.”

Practice time is at a premium, and adjustments will need to be made in other ways. As far as the outlook, perhaps though, at this stage in the season, we should take Austin Wagner’s approach. Though disappointed in elements of the game, he’s got the grander picture figured out.

“The sun is going to rise tomorrow.”

Rise it did, and rise it will again tomorrow. Not much sense in dwelling on what was, with another opportunity for the Kings to get back on track.