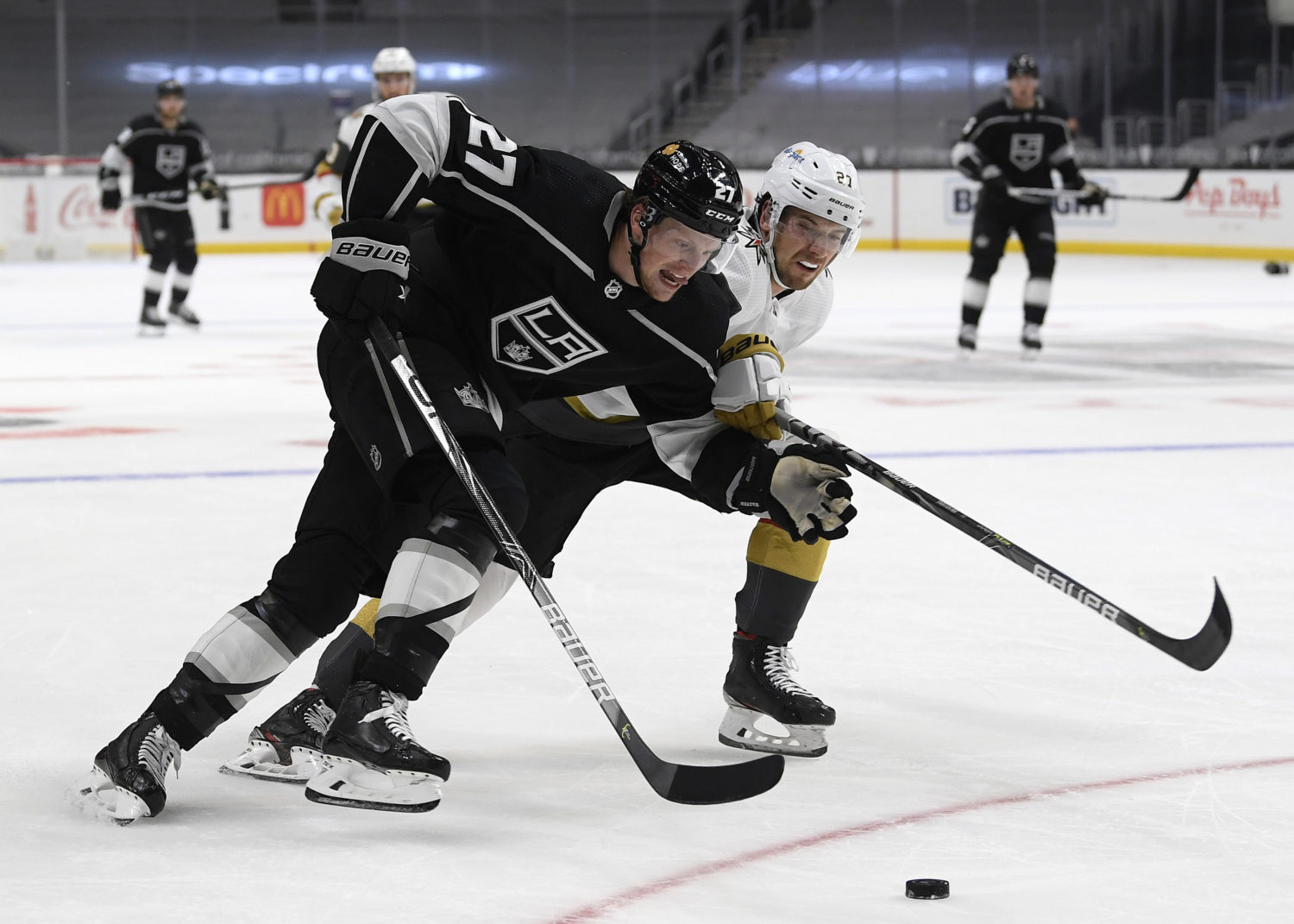 The LA Kings started off fast, bright and energetic in the first half of tonight’s game, opening up a 2-0 lead in the process. It was all Vegas from that point on, however, with four unanswered goals, in a 4-2 victory at STAPLES Center.

A back-and-forth, entertaining first period saw the shots on goal tied at 12 apiece, and the lone goal go the way of the Kings. Transitioning through the neutral zone, forward Brendan Lemieux sprang Austin Wagner behind the defense, who beat Robin Lehner through the five hole for his fourth goal of the season. The primary assist was Lemieux’s first in a Kings jersey, as LA scored first for the third straight game.

The Kings made it a 2-0 game midway through the second period, as the top line connected for a goal down low. Alex Iafallo won the puck below the goal line and kicked it to Dustin Brown, who fed Anze Kopitar at the back post for the goal. All three players now have points in three straight games, as the Kings pulled ahead by a pair.

Vegas tied the game at the second intermission, however, with two goals off the rush. First, Nicolas Roy kept it himself on a 2-on-1, and deked to his forehand to beat Cal Petersen with 6:40 to play in the second period. Mark Stone then capitalized on a breakaway, with his team shorthanded, inside the final minute of the middle stanza to knot the score at two. As noted below, McLellan felt that this power play was the turning point tonight, sending momentum back towards the Golden Knights.

The visitors scored twice in the opening half the third period, to take a two-goal lead of their own. First, off the rush, Alex Tuch went end-to-end, weaving through the neutral zone, into the attacking end, and snapping a shot past Petersen on the blocker side from the slot for the 3-2 advantage. Vegas then scored its second goal on special teams, this time on the man advantage, with Max Pacioretty beating Petersen from the left-hand circle, through a Mark Stone screen, to make it 4-2.

After they went down by a pair, forward Andreas Athanasiou had the best chance at pulling one back, but his shot hit the post on a 2-on-1 opportunity. From there on, the veteran team that Vegas is closed the game out, as they won for the fifth time in seven head-to-head meetings this season.

Hear from Austin Wagner, Blake Lizotte and Todd McLellan from after tonight’s game.

On what he feels the forwards can do against the transition game Vegas brings
Just be more responsible on the puck, the bluelines, both the offensive and defensive bluelines. We had a lot of turnovers tonight, they’re a good transition team and they had quite a few chances off of our turnovers. That’s one of those things where you shoot yourselves in the foot, when you turn the puck over in that area.

On the play of his line, and the feedback they received
I think we were just rewarded with more ice, we were out there for a lot of opportunities, whether it was in the d-zone, to win a faceoff, or the o-zone, creating chances. For the most part, our line did create, probably could have scored a couple more tonight, the puck was just bouncing and that’s just the way tonight went, unfortunately. You get feedback from the guys, when you go out there and have a good shift, it lifts the bench up. Hopefully look to continue with that.

On the tougher goal to concede, the shorthanded goal, or the rush early in the third
Do I have a C choice to say both? The power-play one was the toughest for me, because they had chances before that. We got sloppy, we got careless. If the power play isn’t scoring, it should at least gain you a little bit of momentum, and it did none of those things tonight, all it did was give back momentum. I thought that was the turning point. Obviously, the end-to-end rush was very poorly played, that’s disappointing as well, but the power play one was the one that came late in the period. It wasn’t the first breakaway, or the only breakaway, on the power play situation tonight, so that’s disappointing.

On if he was happy with tonight’s start to the game
Well, it was a better start than what we’ve had. We didn’t want to go to the penalty box 25 seconds in, that could have been a real tough thing to overcome, to give that team a power play on real good ice right off the bat, before a lot of players even got on the ice, but we killed it. Then we did a good job of getting out to a 2-0 game against them, but they’re that strong, that you go to sleep, you make a poor play, or combine 2-3 bad plays or get caught out long and they’re making you pay for it. That’s what championship-caliber teams do and we’re working towards that, we want to become that, we can’t quite put it all together yet. But, the start itself, was better than some we’ve had lately.

On Brendan Lemieux and how he’s settled in so far
I think he’s still trying to fit into the group, figure out how we play, get to know his linemates. I think we’re going to have to give him a little bit of time.

On what changed between the first and second halves of the game
Power play. The lack of execution on the power play, as I said before. If you’re not scoring, your job is to create a little bit of momentum and energy, and a lot of the life got sucked out of us on the power play, and it opened the door for them to come back in and strike, and they did.

– Forwards Dustin Brown, Alex Iafallo and Anze Kopitar each extended their scoring streak to three games with a point tonight.
– With his goal, Kopitar has now collected a point in 13 of the last 15 games against the Golden Knights, including each of the last seven played in Los Angeles.
– With the primary assist on Austin Wagner’s game-opening goal, forward Brendan Lemieux collected his first point as a member of the LA Kings.
– The Kings fell to 3-11-5 in the first game of two-game sets this season.
– The Kings scored the game’s first goal for the third consecutive game.
– Cal Petersen faced 40+ shots for the third time in his last four starts against Vegas

The Kings are scheduled to practice tomorrow at Toyota Sports Performance Center at noon.