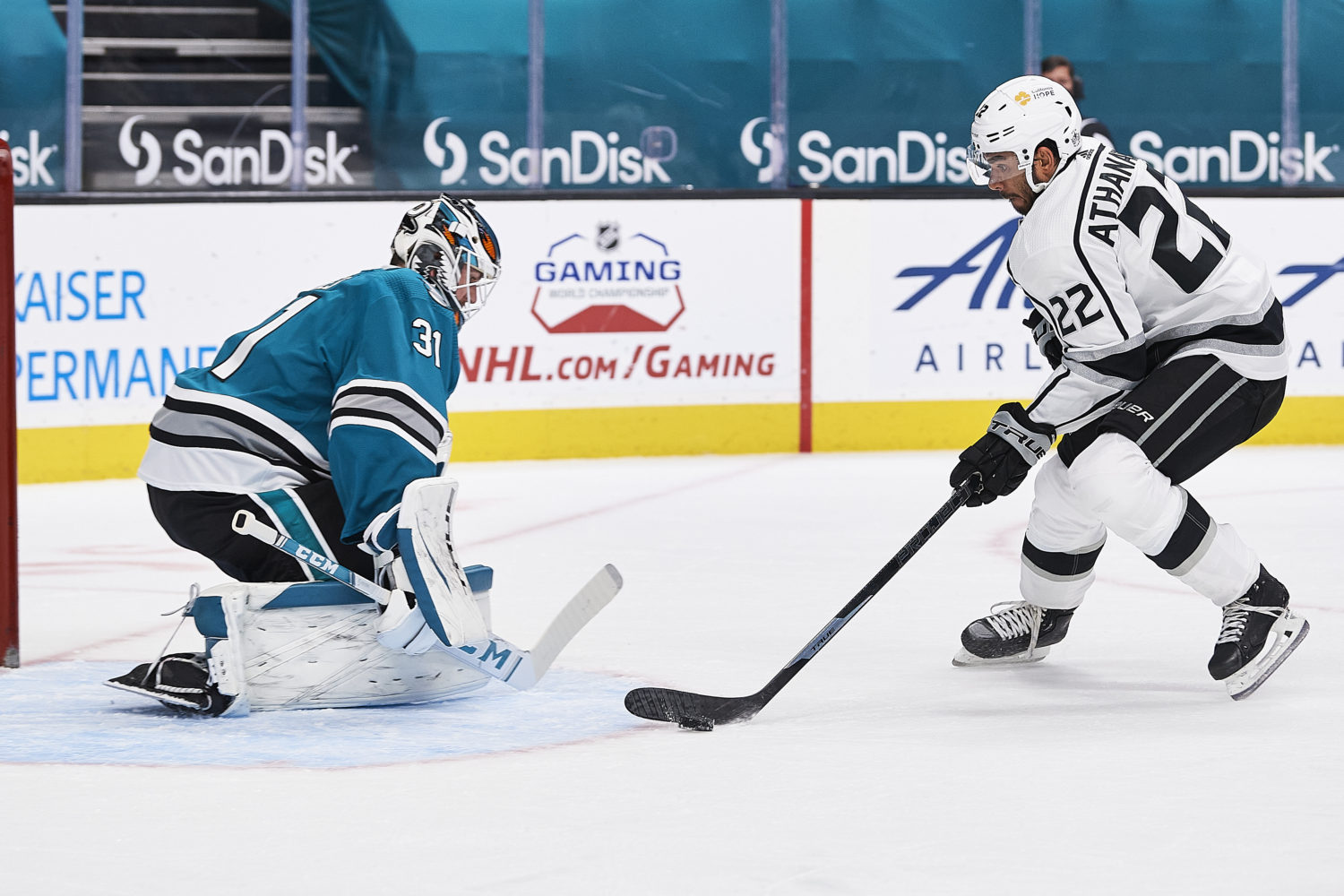 These two-game sets are starting to feel a bit repetitive, aren’t they?

The Kings have developed a pattern of a loss on night one, followed by a much-improved victory on night two, and that held firm this weekend in San Jose.

Friday’s 5-2 defeat left the Kings ruing the goals allowed into their net off of “long chances” as Todd McLellan said several times after the game. As has been the case for much of the season, the Kings also had several offensive opportunities of their own but were not able to make enough of them count to trouble the Sharks.

Saturday’s game, as second games have been, proved to be a much different story. The Kings were much cleaner defensively, and more opportunistic offensively, as they prevented the rush goals that have plagued them against the Sharks this season, while they capitalized on more of their own opportunities, pulling a complete, sixty-minute effort in a 4-2 win.

“Yeah, we were better in that area,” McLellan said the second night. “In the first period, I think we gave up two outnumbered, ones that weren’t of any significance, one in the second. Last night, against them, we gave up a boatload and it made a big difference in the game tonight. We adjusted and the guys played better in that area.”

The Kings are 3-10-5 in first games of two-game sets this season, and 11-5-2 the second night. Just three wins from 18 first games played, and just five games without a point from second games played. McLellan has done his best to explain why, but there doesn’t feel like a firm rationale behind it. Puck possession metrics over the course of the season at 5-on-5 are slightly better on second nights, but not by much.

As we complete two-game series number 18, however, is it fair to say that a trend has developed? And, if so, should we be happy to see that the team is clearly capable of making adjustments in between games, and executing those adjustments, or disappointed to consistently need to win on the second night to earn a series split?

Perhaps though, what Night 2’s have shown us, is that the Kings have developed the recipe for success this season. That hasn’t been the problem, because when the Kings have been solid defensively, and have gotten scoring beyond the Kopitar line, they have typically been a pretty solid hockey club.

What has prevented the team from taking that next step has been finding that game on a consistent basis. When the Kings are not stout defensively, they have not shown themselves thus far to be the kind of team that will outgun opponents. And when the team hasn’t found secondary scoring to support the big guns, even solid defensive performances have come up short by a goal on certain nights.

The name of the game is consistency. When the Kings do the right things, and play the right way, the team as assembled can win hockey games. Now, for a young, evolving team, it’s a matter of doing them more consistently.

“I think we have a foundation, or a structure understanding, of what we want to play and what we want to do,” McLellan said. “We actually talked about it today, an identity I think we have to play towards. If we get away from it and try and run and gun with teams, we get ourselves in trouble. We still need some polish in and around the net, with the number of opportunities we create, all it does is create faceoffs or transition coming back the other way, that’s something that we have to improve on. At this time of the year, we should have all that stuff in place, it’s just a matter of getting it done.”

That recipe for success was evident on Saturday in San Jose. The Kings conceded just twice, with one goal coming on a power play. At 1.22 expected goals allowed, the Kings posted their fifth-best figure of the season, and their best since March 5. Compare that to Friday, when the team posted its second-worst xGA of the season, trailing only the dud against Anaheim back in early-February.

In terms of additional scoring, they got two goals from the Andreas Athansiou – Blake Lizotte – Jeff Carter line, which has consistently created offensive opportunities since being reunited, as well as goals, with four from three-plus games together. Last week, it was Anderson-Dolan’s line that scored twice, on a night where Adrian Kempe also scored. Both of those games were wins.

The standings currently paint the Kings as six points out with 16 games left to play. How close they can ultimately get to that fourth position in the conference will come down to the level of consistency they can find over the remainder of the schedule. Another skid of losses likely closes the book, but another winning streak, even a shorter one than the six-game run earlier this season, makes things interesting. With every game this season played within the division, someone is always gaining points, so every game is important.

It starts with four straight against the division’s elite in Vegas and Colorado.

As the team now approaches the trade deadline, tomorrow at noon local time, the Kings have been one of the trendier names that have popped up around the coverage of the league. With some free agents at the end of the season, as well as additional players with term remaining, who would be of interest to a contending team, it’s easy to understand why.

From pointed post-game comments from McLellan, he was not having much of it, however, stating that the rumblings occurring “on the outside” differ vastly from the conversations ongoing internally.

Where exactly the deadline shakes out for the Kings, and the rest of the NHL, will be determined over the next 24 hours. It will be interesting to see how this season’s deadline specifically is approached, when considering quarantine protocols, a flat salary cap, an upcoming expansion draft and an NHL Draft where teams could have less information available to them on draft day than in a normal season, considering restrictions on scouting.

From comments made by both McLellan and General Manager Rob Blake, the team’s preference at this point in the plan is not to hold another firesale, as has been the case over the last two seasons. What exactly ends up happening, well I suppose that will be the fun of the next 24 hours.

Full coverage of any potential moves regarding the Kings will be here on LA Kings Insider. Until that thread, or until Monday’s game preview thread, Happy Sunday, Insiders!