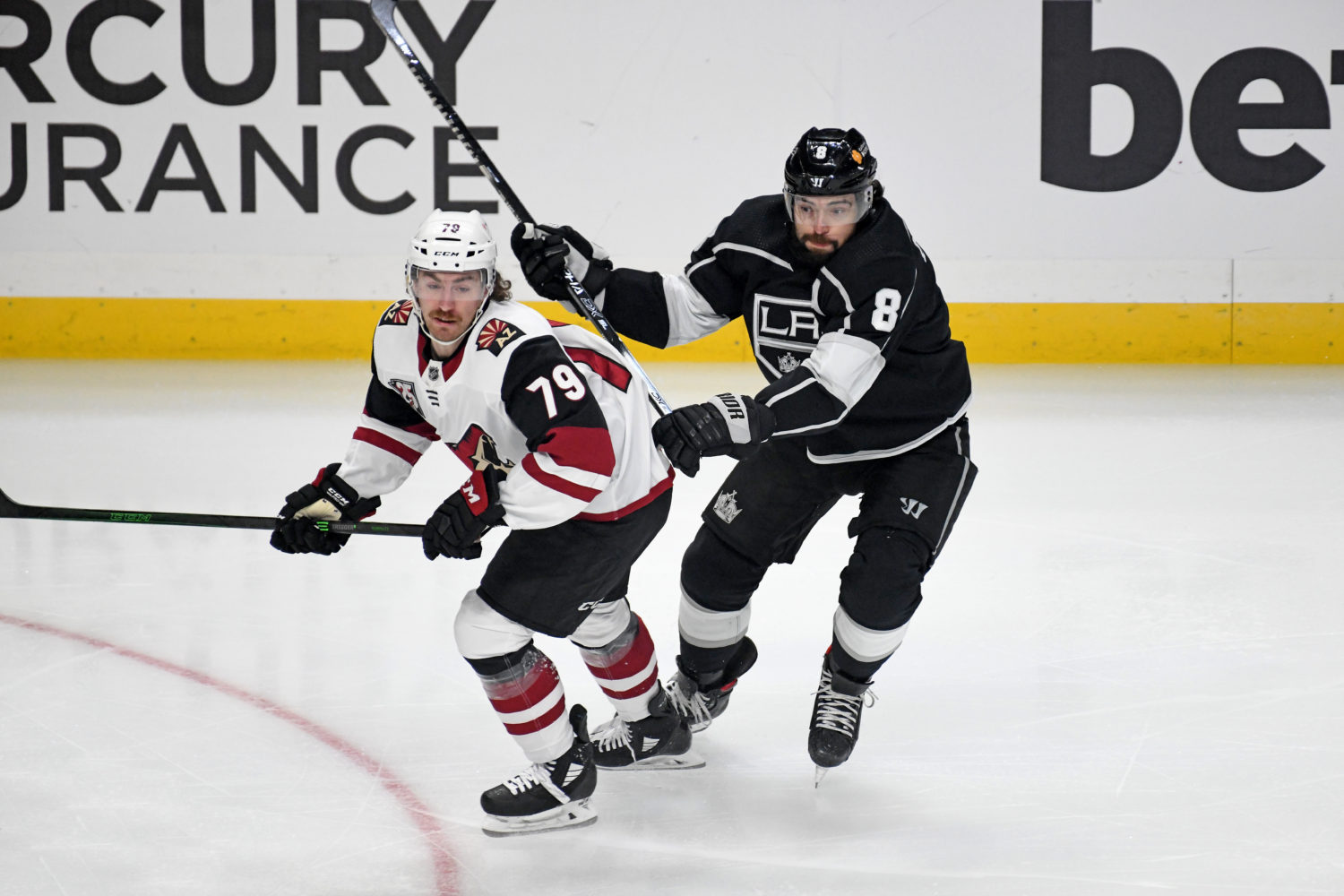 The Kings dropped their third straight game on home ice, as a slow start to the game did them in during a 5-2 defeat against Arizona. More on the factors behind that in post-game quotes from Drew Doughty and Todd McLellan below.

The Coyotes came out firing, as they scored three goals in less than five minutes of game time in the first half of the opening period. Forward Michael Bunting scored twice, first burying a one-timer from the slot, and then putting home a rebound on the power play. Forward Derick Brassard made it 3-0, as Arizona capitalized off a Kings turnover and Conor Garland fed Brassard for the goal from the right-hand circle.

The Kings got one back before the intermission, as they snapped a six-game scoreless drought on the power play. At the left point, defenseman Drew Doughty put his shot through traffic in front, and over the glove hand of Adin Hill, to give his team some life at the intermission.

Arizona got a goal back on what was a difficult to understand play, which included a delayed offsides review, and an eventual third power-play goal for Arizona. Embedding the explanation from the Bally Sports West broadcast team here, which walks us through the correct call, being a delayed offsides situation. The Kings challenged the play and lost, with Bunting’s goal completing his hat trick.

The guys give their breakdown and analysis of the bizarre delayed off-side play in tonight's game ⤵️🏒@Patrick_ONeal | @jarretstoll | @JimFox19 pic.twitter.com/giR9HEYHLe

The hosts pulled one goal back in the third, an early one, from forward Andreas Athanasiou. Defenseman Kale Clague activated down the left-hand wall and hit Athanasiou on the backhand in front for a redirected effort that went over Hill. LA had several opportunities down the stretch, with 82 percent of the high-danger chances for (9-2), but couldn’t pull any closer before Christian Dvorak’s empty-net goal ended the game.

A lot of post-game frustration, as evidenced by the post-game quotes below. Hear from Doughty and McLellan after tonight’s game.

On if he felt the team’s desperation level was lacking in the first 40 minutes
I think that’s what’s been lacking for the last five games. We haven’t had any intensity, anyone competing – I shouldn’t say that, we’ve had some guys competing every single game – and we’ve had others play good games and take games off. We’re down 4-1 in the third period, I sure hope we’re playing a little more desperate, but it’s absolutely ridiculous we didn’t play like that in the first or the second, or the last four games, besides the Vegas game.

On his ability to take games over when the team has gone down
That’s my responsibility in that position, when we’re down goals, to take it over. I try to take it over from the puck drop, every single game, it doesn’t matter, but when you’re down by goals, you take way more risks, be up in the play the entire period. That’s what I’m trying to do, but we need more guys doing that. We can’t just have one, two, three guys try to make a difference in the game, we need everyone making a difference. That’s the only way we’re going to win hockey games.

On if tonight’s game serves as a call to action for the team moving forward
It should have been a call to action games ago. We put ourselves in a good spot, and the last two weeks or so we’ve absolutely shot ourselves in the foot, and now we’ve got a lot of work to do, a lot of climbing to do, a lot of winning to do. Honestly, I don’t even remember your question, I’m so pissed off right now, but I don’t know. We just need to be better, that’s it. Enough of us talking about playing good in the third period, we’re losing in the game, we should be good in the third period. It’s about how we’re playing from the puck drop, that’s the bottom line, and we’re not showing up for that.

On what he’d like to see from the team on Wednesday, after tonight’s performance
Compete, act like you’ve earned your spot in this lineup and on your team and run with it. Don’t sit around, hoping you’re going to get more shifts. Take your chance and run with it. I think some guys are just worried about being in the lineup, and I understand that, but at the same time, we need our second and third core guys, along with our top core guys, to all set up right now. Play as if it’s a playoff series, every single series we play in, and that’s it. I don’t know what else to say.

On if he would agree with Doughty’s comments on intensity, compete and desperation
Yepp.

On the start to tonight’s game, and the early penalties that set the team back
Well, by the time we were done playing seven minutes, we were down by three, we had taken two penalties, so I think that gives you a pretty good indication that the intensity level for the white team was a lot higher than the black team.

On his biggest takeaway from tonight’s game
Disappointment. Lack of preparedness and intensity early in the game, when you need it. You’re out of the game and then you decide to play? That’s []backwards.

On if Gabe Vilardi is risking not being in the lineup
Yepp.

On if he feels desperation is setting in, with the team now 9 points out of a playoff spot
Well, that’s kind of an oxymoron, or it’s interesting how you word that, is the desperation setting in now. Where the hell was the desperation nine minutes into the game? I don’t think that big picture. Let’s face it, we don’t deserve to be in the playoffs if we don’t have the intensity to play to get to the playoffs. It’s as simple as that. I think there’s enough guys that have been there, and know that the journey to the playoffs is just as hard as the journey through the playoffs. We have a pipedream of making the playoffs with the type of commitment and intensity that we brought to the rink tonight, and maybe a couple of other games over the last little bit. That should answer the playoff question.

*McLellan also said that Brendan Lemieux will play in the team’s next game.

– With his first-period goal tonight, Drew Doughty’s six power-play tallies are tied for the league lead among NHL defensemen this season. His eight goals this year rank sixth among blueliners.
– Doughty’s goal snapped a six-game scoreless streak for the team on the power play.
– Anze Kopitar became the 14th player in the NHL this season, and the fourth in the West Division, to reach the 40-point mark this season. Kopitar ranks fifth in the NHL with 32 assists.
– Andreas Athanasiou scored in the third period tonight, his second goal and third point over his last four games.
– Arizona scored two power-play goals tonight, the third time this season the Kings have allowed multiple PPG’s in a game.
– The Kings have now allowed the first goal in 24 of 37 games this season.