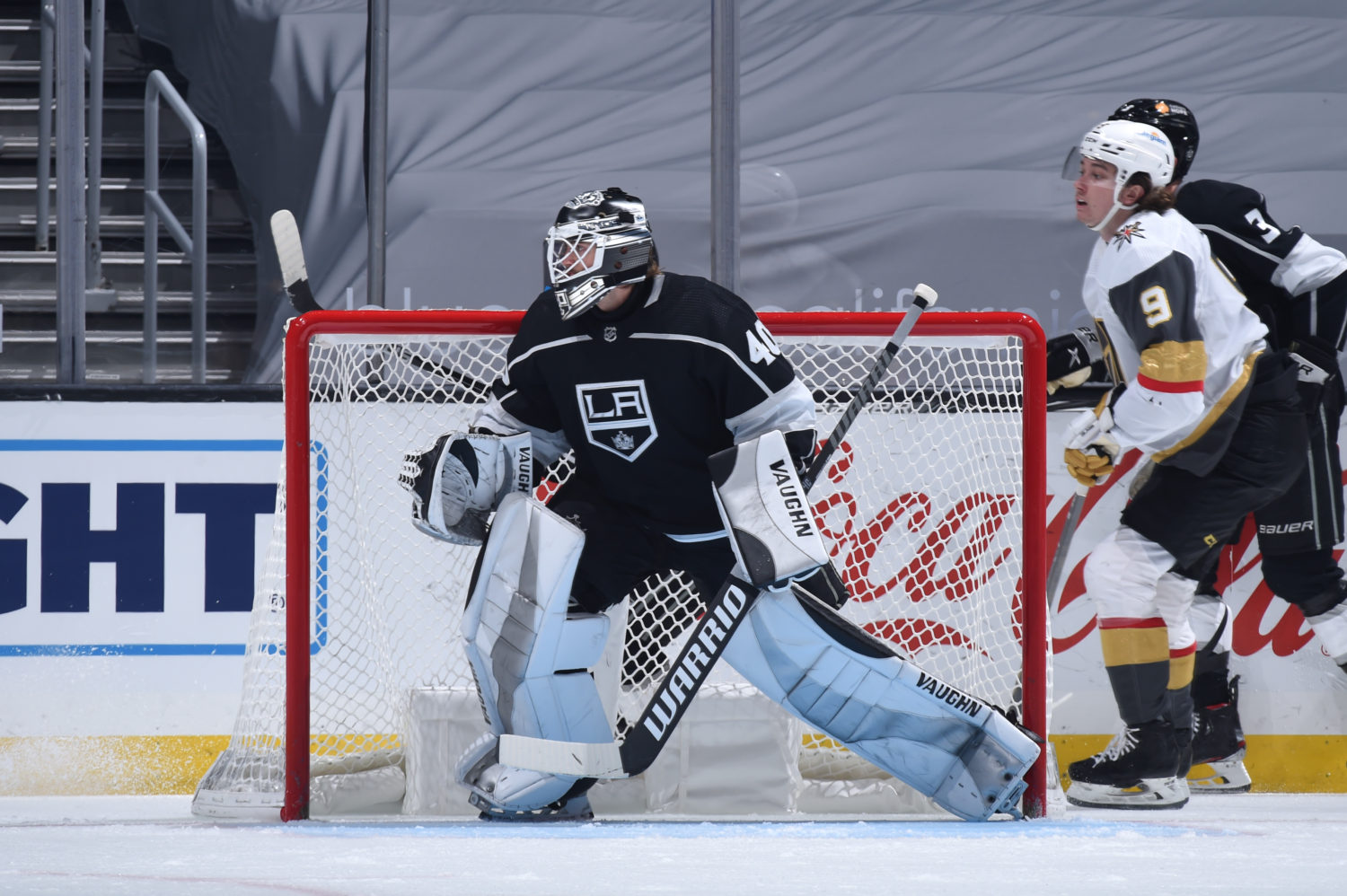 After falling in the first three games of the season against the Vegas Golden Knights, the Kings came out looking a bit different tonight. Behind a strong start, and two goals in the second period, Los Angeles was able to earn its first win of the season over its foe from Nevada, picking up a split from the two-game series at STAPLES Center with a 3-1 victory.

Though neither team scored in the opening 20 minutes, the Kings came out much more aggressively tonight than they did on Friday, playing more of their game than letting the Golden Knights impose theirs. The aggressive forecheck, that has been a staple of the team’s success so far this season, was present with the Kings forcing turnovers, and holding a narrow 10-8 shots-on-goal advantage.

After the goalless opening period, the Kings continued their pursuit in the second, and were finally rewarded through Sean Walker’s first goal of the season, on a rebound opportunity following a shift with a lot of puck control in the offensive zone. Vegas challenged the play for goaltender interference, and was unsuccessful, leading to a Kings power play.

Just 51 seconds after Walker’s goal, the Kings made their opponents pay for the untimley challenge, as forward Dustin Brown buried an Alex Iafallo feed for his 14th goal of the season, and a two-goal advantage midway through the game. Anze Kopitar collected assists on both plays, as he continued his high-octane offensive campaign.

Vegas put on a push in the third period, and Cal Petersen and his teammates nearly pulled out the shutout, but a hard-luck bounce against gave Tomas Nosek a rebound goal off his chest just over three minutes from the final buzzer.

With a silky-smooth move on a breakaway, forward Jeff Carter scored a big insurance goal, as he split the defense through the neutral zone and slid the puck through the five-hole on Marc-Andre Fleury, to re-take a two-goal advantage.

With 41 saves on the night, Petersen was stout again between the pipes, as he posted another impressive effort in net versus Vegas.

On the team’s faster start tonight, setting the tone for the game
Yeah, the start was definitely better, and obviously, you maybe want to focus on it just a little bit more, since it’s an afternoon game, make sure you’re ready to go. I thought we did a pretty good job of starting the game and it just kind of kept rolling, and eventually got the first goal and [then] get the two-goal lead.

On the defensemen logging extra minutes tonight, after Maatta left the game
It falls on the other five d-men, I thought they did a great job. I think the guys up front, they kind of made sure that we didn’t get them stuck out there for too long, so they had a few longer shifts. At the end of the day, you want to make sure that we’re helping them out as much as we can and just kind of go from there.

On the team’s game management tonight
I think that was good today, that was a big focus coming in. I don’t think they got too many chances off of our mistakes. Obviously, we gave up a goal off of our mistake, but we’ll learn from that and we’ll try to cut them down as much as we can.

On his approach to killing off a 5-on-3
First and foremost, try to win a faceoff, that didn’t happen tonight, and then just try to get in as many shooting lanes as possible. Try to track the puck, not get tied up, try to keep the triangle as tight as you possibly can. I thought we did a really good job, not giving one up.

On setting the tone from the start tonight, playing their game in the first period
Yeah, it felt a little bit different on the bench tonight. In the start the other night, I think we waited for something to happen, it did, and then we got going again, we tied it up and then we waited again. Tonight was different, and I thought we played a really good 40 minutes and then we knew their push was coming. They’re top of the league for a reason, and they threw everything they had at us. 5-on-3’s, a lot of momentum is gained when you’re playing in the other team’s zone like that. For the most part, it was a real good team game. All four lines, five defensemen, certainly the goaltender participated. It’s nice to win that group game rather than an individual game sometimes.

On the team’s five defensemen, and Matt Roy’s game specifically, after earning a new contract
First of all his game tonight was very good, all five defensemen were put in a tough spot, to play against a bigger, heavier team, a very skilled team like that from basically 18 minutes left in the first period on. It’s taxing, but they played very solid, they made a lot of simple plays, we were much better around our net for secondary chances and Matt Roy was a big part of it. As far as his extension, he deserves every little bit of it. We have a ton of confidence in him, I think he feels comfortable here with the group and much like Walker, they’ll have an opportunity to grow and get better as the team gets better. With the reward now comes a lot more responsibility and that’s a part of becoming a veteran in the league. As you move up in contract years, you also move up in responsibility years and we will expect more from him, we’ll expect more from Walker and anybody else who continues to grow with our organization.

On the team’s success in the second game of two-game sets this season
A lot of these series are like playoff series, you get a jump on a team and maybe you take your foot off the gas if you won the first, I know it’s happening around the league a fair amount. It also gives us a chance to point out some strengths and weaknesses in game one and make adjustments as we go. The things we focused on, we did a better job of tonight, and it helped us with the victory.

On managing 25 games in 48 days, and if he feels a need to manage the minutes of veterans like Kopitar and Doughty
Yes and no. Not necessarily in the games, they’ve played those minutes before, it’s on the off days, the practice days. I think I’ve mentioned this [recently] we’re almost two separate teams right now. We have a group that doesn’t need to physically practice, they need to mentally practice and be prepared to make adjustments, just keep their legs and lungs clean. Then, we have other players, taxi squad, guys that are in and out, that really need to practice. It makes for a really, really odd season, especially with half of the season left, but that’s just the way it is. I’m not too concerned about the older players not skating a lot. They’re smart, they’re experienced, they’re able to visually see it and make adjustments. The young guys still have some legs that aren’t playing a lot, they’ve got to work on their skills and be prepared to play

* McLellan also indicated that Olli Maatta was banged up on a check early in the game. He did not have an update on Maatta’s status following tonight’s game.

– With a multi-point effort today, Anze Kopitar now has points in ten of his last eleven games, the last ten games the Kings have scored a goal. At the time of LA’s second goal, Kopitar had collected a point on 16 of the last 30 Kings goals in an 11-game span
– With the second assist, Kopitar passed Bobby Orr for 69th place on the all-time NHL assists list.
– Forward Dustin Brown collected his 14th goal of the season, his eighth power-play goal, with a second-period tally. Brown is now tied for third in the NHL in PPG’s so far this season.
– Defenseman Sean Walker scored his first goal of the season, with the game-opening goal, the first goal by a defenseman that is not Drew Doughty or Kurtis MacDermid this season.
– With 41 saves tonight, Cal Petersen improved to 3-1-0, with a .941 save percentage from five career games played against Vegas. Tonight was the sixth time this season, and the third time in his last four games, that Petersen has faced 40 or more shots.
– The Kings were perfect on the penalty kill for the seventh-straight game, killing off all four of the Golden Knights’ power-play chances, including a 5-on-3. This season, the Kings are 74-for-87 on the penalty kill, ranking fourth in the NHL in PK percentage (85.1%).
– With a power-play goal tonight, the Kings moved to 26.0% on the season, ranking sixth in the NHL. Their 27 power-play tallies this season rank fifth leaguewide.

The Kings are scheduled to play the San Jose Sharks at SAP Center tomorrow evening, with puck drop slated for 7:30 PM.