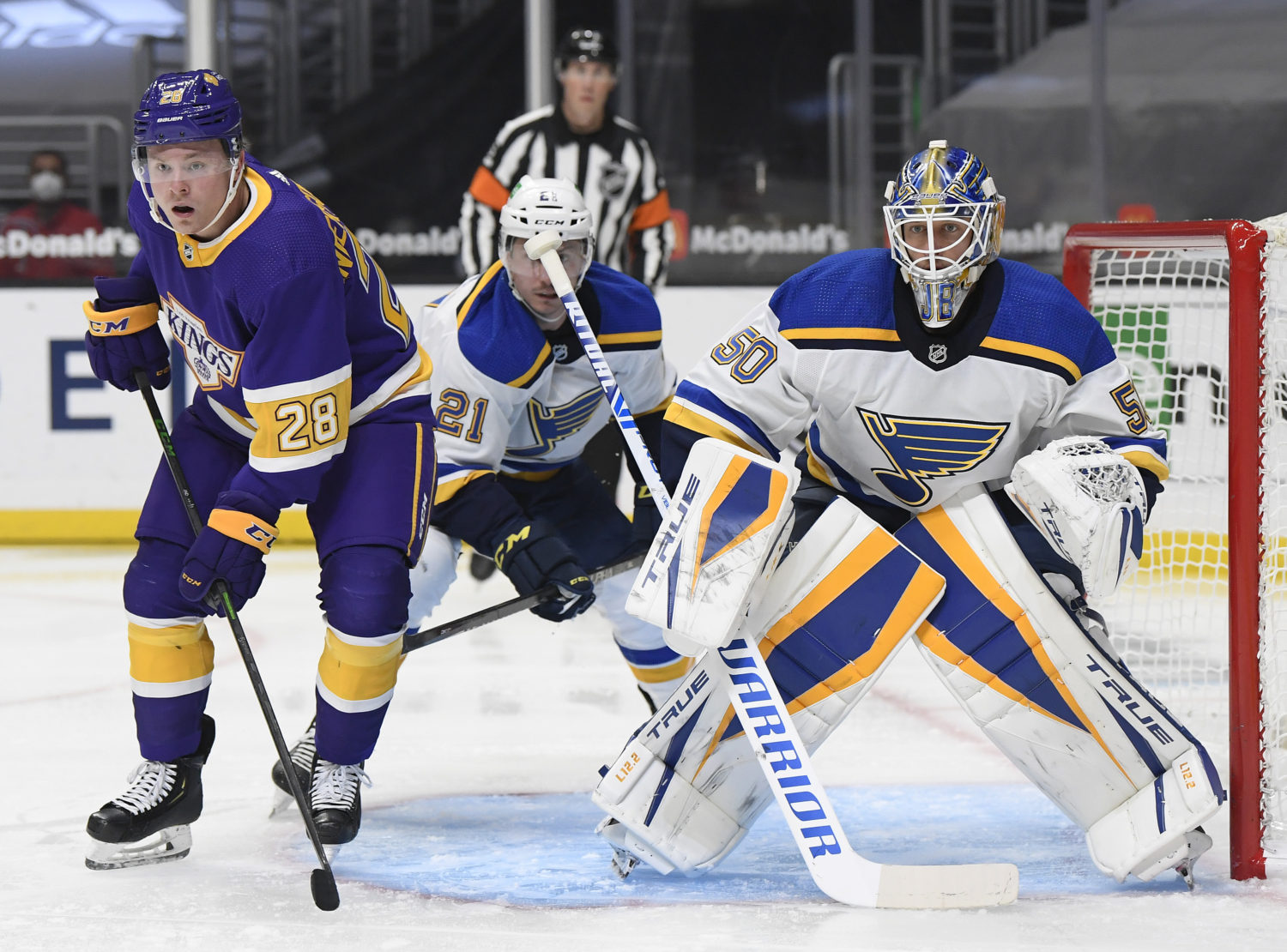 The LA Kings struck early, they struck often, and a team that has struggled to get out in front early in games this season ended the opening 20 minutes with a three-goal advantage.

Part of it was an early power play, earned by Matt Luff, which resulted in Drew Doughty’s fifth power-play goal of the season, second-best amongst defensemen in the NHL. Part of it was the hard work of the Carl Grundstrom – Jaret Anderson-Dolan – Trevor Moore line, which looked less like a line that hasn’t played together since January 22 and more like the line that thrived in a small sample size earlier this season. Grundstrom and Moore scored, with Anderson-Dolan tallying two assists in his first game back from injured reserve.

The Blues struck back with one in the second, courtesy of a Mike Hoffman shot through traffic to make it a two-goal lead after 40 minutes. St. Louis pushed back in the second, but generally, the Kings were able to hold tough and fend it off.

The third period featured a couple of nice stops from Petersen, but at the same time, a lot of nothing in front of him. The Kings have surrendered leads at points in this season that they would like to have back, and in this case, a lot of nothing is a good thing. The Kings didn’t sit back and absorb pressure in the final period, but closed the game out. Those are two different things, and the latter is something the team can take some pride in from tonight.

With the 4-1 victory Kings sit two games above .500 as we hit the halfway mark of the season, and are now 5-1-1 against the St. Louis Blues, the team that now sits three points in front of them in the West Division Standings.

On how he felt in his return to the lineup tonight
I felt good. I just tried to get the physical part out of the way, throw a couple of hits, just kind of get your timing back. You can’t really simulate that in practice, or anything, so I felt pretty good for being out for a while, but I definitely have a lot of room for improvement to get back to where I want to be.

On what has clicked between he, Moore and Grundstrom in the offensive zone
Honestly I’m not really sure, I think it’s just a good combination of players that play similar games. We can all skate, and are willing to get in on the forecheck, that’s kind of been our bread and butter since we’ve been together. It’s working, so we’re not looking to change anything. Just keep rolling with it and continue to grow as a line and as a team.

On the frustration of not getting back on Monday, but getting a couple of extra games to get back, considering the game cancellation
A little bit frustrating, but I just tried to take the positives. That game getting cancelled gave me a couple of extra days of full practice with the team to get my legs back and my timing back. I thought that helped me a bit tonight, getting back in there. Little bit frustrating, you want to get back in as soon as you can, but I just try to take the positives, and it’s not really something I can control, so not really any point in stressing about it.

On things he did during his time out of the lineup
Just watching video of the games I played there, just to stay engaged. Obviously, watching our games, but looking back at the games that I was playing in, what was allowing me to be effective. It was more just to stay engaged and keep me occupied during that time off.

On if there is a common thread between the wins versus St. Louis this season
I think that we respect them enough that we really rise to the occasion. We have checked well against this team, our special teams seem to get us one more than they get a night, which really helps, and we’ve got outstanding goaltending in all of the matches that we’ve played against them. I don’t think there’s anything particular that we’re doing or they’re doing.

On Anderson-Dolan returning, and his line
Sometimes things work with combinations of players. I thought Grundstrom played one of his better games in a long time tonight, Mooresy’s played quite well. They compliment each other, they have a tenacity, yet a calmness to them that allows them to keep plays alive in the offensive zone. All three of them are fairly well-conditioned, so they can extend shifts a little bit, and it’s just working for them right now. Obviously, JAD’s a real important piece there. They get some confidence when he goes back with them, so we’ll ride that line for as long as we possibly can.

On the importance of winning the faceoff battle tonight
It was a focus of ours, we know that they’re a really good faceoff team. With them getting Bozak back tonight, O’Reilly, Schenn, Bozak, even Sundqvist, Joshua, when they’re winning faceoffs, they can start with the puck an awful lot. We really emphasized that. Not only the centermen, ours and theirs, but the people on the perimeter, jumping inside and trying to come up with loose stuff so we can have the puck a little more than they did. Our group did a good job of it.

On the team getting some rest, getting healthy, into tonight’s game
Yeah….the Colorado trip, it was hard on us. A lot of things happened on that trip, with illness, the storm, us not playing very well in game one, to having to react in game two, playing a little bit better but losing both games, then spending the extra day there didn’t help. I thought our leaders did a tremendous job. We actually skated yesterday, they came to us and wanted to skate. It was a scheduled day off, we’ll have to make it up at some point, but they came to the coaching staff and said we need to skate, we want to clean our legs out, led by Kopi, but supported by the team as a whole. We had a 10-15 minute skate yesterday which I think was a real good decision on their behalf. They owned that skate yesterday, it was a really good skate for us and I thought it carried over into tonight.

On playing with a lead tonight, and the team’s play over the last 40 minutes
A couple things, I think it’s good for us to play with a lead sometimes. Let’s face it, over the last year and a half, it hasn’t happened enough. It’s starting to, but a three-goal lead is a dangerous one. You can get casual quick, you begin to get away from your game, which I thought we did a little bit in the second period. The break helped us refocus on what our tasks were as a line, and we began to play more like we needed to in the third. Great experience for us, something we need to do more often, it’d be great to have more 3-0 leads. I thought in the third especially we handled it well, in the second, it got away on us a little bit.

– The Kings allowed three shots on goal in the first period, tying a season-low for shots allowed in a single period (2/16 vs. MIN, 1st Period).
– The Kings were perfect on the penalty kill for the fifth-straight game, killing off the Blues’ lone power-play chance. This season, the Kings are 68-for-81 (84.0%), tied for seventh-best in the NHL. They have only allowed 13 opponent power-play goals this season, tied for fourth-least in the league
– Forward Jaret Anderson-Dolan collected two assists in a game for the first time in his NHL career, as he tallied his third career multi-point game, all coming in his most recent four games played.
– Drew Doughty claimed sole possession of second place in the NHL amongst defensemen with his fifth power-play goal of the season. Amongst defensemen, Doughty ranks second in power-play points, tied for fourth in goals in total this season with seven, and is sixth with 24 points.
– Courtesy of a first-period assist and an empty-net goal in the third period, Anze Kopitar now has points in eight of his last nine games, with 13 points in total (4-9-13) during that stretch.
– Trevor Moore scored his first goal since February 20 in Arizona, while Carl Grundstrom scored his first goal since February 11.
– Goaltender Cal Petersen collected the first assist of his professional career tonight, with the primary helper on Anze Kopitar’s empty-net goal.

The Kings are scheduled to practice tomorrow at Toyota Sports Performance Center at 11 AM.