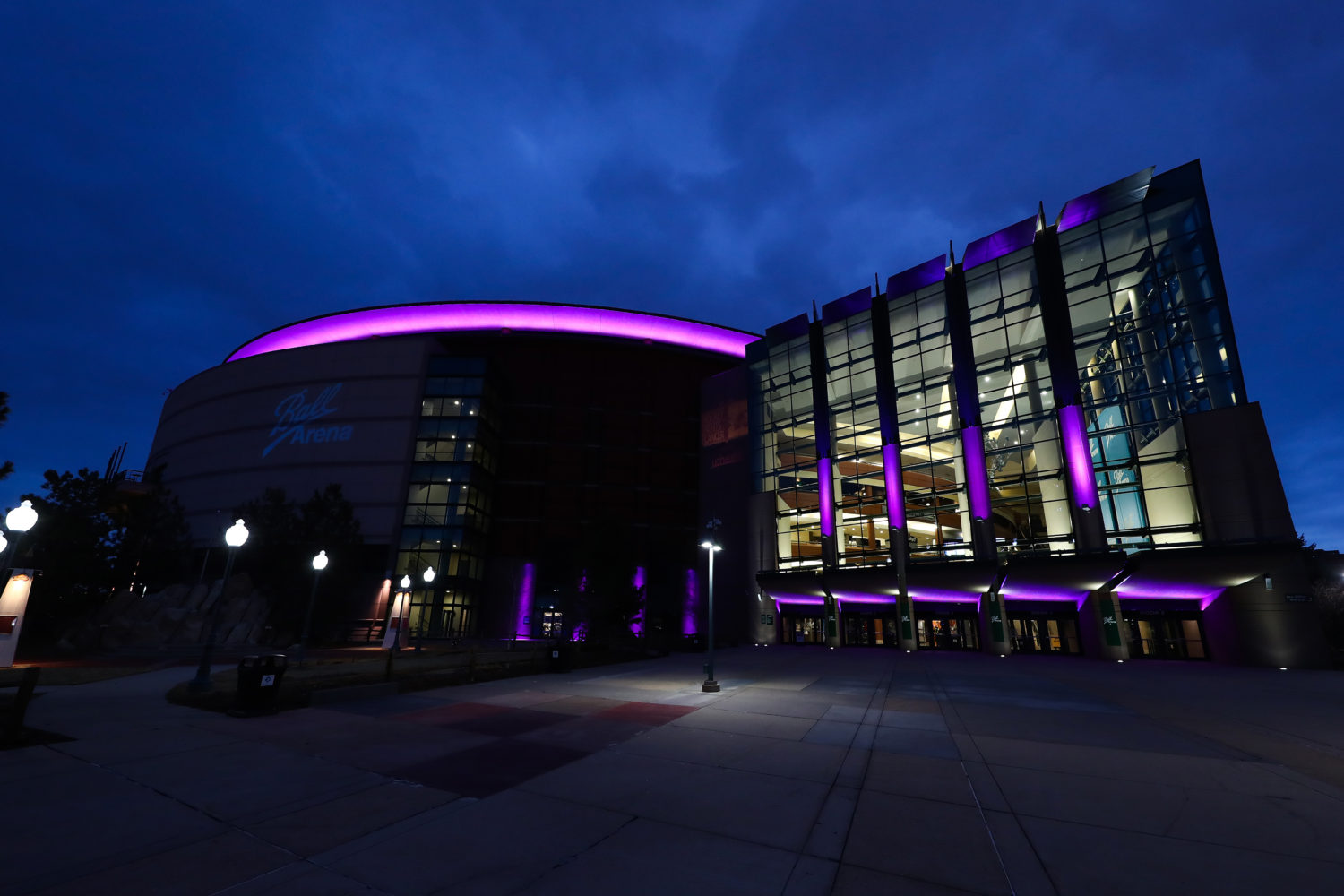 In a precautionary move, the LA Kings cancelled their team practice, which was scheduled for noon today in Colorado.

Todd McLellan spoke with media this afternoon, and said that while he does not believe it to be COVID-related, there is an “illness” that is spreading around the group a bit. It’s the illness that kept Alex Iafallo out of the lineup last night, and McLellan said that others experienced similar symptoms this morning, leading to the change in plans.

“Our team right now is going through an illness, we don’t believe it’s COVID-related, it’s just winter-related,” McLellan said. “Obviously those two players didn’t play yesterday, Olli and Alex. Alex seems to be a bit bitter, Olli not, but now there’s a group of other players who woke up not feeling real good. Out of precautions, again, we don’t believe it is COVID-related, just flu and all the other stuff we never talk about anymore, we didn’t practice today.”

McLellan referenced Alex Iafallo and Olli Maatta, who both did not play yesterday. Iafallo was deemed out with an illness, while Maatta was added to the NHL’s COVID-19 Protocol list.

In lieu of holding a team skate today, the Kings made the decision to keep the players away from one another, to help reduce risks of a potential increased spread. The team is scheduled to play Colorado tomorrow at 2:30 PM Pacific time, before returning home to host St. Louis on Monday.

“We kept everybody away from each other and we’ll play tomorrow without a pre-game skate, that’s all we can do,” McLellan added. “We’re dealing with a different circumstance.”

McLellan did not offer a particular list of names of additional players who were not feeling right this morning. When asked about potential implications for tomorrow’s lineup, related to if he has the same group available to him, or if he expects to make any changes, McLellan said that it’s just too early to tell at this point.

In addition to the 20 individuals who dressed last night, plus Iafallo and Maatta, the Kings also have forwards Lias Andersson and Drake Rymsha, defenseman Daniel Brickley and goaltender Matthew Villalta on the trip, as well as forward Jaret Anderson-Dolan, who is on injured reserve.

Until tomorrow, we wait. 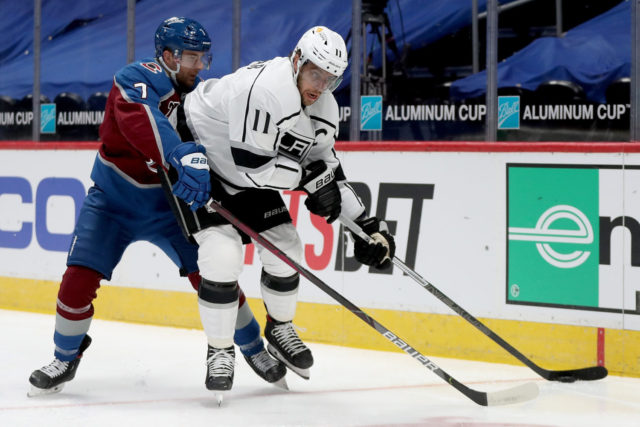 DENVER, COLORADO – MARCH 12: Devon Toews #7 of the Colorado Avalanche fights for the puck with Anze Kopitar #11 of the Los Angeles Kings in the first period at Ball Arena on March 12, 2021 in Denver, Colorado. (Photo by Matthew Stockman/Getty Images)

Looking at last night’s game against Colorado, and the impending rematch tomorrow, McLellan reinforced today that he was not happy with a number of the things that the Kings did last night, but as he touched on after yesterday’s game, reinforced that also you need to give Colorado their due, for the way that they played.

“I could start pointing fingers at our guys for playing poorly, not having legs, poor passing, execution, I could go on and on, but that would discredit a team that played an extremely good game, and that would be the Avalanche,” he said. “They’ve done that to a number of teams in the last week to 10 days, where they just take over the game, and we didn’t have an answer for it. We’ll be better tomorrow.”

McLellan went on to agree that the game Colorado played last night was the best game a team has played against the Kings all season.

Anze Kopitar also spoke today and said that the mood amongst the group was not good after yesterday’s game. To a man, he felt the Kings knew that they need to be better than they were on night one in Colorado, and like McLellan, he feels that they will be tomorrow afternoon.

“The vibe wasn’t good at all,” he said. “I don’t think you have to be a hockey expert to see what was really going on last night. We realized that wasn’t the game. Outside of Cal, I don’t think anybody was, or should be, satisfied with their game. We’ll correct that tomorrow.”

One area in which Colorado played to their statistics was on the penalty kill.

There’s the same two sides that we had at even strength.

On one hand, McLellan said that the team’s struggles while playing 5-on-5 carried over to the power play

“I think the answer to that is we weren’t very good,” he said, when asked about the situation last night. “When you aren’t good 5-on-5, your passing is off, you’ve got sluggish legs, I don’t think you can expect your power play to be very good either. It wasn’t very desperate until the last one, when we did establish a faceoff win and got some possession.”

The Kings had four power-play opportunities, but weren’t able to get anything going until the fourth one, which came late in the third period.

The Avalanche rank third in the NHL in penalty-killing percentage, and just one team has allowed fewer power-play goals this season. Colorado consistently frustrated the Kings as they attempted to enter the offensive zone, and furthermore as they tried to get their power-play setup.

“They’re a very good penalty killing team,” McLellan added. “Much like their 5-on-5 game, they know their kill points, they know where everybody is going at any given time, they’re quick to close, they bear down on their clears. I could keep describing them, but all it’s going to come out sounding like is a top-five penalty kill in the league and that’s exactly what they are.”

The Kings will not hold a morning skate tomorrow, considering the earlier puck drop, scheduled now for 2:30 PM Pacific Time.

On the Ontario Reign front –

Not only did the team get two goals from Arthur Kaliyev in a 5-3 win over Tucson, their second of the season, but they’ve added a Stanley Cup Champion, and a familiar face to those in the Pacific Division, in forward Devante Smith-Pelly.

Smith-Pelly, 28, was originally selected by the Anaheim Ducks in the second round (42nd overall) in the 2010 NHL Entry Draft. The Scarborough, Ontario native has appeared in 395 NHL games totaling 101 points (44-57=101) between the Ducks, Montreal Canadiens, New Jersey Devils and Washington Capitals. He has also played in 144 games at the AHL level where he recorded 90 points (47-43=90). 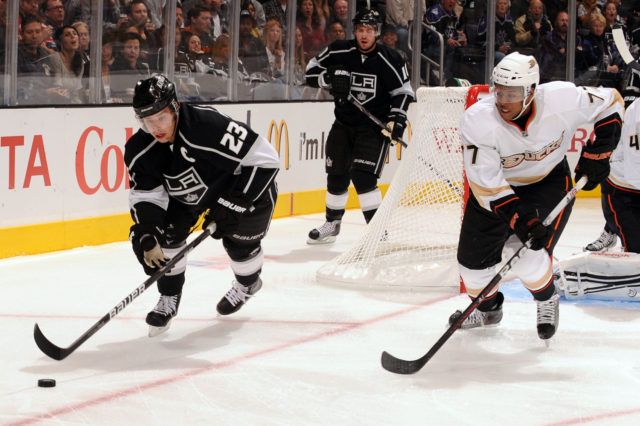