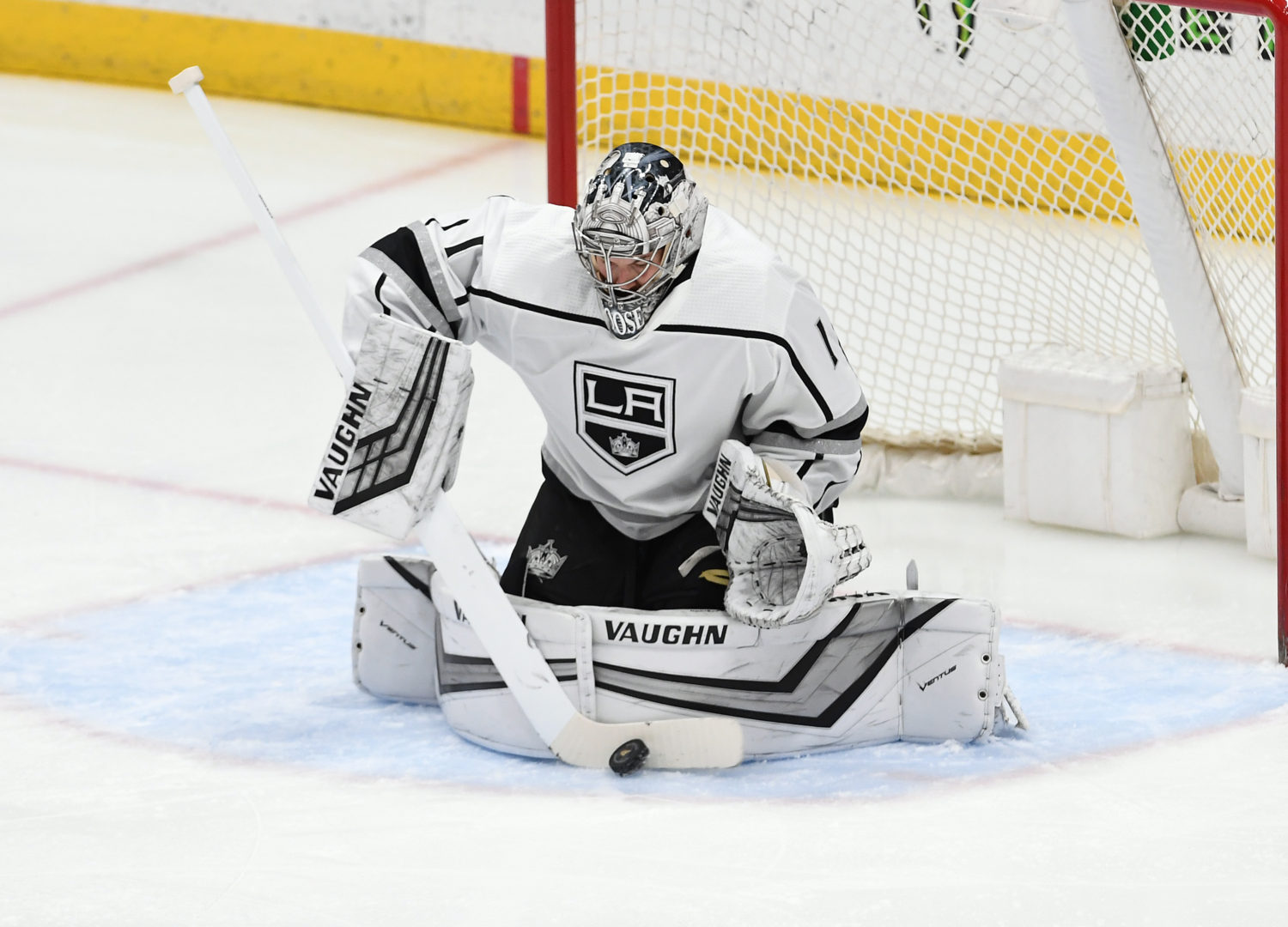 The LA Kings scored an early goal, their first, first goal in seven games, and never looked back, in a convincing 5-1 victory over the Anaheim Ducks.

Starting his first game NHL in more than 2,300 days, Troy Grosenick made 33 saves, as he earned his first NHL victory since November 16, 2014, when he was a member of Todd McLellan’s San Jose Sharks. Grosenick’s Kings debut was perhaps the central storyline, on an evening when many others turned in great nights.

Forward Adrian Kempe collected two goals, as he followed up his hat trick with another multi-point game. Anze Kopitar and Drew Doughty each had two points, until one was removed from each, as both moved to within one point of the NHL lead for their respective positions in power-play points. The Kings scored twice on the man advantage tonight, giving them goals in six straight games, with nine total tallies over that span.

The Kings struck first and took a lead they did not relinquish. Kempe’s first goal came just 3:46 into the game, on the power play, as the Kings took a lead into the first intermission for the sixth time this season. Kopitar tallied early in the second on the man advantage, followed by Kempe’s second of the night at even strength.

Forwards Andreas Athanasiou and Alex Iafallo scored insurance markers in the third, as the Kings held on behind Grosenick, who did everything that was asked of him in tonight’s victory, and then some.

With the victory, the Kings move to three games over .500 on the season, with points in four straight games.

Hear from Grosenick and McLellan after tonight’s game.

On Troy Grosenick’s performance, especially considering the circumstances
When we signed him in the summer, we were excited about having him. I was lucky enough to spend some time with him in San Jose, he’s got a lot of character, he just wanted an opportunity to get a game in here or there. Tonight, it presented itself and he took advantage of it. Really good for him and the guys played hard for him. I think it was a bit of a motivating factor, to get off to a better start. He made a save pretty early in the game, they made a pass out from behind the net, he made a save there, and after that he just settled in. It was good to see and certainly not easy circumstances. For as little as he’s played this season, with all his travels and quarantine, good for him.

On if he feels that a team playing behind a new goaltender can tighten up the defense
I think that’s accurate. I think, a lot of times, teams play with a goaltender or for a goaltender, and I think it’s more valuable when they play for a goaltender. Tonight, I think we played for him, and tightened it up a bit. It wasn’t mistake free, but that’s an impossible game. When we did break down, he made some nice saves.

On getting the win in regulation tonight
It’s nice to be able to play with a lead. I think you learn a lot about some of your players when games are tight, or you’re in overtime, but you also learn a lot about your players when you’re up four or five one. Do they get loose, do they get casual, can they check in those situations? For the most part, a lot of our guys passed that test tonight.

On Andreas Athanasiou, and his performance versus expectations
We expected to get a hungry player, I think I used those words when we signed him. I thought we’d have a really motivated young man that wanted to prove to himself and to the hockey world that he wasn’t a one-hit wonder, that he was able to come in and do what he’s done in the past. We were prepared to give him the opportunity, and it was up to him to take advantage of it. Offensively, we’ve seen great flashes from him. His speed and his elusiveness have been effective for us in those situations, and we’re working on the checking part. He’s beginning to value it more, and I feel more and more comfortable about playing him in checking situations. That’s going to continue to grow, where we trust him all over the rink. When he gets that, he’s really going to be a factor.

– With the victory tonight, goaltender Troy Grosenick earned his first NHL win since November 16, 2014. Grosenick went 2,305 days in between NHL victories, as he made 33 saves on 34 shots tonight.
– Forward Adrian Kempe now has seven goals over his last six games played, and five goals over his last two games, with a multi-goal game tonight.
– With his 11th power-play point of the season, Kempe has set a new NHL career-high, surpassing his previous total (10, 2019-20) in 44 fewer games.
– With a goal tonight, Anze Kopitar extended his scoring streak to six games, his second 5+ game scoring streak of the season. With his point coming on the power play, Kopitar ranks second, one point behind Connor McDavid, for the NHL lead in power-play points.
– One night after he collected his 400th career NHL assist, defenseman Drew Doughty collected another primary helper, on the power play. Doughty is one point shy of the NHL lead amongst defensemen with 14 power-play points and is tied for fourth in the NHL, amongst defensemen, with 22 total points (6-16-22) this season.
– With assists on Kempe’s second goal, forwards Blake Lizotte and Trevor Moore have each collected assists in back-to-back games.
– The Kings have now scored a power-play goal in six straight games, with nine total goals over that stretch.
– Tonight marked the eighth time in 25 games played this season that the Kings scored first, and the fifth time that the Kings have led through 20 minutes.