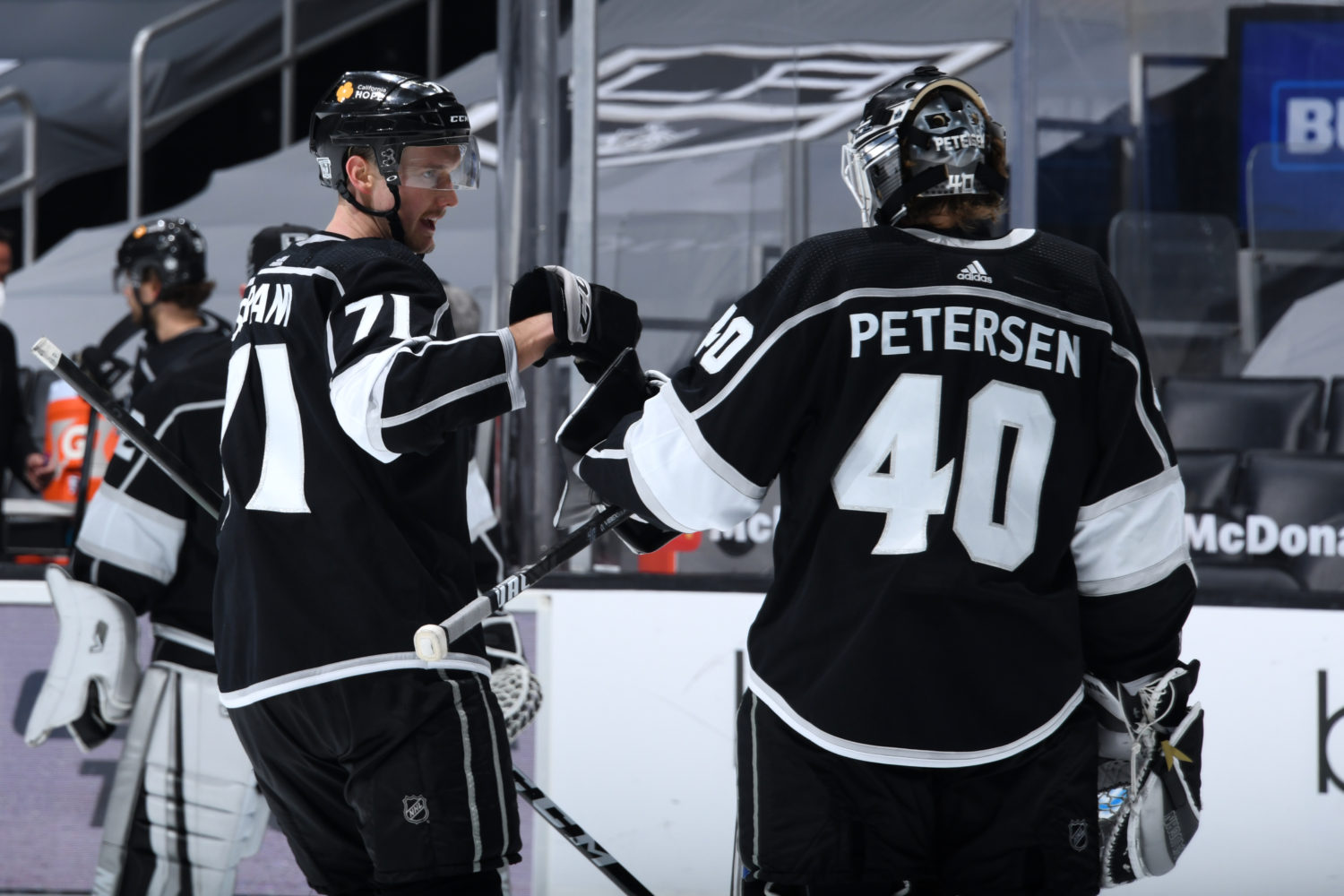 The Kings scored the first three goals, and the last three goals, of tonight’s game as the team skated to a commanding 6-2 victory over the San Jose Sharks. The victory gives the Kings three points of a possible four from a two-game set against San Jose and snaps a five-game losing streak in the process.

After struggling off the start over the last few games, the Kings came out on a mission, with three goals in the game’s first 13 minutes, as they scored three times in the first period for the first time this season.

Though they conceded one late in the first, and another late in the second, the Kings played perhaps their best period of the evening in the middle stanza, though the scoreline read 1-0 San Jose. The team was aggressive on the forecheck, not only forcing turnovers, but creating scoring chances off of those turnovers.

The power-play took over in the third, as Alex Iafallo and Jeff Carter each collected PPG’s to put the game away late. Drew Doughty led the way in the points column with three assists, while Jaret Anderson-Dolan (1-1-2), Carl Grundstrom (1-1-2) and Anze Kopitar (1-1-2) each had multi-point nights. On the backend, defensemen Tobias Bjornfot and Austin Strand each tallied their first career NHL assists. Cal Petersen was stout again between the pipes, with 29 saves on 31 shots faced.

It was hard to find too much not to like in that win, and now the Kings will have an extended stretch without games, with no games on the schedule until Tuesday against Minnesota.

On the team’s forecheck tonight
We definitely made a lot of adjustments off of the last game, keeping things a lot more simple, and you could tell we were just winning those puck battles that the other night we weren’t coming up with. We were working the other night, but I think we were working a little bit smarter tonight, winning those puck battles off the forecheck instead of just allowing them to come out easy and it shows up on the scoreboard when you’re doing things right like that.

On his goal in the third period
It’s just doing what our line’s been doing. It starts with the forecheck, a great play by Grundy to get it out in front to Moorsey, and that’s just an unbelievable pass. Nobody in this league is going to miss that one, so it was just a great play by those guys and I was lucky enough to be the beneficiary of it.

On a total team effort in tonight’s win
We know that it took all four lines tonight, every line contributed. The guys that have been sitting out for a little bit, they came in and made an impact. Our young d-core back there, with Toby stepping in and Strander’s been playing unbelievable, so just a great team effort tonight and it showed up on the scoreboard.

On being back in the NHL, and his first career NHL assist
Yeah, I just wanted to enjoy the moment. If I’m good out there, and in the system…it was a long shift, and I was gassed but then I saw Wags out of the box, just tried to pass it to him.

On the biggest differences between the AHL and the NHL
I think in the AHL, with all the prospects coming up…there’s much more structure up here and I think it’s kind of weird to say, but it’s sometimes a little bit faster in the AHL. Here, you can make plays, you play with better players here, but I think that’s what’s most different

On staying engaged throughout the season, while not playing in NHL games
I think it was good, coming from World Juniors, having to quarantine for a while, then getting in shape and practicing with the Kings and playing some games with Ontario, I think it was good for me. It’s just nice to be back.

On coaching with a four-goal lead down the stretch
I can’t remember doing that in a long time. We’re so accustomed to playing one-goal games, you don’t get the freedom to play out a lot of nights, but we earned the opportunity to do it tonight, and the best thing about the last nine minutes was how we played it. We didn’t get cute, we didn’t get lazy, we didn’t get sloppy, we played the right way, so that was rewarding for the group as a whole.

On the dominant stretch in the second period, and if that’s how he wants the team to play
Of course. Structurally, we played well, everybody was important, we had the opportunity to roll four lines. I thought we played aggressively, we kept plays alive. If you look at the Anderson-Dolan line, they were effective in the first game forechecking, but they didn’t keep much alive. Today, they kept plays alive in the offensive zone, they were rewarded twice. When you can effectively use four lines and six defensemen, and they feel confident, it makes a world of difference.

On the team’s effectiveness on the forecheck tonight
They put a lot of work into it, and we haven’t seen it a lot this year, we’ve been more on the receiving end. Tonight, we were able to use it and create against a pretty good breakout team, they have a lot of rehearsed breakouts, but we created opportunities for ourselves and we found a way to finish them too, in and around the net. That was nice to see.

On the importance of the veterans leading vocally before tonight’s game
I think it’s essential, good teams have that. I don’t think we have a shortage of leadership in any way, shape or form, in fact, I think we have an overabundance in those five veterans that we have here. They’re quality human beings, they work their butts off in practice, there’s nobody cheating the team or the game. All of those things are very comforting when you come to the rink. The words they use in the locker room are really important, but good leadership has to have good followers and when the younger players are listening and learning, that’s just as valuable as the good leadership and tonight it was a combination of everybody.

– Forward Anze Kopitar now has goals in three consecutive games, and points in four straight games. Kopitar leads all West Division players with 17 points (4-13-17) this season.
– Defenseman Drew Doughty tallied a season-high three points tonight (0-3-3). Doughty now has 11 points (3-8-11) on the season, tied for seventh amongst NHL defensemen this season.
– Forwards Jaret Anderson-Dolan (1-1-2) and Carl Grundstrom (1-1-2) collected the first multi-point games of their respective NHL careers
– Defenseman Tobias Bjornfot, in his season debut tonight, collected his first career NHL assist with the lone helper on Austin Wagner’s first-period goal. Bjornfot played in his fourth-career NHL game and skated 18:31 in tonight’s game, including 1:23 on the penalty kill
– With an assist on Carl Grundstrom’s first-period goal, defenseman Austin Strand collected his first career NHL point.
– The Kings scored a season-high three goals in the first period tonight, which matched a season-high for goals in any period. The Kings also scored first for the third time in 13 games this season and led by two goals after 20 minutes for the first time this season.
– The Kings scored three power-play goals for the first time this season, and tied a season-high with six total goals.

The Kings are scheduled for an off-day tomorrow and will return to the ice on Saturday for a 10:30 AM skate at Toyota Sports Performance Center.