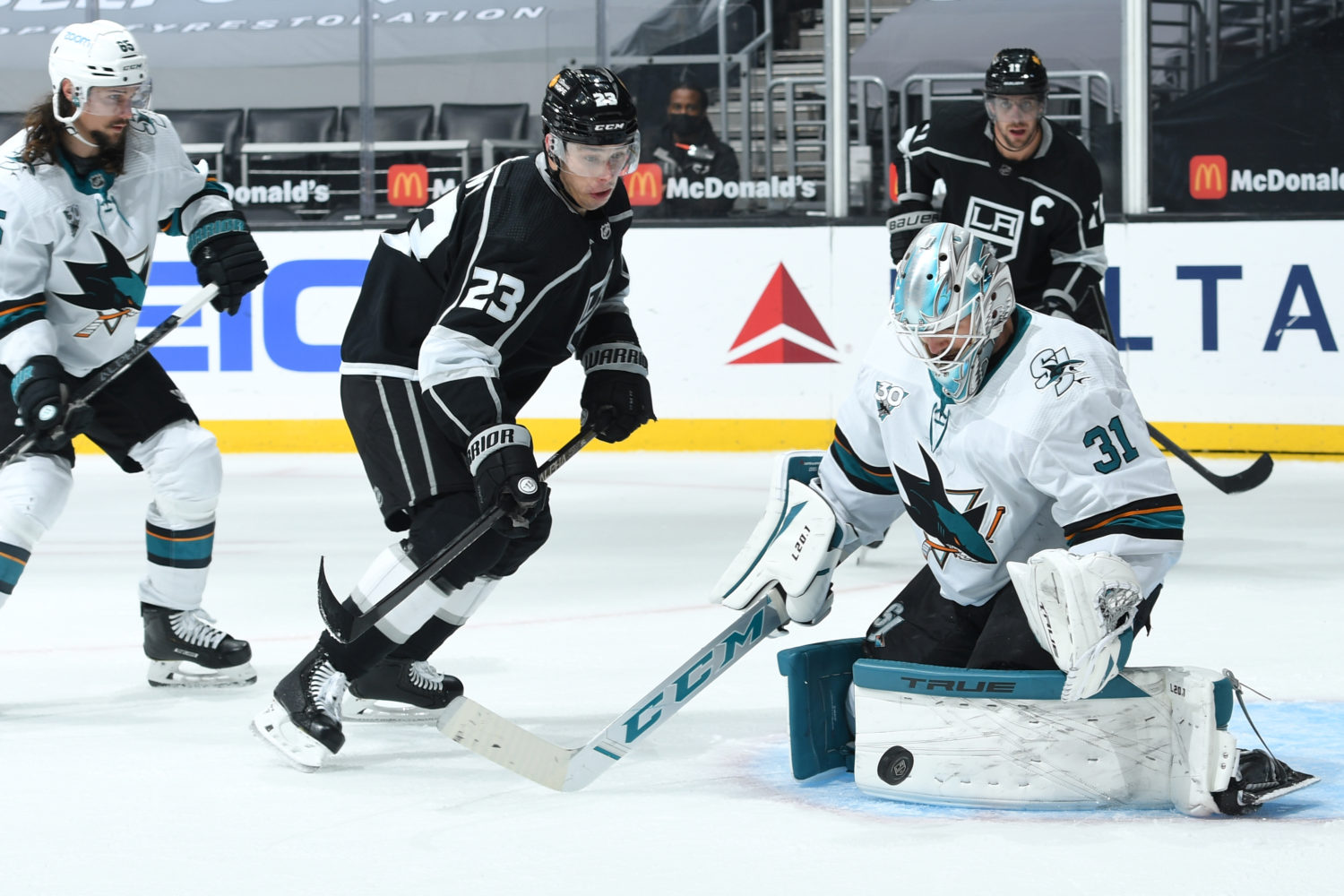 The LA Kings were unable to hold onto a 3-2 lead in the game’s final minute, but if you asked Todd McLellan, he’d say that the Kings lost the game on the first goal they gave up, not the third.

The Kings played pretty good hockey for 45 minutes of tonight’s shootout loss against San Jose, but the 20 in which they did not was the opening 20, which saw them fall two goals down early, including a goal after an extended game-opening shift in the LA defensive end. At one point in the game, the Sharks held a 17-5 lead in shots on goal, until the top line went to work.

The trio of Alex Iafallo – Anze Kopitar – Dustin Brown accounted for all three Kings goals tonight, with Kopitar opening the scoring on a breakaway, and Brown following with a pair of his own tallies, his team-leading fifth and sixth of the season, to turn a 2-0 deficit into a 3-2 lead. Iafallo assisted on two of those goals, to collect a multi-point night of his own.

The Kings lost defenseman Drew Doughty midway through the third period and were forced to rely on a group of five, which consisted of four defensemen with 100 or fewer NHL games played. That group, frankly, played extremely well down the stretch. Kale Clague logged nearly nine minutes in the third period, and more than 11 between the third and overtime, as he went every other shift after Doughty exited the game.

It would have been a huge moment for that group to have been able to pull one out without Doughty, but a late Sharks goal forced overtime, and eventually a shootout, in which Logan Couture scored the only goal, giving the visitors the extra point.

A tough point to take for the Kings.

Hear from Dustin Brown, Mikey Anderson and Todd McLellan below.

On the San Jose forecheck early in the game
Their forecheck was heavy, they were getting pucks behind us and getting our D turned around. We had to chase down pucks and try and break it out. I don’t think we did a good enough job of getting in behind their D, we made it easy for them, quick ups for them or D-to-D and out. I don’t think we had a heavy enough first period, we didn’t make any of them do enough of what we needed to do, and got better as the game went on.

On the improvements made in the final 45 minutes tonight
I think the whole room agreed that the first period wasn’t us at all. We knew there was a lot more in the room for us to bring out there. It’s a good sign, having all those young guys in there, with the older guys leading the way, to be able to come back in a game like that, and to be able to take a lead as the game went on. At the same time, we’ve got to find a way to close out games, what is that the third, fourth game where we’ve given one up at the end there? We’re happy with the comeback, but at the same time, we’ve got to close out some games.

On the young defensemen stepping up in Doughty’s absence
Yeah, we were. That’s a lot of experience that a lot of them probably weren’t going to receive two weeks ago, but they’ve earned the right to play. Guys like Austin Strand have really opened up our eyes, he’s been a pretty good defensemen for us the last three games he’s played. But, it’s a lot to ask of four young guys like that to be put in those situations. They’re only going to be better for it down the line, but right now it stings a little bit. I thought they played their hearts out. They were pretty effective for most of the second half of the game and even the last goal, I don’t think we lost the game because of the empty-net goal, I think we lost the game because of the first goal, and a lot of those young players weren’t on the ice for that.

On if Cal Petersen has earned the “starting” job
We need two to play, and Cal’s been really good. There’s just too much hockey to declare one the leader and one the follower. Quickie had some really good games at the beginning of the season, so we’re going to count on them both.

On the Anderson-Dolan line earning more minutes tonight
That line has been effective since we’ve put them together, all three games. They’ve worked real hard, they’ve been very conscientious defensively, they haven’t given up very much. They play a simple, straightforward game and they deserved to be out there. Their minutes came at the cost of some others that weren’t playing well. We went to three lines in the third period, and they earned the right to be out there.

On what he expects from his veterans, and the leadership they’ve shown
I expect a lot from the veteran players right now, they’ve got to guide the youth through some rocky roads right now. Obviously, we are, like every other team, we’re dealing with injuries, we’re dealing with COVID issues, they have to come to the rink every day and set the tone. Their professionalism is very important. Early energy and dictating the pace of the game, I didn’t think we did a good job of that tonight, but the fact that they were there to lead and get the team focused to get through a bad start, I think was really important. As we move forward, some of that has to rub off on the younger players. As we move down the road here, Gabe Vilardi and players like that are going to become veteran guys that are going to take the reins eventually, and I think they have good leaders right now to watch and learn from.

*McLellan indicated that he did not have an update on Drew Doughty. Doughty blocked a shot in the third period, left the game and did not return.

– With his power-play goal in the second period, Kings forward Dustin Brown is now tied for the NHL lead with five PPG’s on the season
– Brown tallied a season-high two goals and three points tonight. He now has multiple points in three of his last five games played, as he also tallied an assist on Anze Kopitar’s second-period tally
– Kopitar now has goals in back-to-back games, points in three straight games, and leads all players in the West Division with 15 points (3-12-15) this season
– With two assists tonight, forward Alex Iafallo now has ten points (1-9-10) from his last eight games played against the San Jose Sharks.
– Kale Clague logged an NHL career-high 23:12 of ice time in tonight’s defeat, second on the team behind only Mikey Anderson (23:46). Clague played a team-high 8:52 in the third period and 2:46 in overtime.
– Five of the past Kings – Sharks games have gone to overtime, and tonight’s game was the first game that went to a shootout for the Kings this season

The Kings are scheduled for an 11 AM practice tomorrow at Toyota Sports Performance Center.