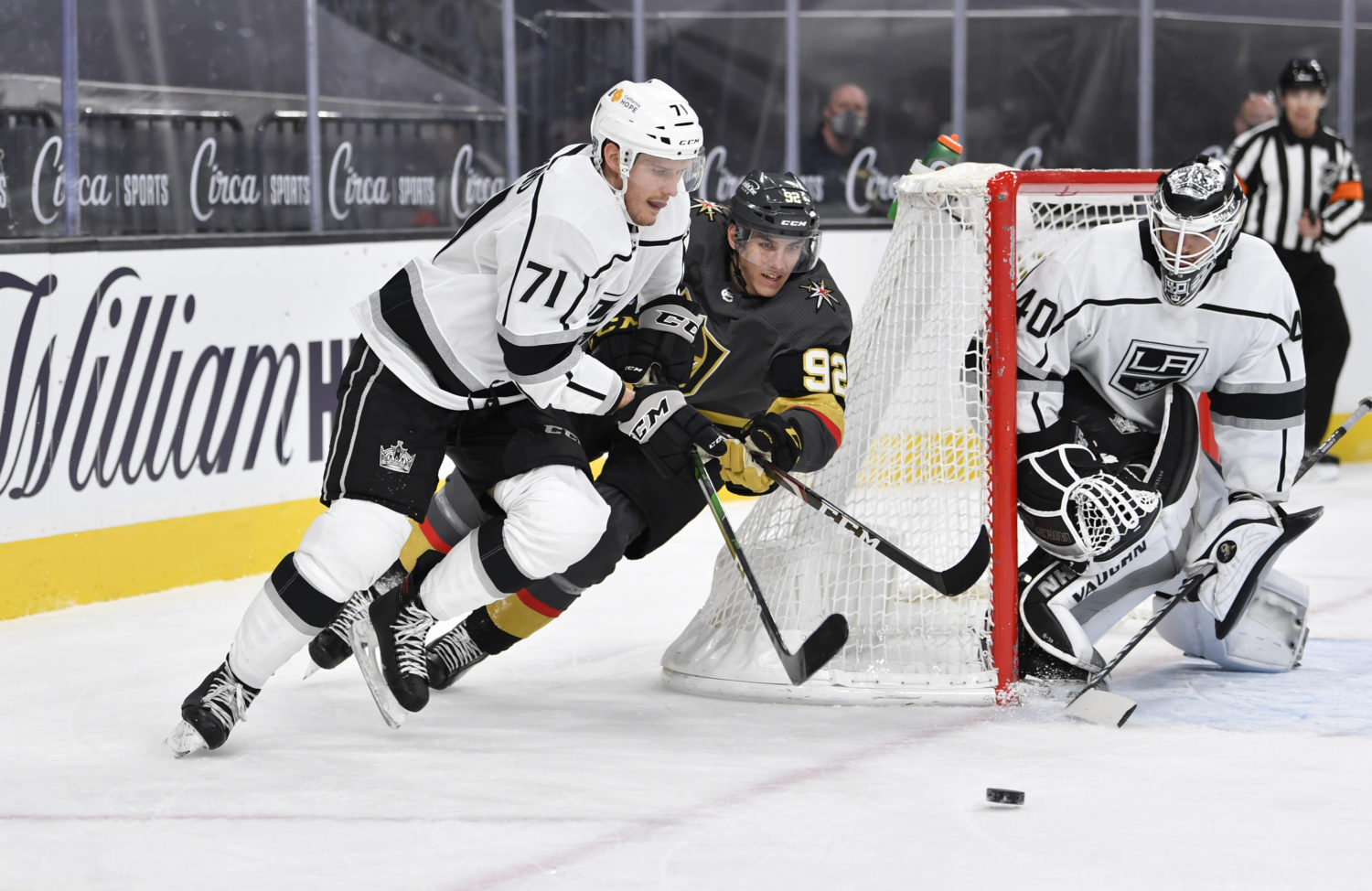 The LA Kings wanted to see spirit and intensity against the Vegas Golden Knights, after a disappointing effort against Anaheim on Tuesday. While those factors were not the issue tonight, an inability to handle the speed of their opposition was, as they fell short in a 5-2 defeat, during the first of two games at T-Mobile Arena.

The first period consisted of odd-man rushes, mostly tilted towards the Los Angeles net, with the Golden Knights striking for three goals in the opening 20 minutes. The three goals against in the opening period came off of a 2-on-1, a 3-on-2, and a breakaway that led to a rebound, all stemming from Vegas’ speed entering the offensive zone.

Vegas struck for two more goals in the middle stanza, one against Jonathan Quick and one against Cal Petersen, who entered in relief when the score reached 4-0. It’d be tough to blame the goaltending on this night, however, with the abundance of odd-man opportunities against especially throughout the first 40 minutes. The energy and intensity did not appear to be lacking in the same way that it was against the Ducks earlier this week, but the Kings were unable to stop the high-flying Vegas Golden Knights.

Los Angeles pulled back two goals in the third period – through Austin Wagner and Dustin Brown – but the outcome remained the same. On a high-note, Brown’s goal was the 100th power-play goal of his NHL career, making him the fifth player in franchise history to hit the mark.

Hear from Anze Kopitar and Todd McLellan below.

On the cause surrounding tonight’s loss
Their speed overwhelmed us, that’s pretty evident. The transition from offense to defense, their defenseman jumping into the rush, our D handling anything outside with any type of pace. We did a poor job, and it took us quite a while to adapt to it, and by then it was too late.

On the team’s intensity and compete tonight
I didn’t mind our compete, and our battle was a lot better today than it was against Anaheim a few days ago. The commitment to playing was good, sometimes you’ve just got to recognize what’s coming at you, know your range as far as pace and footspeed. We made some poor decisions diving in on 50-50 pucks, diving in, and they skated right by us. The other night, we were very upset, all of us, players and coaches, about the effort we put in. Today, we made mistakes, and mistakes are repairable over time. Some of the younger players, who saw the speed coming at them, it was tough. Some of the older players that should have known better also got caught, but we’ll fix it as we go.

On Austin Wagner’s game tonight
It was probably his best game of the season. He was aggressive, he was skating, he drew a penalty, created turnovers on the forecheck. That’s what he needs to be doing, and now we saw where he was last year, hopefully he’s back to stay at that level and that pace, so that’s a positive. There’s some things that we worked on in practice yesterday that I saw appear in the game, which was a real positive sign.

On working in so many younger players into NHL games, when you aren’t winning games
We’ve got to find other ways to recognize their successful shifts, we have to recognize it, acknowledge it, make sure that they know they’re doing things right. We have to make sure that we acknowledge the group as a whole for their effort, they didn’t quit tonight, that was positive, we talked about that between the second and third. Right now, the six, seven defensemen we’re playing, there’s a lot of inexperience back there, and I believe it’s showing. We’ve got to just keep playing them, they’ve got to learn and cut their teeth in the league until we bide time to get a couple of veterans back, you can see the difference that they make. By no means is that putting a spotlight on the young defensemen, and accusing them of having the inability to play, it’s just a tough league to learn on the fly in. When you have one guy doing it, it’s not a bad thing, but when you have 4-5 on the backend, it’s a tough, tough thing. We got better as the night went on, but the start wasn’t where we needed it to be, and hopefully on Sunday it’s better.

*McLellan indicated that Martin Frk left tonight’s game, and estimated that he might be out for a bit, clarifying that it was his own visual, not an update from the team’s medical staff. The team disclosed that Frk suffered a lower-body injury.

– With a power-play goal tonight, Kings forward Dustin Brown became the fifth player in LA Kings history to score 100 career power-play goals. Brown moved into a tie for fourth all-time with Bernie Nicholls on the all-time list.
– Brown also had an assist in the game, giving him a multi-point game for the second time in three games. The 36-year-old forward surpassed Butch Goring for sole possession of seventh place all-time on the Kings scoring list, with 661 career NHL points.
– Defenseman Austin Strand made his NHL debut tonight. The Calgary, AB native played 17:27, and was +1 on the night, as he became the 686th ECHL alum to reach the NHL.
– Forward Austin Wagner scored his first goal of the season in tonight’s defeat.
– With an assist on Wagner’s goal, defenseman Olli Maatta collected his first assist as a member of the LA Kings
– The Kings lost in regulation for just the fourth time in 13 regular-season meetings with Vegas, and just the third time all-time at T-Mobile Arena.
– For the ninth time in the first ten games this season, the Kings conceded the game’s first goal. The Kings have a -10 goal differential in first periods so far this season, the worst in the NHL.

The Kings are scheduled to skate at noon tomorrow at T-Mobile Arena.