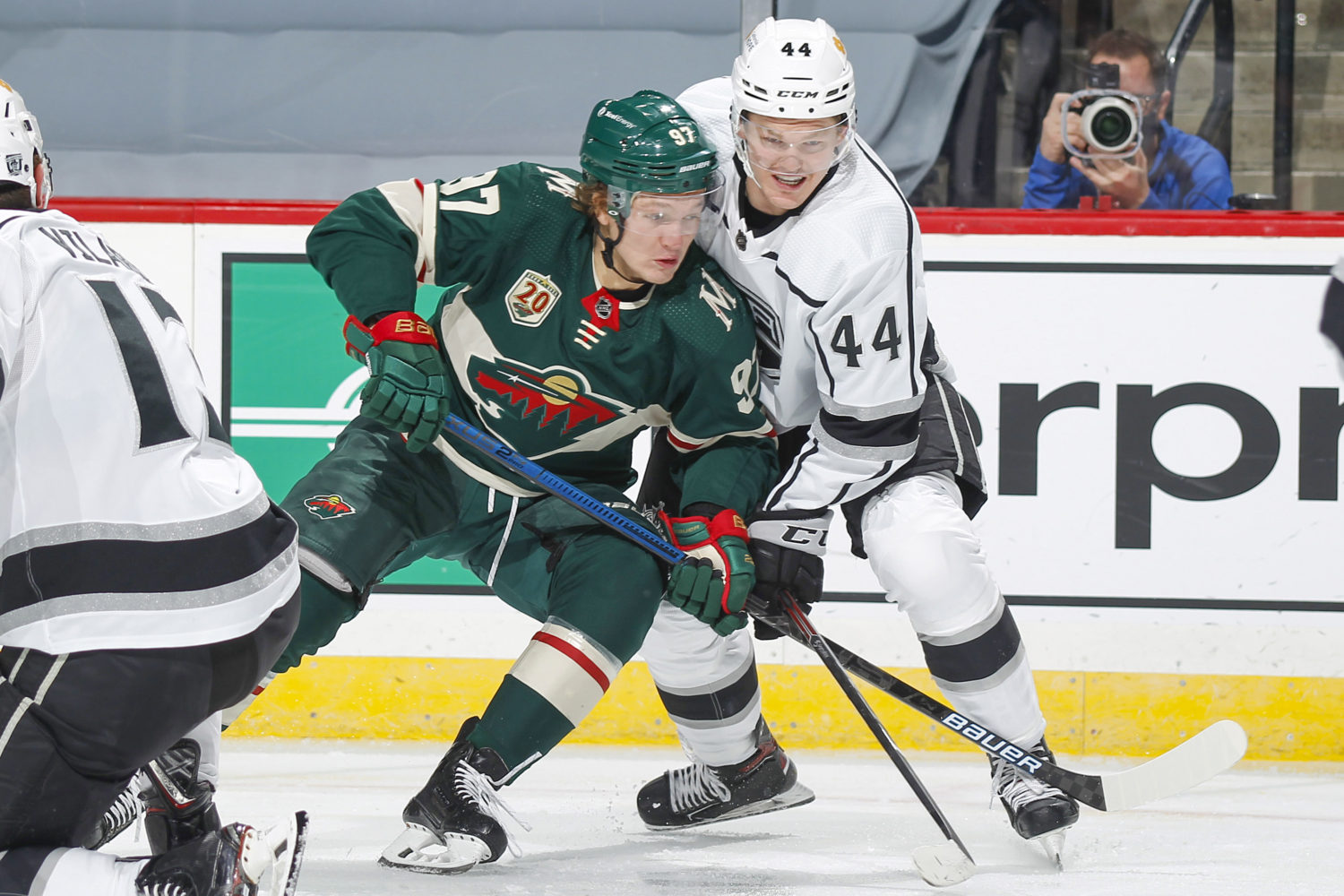 Teammates, roommates and fellow Minnesotans Mikey Anderson and Blake Lizotte have had vastly different NHL homecomings in their home state of Minnesota.

Lizotte, who made the Kings out of training camp last season, returned to Minnesota for an early-season game in October 2019. Though the Kings lost that night, Lizotte – who grew up just under an hour away from Xcel Energy Center – got to live a dream playing in front of so many friends and family.

“It was just fun to have all of my friends and family there,” Lizotte said. “In a non-COVID season, everyone was able to come to the game, and the support from my hometown was pretty cool. Chisago Lakes is fully behind me wherever I go, especially when I’m in Minnesota, I get a lot of people coming to the game. That was the coolest part for me, just seeing all the support from friends, family, people that I grew up with, people from my hometown, it was pretty cool.”

Anderson’s experience on Tuesday was certainly a little bit different.

Due to the restrictions around fans attending games this season, Anderson’s support section was limited to his parents, his sister and his girlfriend, who were graciously accommodated by the Minnesota Wild as a part of their friends and family allotment of just 150 tickets. In the process, they became perhaps the first set of Kings fans in the stands this season.

Though just over a half hour away from Xcel Energy Center, the rest of Anderson’s friends and family in Lakeville, MN were forced to watch on television. It was certainly a different kind of homecoming than Lizotte was able to have 15 months prior, but Anderson understood the situation at hand, and still had a cool experience playing against Minnesota.

“It’s just kind of the way everything is right now,” he said. “The no fans for one, just the way the world is right now, everyone is trying to make the safe call for everyone involved, which is [the right thing to do]. Just being able to play against the Wild is pretty special for me, because growing up that’s the team I watched.”

Perhaps the most difficult part of the situation was being so close to his family, but not able to actually see them.

Before Tuesday’s game, Lizotte talked about how that was particularly difficult on him as well, being less than an hour from his hometown but not able to actually see any one from it. While a bit frustrating at time, he understands that’s just one of the sacrifices that players around the NHL need to make this season, in order to safely accommodate a regular season during a global pandemic.

Two days later, Anderson had similar sentiments, but also noted that it was a comforting feeling knowing that he did have his family in the stands, finding a silver lining in the situation.

“It’s different, not being able to see [my family], be able to give them a hug, or talk to them,” Anderson said. “Just being able to have them at the game though, it’s special for us. Growing up in this city and playing in this rink before in college and high school, and having them there, having their support, it feels great, it makes it feel a little bit more comforting.” 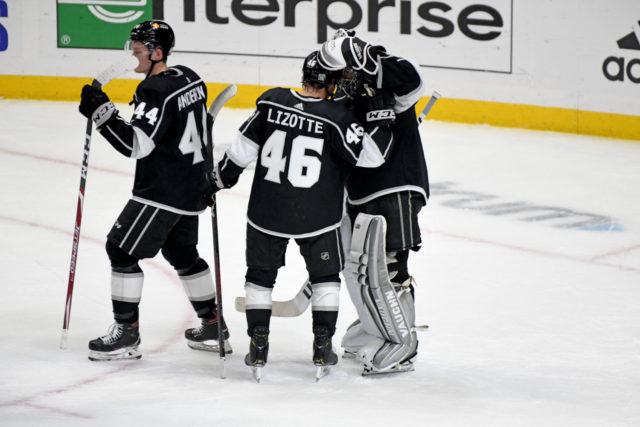 No matter what was different, however, it was still a special moment for Anderson, and for his family.

Although in advance of the first game of this two-game set, Todd McLellan says that he didn’t really plan to have any kind of special conversation with either Minnesota native, or have anything special planned, it was a nice touch of the veteran bench boss to start both players in Tuesday’s game.

The starting lineup nod, the hometown feels and the chance to, at least in a small way, share a moment with his family was a rewarding feeling for Anderson. Regardless of the circumstances, playing an NHL game in Minnesota was still a box on the bucket list checked for the 21-year-old defenseman.

Anderson grew up as one of so many young Minnesotans who one day wanted to play in the NHL, and he achieved that dream last season, when he made his NHL debut at STAPLES Center in February 2020.

Playing in the NHL at Xcel Energy Center was another cool moment. Like Lizotte, Anderson played in the Minnesota State High School Hockey Tournament, with Anderson representing Hill-Murray School in the 2015 tournament. Stationed behind the team benches are jerseys of every high-school team in Minnesota, including Anderson’s alma mater.

The 6-0 blueliner also played in the arena in collegiate hockey at Minnesota Duluth. The NCHC holds its annual conference tournament at Xcel Energy Center, which Anderson and the Bulldogs won in 2019, over Lizotte’s St. Cloud State Huskies nonetheless.

Anderson, alongside his brother Joey, also won the 2018 NCAA National Championship in St. Paul, one of two consecutive collegiate titles for the younger Anderson brother.

“My favorite moment [at Xcel Energy Center], would be my freshman year of college, when we won the national championship there,” Anderson said. “That was my number one, going into this week, was playing in that game.” 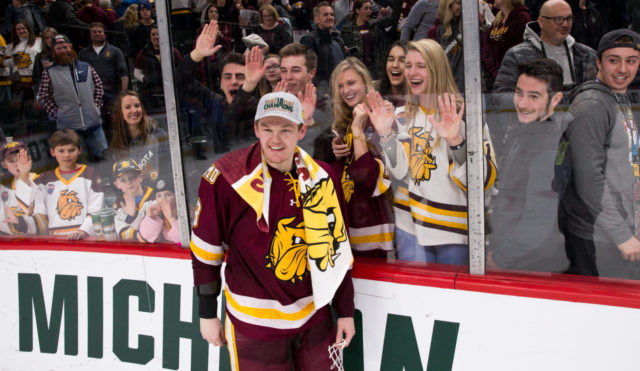 Yesterday’s game seemed to bring Anderson’s career, from a Minnesota standpoint, full circle. He’s played there at just about every level in his hockey career, and now he’s done so at the highest level.

It didn’t quite hit him until today, but he’s had the opportunity to play at the arena since he was a young kid, and last night was the ultimate next step.

“I didn’t even really think about that until now, but looking back, I even had a couple of youth games there as well,” he said. “I’ve been there throughout my life at different stages, it’s pretty cool, especially growing up going to the Wild games. I kind of forgot about it, but when that horn goes off when they come on the ice, I’ve heard it for the last 20 years. It’s pretty cool to be a part of it and participate in a game at the rink.”

With the first one under his belt, and a Kings victory to boot, Anderson, like the rest of his teammates is now focused on tonight’s rematch, as the Kings look to extend their strong momentum with another victory in the “State of Hockey.”

With his immediate family in the stands once again tonight, Anderson is still looking forward to another game in his home state, as he continues to build his own seat at a table of NHL players from the state of Minnesota.