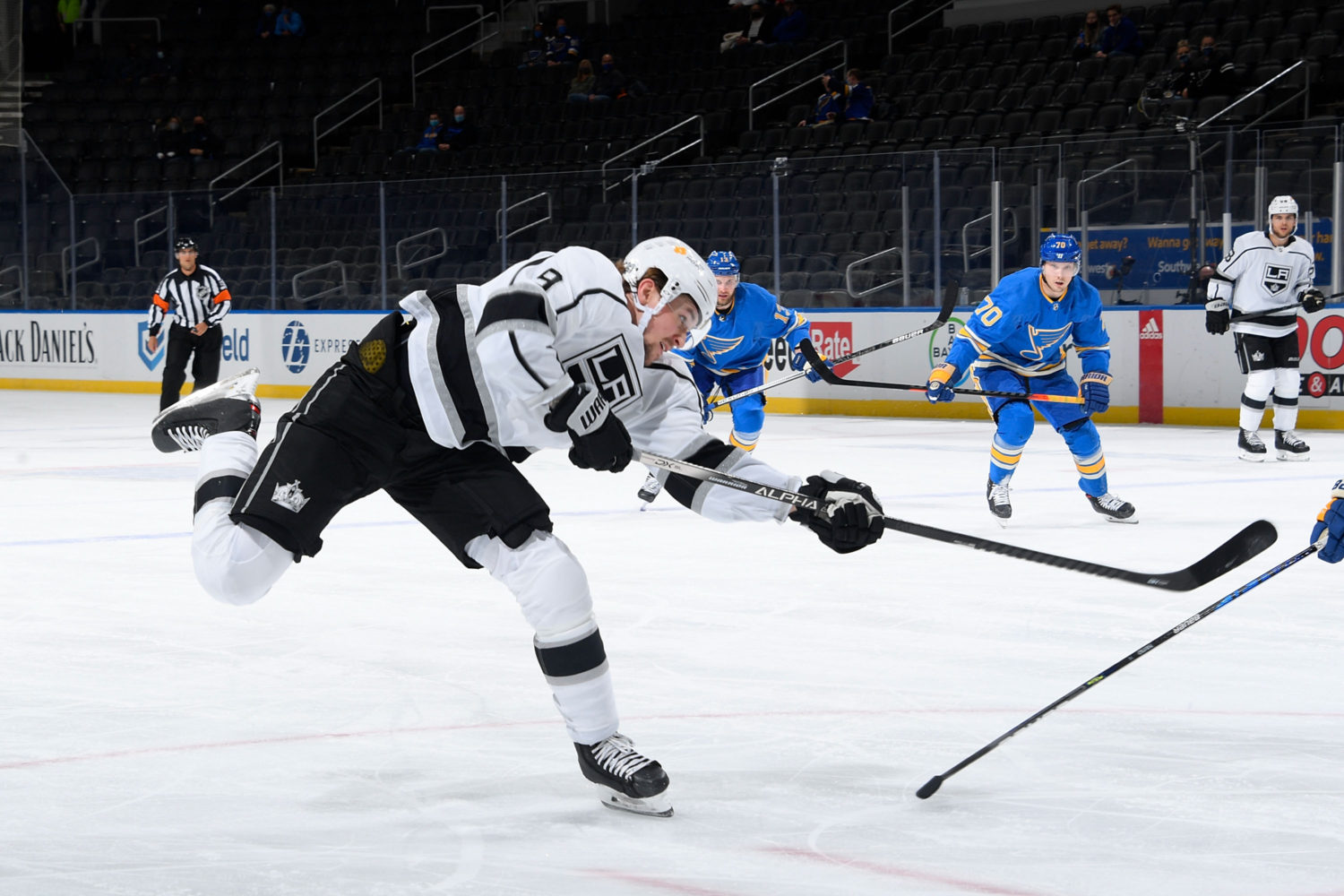 TONIGHT’S MATCHUP: The LA Kings and St. Louis Blues will square off again this evening in a rematch at Enterprise Center. The Blues took Game 1 by a 4-2 final yesterday evening, in the first game between the teams this season.

HEAD-TO-HEAD: With last night’s victory, the Blues have now won four in a row against the Kings, including a sweep of the season series last season, and eight of the last 11 meetings in total. With an assist last night, forward Alex Iafallo has now collected points in each of his last three games against the Blues, as has Anze Kopitar and Drew Doughty, who also picked up assists in the second period. For St. Louis, defenseman Vince Dunn, who scored twice in two games against the Kings last season, scored the go-ahead goal in the middle stanza. David Perron (1-1-2), Ryan O’Reilly (0-2-2) and Robert Thomas (0-2-2) each had multiple points in the victory.

KINGS VITALS: The Kings did not hold a morning skate today in St. Louis, considering the back-to-back set, but with Cal Petersen going last night, it is reasonable to expect Jonathan Quick in net this evening. Though his record against the Blues is his worst by percentage, against any one opponent (9-15-3), his goals-against average and save percentage both fall in line with his career numbers. Quick is also 8-2 against St. Louis in the postseason, bringing him to exactly .500 when combining the two.

When I asked McLellan yesterday about certain factors he used when deciding which goalie played which game, he said that all of the preparation regarding the lineup is based around Game 1, rather than an overarching view of the set.

“We only look at Game 1, to tell you the truth,” McLellan said yesterday. “With goaltenders, it might be a little bit different, but with the lineup as a whole, we’re looking at Game 1, planning for that, and we’ll make the adjustments after Game 1. All of the game planning, the pre-scout, leads to the first night and then adjustments come on the second.”

Without a media availability this morning, we won’t know until closer to puck drop if the Kings will make any those adjustments to their lineup. Here is how the team lined up last night, with updates potentially to come if we see any in advance of tonight’s game –

BLUES VITALS: The Blues have yet to play a back-to-back set this season, meaning games on consecutive nights, not against the same team. If we look back to last season, Jordan Binnington started both games of a back-to-back set just once, the only time he’s done it in his NHL career. The other option tonight would be Ville Husso, who has played just 20 minutes of NHL hockey in his career, which came in relief of Binnington earlier this season against Colorado. Husso has four seasons of professional hockey under his belt in North America, coming mostly at the AHL level with San Antonio and Chicago, as well as three years in the top division in Finland with HIFK Helsinki.

Similar to what we showed for the Kings, here is how the Blues lined up in last night’s game –

Top Line Is Tops
Adrian Kempe was all over the ice last night. The 24-year-old forward hit the post early in the game, with the Kings’ best chance of the first period, and later found the back of the net early in the second period to tie the game at one. Kempe broke the 20-minute mark for just the second time in his professional career (20:08), falling just 21 seconds short of his NHL career-high (20:29) from March 23, 2019.

For Kempe, he has now scored in three consecutive games for the fourth time in his NHL career. Kempe is averaging three shots-on-goal per game this season, second best on the Kings, and he has the highest Corsi-For Percentage of any Kings skater who has appeared in all five games.

In the view of his Head Coach, from yesterday morning, he’s seen Kempe mature into a player who is ready to take on that role of playing alongside Kopitar. In a short sample size, the results have been noticeable.

“Last year, and I’ve said that about Adrian, I think he’s matured a lot over the last little bit,” McLellan said. “Last year, I’m not sure that he was ready to play there full time, I think he deferred to the older veterans, whether it was Brown, Kopitar, Carter, whoever it might be. When he got to play on the wing, be the alpha on a line, he excelled. This year, we were a little hesitant to move him there, just because of that fact, but if one game in is any indication, I think he’s ready to accept that responsibility more than maybe he had in the past.”

Kopitar has proven to be a staple of consistency this season, with assists in four of the five Kings games, including three multi-point efforts. After last night’s game, McLellan pointed to the security blanket that Kopitar provides the team, citing his work ethic and habits on day-in, day-out basis.

“He understands how we want to play, he attempts to play the right way all the time,” McLellan said of Kopitar. “I think through his work ethic, not so much through his words, but just through how he does things, he provides great leadership to our group. There’s a lot of nights when we’re counting on him, he’s playing a lot of minutes right now, we’re going to have a lot of hockey, so that’s concerning, we’ve got to make sure he gets his rest. We need a few others to pick it up, especially through the middle a little bit, so he can get a breather.”

Iafallo was the breakout performer for this team last season, as he cemented himself as a legitimate top-six winger in the NHL, ranking in the Top-100 in leaguewide scoring.

While he has perhaps flown a bit under the radar so far this season, there are few qualms with his play through five games.

Back-To-Backs
Last season, the Kings went 5-7-0 in the second half of back-to-back sets.

The difference tonight is that both teams are in the same boat. Typically, the road team is facing a rested home team, meaning a team that did not play the night before. In tonight’s contest, and in almost all of the back-to-backs the Kings will play this season, both teams are on a level playing field.

We’ll see how that alters the team’s record in such situations as we move through the season.

Reign Back At It
The Ontario Reign continue their exhibition slate this afternoon, with a 1 PM Pacific puck drop against the Tucson Roadrunners. The two teams will also play again tomorrow at the same time at Toyota Sports Performance Center in El Segundo.

Several Kings prospects are expected to suit up this weekend for Ontario, though forward Quinton Byfield is day-to-day with a lower-body injury and not expected to play today due to injury.

On Friday, in their preseason opener, Byfield and Reign forward Blaine Byron had the goals in regulation, while defenseman Sean Durzi had assists on both markers. Forwards Rasmus Kupari, Tyler Madden and Akil Thomas scored in the shootout, as Ontario won 3-2.

Updates to follow, if we get them, regarding tonight’s lineups. Game Thread coming up later!