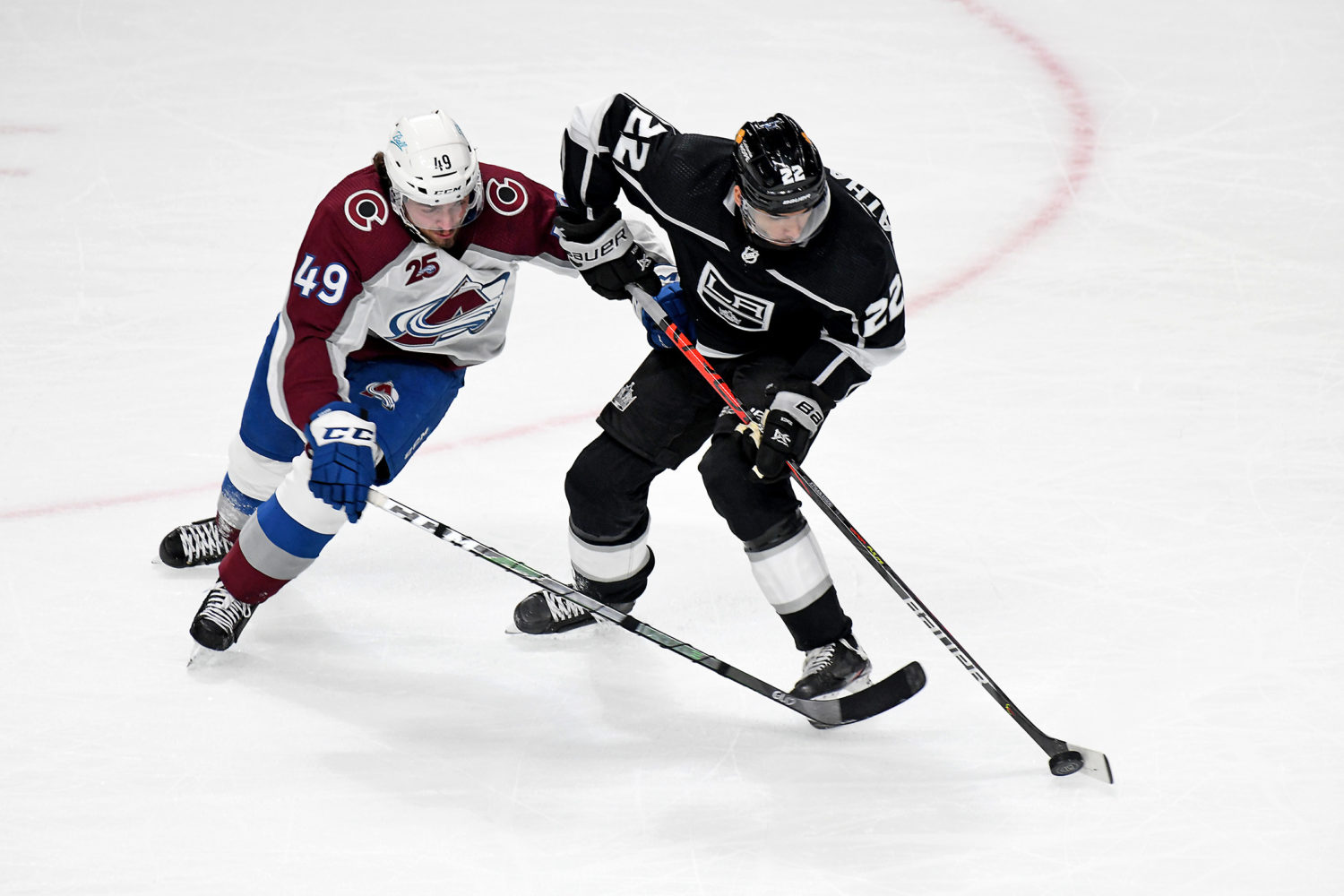 TONIGHT’S MATCHUP: The LA Kings are back in action this evening for the final game of their season-opening, four-game homestand. The Kings are set to take on the Colorado Avalanche in a rematch from Tuesday evening, with puck drop slated for 7 PM from STAPLES Center.

HEAD-TO-HEAD: With Tuesday’s defeat, the Kings lost in regulation for just the third time in their last 12 games against Colorado, and the third time in the last 14 matchups between the two teams in Los Angeles. The Kings got two points on Tuesday from Anze Kopitar, who moved over a point-per-game in his NHL career against Colorado, as the Avalanche became the sixth team that Kopitar is over a PPG pace against. Forward Nathan MacKinnon had two points in his team’s win on Tuesday, and now has 12 points (3-9-12) from 20 career games against the Kings, his second-lowest point-per-game total (0.6) against any NHL opponent.

KINGS VITALS: Jonathan Quick was the first goaltender off this morning and looks to be set to return to the net after Cal Petersen made his season debut on Tuesday. Quick was in top-form against Colorado a season ago, as he turned aside 83 of the 86 shots he faced, good for a .965 save percentage and a 2-0-1 record from three games played. Quick is 19-6-2 lifetime against Colorado, to accompany a .918 save percentage and a 2.16 goals against average, his lowest against any current West Division foe.

A projected lineup for tonight’s game –

As noted yesterday, some alterations are expected for tonight’s game, both in terms of personnel and line combinations. Michael Amadio looks likely to check back into the lineup, while defenseman Kale Clague will likely enter for Kurtis MacDermid.

In terms of forward lines, the optional skate doesn’t give us a full sense of what tonight’s lines might look like, but the above is a good representation. When speaking this morning about making lineup changes, McLellan reemphasized that the changes made would not be drastic and that it’s important to rotate players such as Clague in, to make sure they continue to stay sharp.

“If we do [make lineup changes], it won’t be dramatic,” McLellan said. “We’re not going to put everything into a blender. It’s trying to find a few more players, get them up and running a little bit better, a little bit quicker, maybe needing more from other individuals. Can one individual complement a pair right now, based on how they’re playing? Based on inserting guys in and out of the lineup, it’s twofold – based on performance, but also based on the ability to keep everybody, I use the word alive and close to the team. They need minutes. Nobody’s played any exhibition games. Kale Clague, for example, has played one [game] in the last ten months. If he goes another two weeks, we’ve basically lost him again. It’s important that everybody gets a feel for the game with the unpredictability of this type of season.”

AVALANCHE VITALS: Goaltender Hunter Miska is set to make his first career NHL start this evening, his second-ever NHL appearance. Miska made his NHL debut on November 13, 2018 with the Arizona Coyotes, as he played 18:16 in relief.

Here’s how we could see the Avalanche line up tonight –

It’s looking like a day for debuts for Colorado. In addition to Miska, defenseman Bowen Byram is slotted to make his NHL debut tonight in Los Angeles, while defenseman Greg Pateryn looks like he will make his Avalanche debut.

Miska’s story is pretty great. Miska was assigned to the ECHL as recently as last season, as he began the year on an AHL contract with the Avalanche’s AHL affiliate, the Colorado Eagles. Miska went on to earn an NHL deal in February and will now make his first career start, and second career appearance in the NHL tonight.

Byram’s path has been different. The 19-year-old defenseman was selected fourth overall by Colorado in last season’s NHL Draft, and joined the team earlier this month after representing Canada at the World Junior Championships, alongside Kings prospects Quinton Byfield and Jordan Spence.

Juice Is Worth The Squeeze
Adrian Kempe earned himself a lineup bump for tonight’s game. He is expected to slot in on the left of Kopitar and Alex Iafallo on the team’s top forward unit and said this morning that this would be the first time he’s played with Anze Kopitar on a line.

McLellan said after Tuesday’s game that he wanted more speed on that line, in-game, and Kempe fills that role. While he is excited for the opportunity, Kempe is planning to continue to play his own game, and see how it meshes with his new linemates.

“I think I just play my game,” Kempe said. “A lot of speed, get in on the forecheck and try to win pucks, I think that’s the main part. Maybe [Kopitar and Iafallo] don’t play exactly the same way, but I’m going to have to adjust on that during the game. I think I just go out there and play my game. It’s nice to get a chance with Kopi, I haven’t played with him before, so I’m excited.”

While Kopitar and Kempe have never been linemates at even-strength, they do play together on the power play, along with Iafallo. That combination connected for a goal, Kempe’s first of the season, on Tuesday, with Kempe burying a one-timer and Kopitar collecting an assist. Kempe feels that the existing time on the man advantage only helps them to, hopefully, find quick chemistry at even strength.

Kale Of Duty
After he was out of the lineup for the last two games, defenseman Kale Clague confirmed this morning that he will return tonight against Colorado.

While he has not experienced quite the shuffling in terms of role on the team that say Lias Andersson has, Clague was in the lineup in the season-opener last week, but was a healthy scratch in Games 2 and 3 as the pairing of MacDermid – Walker became eligible to return to the lineup.

While disappointing, because Clague played well in his first game, he knew it could be a part of the process this season. The 22-year-old defenseman worked hard in practice and is ready to seize his opportunity tonight. He said that messaging from the coaching staff was simple, and to be ready for whenever his next chance might be.

“It was brief from [Trent Yawney], he said it has nothing to do with my game, told me to stay ready and that the next opportunity is going to come sooner than I think,” Clague said. “I just worked hard in practice and it was good to watch the games, take some things away from those. I’m excited to be back in the lineup tonight.”

McLellan spoke yesterday about how Clague has earned another opportunity, which now will come tonight, with Sean Walker on his right. The two play somewhat of a similar game – both smooth skaters, move their feet well, move the puck well. For Walker, it’s a bit of an adjustment for him, moving from the strong and steady MacDermid to the puck-moving Clague. Though they are two different players, Walker doesn’t see much of a difference with how he approaches the game.

“I don’t think there’s too much adjustment,” Walker said. “People kind of perceive Kurtis as a more stay-at-home defenseman, and Claguer as more offensive, but Derm has the ability to jump up in the rush and Claguer has the ability to stay at home. I think it’s just working with whoever you’re playing with that night, being on the same page and having lots of communication out there.”

Today, McLellan noted that the style that Walker and Clague offer fits into the modern-day defensemen mold we’re starting to see more and more of around the league.

For his part, Clague recalled back to playing his first NHL game last season in Buffalo, with Walker as his partner, and noted that they also played together a bit in the AHL with Ontario in the 2018-19 season. He thinks with both players having speed on the back end, it’ll be important to use that against a fast team in Colorado.

“They’re a fast team and I think it’s going to be important for us to get back to pucks in a hurry,” he said. “We can both skate, so I think that’s to our advantage to get to pucks, break pucks out fast and in the offensive zone, on the blueline, create lots of motion, cause stress on their wingers.”

For the last time in January, Game Thread from STAPLES Center is up next!