As the saying goes, a two-goal lead is the worst lead in hockey. Obviously, it’s incredibly untrue – you’d rather have a one-goal lead than a two-goal lead? Cmon now. For the LA Kings though, in their season-opening set against the Minnesota Wild, the cliche held true.

The Kings led both of their games 3-1 through 40 minutes of play but found themselves on the wrong side of 4-3 overtime defeats in both contests. There’s also the obvious storyline of the Kings taking too many penalties, but that’s for another day.

On Thursday, Los Angeles conceded twice midway through the third period, and left its Head Coach wondering why they continually carried pucks backwards in the final 20 minutes.

“I was disappointed, in the third period in particular, that we kept bringing pucks back when we didn’t need to,” Todd McLellan said, after Thursday’s game. “We could have gone North, and we decided to bring it back South, play East – West in our own zone and then pull it out of our net. That’s not going to work.”

Last night was a different story, though that much more frustrating in the end. The Kings did not feel like they sat back or retreated, but a broken play inside the dying seconds of regulation wound up in the back of their net, forcing OT yet again.

“I don’t think we sat back too much,” Adrian Kempe said, after last night’s game. “We wanted to learn from last game, we brought the puck back a little bit too often in the third and it made us let in some goals at the end. I think today, we didn’t bring pucks back, we knew they were going to come hard and take some risks and we still had some chances to score. Unfortunately, they came back in the third, but I think we did a better job than last game in the third period.”

Looking at last night specifically, here’s how close the Kings were to icing the game with an empty-net goal.

Inches – What are the odds of this shot, taken by Matt Roy from his own blueline, not resulting in either a goal or an icing? Miniscule. It hit the post in mid-air, kicked back in front of the goal line and the Wild were able to equalize.

Through the first series for all divisional foes, four of the eight teams in the West Division came away with two points from their opening two games, though the Kings were the only team to do so without a victory. Two points are two points, but three points or four points should have been earned. Had the two points been gained through a regulation win and a regulation loss, split between the two teams, the perception around the opening two games would have likely been substantially better. The difference in that scenario, however, would be that division rival Minnesota would also have two points, as opposed to four, which puts such an added emphasis this season on winning games in regulation.

“The format now, I think forces teams to try to get two points in regulation,” Dustin Brown said, between the two games. “As the year goes on, points accumulate, and you’re only playing the same seven teams, I think there’s going to be a cluster of teams. The way it’s designed, overtime losses, they’re huge now. Sometimes, in years past, if you can sneak a point in, not that you’re content with losing in overtime, but you look at it as a positive. It might be viewed a little differently as this season progresses. Overtime losses might honestly feel just as bad as a regulation loss.”

Hopefully, the entire perception from these first two games is not doom and gloom. Despite the end results, you saw a Kings team that did some good things they did not do over the bulk of the last two seasons. Last season, the Kings shot from everywhere and anywhere, by design, but that did not translate into goals – they ranked fourth in shots per game, but third to last in 5-on-5 goals.

To me, that makes all the gritty goals from in and around the crease very encouraging. The Kings averaged 2.54 goals per game last season and netted three in each of their first two games. In McLellan’s mind, three goals should be enough to win the Kings hockey games this season……is it still a 3-2 league? The league average last season was 3.02 goals per game, meaning if you can score three every night, you’ll be in most games.

Jeff Carter had to be one of the brightest spots from the opening two games. It’s been more than two years since he’s had back-to-back multi-point games and he’s never done it in the first two games of a season. Skating-wise, he looked great – nimble, moved really well, dangerous offensively. Andreas Athanasiou scored in both games, coming off of odd-man rushes created by Carter. Both goals were technically rebounds, but they were calculated rebounds, and it was Carter being able to create with speed, alongside one of the fastest players in the league, that created the goals. Carter’s playmaking, and Athanasiou’s nose for the net are both good signs when it comes to getting production from the “middle-six” behind the Kopitar line.

Moving forward, the Kings will need to take that next step from a team that is in close games, to a team that wins close games. The veteran core of this team knows how to win, but for the bulk of the current roster, they still need to complete this learning process, which means learning how to properly close out games like these two against Minnesota.

The Kings are off today and will return to the ice tomorrow morning at Toyota Sports Performance Center, in advance of Tuesday’s game against Colorado. 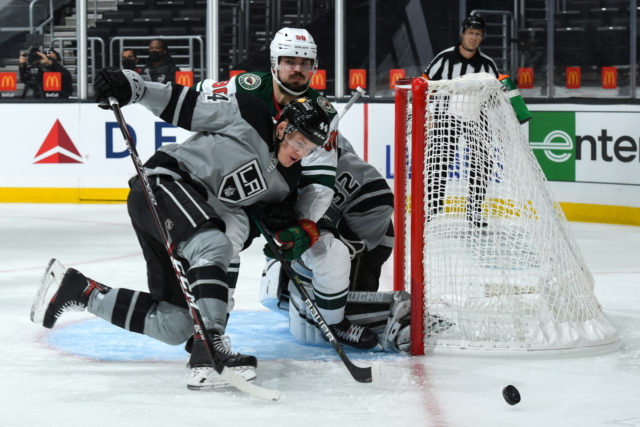