The Kings hit the ice this morning for an in-betweener, on the non-game day between a pair of home games against the Minnesota Wild.

It wasn’t a particularly long skate, or a particularly eventful skate – The team got the legs going throughout practice, worked on breakouts and transition game, as well as some light special teams work, specifically on the power play. It may have been deemed that the penalty kill got enough work in last night, as it killed off all seven opportunities again in the overtime loss to Minnesota. More on that below.

Today’s Kings lineup was identical to what we saw yesterday, and in the team’s most recent practice on Wednesday, embedded below. Also included in today’s group was a line of Carl Grundstrom – Lias Andersson – Jaret Anderson-Dolan and a defensive pairing of Tobias Bjornfot – Austin Strand.

With regards to the game itself, when McLellan went back and watched the tape, he found that he came away with generally similar impressions to what he had immediately following it last night.

“It was the same,” McLellan said. “I thought [Minnesota] ended up with more chances than we did, large in part to the number of minutes they played on the power play, they created some good ones there, but goaltender was good, penalty kill did a pretty good job,” he said. “There were still Grade A chances, and at the end of the night they did out-chance us, which usually leads to being on the negative side of the scoreboard and that’s how it turned out.” 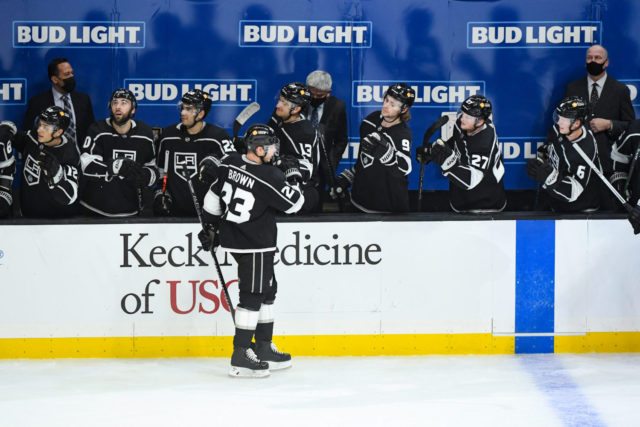 Mr. 300
A big milestone was reached by Dustin Brown last night, as the veteran forward scored the 300th goal of his NHL career, with all 300 coming as a member of the Kings.

The goal for Brown came in a little bit of a strange way, as he was awarded number 300 retroactively. The power-play tally for the Kings was originally given to Adrian Kempe, as Brown passed the puck out from behind the net and it deflected in off of a Minnesota stick, rather than Kempe’s. Although he admitted that he didn’t find out until after the game, when he was congratulated by teammate Lias Andersson, the accomplishment was still meaningful for him.

“It’s something I’m proud of,” Brown said earlier today. “I actually didn’t even know until after the game, I assumed that Juice had gotten a stick on it, just the way the play happened. I think Lias congratulated me and I didn’t know what he was congratulating me for, so that’s how I found out. If you play long enough, you can eventually get to any milestone.”

Brown pointed out additional context to his goal as well this morning as well, which put him into distinguished company amongst American-born players. While he downplayed the accomplishment a bit, with the “if you play long enough”, he’s entered into a good group no matter which angle you look at it from.

“You look at the players before that have gotten to those milestones,” Brown said. “One of my best friends texted me and told me I was the 22nd American to get there, that was one I didn’t know about. Again, like I said, if you play long enough, you get to certain milestones.”

Brown’s head coach was happy for him and elaborated on some of the different values that he brings to the Kings.

The best ability is availability, and Brown has been available for the Kings for his entire career. Without so many of the things that he provides for the organization, he wouldn’t have succeeded with the team, to the tune of nearly 1,200 games, for as long as he has.

“You don’t stay in one spot for as long as Dustin has if you don’t bring a lot of intangibles to the table,” McLellan said. “Certainly 300 is a goal that not a lot of people will reach, it speaks to his longevity and his skillset and we’re happy that he reached that goal. Over and above that, he’s provided physicality and leadership for this team for a long, long time, he’s played in every situation. We’re fortunate to have him, we hope that he can continue on and continue to provide us what we need as a team for the next few years.”

Penalty Parade
The Kings were a perfect 7-of-7 on the penalty kill last night.

Is that statistic a glass half full situation, where we can comment on how well the penalty kill did overall? Jonathan Quick was outstanding, as the team’s best penalty killer, and the unit as a whole was good.

“I thought we were playing pretty structurally sound,” defenseman Matt Roy, who led all Kings players with 5:05 of shorthanded time on ice last night, said. “We weren’t really out of position too much and I think we jumped on loose pucks, made some good plays to ice the puck down the ice. I think that made it easier on us, for sure.”

Or, is it a glass half-empty situation? Seven penalties is too many to be taking, and as McLellan spoke to last night, it took certain players out of the flow of the game who don’t kill penalties, leading to extended stays on the bench, especially in the second period.

“Officials are getting back to identifying to players what the standards are, and how they’re going to be called, what’s acceptable and what’s unacceptable,” McLellan said. “When you push the limits, you cross the line, you’re going to get called.

There’s probably a little bit of both in there.

McLellan alluded to not having those game situations in so long playing a role in the players taking some of those penalties. He also pointed to this issue not being unique to the Los Angeles – Minnesota game, noting how many penalties were called across the league over the first two nights of play.

“There were power plays all over the league last night – as we were waiting for our game to start we were watching others – you could see there were 5-on-3 situations, a lot of penalties being called all over,” McLellan said. “We talked about it before, but talk is cheap sometimes, you have to go out there and execute and we failed to do that in certain situations.”

The Kings won’t bat 1.000 for the season on the penalty kill, but last night’s strong start was a good sign for a team once known for being among the league’s elite when down a man. Giving themselves less penalties to kill, however, will be among the priorities heading into tomorrow.

An Update!
Since January 9, Sean Walker, Kurtis MacDermid and Cal Petersen have all been out of action, but there could be some light at the end of the tunnel. We could see word on whether or not the trio of players have cleared protocol as early as this afternoon, or possibly tomorrow morning, which would make them eligible for the rematch against Minnesota tomorrow evening.

“The three players that are out, they’re still status quo,” McLellan said. “We’re hoping that they will be able to clear either later today or tomorrow morning.”

The Kings seemingly started that process today, as defenseman Mark Alt and goaltender Troy Grosenick were placed on waivers. Important to keep in mind that both players could be assigned to either the taxi squad or to the Reign, if they clear waivers but also that just because a player clears waivers, doesn’t mean they need to be assigned anywhere.

Stay tuned for more information as it comes about. 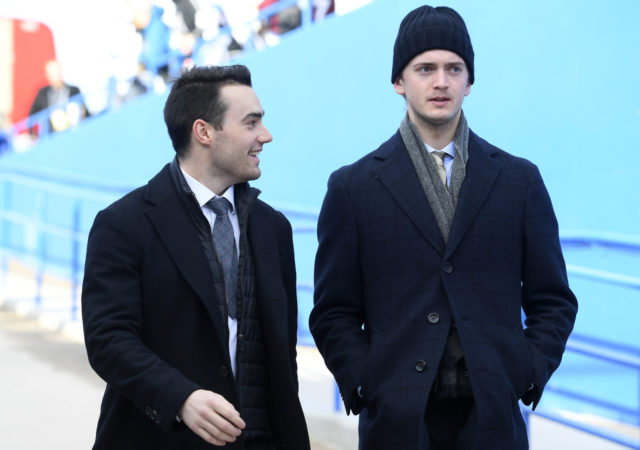