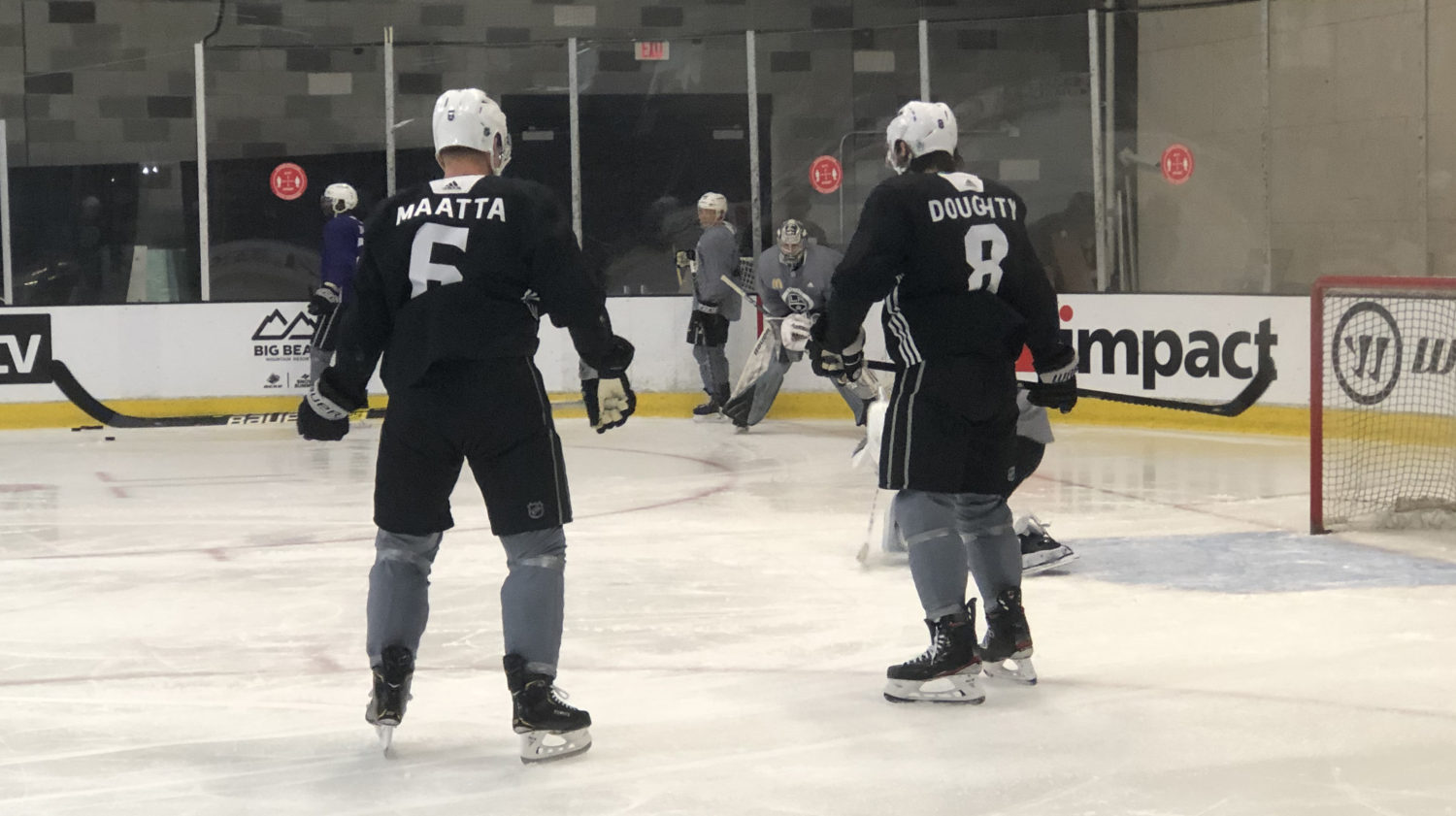 For the first time in what feels like awhile, Drew Doughty opened training camp paired with a veteran on his left.

“This is probably the first time since Rob Scuderi, however many years ago that was, that I’ve really played with a veteran,” Doughty said. “I’ve always had [younger] d-men, so to have a veteran will be different, but I think it’ll be beneficial for me for sure.”

Playing with guys like Derek Forbort and Brayden McNabb helped to develop those players, budding NHL’ers, into established players. But adding a veteran with seven years of NHL experience has Doughty excited for that lies ahead.

That veteran is Olli Maatta, who joined the organization this offseason, via a trade with Chicago. For the 26-year-old blueliner, it marked the second time he was traded in as many seasons. After he spent the first six seasons of his professional career in Pittsburgh, Maatta was traded to Chicago last offseason. One year later, the Finland native was on the move once again, this time to the West Coast, and he’s looking forward to a new opportunity with an up-and-coming Kings team.

“I was excited,” Maatta said of his initial reaction to the trade. “I knew the Kings had been through a rebuild the last couple of years, they’ve obviously been tough years, nobody’s happy, it’s not easy to do that. I think they’re on the other side of it. Looking at the guys we have, we have a lot of good players here, whether it’s the older guys, who are still great players, or the young guys we have who are really good.”

While Maatta and Doughty have never played together officially until training camp opened on Friday, the relationship preceded their time as teammates with the Kings. 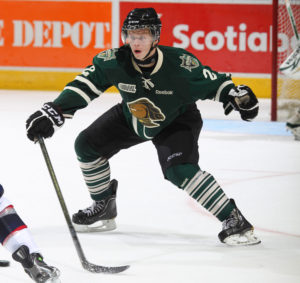 Maatta played his junior hockey with the London Knights of the OHL, while Doughty is a London, ONT native. The two frequently skated together in the summer and built a relationship that has made the transition to being teammates, and now defensive partners, that much easier.

Maatta said that this most recent summer was the first time he didn’t go to London to skate, ironically enough the first time he’d be playing with Doughty as a teammate. COVID-19 took away even the best-laid plans, as Maatta and the Blackhawks were playing in the NHL’s return to play in Edmonton.

That doesn’t take away, however, what the pair built in past years. Maatta has admired the way that Doughty plays the game and has enjoyed the opportunity to see him up close in those summer skates over the years.

“He’s a guy that I always loved to watch play, it was awesome,” he said. “When we skated together in the summer, and you could see closely what he does on the ice, I think it’s awesome to be playing with him now.”

Maatta pointed to Doughty’s communication skills on the ice as being something that’s helped to make the pairing easy, saying that the Kings’ alternate captain “talks all the time” as they’re playing. Maatta also noted that he thinks that he and Doughty think the game the same way, something the latter agreed with.

“It’s exciting because we play the same [way],” Doughty said. “We’re thinkers, we’re not necessarily the fastest skaters, we’re thinkers. We’re good positionally, we’re good at moving the puck, we’re good at making plays to give each other all time. I think I’m going to get a lot more pucks on the blueline from him, because he’s always looking over, so that will be amazing.”

The instant chemistry on the top defensive pairing is already making an impact on the Kings coaching staff as well. Todd McLellan isn’t one to embellish a narrative. He sees a real connection between the two players, which is a good sign for the Kings just three days into training camp.

“I’m not going to create something artificially that’s not there, they’re already connecting,” McLellan said. “You see it in practices, you see it in the scrimmages, they seem to have a relationship that’s building. Olli’s going to have to get the system down, and that will make it even easier for Drew.”

Picking up the system, however, in Doughty’s opinion, will be no problem for Maatta.

“With his attention to detail, he’s going to have all the systems down pat by the end of this week no problem, I think he probably already does have them,” he said. 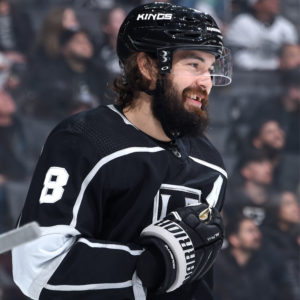 Few players in the NHL exit the defensive zone with team control of the puck better than Drew Doughty. Doughty ranks among the NHL’s best in exiting his own zone with possession of the puck, via an outlet pass, stretch pass or skating it out himself.

The former Norris Trophy winner excelled in the same area in the 2018-19 season, ranking as one of the NHL’s best again. It’s just one statistic of so many that can measure effectiveness, but both Doughty and Maatta said that breaking the puck out of the defensive zone is an area where they will excel in as a pair.

Doughty, multiple times, referenced how he feels their passing abilities will mesh well, and considers moving the puck out of the d-zone with possession as “one of their specialties”.

Maatta agrees, indicating how important transitioning from defense to offense is, especially in the modern-day NHL.

“I think we have to get out of our own zone quickly, and that’s what I really take pride in, it’s a huge part of the game nowadays,” Maatta said. “You’ve got to get the puck to your forwards, that way you don’t have to spend so much time in your own zone defending and you get tired there and lose the momentum of the game.”

The less you defend, the more you get to play on offense……simple enough?

Both players know they’re likely to draw difficult defensive assignments throughout the course of the season, something they’re prepared for. McLellan touched on how important it’s been for the team to have Doughty logging many of those harder minutes, and in such a large quantity. He said that the appreciation level for what number eight brings is “quite high” in the coaches office and in the Kings locker room.

Doughty has frequently matched up against top competition over the last two seasons (2018-19, 2019-20), and that will be expected to continue.

His new partner, Maatta, believes that his defensive play is one of his biggest strengths, not only in the defensive end, but also in slowing down opponents as they attempt to transition.

“[My] other [strength] is defending, especially in the offensive zone,” Maatta said. “Having good gaps, and shutting down plays nice and early. That way it makes it easier on everybody.”

While he has never ranked as a team leader in time-on-ice, Maatta will be expected to carry a larger role here with the Kings. Doughty has averaged no less than 25 minutes per game over the last eight seasons, and his even-strength defensive partner will play larger minutes as well.

Time to continue to grow and develop as a pair will be minimal. Without exhibition games, and a shortened training camp duration, Doughty and Maatta will need to gel in practice settings only. Despite the new set of circumstances, Maatta feels that he and the Kings will be ready.

“I think it’s a great opportunity for me, and for the team,” he said. “Looking at the guys we have, we have a lot of established older guys who know how to win, and the younger guys are looking really hungry. I think they’re pushing everyone to get better, everyone’s fighting for spots right now, and I think when the season starts, we’re going to be ready.” 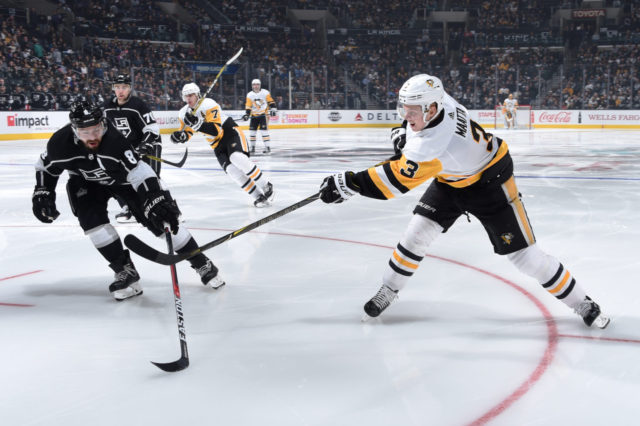