Catching up with Alex Faust 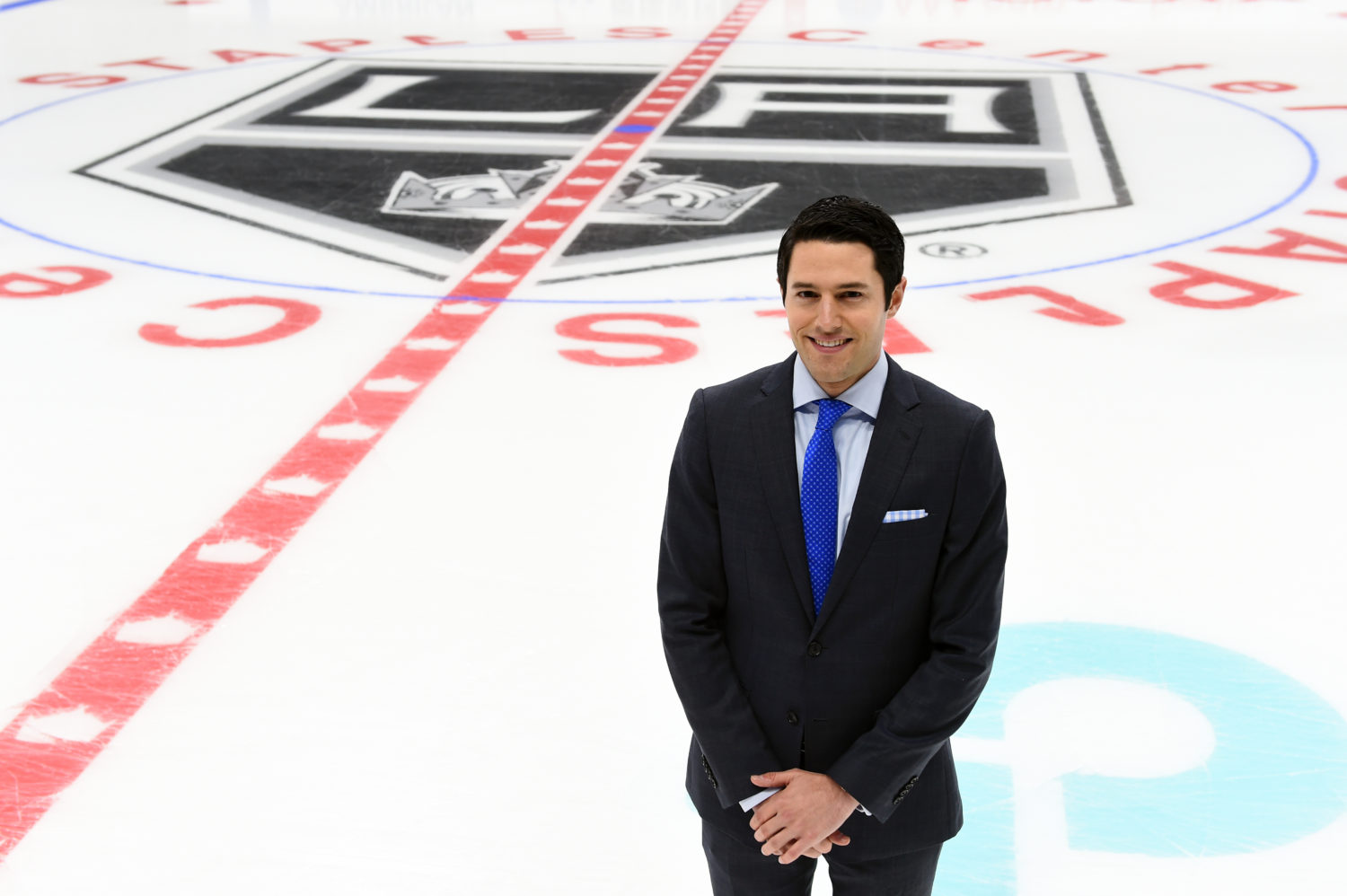 Near the beginning of quarantine, the LA Kings play-by-play announcer penned a heartfelt letter to Kings fans acknowledging the state of limbo. In the weeks that followed, he hosted a media call with recently-signed LA Kings prospects, executed several Fox and Faust podcast shows alongside co-host and broadcast partner, Jim Fox, and lent his play-by-play voice to gaming – first with simulated versions of the remaining LA Kings games and then with the NHL’s online gaming tournament.

When the sports world returned – with proper social distancing regulations – Faust dove back into his play-by-play duties. There were the NHL playoff games, a trip to Paris to cover the French Open and the return of college football broadcasts this fall.

At first glance, it almost sounds like business as usual for Faust. But, as 2020 has proven, this year has been anything but normal. Those playoff hockey games were called in August and from a monitor instead of in-person; the French Open, for the first time since 1947, was not held in its typical May-June window; college football has seen delayed season starts, postponements and even cancellations.

So, what does he make of all this? Let’s start with the playoff hockey. 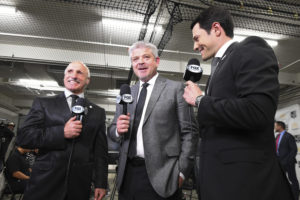 “Probably the best part of my summer was reuniting with Jim Fox to call some playoff games on radio for Westwood One,” Faust said. “It was as if the season never paused.”

But with the NHL utilizing a bubble format in Edmonton and Toronto, that mean Faust and Fox were reuniting in front of a monitor in Culver City, rather than a broadcast booth overlooking the ice in person. Still, just being able to call hockey again – and some exciting hockey at that – was much-welcomed.

“Even though we couldn’t be there, we did the games off a monitor in Culver City and had a blast. We were both impressed that the quality of play hadn’t dropped at all from past years. Even though it was a weird finish to the season, the season had a worthy champion in Tampa Bay.”

Once the hockey season officially concluded, Faust, as he does in a typical year, took the opportunity to be part of broadcasts in other sports, specifically tennis through his work with the Tennis Channel. That meant taking a plane to Paris to be involved in his first-ever French Open at the famous Stade Roland Garros.

“That was my first trip to the French Open,” Faust explained. “I started working at the Tennis Channel not too long before working for the Kings and the two have meshed pretty well. I work Tennis Channel in the summers and hockey in the winters. I’ve been so fortunate to be able to latch on with one of the fastest growing networks in the Tennis Channel. The events they do span the globe. Early this year, I was fortunate to be in Australia and cover part of that tournament during the bye week and All-Star Game. And even during the pandemic, the organizers of Roland-Garros were able to put on their event and boy, was it a thrill to be there.”

Now, with both hockey and tennis behind him, Faust’s latest broadcast duties feature a welcomed return to college football, a sport he covered in the early stages of his broadcast career. 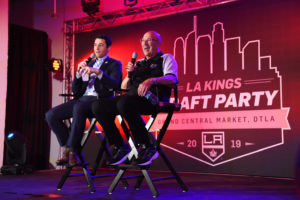 “College football was one of the first assignments I ever had with ESPN and it was a challenge then and it’s still a challenge now,” said Faust, who will be specifically working Mountain West and Pac-12 games out of Los Angeles.

For some, the shift from calling hockey to tennis to football can sound daunting. After all, those three sports are all vastly different from one another whether it’s the rules, the athletes or even the venue. For Faust, the shift from sport to sport is seen more as a welcomed change of pace.

“I enjoy preparing for a different sport,” he said. “Getting to work a little bit of college sports is always fun. We’re not traveling as much now but getting to go to all these campuses and sampling the atmosphere at all these different stadiums is so much fun. I’ve worked for FOX Sports since 2015, but I started doing football with them last year. I got to work Les Miles’ debut at Kansas, which was a thrill.”

How does he keep tabs of storylines, player streaks, league trends, to be able to speak so eloquently from sport to sport? Like many of us fans, he watches and monitors as much as he can.

“Even for the weeks I may not be covering, I’ll watch and keep tabs on scores and storylines. The same is true when you’re in the NHL. I’m not just keeping tabs on the Kings, I’m keeping tabs on all the teams so that when we encounter them, I have a sense for what’s going on and what the key storylines are.”

Still, even with his experience, Faust said there’s extra work needed to get into the college football groove.

“I have to dive headfirst back into it and do some heavy-duty research. But once the first few games are out of the way and I get a sense for who the main contributors are in the league and who the best teams are, it’s easier to get a feel for it. With hockey delayed at the moment, it gives me an opportunity to dive back in and do a full season of college football for the first time in about four years.” 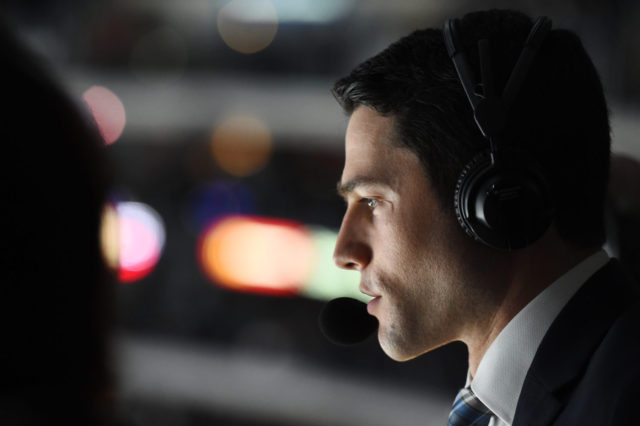 When it comes to his broadcast style, and the general ability to grow and learn over the years, Faust takes a wide-ranged approach. Regardless of sport, he studies what the top people in the industry have done well.

“What are they incorporating into their work or into their preparation? Even the ones who are at the top right now, like Jim Nantz or Joe Buck or Mike Tirico. There are elements that have contributed to their success that you try to work in, whether by detailed preparation or having the right feel for the moment or coming up with an inspiring call. Those guys are in those positions for a reason. In the NHL, I look at guys like John Forslund and Doc Emrick as two who are at the top of their craft and you can learn a lot just by listening to how they work.”

Not a bad idea to learn from some of the best out there. Unfortunately, given the recent announcement of Emrick’s retirement, that means one less broadcaster for Faust to watch.

Faust, himself, acknowledged Emrick’s retirement in a story written for LAKings.com.
Outside of broadcast duties, Faust has, as always, remained involved in various Kings community initiatives, whether it’s donating blood or simply donating his time.

“If it’s important to the organization, it’s important to the community. In LA, there are so many ways to get involved in your community and one of the best ways to get to know the city better is to volunteer. I’ve always enjoyed contributing to different projects. I’ve ridden in the Pan-Mass Challenge before when I lived in Boston. I’ve always enjoyed getting to know a place better by volunteering.”

Faust elected to be a Kings ambassador down at STAPLES Center, which served as a voting center for the general election on Nov. 3. “This is one of the biggest elections of our time and getting to go downtown where STAPLES Center is a polling place, it’s such a unique situation to begin with, so I felt it was a fun way to help out not only with the team but also to get to help out with running it. It’s a huge endeavor.”

Hockey, tennis, college football, volunteering. Maybe the question isn’t ‘what can’t this guy do?’ but, rather, ‘what’s on his wish list?’

“I’d love to do an Olympics one day. That’s obviously a little bit in flux and scheduling is what it is, but that would be fun to try out something like that. I’d love to call Olympic hockey given the chance. But honestly to be able to work one of those, no matter what you’re doing, it would be a thrill in itself.”

We’ll keep our fingers crossed for you.

This is the second in a multi-part series featuring various members of the LA Kings broadcast crew. Part 1 of the series, featuring Carrlyn Bathe, can be found here.