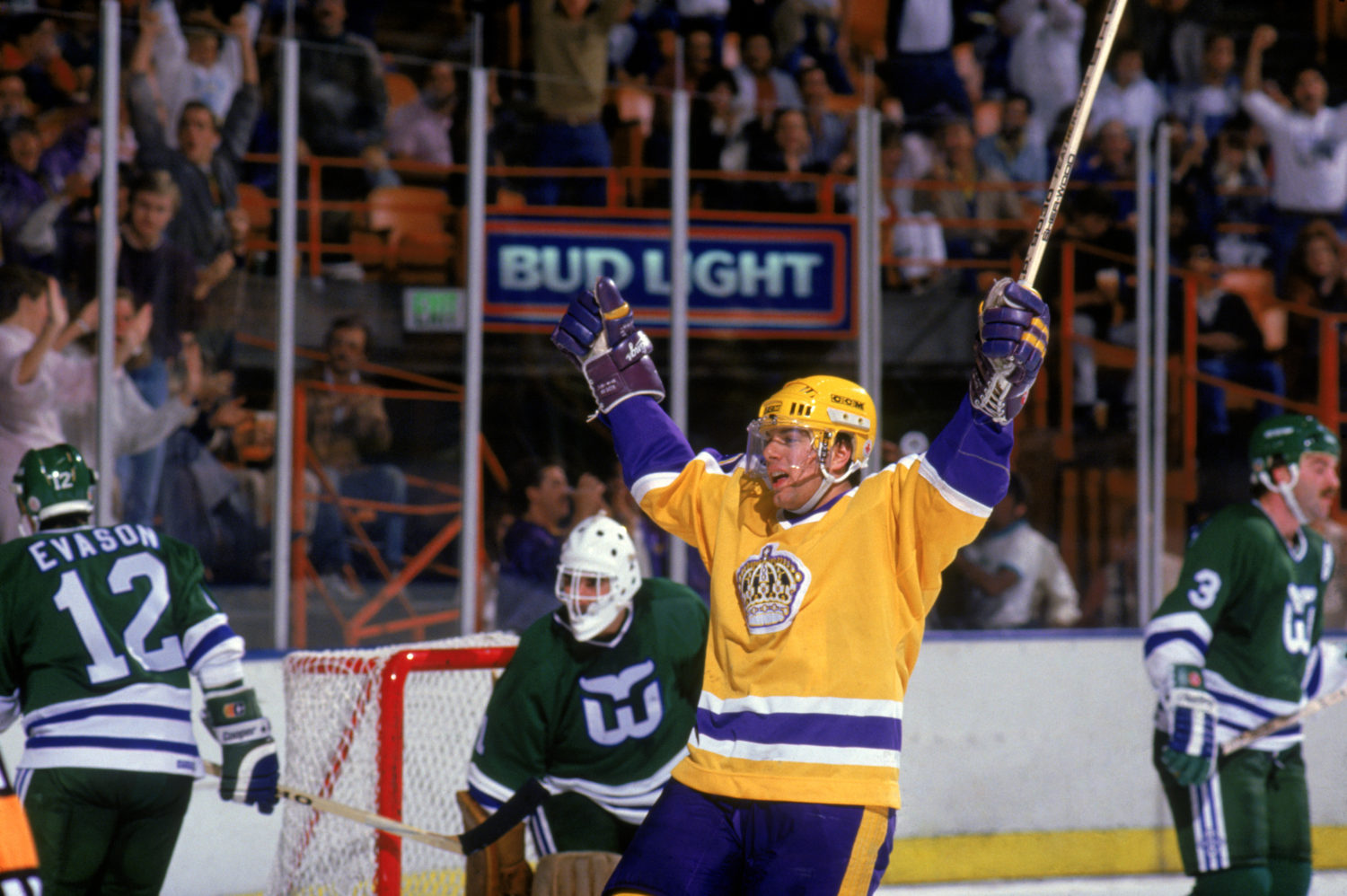 When the Kings make their selection at the 2020 NHL Draft in October, it will be the first time they’ve selected second overall since bringing Drew Doughty into the organization in 2008. But before Doughty?

That honor belongs to Jimmy Carson, the high-scoring winger from Michigan, whom the Kings selected at number two in the 1986 NHL Entry Draft.

Carson’s hockey story begins with a Kings connection that didn’t come full circle until 2019. Growing up in Michigan, Carson played youth hockey for the famed Compuware program, under the direction of the late Real Turcotte, grandfather to now Kings prospect Alex Turcotte.

It was playing for Real that Carson first gained the notion, though just 12 years of age, that playing in the NHL was a possibility in the future.

“I grew up with them in Detroit and Real was my coach at Compuware,” Carson said. “He’s the first guy who told me, when I was 12-years-old, he looked at me and said you can play in the NHL. Of all my coaches, and I had a lot of good coaches, he’s the one who gave me that ‘you can do this’ at 12.”

In their history, the Kings have selected two Americans in the Top-10 – Carson in 1986 and Turcotte in 2019. Full circle, if you will.

The draft was not quite the same event back in 1986 as it is today, especially for what was then a non-traditional hockey market in Los Angeles. This was pre-Stanley Cups, pre-Gretzky trade, and as Carson put it, “pre-a lot of things.”

Holding the number one selection that year was Carson’s hometown team, the Detroit Red Wings. He noted that there was some chatter about whether he’d go first overall, considering the Michigan connection, but also that the Red Wings made it known early and often in the draft process that they would plan to select Joe Murphy with their pick. That left the Kings at number two as the first real selection.

As he had interviewed with Los Angeles, Carson entered draft day with maybe a bit of a feeling he might be selected by Los Angeles, but not knowing for sure until the moment occurred.

“I had gone for an interview with Rogie Vachon, the GM, Pat Quinn, Matt Murphy, the brass and I had a good feeling that I had done well in the interview,” Carson said. “I heard through the grapevine that they were possibly going to take me, but I had no insider knowledge.

“Until it happened,” he continued, “you don’t know.” 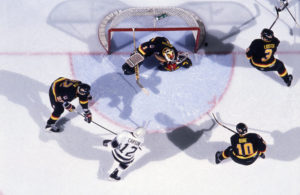 Entering training camp in 1986 with a Kings team that had won just 23 of 80 games played a season prior, an opportunity presented itself for an immediate impact for the then 18-year-old Carson. And boy did he capture it.

Though he entered with grounded expectations, Carson not only came into camp and made the team, but he turned some heads doing it, as he collected 37 goals and 79 points, playing in each of the team’s games that season. Joining a squad that had missed the postseason in three of the previous four seasons, Carson became a part of a group of highly skilled offensive players that led the Kings to a 17-point improvement in the standings.

Looking back, though it was not his hometown Red Wings, the Kings turned out to be the perfect fit for the native of Michigan.

“I think there’s some truth to that,” Carson said of the strong fit. “I think there’s also some truth to the fact that it was the old Smythe Division, and it was a different style of hockey back then. I was an offensive player, and suddenly you’re in a situation with Dave Taylor, Marcel Dionne, Luc Robitaille, Bernie Nicholls and it’s like okay, we need to create some offense. I think it was a good fit that way.”

Taylor, Dionne, Robitaille, Nicholls. Not a bad collection of linemates or teammates. 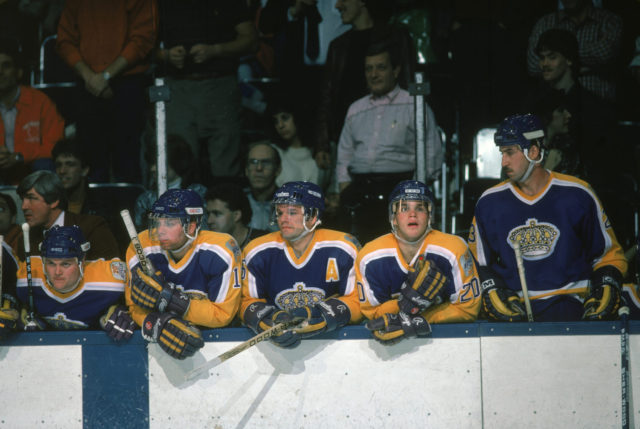 The Kings qualified for the playoffs as the fourth seed in the division in both 1987 and 1988, with Carson leading the team, and ranking third in the NHL, with 55 goals as a sophomore during the latter campaign.

Then came the trade. THE trade.

Carson had expected to be a long-term player with the Kings, as he was told by ownership that he was one of the building blocks for the future, but things changed when Wayne Gretzky was acquired, with Carson as the centerpiece heading the other way to Edmonton.

Two seasons after he was a leading goal scorer with the Verdun Junior Canadiens of the QMJHL in his draft season, Carson returned North of the border and posted another 100-point campaign with the Oilers, outscoring the likes of Mark Messier, Esa Tikkanen and Glenn Anderson in doing so.

He was eventually moved to Detroit in 1990 (oddly enough, in a trade for Murphy, the only player selected before him), playing in his home state for a few seasons, before a return to the Kings during the 1992-93 season put Carson back where it all began, though things were different this time around.

No longer was hockey an afterthought in Southern California, as the Kings earned a postseason berth and danced their way to the Stanley Cup Final in 1993.

“It was weird,” Carson said on returning. “It’s funny, Bruce McNall told me, I’m going to get you back. You hear it, and you don’t really believe it, but okay. So, when I came back, it was a totally different feel, everything that I had remembered, it was different. There was more media, everything was centered around Wayne, it was media galore.”

Certainly, more hype than the draft a few years prior.

Carson had 12 goals and 22 points from 34 games in the second-half of the season, as the Kings posted a total of 39 wins and 88 points, entering the postseason for the seventh straight time, a streak which started with Carson’s 1986-87 rookie season.

“When I got there, Wayne was hurt and we had that nice run into the playoffs, into the 93 Cup Finals,” he remembered. “It was great to be back, it was a great run, but it was a different personal feeling for me, then it was a few years earlier.”

Enter the playoffs, and the Kings were underdogs in Round 1 against the Calgary Flames, just a few seasons removed from a Stanley Cup championship themselves.

Carson went out and scored twice in Game 1, followed by twice more in Game 2, as he led the team with five goals in a six-game series victory over the Flames.

The veteran forward’s presence helped the Kings on their Cinderella run through the Western Conference, on route to their first opportunity to play for the Stanley Cup. 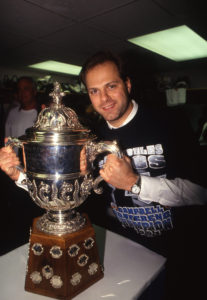 “It just felt good,” Carson said. “When you’re in the playoffs, you just want to win that game, win that series, get to the next series. Yeah, it felt great.”

Though the Kings ultimately lost that series, and Carson played just 25 more games in the Kings jersey, it was a memory, both for himself and the Kings franchise, that lasts a lifetime.

While he’s no longer in the game of hockey – he’s built an established career in financial services – Carson still goes down as one of the more successful high-round draft selections by the Kings. His Los Angeles career finished at exactly a point-per-game (219 from 219), and both directly and indirectly, he helped revitalize the Kings franchise in ultimately reaching the Final in 1993.

“It’s what every player dreams of, number one, and it was so amazing to see the city so excited, enthused,” Carson said of playing in the Cup Final that season. “I think when the trade happened, it elevated things and then the Ducks expansion and the Sharks come into the league, hockey in the Western part of the United States became more popular. But when the Kings went to the Stanley Cup Final, the whole city, the whole state was just going crazy for the Kings. I think that’s when hockey took a real strong foothold into the State of California. It was just a lot of fun to be a part of it.”