How do you replace Rogie Vachon in net in Los Angeles? Mario Lessard was tasked with that challenge, and he delivered an All-Star effort.

In 240 regular season games with the Kings, Lessard was the man between the pipes. After recording 23 wins as a rookie in 1978-79, his best season came two years later when he led the NHL in victories with 35 and earned Hart Trophy votes.

During the Miracle on Manchester game, Lessard provides detail from his vantage point on the ice, including a near sixth Edmonton goal by a future Hall of Famer that nearly stopped the famous rally and, according to the netminder, his heart rate. 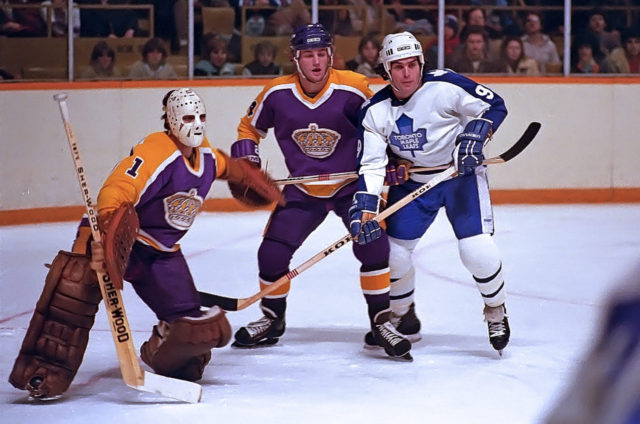 With the help of his son, Marc, Mario answered the following LA Kings Insider questions from his native Quebec:

Q: How do you reflect upon your six-year NHL career, all with the Kings?
A: I am very proud of what I have accomplished. For a young boy who was born in East Broughton, Quebec, a small town of only 2000 people, I always followed my childhood [dream] of playing hockey with the best and in the best league — the NHL. I will always be proud to have had my chance to play with the Los Angeles Kings and wear the yellow and purple jersey for all my career.

Q: Going back to your rookie season, you played in 49 games. At that time, did you think you were prepared for that job?
A: I had always been a number one goaltender for all my career. I thought I was prepared for that after playing four years in the minor leagues. I was named on the IHL First All-Star Team with the Saginaw Gears in 1976 and named on the AHL Second All-Star Team with the Springfield Indians in 1978. So, yes, I think I was up for the job. It was my time to take over when Rogie left for Detroit.

Q: Was there immense pressure in replacing, so to speak, Rogie Vachon?
A: Rogie was my childhood idol. I watched him play with the Montreal Canadians when I was young. We are eight years apart, so I remember him playing for Montreal Canadians and he was my inspiration. I learned at a young age how to play goalie just by watching him on TV. The way I played goalie was influenced by Rogie’s style. So, did I feel pressure to replace Rogie in net? I’ll say no. But it was an honor to play with the Kings who believed in me and gave me the chance to replace my childhood Idol.

Q: What was your relationship like with Rogie and the other goalies you played with in LA over the years?
A: Rogie has always been a good mentor to me. Each training camp I learned more and more of how he played the game. I had the chance to play with and against him during training camp. I had a great relationship with my fellow goaltenders also. It was always a great experience to meet all those great players.

Q: What was the transition like for you going to Los Angeles and only speaking French?
A: I had fortunately already learned English being four years in the minors and even with my French accent, I was able to make myself understood. My wife, Louisette, was always there by my side to help me at home. During the practices and for road trips, my good friend Marcel Dionne was not too far away to help me.

Q: Did you like or dislike playing in a market that was not considered a hockey hotbed?
A: It was such a great honor to be there. My goal was to give a great performance and help build bigger audiences for all the games. I am very happy to see the success of the team today and to have been a part of it. In my career, I have seen more and more fans in the stands. With the success of our team with the Triple Crown Line and having won over the Oilers in the playoffs, for sure L.A. is a hockey town!

Q: Who were some of your favorite teammates with the Kings?
A: I have lots of good memories with my teammates! To name a few: Dave Taylor, Charlie Simmer, Marcel Dionne, Doug Keans, Jimmy Rutherford and many more. 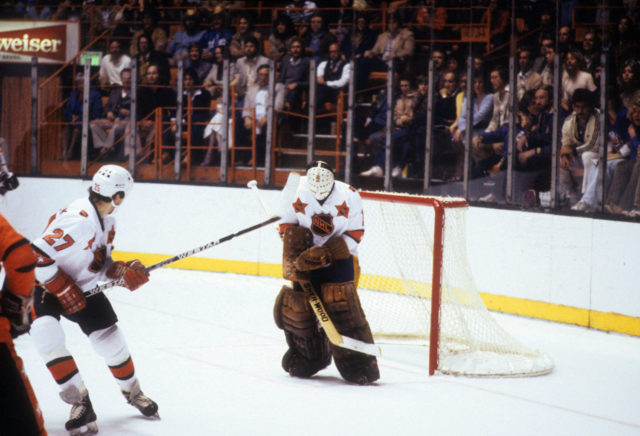 Q: Was your appearance in the 1981 NHL All-Star Game at the Forum one of the highlights of your career?
A: It was such a great moment playing with the best, a great honor, but my first game ever in the NHL was most important since it led me to my NHL career. It was a do or die game and I had a shutout against the Buffalo Sabres. There was a lot of pressure for that game, the coach Bob Berry told me it was my only chance to prove what I could do, otherwise I was going back to the minors. I gave them no reason to send me back! We won the game 4 to 0 and I was the first star of the game.

Q: What do you recall about the moment the Triple Crown Line were announced as one unit at that All-Star Game?
A: It shook the house and I had the crowd behind me as well. I was honored to experience that moment. It was being with the best in the game.

Q: What you are your most vivid memories of the Miracle on Manchester from your spot on the ice?
A: The Kings were expected to be easy prey for the Oilers in the first round. They had a terrific attack with Mark Messier, Jari Kurri, Kevin Lowe, Glenn Anderson, Paul Coffey and Wayne Gretzky. So, I knew that all the saves I was making were very important to give us a chance to win! After two periods, we were losing 5-0, not the score we were planning on. We had a team with a lot of character and we managed to change the momentum. After it was 5-3 Oilers, I remember Garry Unger had a major penalty of five minutes. I’m sure we took away the Stanley Cup from the Oilers with that penalty! We made it 5-4 with less than four minutes to go in the third period. With a man advantage still, and me on the bench for an extra player, Steve Bozek scored with only five seconds to go! It was like living a dream at 5-5. I remember in overtime Mark Messier shot a bouncing puck on me. I was way out of my goal crease lying down on the ice. Looking at Mark going on an empty net. He shot backhanded and missed the empty goal by one foot! My heart stopped at that moment. What a game! Not long after that Daryl Evans shot on a face off and scored! Kings 6, Oilers 5! The greatest comeback I ever played in my career. From that moment it created a hockey buzz in L.A.

Q: Can you talk about your post-playing life back in the Montreal area?
A: I had the opportunity to work for Labatt brewery for 30 years. It gave me the chance to have great coworkers who reminded me of a team spirit and helped me fit in.

Q: And, finally, you and your son Marc always make it to Kings games in Montreal. Do you circle that game on the schedule each year?
A: Yes, it is a pleasure to watch the Kings live in Montreal and meet some of the guys with the help of Jimmy Fox and Daryl Evans. We are looking forward to that moment again, and to when my family and I can again attend a Kings game in L.A.