Within one year, the LA Kings and Buffalo Sabres made two separate trades that, despite some odd crossovers, ultimately helped shape the depth of the Kings back-end for several years, most notably with the Stanley Cup win in 2014.

The first trade occurred on April 1, 2013 when the LA Kings acquired Robyn Regehr from the Buffalo Sabres for two second-round draft picks (in 2014 and 2015). Regehr quickly became a staple on the Kings back-end, contributing mostly in a shutdown presence. In the 2013 Stanley Cup Playoffs, he played in all 18 games, averaging over 21 minutes a night while ranking second on the team in shorthanded time on ice behind only Drew Doughty.

He was so crucial to the teams’ success, that they didn’t even wait for the playoffs to end to sign the pending free agent to a two-year, $6 million dollar contract. Unfortunately, the Kings chance at repeating as Stanley Cup champions ended at the hands of the Chicago Blackhawks in the Western Conference Finals.

During the 2013-14 season, Regehr featured in 79 games, becoming a centerpiece on the penalty kill. But when that season’s trade deadline approached, the Kings and Sabres hooked up for another trade deadline deal. This time, the Kings sent two promising prospects (Nicolas Deslauriers and Hudson Fasching) to the Sabres for Brayden McNabb, the rights to Jonathan Parker and two second-round picks. Those two picks were the same two that the Kings sent the Sabres for Regehr.

While McNabb (AHL, Manchester Monarchs) and Parker (ECHL, Ontario Reign) would finish the 2013-14 season in the minor leagues, Regehr and the Kings entered the playoffs eyeing the second Stanley Cup in franchise history.
The playoffs opened with Regehr and the Kings facing off against the San Jose Sharks. Despite falling into a 3-0 series deficit, the Kings stormed back with four-straight wins to move on to the second round. Regehr finished the series second on the team in total time on ice while leading the team in shorthanded time on ice.

In the second-round series against the Anaheim Ducks, Regehr suffered an injury in Game 1 that would ultimately sideline him for the rest of the playoffs. While his on-ice presence would be missed, most people knew his significance extended off the ice as well, and the Kings would go on to capture their second Stanley Cup in franchise history that year.

Following the season, Regehr announced his retirement from professional hockey. As an LA King, he finished with 29 points (6-23=29) in 158 regular-season games while adding three points (0-3=3) in 26 playoff games and winning the Stanley Cup in 2014. 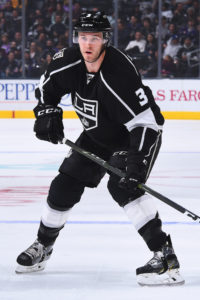 McNabb would go on to play two more seasons for the Kings. Over his three full seasons in LA, he was the primary partner on the back end for Drew Doughty and posted 42 points (6-36=42) in 201 regular-season games. He was selected by the Vegas Golden Knights in the Expansion Draft before the 2017-18 season.

As for the rest of the trade pieces? For the Kings, they used their reacquired second-round picks to select Alex Lintuniemi in the 2014 NHL Draft and Erik Cernak in the 2015 NHL Draft.

Cernak became a focal point of the deadline trade that brought Ben Bishop to LA for their hopeful run to the postseason during the 2017-18 season. He has played the majority of the last two seasons with Tampa Bay, appearing in 125 games.

Jonathan Parker and Alex Lintuniemi never quite made it to the NHL. Parker played professionally from 2011-2016, primarily in the ECHL, and Lintuniemi played mostly in the AHL before signing a contract in his home country of Finland during the 2019-20 season.

As for the Sabres, Nicolas Deslauriers appeared in parts of four season with Buffalo, posting 30 points (12-18=30) in 211 regular-season games. He was later traded by Buffalo to Montreal for Zach Redmond and now plays for the Anaheim Ducks.

Fasching only appeared in 22 games with Buffalo over three seasons, spending most of his time in the AHL. He posted three points (1-2=3) in those 22 games before later being dealt to the Arizona Coyotes.

Arguments can be made over how these two initial trades were perceived at the time. Second-round draft picks hold high value and, at the time of the second trade, players like Deslauriers and Fasching were deemed promising prospects who could develop into a contributing NHL players.

Fortunately, as time passes, Kings fans can look back on those two trades with appreciation. Not only did Regehr and McNabb become integral parts of the Kings back-end and play nearly 400 games combined (regular-season and playoffs), but Regehr’s contributions, specifically, played a factor in the Kings’ Stanley Cup win in 2014.

NOTE – Eddie Fischermann works for the Kings and is one of many contributors to LA Kings Insider during this time. Our organization understands the importance of LAKI to you and remain committed to evolving the platform and providing even more content once we resume usual operations. 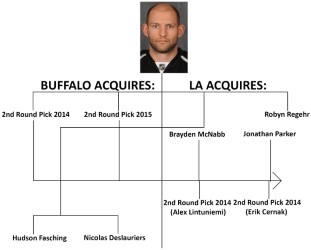