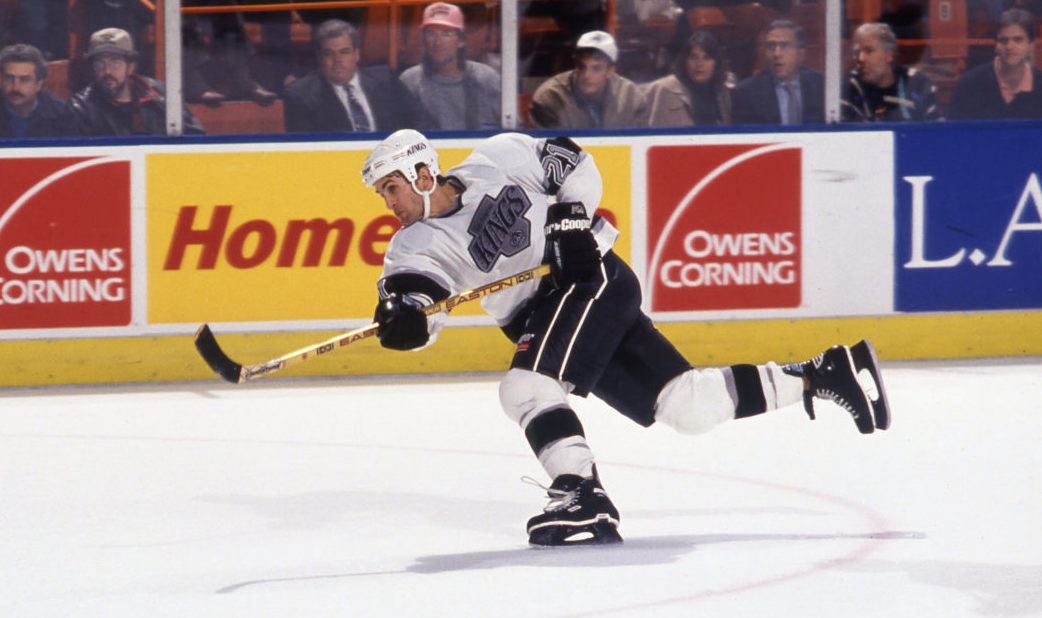 A fan favorite in LA during his seven seasons with the club, Granato on the ice was both feisty and productive, including three straight 30-goal seasons.

Following a 13-year NHL playing career that spanned 380 games with the Kings (plus 52 playoff games including his key role on the 1993 Kings and their run to the Stanley Cup Final) he also excelled with the Rangers and the Sharks before he transitioned into coaching. He has served as head coach with the Avalanche and as an assistant with the Red Wings and Penguins.

Granato currently works at the University of Wisconsin as the head coach at his alma mater. He has been on the job in Madison for four seasons, and Alex Turcotte, the Kings’ number one draft pick in 2019, played under Granato this past season before turning pro in March.

Q: How are you enjoying your role at Wisconsin?
A: I love the fact that I am working with young players who have a dream of playing in the NHL. Our school has a tremendous amount of tradition and history – 87 guys have played in the NHL including a future King in Alex Turcotte. My goal now is to help these young players. I would love for them to have an opportunity at a career I was fortunate enough to have. That part has been a lot of fun as has being back on a college campus and being around young student-athletes. It is great. 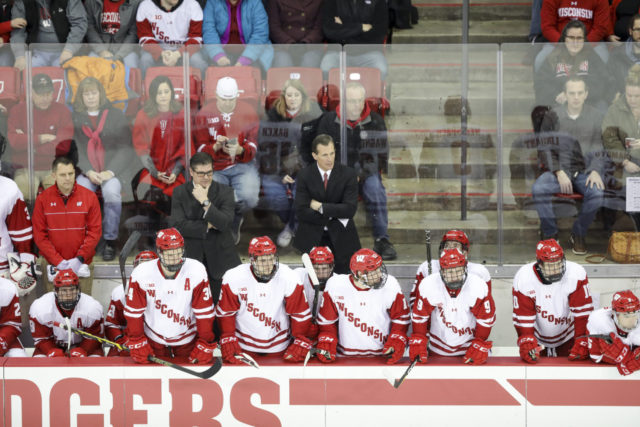 Q: When did coaching come into focus for you?
A: It was in 1996. I had the head injury and it was potentially career-ending. At that point the game was taken away from me for six months. It makes you ask yourself a lot of questions and it comes with a lot of anxiety for sure. I was able to come back and play but it was then that I started to plan a post-playing career. Hockey has always been special to me and my family. My dream was to stay in the game and to keep that as part of my life. It has been a family sport. I tried broadcasting but missed the team component. Then I got into coaching with Colorado and I have gotten to be around some phenomenal players since. I have been lucky to work with great general managers too.

Q: What are biggest changes in college hockey now compared to your time?
A: I think the mindset of the players is different. Back then you got drafted and rarely heard from your pro team. Now you have the player development aspect. It is full-time and it impacts the guys who are drafted. With the Kings it is guys like Mike Donnelly and Jarret Stoll in conjunction with Rob (Blake) and Luc (Robitaille). Kids now are under more of a microscope and it moves fast and the kids need to be ready. The skillset and quality of depth in college hockey now is remarkable as well. With 60 D-1 teams there is not an easy game. The 55th ranked team will go out and find a way to compete with skill and effectiveness that makes you work for every inch of ice. But the big thing is the development departments that NHL teams have now. I was also lucky to have played with so many good players during my time in college.

Q: Did you envision Rob Blake, then your teammate with the Kings, as a future GM?
A: First off, Blakey was one of those teammates who had your back. He knew the game but he also understood camaraderie. He was good at making your teammates understand the connection between the locker room and the ice. He is a team player. Rob, like myself, was lucky to have played for captains like Wayne Gretzky and Luc and Dave Taylor. Those guys all learned from one another and cherished the environment to push each other and to be better. Let’s not forget that Rob came from a small town of Simcoe, Ontario. When he got to LA it was a little culture shock. But his adjustment, learning and paying attention to what goes on around him is tremendous, as is his work ethic. He has a willingness to try and find ways to get better. Some GMs today were seemingly handed jobs because of who they are. Rob Blake worked his tail off and prepared and grinded to get to where he is at today. He is detail oriented and I really admire him. He is set up nice with his staff – development and building though the draft. Lots of depth. The Kings are in a great position to have success. I personally am excited.

Q: Why is Luc Robitaille the face of the organization?
A: Just spend some time with him. I remember being with him recently at STAPLES Center. We were together and working our way to where we were sitting and you saw the way he interacts with people and fans. He shakes hands with everyone. He takes the time to show each person how grateful he is for their support and for their love of the Kings and hockey. He is just a special person. He enjoys people. To be where he is at from where he started, in terms of the draft, he is all about digging in and being thankful and showing that work ethic off the ice. He loves the opportunity he has and has repaid the team and the city back in so many ways. It shows what kind of person he is. He is grateful. Luc has been the constant with the Kings all those years. It has been fun to watch and has kept us connected with the team as well.

Q: I will toss out some names. Can you give some quick answers on each of them? Starting with Jari Kurri.
A: Classy. Funny. When I became his roommate, I never would have guessed how funny he would be. In addition to being classy he is one of the greatest goal scorers in NHL history.

Q: How about Kelly Hrudey?
A: Competitive. He did not have the goalie mentality as a teammate. Most goalies are a little goofy. Kelly was just one of those guys who fit well in terms of mentality and being hard-nosed. I loved his competitiveness. He was a special, special teammate who would go through a wall for you. Character.

Q: And Marty McSorley?
A: Marty is another guy who had your back. When I got traded to LA my wife was scared he was going to beat me up for something I did to him when I was with the Rangers. Marty is really a kind, gentle giant who is funny and backs you up on the ice. He also was a hard worker who turned himself into an all-around hockey player. He was big and physical of course but he also was the last guy off the ice as he would constantly put in extra work to become better.

Q: Should Dave Taylor be in the Hockey Hall of Fame?
A: Absolutely. I am behind that 100 percent. He was an unbelievable leader and competitor. He was quiet in that he came the rink and did his work, but he also did it with class and in a hard-nosed style. He is a winner who does all the little things in a game to help his team. I would cherish that moment and be there in Toronto. 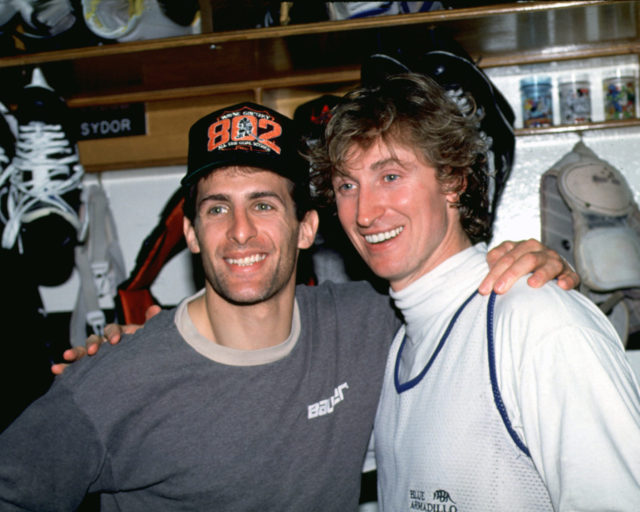 Q: What is something about Wayne that is not very well known?
A: I hope there is some type of footage, like the Michael Jordan documentary, that goes back and really shows what it was like to be him, to be with him, daily in and around our locker room. His understanding of what he meant to hockey is what I appreciated the most. Back then, hockey was more regional. It wasn’t going to work in different places if he was not on board with helping sell and grow the game. Think of how the game grew when he came to LA. He took that responsibility on his shoulders. He was the one who could do that and every single second of his day someone wanted Wayne. Shaking a hand, a picture, an autograph, an interview. I watched that as a friend and teammate and wondered how he could always keep his happy face on. He did a better job than anyone else could have. I have great respect for him being the face of our game and for him helping bring our game further than what many would have thought was possible.

Q: And, finally, you recently participated in an LA Kings Legends video session with former Kings teammates Mike Donnelly and Corey Millen. How much did you enjoy reconnecting with the All-American Line?
A: It was fantastic. I do keep in touch with Mike more due to his job with the Kings. Corey is still working in hockey and I get to talk to him a few times a year. To be back with both brought back a ton of memories. We had a lot of fun as linemates. It didn’t take long in that video to see who was the tallest. We were probably the shortest line in hockey then and usually a small guy gets put with big guys and it is very rare to see two, or three smaller guys together. I think we collectively took that as a challenge. We didn’t care who we lined up against and I think all three of us are proud of our line and the way we played. Thanks to the Kings for doing that.