Assistants share player evaluations, their focus upon a resumption of play 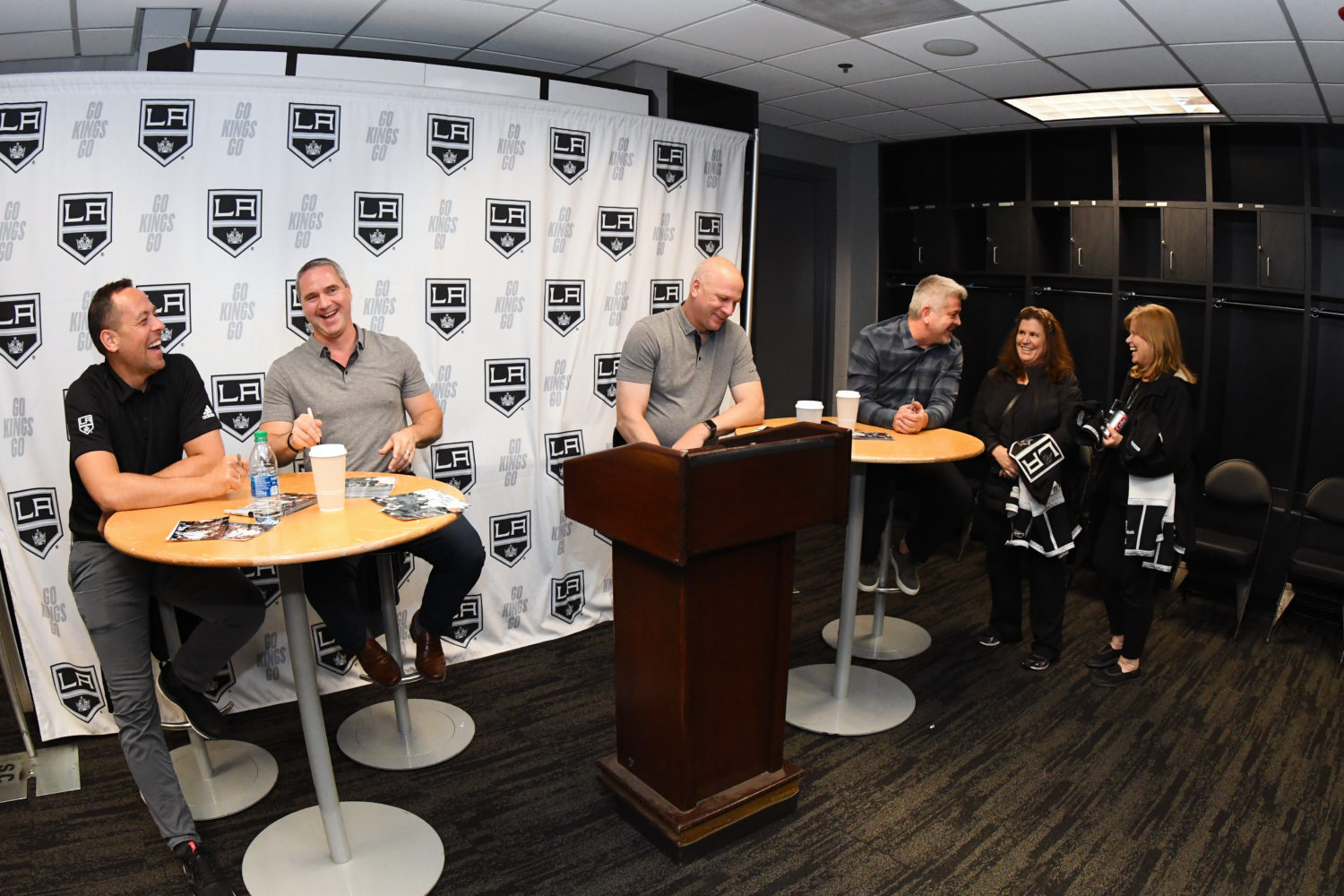 INSIDERS. A fine Monday afternoon to you, if that is indeed what day it is. Yuk yuk yuk.

— These are uncertain times. When the team gets back together – whether to resume the current season or to begin a new one – what core responsibilities of Bill Ranford, Marco Sturm and Trent Yawney’s duties become a “priority?”

TRENT YAWNEY: Penalty kill
He liked the PK after a gruesome 10-game segment early in the season. L.A.’s kill began the year on a hellacious 33-for-49 stretch through 13 games, producing a 67.3% success rate well eclipsed by the 80.9% rate over the following 57 games. (Vancouver’s 80.5% rate was the league’s median kill prior to the hiatus.) Had that rate been improved at the start of the season, “that would’ve been added points for us,” an important haul that provides a more sustainable 82-game journey. But he was happy with the development of the 5×5 play, sharing that he was really encouraged how the group left their own end of the ice. “One of the better teams that I’ve been on in a while that broke out pucks with young D like we did,” he said.

MARCO STURM: Special teams
One key to boosting overall offensive numbers is to improve the power play’s output, an endeavor that gained steam in late December and early January. At five-on-five, he shared that offensive zone fundamentals – “protecting pucks better, shooting better, screening better, making it tougher on the goalies, as well” – would be another area of emphasis.

BILL RANFORD: Goalie workloads
Ranford’s in a unique position, as Fox noted. How will it be best to get the goalies back up to speed and poised to compete at an explosive position requiring a vastly different approach to conditioning? “I think we have to be smart about it as far as workload goes, especially early on,” Ranford said. “This is probably the longest these guys will have gone in their lifetime not having the pads on, so I think we’ve got to be smart that way, but we also have to create a competitive spirit between Jonathan and Cal early on to push each other because it’s going to happen quickly. It’s going to happen fast, you’re going to be up and running, so it’s just going to be important for them to push each other to be their best if we do get up and running again.”

— There was also an interesting study in how the staff interprets analytic data offered, and how the video staff and others curate it for the coaches so they’re best equipped to apply adjustments. “With everything, they understand, for me, anyways, the analytics a lot better than I do. They (Video Coordinator Samson Lee and Assistant Video Coordinator Derik Johnson) can explain it to me in more of a layman’s terms more than the numbers as such. I utilize those guys a lot. They have us so prepared. It makes our job so much easier to prepare the team – whether it be on the penalty kill or individual stuff.”

Lee and Johnson also prepare the game-day booklets for Ranford and the goalies, which work in concert with the scoring chance calculations Ranford also compiles. “I think I’m fortunate – DJ does such a great job compiling that stuff for me,” Ranford said. “So, going into a game … I’d like to see the goals against for the last month, month and a half. He’ll have that in a folder for me. Also, you want to look at their chances-for the past couple of games – what they’re trying to do offensively. That’s kind of my workflow leading into a game. Just looking at all that information and then basically just giving a goalie report for our guys, five-on-five and shootouts.”

Ranford, without any sort of context: "Todd's the hammer."

Trent Yawney, on Kurtis MacDermid’s development this season:
Coming in, I knew Dermie from afar and I knew how feared he was in the league. Did not realize how good of a penalty killer he was. But it Billy on board and Billy knowing the players prior to us getting here, he did mention that very early, before we even stepped on the ice – of how good of a penalty killer Dermie was. He basically showed that and took a lot of pride in it. The one thing with Dermie that we talked about, he’s obviously a guy that’s feared throughout the league and has the talent to be able to do that. We wanted to round out his game a little bit. We wanted to get some more minutes out of him, so we gave him a couple things. I’ll be real specific. We gave him the ‘three-second rule.’ The puck has to be off his stick in three seconds. And we wanted to start eliminating – he likes to hit people, but we didn’t want him sacrificing position for physicality. When it was there, we wanted him to take advantage of it, because that’s a strength of his, but we didn’t want him running out of position to try and come up with a physical play rather than be more patient, and to his credit, he did an awesome job with that. He gave us some solid minutes, and he’s so respected and loved by his teammates that he’s one of those glue guys that every team needs, so it was nice to see him get rewarded here with an extension.

Yawney, on Matt Roy’s development this season:
Royzee got off to a slow start. He’s a quiet guy, but he was analyzing things too much as far as not reacting quickly enough. Once he got his game in order, I’ve never seen a young player or been a part of an organization with a young defenseman like Royzee, who was so consistent from start to finish. He was probably and arguably with the coaching staff our best defenseman. … I was looking for more minutes for him. He could’ve handled more minutes towards the end and getting him into the 20-range. He was a real pleasant surprise for me, and I know Marco and Billy had told me about how well he had played down the stretch last year when he first came in, but he’s got a bright future ahead of him.

Yawney, on Sean Walker’s development this season:
He’s a more dynamic guy. He’s got great legs. Likes to go on the offense, and we want that from him, joining the rush, being the fourth man in. He’s one of the few righties I’ve been around that can play on the left side and obviously chewed up a lot of minutes there with Drew. Talked a lot about his defensive game. In the word ‘defensemen,’ there’s the word ‘defend.’ That he wasn’t cheating for offense too quickly in the offensive zone, that he was defending first and then joining the rush. We added the power play to the second unit and late in the year he was starting to get a lot more comfortable. I think you’re going to see a lot of new offensive things come out of Walks as the organization moves forward.

Trent Yawney, on Todd McLellan’s evolution as a head coach:
When I first started working with Todd, obviously he was a first-year young coach with a team that was postured to win right away in San Jose, so he wanted things done a certain way, which all coaches do. Maybe that at some points may be a little rigid, but at time has gone on and he’s evolved with this time in Edmonton and now, his preparation hasn’t changed a whole lot, but the way he presents it to the players has changed. We actually just talked about that the other day. He spends a lot more time talking about maybe our team and teaching through his pre-game prep with certain clips that maybe he did in the past. Much more patient than maybe he was, but that’s just experience. But he’s still Todd. He still has that same drive and passion he had as a young coach. Very smart, very good at making in-game adjustments – that has never changed. Overall, his experience has given him a better feel, and he has always said as a coach you’re always evolving. It definitely holds true because each year there’s usually the foundation part of it, but he changes, maybe, and adjusts somethings here or there, and always has time for everybody. He’s definitely a guy that I enjoy working for. I can’t speak for everybody, but as Billy had mentioned earlier, we didn’t necessarily have the greatest year, but we had a lot of fun and a lot of laughs, and he allows that to happen even though the win-loss column may show up a little bit different.

Marco Sturm, on Adrian Kempe’s progression throughout the season:
He’s an interesting player, he’s a good hockey player. He looks like a hockey player, a very dominant player who can skate. He came a little bit later because of his contract, came in a few days late but still had a good camp but not a good start to the season. It took him a little bit, and then we shifted him from center to wing, and that seemed like that’s where he opened up, a little bit, too – and also playing with Blake Lizotte. It felt like it was a different Kempe, the one that we all know can plaay, and also on the power play, if you look at our power play breakout, he was probably the key guy getting us to the O-zone. I think he’s really dominant, he can be a really dominant player, a very important player for us, even moving forward with a lot more younger kids coming up. I expect from him a lot next year. No more ‘young kid.’

Bill Ranford, on Jonathan Quick’s progression throughout the season:
I think Yawns touched on it a little bit. The multiple goals-against that we gave up on our PK early in the season was really discouraging for not only Jonathan but us as a staff, and when we cleaned that area up, all of a sudden we were in more hockey games and when you’re in the hockey game, obviously one strength of Jonathan Quick is his competitive spirit, and when you now you’ve got a chance, that’s where he really buckles down, a nd I think that’s probably the biggest change. From what we did from a technical standpoint, nothing really changed. Our line was just ‘trust your structure.’ We believe that there’s a way to play, and just trust it. And that’s the biggest thing – when you have a slow start, you want to try different things. I was fortunate enough to convince him to stay within that structure, and it started to turn around. 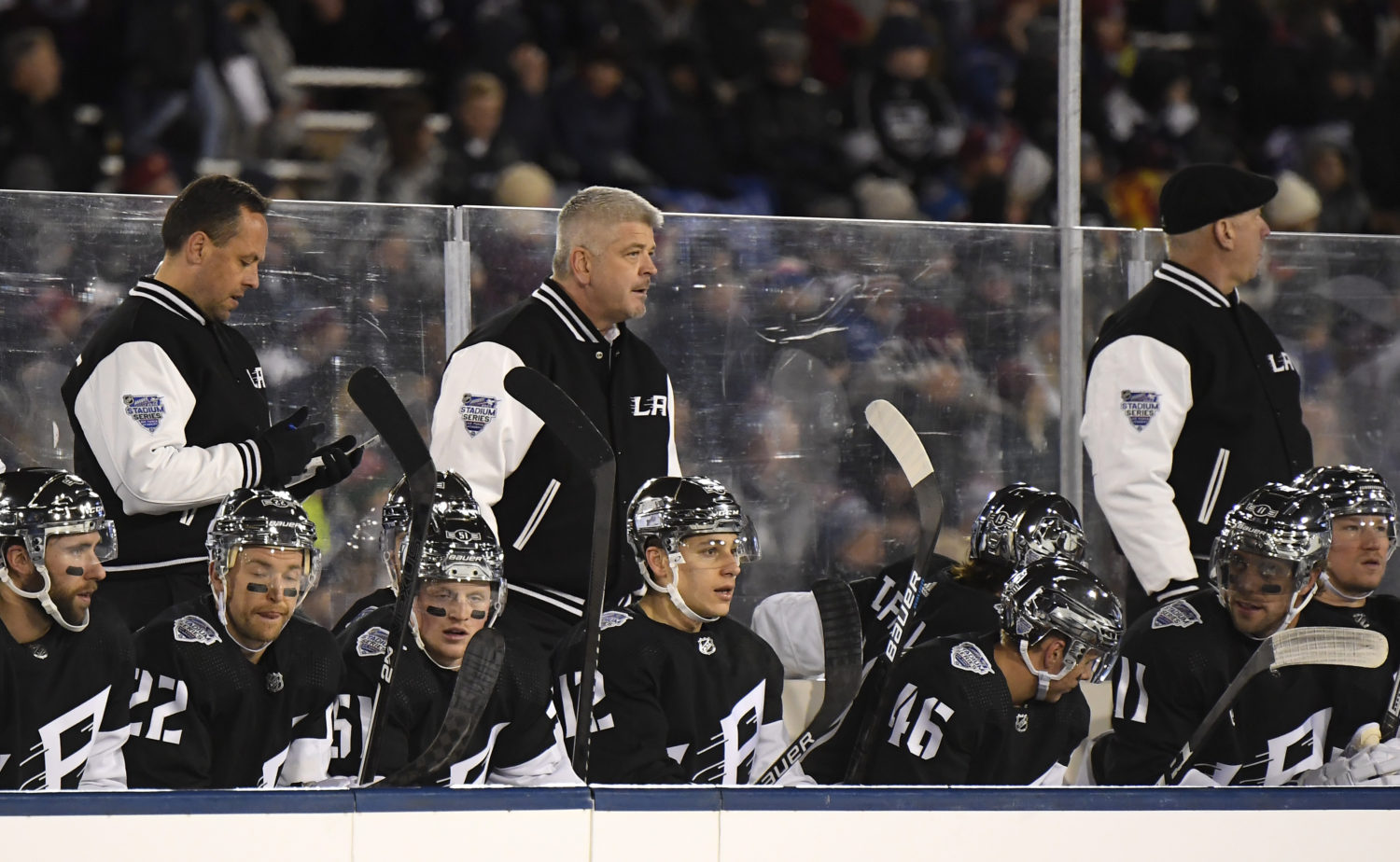