By Zach Dooley For LAKingsInsider.comApril 8, 20200 CommentsUncategorized
via San Diego Gulls

What is my favorite Ontario Reign game? It’s a difficult question to answer, even having been with the team for just two seasons. Even last season, when the Reign struggled on the ice, there were some memorable moments, with the four-goal comeback win over Tucson and the 5-4 comeback win over Iowa coming to mind. Four power-play goals on one major power play to tie, and then win the game was pretty incredible, but considering the stakes on the line this season, it made more sense to select a 2019-20 game.

While I can’t think of a more exciting five minutes than last March against the Wild, it was this past February that I’m going to talk about today, as the Reign came from behind to defeat San Diego, 5-4 in overtime.

The stage was set for a massive game in perhaps the fiercest rivalry in the AHL. The Reign entered the game with 47 points from 44 games played, while the Gulls had 43 points from 40 games played. Depending on the metric you chose, the Reign and Gulls each staked a claim for the fourth and final playoff spot down the stretch run, with the Reign leading in points, but the Gulls ahead on points percentage due to several games in hand.

Both teams entered the game off of victories the night before, with Ontario winning a hard-fought 4-3 game in Bakersfield, and the Gulls 5-3 winners the night prior at home over San Jose. Ontario was riding a four game winning streak and a six-game point streak, while the Gulls were 7-1-1 in their last nine. The stage was set. 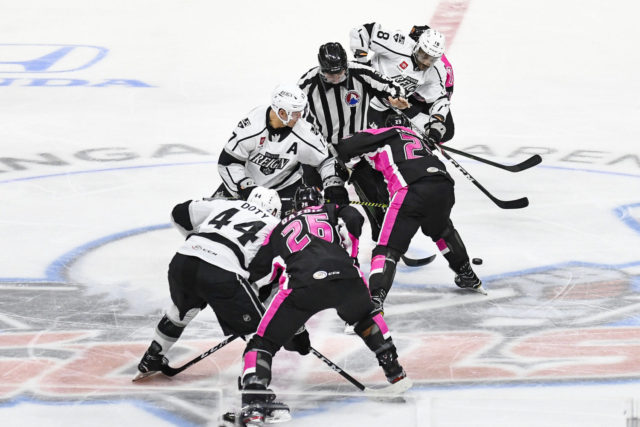 With the Reign being in Bakersfield, it meant a four-hour drive after the game to San Diego. At approximately 10:30 PM, we left Bakersfield by bus and equipment truck for Pechanga Arena. For this particular game, I decided to ride on the truck to help out at the rink with unloading gear, and at around 2:30 AM, we arrived in San Diego – the bus with players and coaches to the hotel and us to the rink. Waiting for us at the arena was a loading dock with a locked gate – the security guard had fallen asleep in his car and (approximately) 30 phone calls later we were finally able to get in and unload. An hour or so after that, it was off to the hotel for a quick sleep.

This particular Reign – Gulls game was special for a few reasons. Not only was it a massive two points on the line in the standings, but the game was to be featured on Fox Sports West, as a part of Hockey Day SoCal, the first time at least in my time here that the Reign played on the network. As a result, a usual 6 PM puck drop was pushed up to 4 PM, meaning two less hours of rest for the group after the late night of travel. I asked Stutts if he felt that would be a disadvantage, and not only did he not care about it, but he emphasized that he’d like every game to be played even earlier in the day……no morning skates? Sign me up!

With the game on TV, it added another element into my game-day duties, which was intermission interviews. Were the Reign winning through the first period, we’d set up a player for a live intermission interview….but with how the game started, this turned out not to be a problem. The Gulls went up 2-0 in the first, and if it weren’t for some timely goaltending from Matty Villalta, it could have been even worse.

After the second goal against, however, the Reign woke up. Mikey Eyssimont scored early in the second period and after San Diego responded, Kale Clague made it 3-2 with a goal immediately thereafter to make it a 3-2 game at the second intermission, with Eyssimont chosen for the mid-game interview with Taylor Felix, who did a terrific job on the “sidelines” during the broadcast.

Points in 🖐️ straight games for Sheldon Rempal, none bigger than his game-tying assist on Saturday! pic.twitter.com/8GOM2fEBzF

The third period was one of the most exciting periods of the season. Gabe Vilardi tied the game at three early in the frame, before Daniel Sprong put San Diego back in front just over a minute later. The Reign poured shots on goal through the entire third period, outshooting the Gulls 15-2, but it took until the game’s final 30 seconds to find the tying goal. Carl Grundstrom got a redirect on a Sheldon Rempal shot to tie the game at 4 and for overtime, which was no less than the Reign deserved.

Overtime had its tense moments as well, until a moment of magic with just about a minute to play gave Ontario the win. Martin Frk lurked in the neutral zone and picked off an errant pass before he went the other way and fed Jaret Anderson-Dolan for the game-winning goal with 57 seconds left on the clock. A huge celebration ensued and the Reign collected the two points.

This game was great for a lot of reasons, but I think the reason it was so special for me was that in our one opportunity to showcase the Reign, the So-Cal Series and the AHL on FSW, the two teams put on a show. It was the most exciting game of the season and thankfully it was the one we got to broadcast. In typical Reign – Gulls fashion, it was a two hour and 46 minute game that cut into about minutes of a pre-planned 60-minute Kings – Ducks pre-game show……sorry about that. For all of the games that go unnoticed, it was cool to see the AHL go center stage for once.

Catch the replay of this game on Prime Ticket tonight (Wednesday) at 5 PM and Fox Sports West tomorrow at 5 PM. 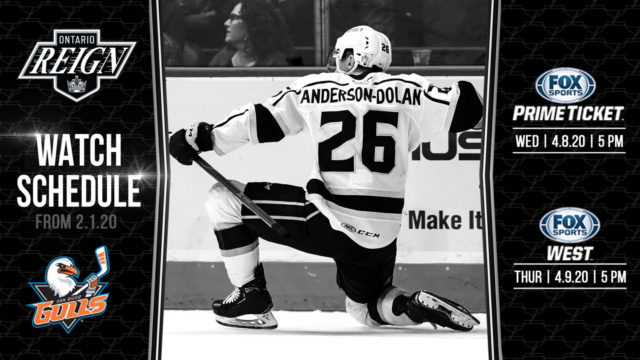