Todd McLellan, on the win and Mikey Anderson’s play:
Well, the win first, because the team always comes first. Happy that the group found a way. I thought we had many opportunities offensively to score more than one or two, but defensively we gave up a lot. They had a lot of opportunities and Quickie stood big and strong in the net. It wasn’t a well-played game on our behalf. Not a lot of detail. Chances for and against. Not the way we want to play, but we found a way to win an ugly game, to win a game where we probably had our B-game, so we’ve got to be somewhat pleased with that. Mikey, good debut. Exciting for him to play his first game home against his brother with his family in the crowd. I don’t think you can write it any better for any young man, but more importantly, the way he carried himself on the ice, he played 19, almost 20 minutes, didn’t make many mistakes. Poised with the puck, good outlet passes. We’ll go back and look at the chances, I don’
T think we’re going to see his number a lot. There are others that are going to show up a lot more than he did, so good for him. Exciting opportunity for him, and good for our organization that somebody else has earned the right to play in the league and gain some experience.

McLellan, on any correlation between the last eight games in which the team has gone 5-2-1:
Good goaltending. I’d say good goaltending and the special team have performed fairly well. It allows us to stay in games and to try and win the games. But the goaltending, both Quickie and Cal have been outstanding in this little home stretch. We’re going to need it tomorrow again. The power play didn’t get an opportunity, but the penalty came up big when it was required. So, that was probably two things that really led to it. Games have been won a lot of different ways. We’ve been sloppy and won, we’ve been a good checking team and won, so we’re a little all over the map. You’d like to clean some things up and be consistent, but That’s where were at right now. We’re going to have to continue to build.

McLellan, on the run of play:
The game, I thought we had a great first period. We couldn’t be happier with the first period we had other than the fact that we were down one. The second period, I thought they were the much better team. They were aggressive, they created scoring chances, played in our end more, and the third period had both elements in it. It was not necessarily run-and-gun, but there was some sloppy play on our behalf and likely sloppy play on their behalf and both teams took scoring advantage of it, yet neither team could really finish, and that’s an indication of good, strong goaltending at both ends.

McLellan, on whether the team can build off their dominant overtime puck possession:
You know, when overtime starts, I think it’s just a completely different world. The construction of the game, the usage of players, the mental approach to that time frame is completely different than five-on-five. It’s so dramatically different right now, and possession’s important, line changes are important, you can tell we kept the team out on t he ice a long time. We didn’t necessarily have to throw the puck away, we were able to hold onto it, get fresh guys out and then they gambled on their change and it cost them. But possession’s the biggest thing. Winning a faceoff and maintaining puck control, it’s not a secret. Every team in the league knows that. That’s why that opening faceoff is so key.

McLellan, on goals for the upcoming nine-game home stand:
Well, we want to move the needle, and that’s collectively. We’ve got a group of players that feels a little bit like early in the season right now. There’s a lot of different faces that are familiar with the system, the structure of how we want to play, but it needs to get polished up, they need to get used to working with each other, so we’ll just keep moving the needle, work on special teams, work on the pace of our play. I don’t think it’s as high as it can be, and some of that’s just the skill and the passing. Other parts of it is the skating and the execution, but we’ll keep working on that. Nine games at home is a long, long time. It’s not something that I think is healthy, but we’re going to try and do our best to be a better team coming out of the back end of it. [Reporter: You said you don’t think it’s healthy. Do you feel like guys get too settled in?] Yeah, I think that it’s just hard to play at home that long. You’ve got to go on the road, especially when you’ve already played five. And me saying that, that’s also a reflection of how much we were on the road from December first on. So, let’s hope that going forward for however many more years the organization’s going to play here, which is going to be a long, long time, that we can find a better way of throwing those games on the calendar.

Adrian Kempe, on systematic improvements and the team’s 5-2-1 stretch:
I think the system has been good. First of all, obviously tonight, it wasn’t our best game, but I think lately, the last couple weeks, it’s been good and there’s been some tight games. Last game against Pittsburgh was solid from us as well. I think everyone is just bringing what they can, the effort and everything like that. That shows up in the results as well that we didn’t get a couple weeks ago. So, it’s nice to have some wins now, too.

Mikey Anderson, on battling for a puck with his brother on his first shift:
We’re used to it, we’ve done it a lot growing up. Obviously, it’s a different setting, but it’s fun being able to start the game with him. … At that point, it’s game on, so it’s kind of just playing the game, but it’s pretty special. Like I said, both being able to be in the starting lineup for the game made it that much more special.

“Being able to be a part of the game is pretty special and everything lined up to have me play Joey, so that made it all that more special for the family”@miklovin8 sits down with @CarrlynBathe to talk about his storybook NHL debut@LAKings | #LAKingsLive pic.twitter.com/0mzqW1Vcdm

Alain Nasreddine, on MacKenzie Blackwood’s performance:
It’s an easy one. He was strong once again. Not that we gave up a whole lot in that third, but that flurry of point-blank shots from the slot, and from the net front, he made those big saves to help us get a point.

Joey Anderson, on playing against his brother, Mikey:
I don’t know that we were on the ice together a whole lot. But you know, it’s super special to be able to see him in this league.

Anderson, on how the family felt today:
Obviously, they’re all super excited to be able to be here and see it happen live. It’s pretty special. For the opportunity for us to play in the same NHL game, it’s something that most families can only dream about. I’m just really happy for him. He played really well tonight.

Pavel Zacha, on New Jersey’s play in overtime:
I mean, they [the Kings] were smart. They kept the puck and made us tired. Then scored. When we got the puck, we tried to shoot, but turned it right over. They just played way smarter than us and won the game.

–Today was the sixth time in franchise history that the LA Kings have played on Feb. 29, with the last time coming in 2004 against Anaheim. They hold a 3-2-1 record on Leap Year Day.

— Mikey Anderson appeared in his first NHL game, appearing in 18:59 while registering three hits, one blocked shot and one shot on goal. He was on the ice for both goals in regulation. Among defensemen, Drew Doughty (28:09), Ben Hutton (22:59) and Matt Roy (20:55) finished with more ice time, while Sean Walker (17:38) and Kurtis MacDermid (13:36) finished with less. 39 seconds of his time on ice was spent on the penalty kill. 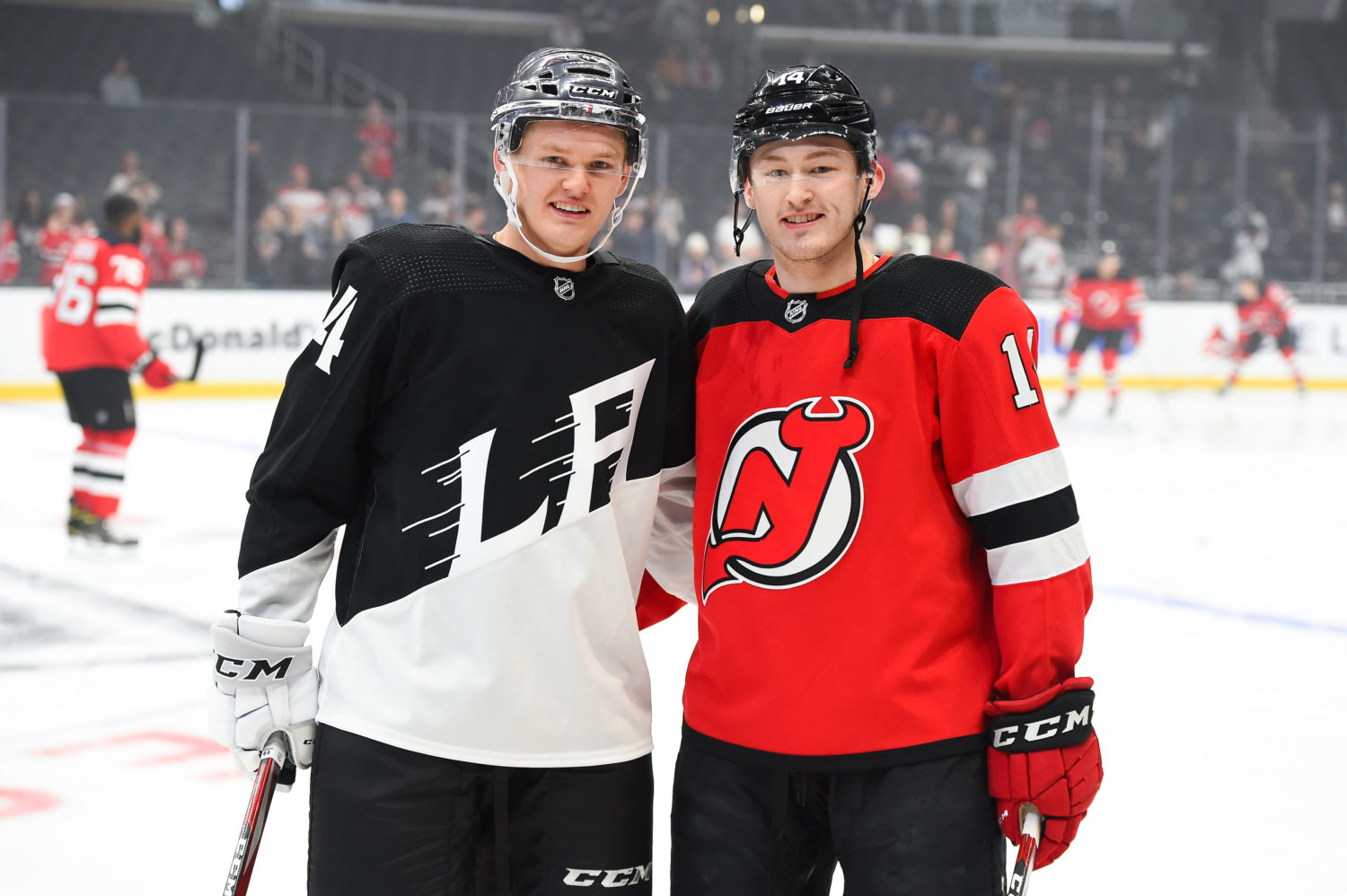