Carter LBI, day-to-day; Vilardi debut; 22 games for several players to "figure out" where they fit in - LA Kings Insider

INSIDERS. Today is a busy day. I have found that all days over the last three weeks have been busy days. Today is especially busy. And not only because the Florida Panthers are in town (7:30 p.m. / FOX Sports West / FOX Sports GO / LA Kings Audio Network), but because there was an absence at today’s skate, two new guys and some accentuated Todd McLellan observations. Let’s get down to brass tacks. Los Angeles aligned thusly:

— Jonathan Quick left the ice first at the morning skate and is expected to draw the start versus the Cats, against whom he’s 8-4-0 in his career with a 2.26 goals-against average, a .922 save percentage and one shutout. Joakim Ryan and Nikolai Prokhorkin remained on the ice for extra work and aren’t expected to play tonight.

Jeff Carter, meanwhile, has a lower-body injury and didn’t skate. McLellan nipped all budding conspiracy theories by opening his media scrum with a declaration. “Carts is injured, he’s not sitting out for precautionary trade reasons. He’s injured, so we can put that to rest right away,” said McLellan, who indicated that the injury took place in Winnipeg but became sore during Wednesday’s day off. “Day-to-day right now, but hopefully he’s good for the weekend.”

— Their vitals: No morning skate for Florida one night 4-1 win at Anaheim in which Sergei Bobrovsky stopped 35 of 36 shots. Don’t be surprised to see Sam Montembeault get the nod as the visitors attempt a three-game California sweep before venturing to Vegas and Arizona. Montembeault, 5-3-1 on the year with a 3.30 GAA and an .890 Sv%, has defeated the Kings twice over as many appearances. He made his fifth career start against Los Angeles last March and benefited from late Jonathan Huberdeau and Evgenii Dadonov goals in a 4-3 see-saw win before earning another 4-3 win last month in Sunrise after entering for an injured Chris Driedger in the first period. The Panthers are healthy and desperate. Owning the tiebreaker with the Toronto Maple Leafs for the third-place Atlantic Division playoff spot – Florida’s 70 points are below that of the two wild card teams and current wild card runner-up – the Panthers had more solid playoff footing when the Kings passed through on January 16 but are just 4-6-1 in their lats 11, having allowed at least four goals five times over that span. A power play that was elite at that time, Florida is on a 0-for-19 skid over their last seven games. At five-on-five, their 9.36 Sh% ranks third in the league. This is an up-tempo, clearly-defined offensive-minded team.

— I’ll have tons much more from downtown on Gabe Vilardi, Tim Schaller and the mindset towards returning to work minus a handful of players whose impact was felt deeply both within and outside the dressing room walls.

Asked whether he has to manage emotion under these circumstances, McLellan responded with depth. “A lot,” he said before repeating himself. “A lot.”

“Not to the point where you’ve got to pull somebody aside and give them a great big hug, but you’ve got to know deep down what they’re thinking and how they feel. Marty didn’t show up at the rink the other day. He hadn’t been traded yet. If you don’t think that plays on their minds, it does. And we’ve still got three or four more days left. That bond that that group creates when you win championships – not one, but two – is so strong that when they walk out the door, it’s not easy and guys immediately think ‘am I next?’ The kids on the team that haven’t experienced one are ‘what’s going on, what’s going to happen?’

In answering that question, McLellan also sounded a call that he wants those seeking to strengthen their permanence in the league to absorb and apply. He referenced by name members of this current young wave who have a clearly defined opportunity in advance of a number of growing, high-end prospects’ arrivals.

“It’s all part of the transition,” he said. “The decision was made, the plan was plotted, the execution of the plan is beginning now. I think the next level of player – and that would be Amadio, Wagner, Lizotte, Moore, Prokhorkin – those are the guys now. You’ve got 22 games to figure where you fit in and what you can get done and accomplish here. And the prospects that everybody talks about, they’re still a little ways away. They’re percolating somewhere and hopefully improving, so we’re three or four stages into the rebuild, but right now that next level or layer of players really has to step up and perform and shine. I don’t want to call it a ‘tryout,’ but earn your spot. And that’s a great opportunity for him. I look at it that way, anyhow.”

— And, finally, Todd shared a direct assessment of the schedule, and no sir, he doesn’t like it. “It’s awful,” he said. “This schedule makes no sense to me.” He’s referring to a bizarre crossroads in which the Kings play 14 of 15 at home after having played 24 of 35 on the road, dating back to November 29.

“And obviously we’re probably not going to make the playoffs, so it’s not a coach complaining about that. This just makes no sense. We’re home for five, and then a nine-game home stand? It’s not healthy for any team to be like that. The amount of road games we’ve played and travel and lack of practice time and now how much we’re going to be at home, I don’t think it’s healthy for a team, I just don’t.”

Los Angeles has had only one home stand – any collection of two or more consecutive home games – since Thanksgiving. This schedule is highly irregular, but there are a lot of irregularities in the far-flung Western Conference. (See: Los Angeles’ one-off to Winnipeg earlier this week.)

“The one thing that the Oilers go through is rushing home to get back for Hockey Night In Canada, is what I found, especially with Connor being there,” McLellan said. “So, we could be in St. Louis, Nashville and fly home on Friday to play Saturday and then go back out to wherever. So, they’ve got it pretty tough, too, so we’ve traveled a lot. Anybody that’s played on the coast – Vancouver, San Jose, Anaheim – you travel. It’s not out of the ordinary, it’s just the type of scheduling. I get it. It’s tough when two basketball teams, a hockey team and awards nights and you name it are in one building. It’s tough. But this is a really interesting one. I haven’t experienced it like this in all my years, so we’ll see what we get out of it.”

— Tonight’s officials are referees Steve Kozari and Jake Brenk and the all-Vancouver linesmen connection of Ryan Gibbons and Kiel Murchison. (Murchison is a former Vancouver police officer.) Karli Webster will perform the national anthem. So much more to come from downtown, Insiders from Vilardi, Schaller, Anze Kopitar, Trevor Lewis and many more. Let’s talk soon. 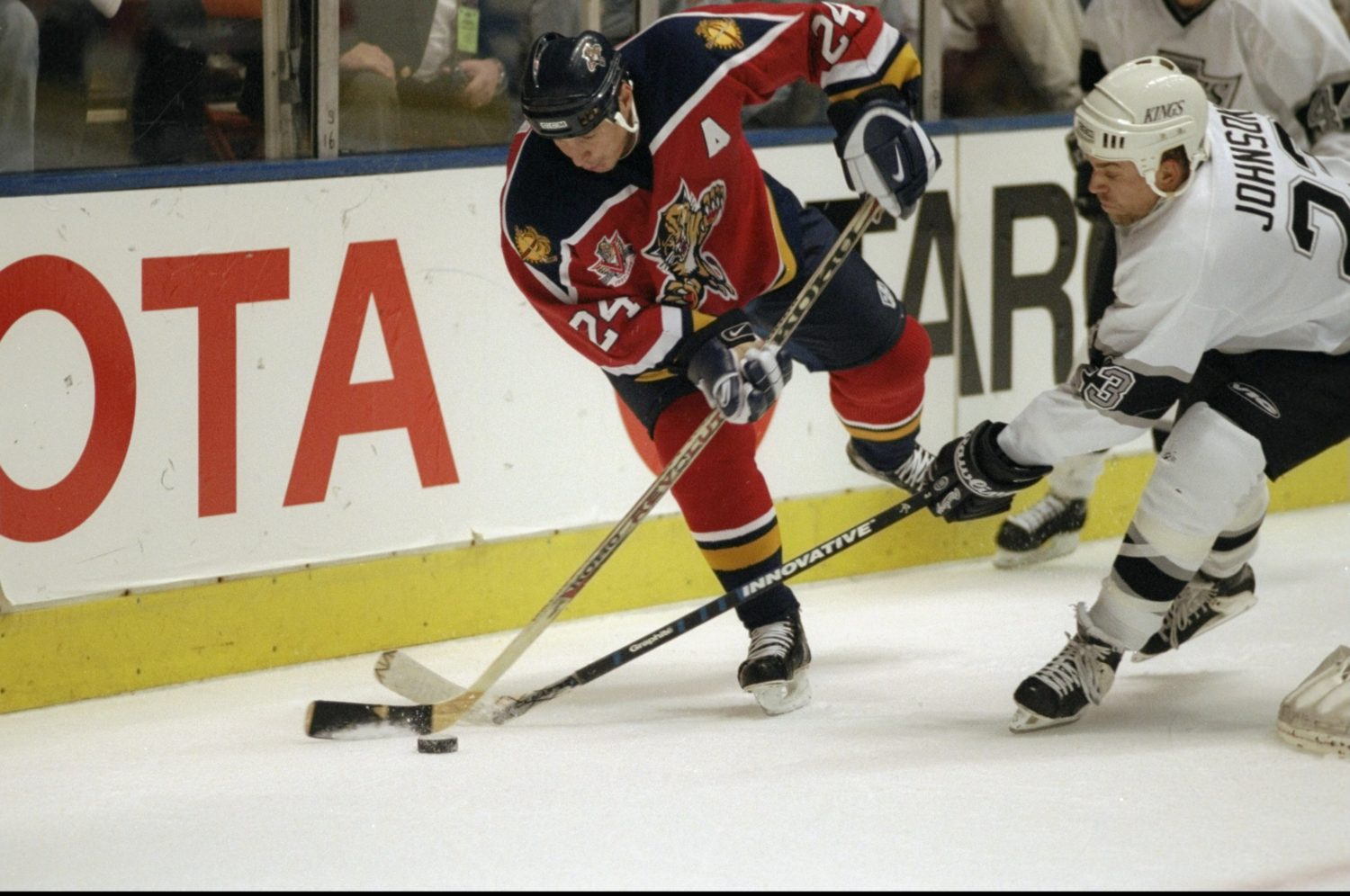 22 Jan 1998: Defenseman Robert Svehla of the Florida Panthers in action against leftwinger Craig Johnson of the Los Angeles Kings during a game at the Great Western Forum in Inglewood, California. The Kings defeated the Panthers 4-2. Mandatory Credit: Elsa/Allsport