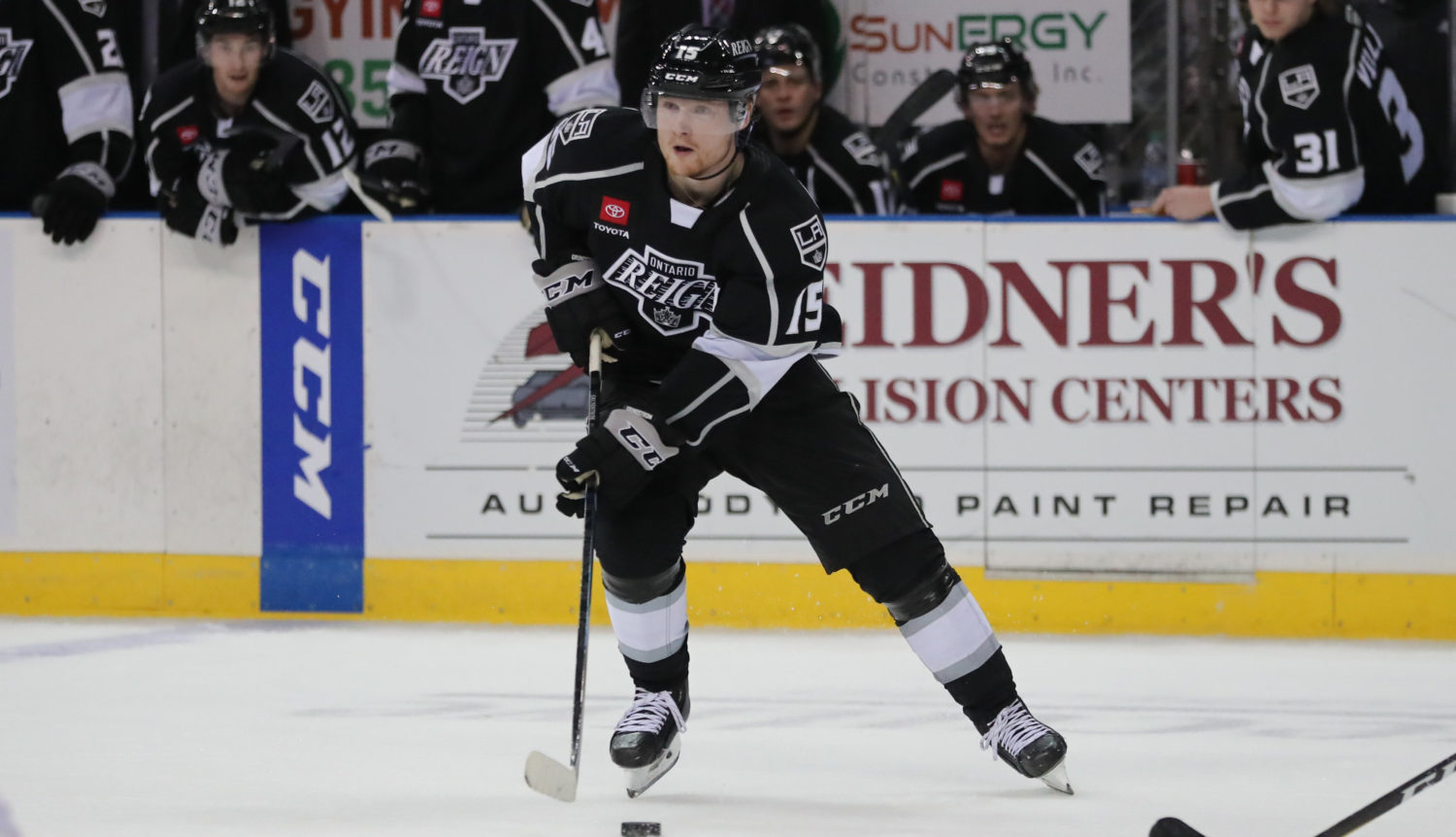 TONIGHT’S MATCHUP: The Ontario Reign conclude their week with a Sunday afternoon matinee against Colorado. Ontario is 2-0 thus far on the week, most recently including a 6-3 road victory over Stockton on Friday evening.

WHAT TO WATCH FOR: Just five players were on the ice this morning in El Segundo – Forward Jacob Doty, defensemen Daniel Brickley and Austin Strand, plus both goaltenders. Kevin Poulin was of first, indicating that he could make his Reign debut this afternoon against the Eagles. Those skating indicate that Johan Sodergran, Sean Durzi and Ryan Stanton could check back in for the Reign.

PLAYOFF PICTURE: The Pacific Division continues to tighten up as the Calder Cup Playoffs approach. The Reign the fourth and final playoff position by three points over the fifth-placed San Diego Gulls, while the Gulls lead Ontario slightly in points percentage, with three games in hand. The Reign, off of a 9-1-1 run over their last 11 games played, now sit five points out of third place in the division, chasing both Colorado and Stockton.

HEAD-TO-HEAD: Ontario and Colorado will meet each of the next two games at Toyota Arena, as Colorado visits the Inland Empire for the first time since October 11. The Eagles and Reign will meet five times in total down the stretch, including three games for Ontario on home ice. Entering today’s contest, the Reign hold a 1-1-1 record against the Eagles on the season, including a 0-0-1 record on home ice.

RIGHT AS BLAINE: Reign forward Blaine Byron tied a single-game career high with three points (2-1-3) on Friday against Stockton, as he scored two goals in a game for the first time with Ontario. Byron has four points (2-2-4) over his last two games, and seven points (3-4-7) over his last five games played. Since he joined the Reign in December, Byron has 16 points (5-11-16) from 21 games played, with a +6 rating.

CARL, GOOD TO SEE YOU: Ontario forward Carl Grundstrom collected a pair of assists on Friday, as he extended his AHL scoring streak to four games, dating back to January 31. Grundstrom, who has now posted two helpers four times this season, has seven points (2-5-7) over that four-game span. At 0.72 points-per-game this season, Grundstrom ranks second on the Reign’s active roster behind only winger Matt Luff.

MULTI-POINT MEN: Reign forwards Sheldon Rempal and Matt Luff each tallied a goal and an assist in Friday’s victory. Luff has multiple points in back-to-back games, and eight points (4-4-8) over his last six games played. Rempal also has two points in back-to-back contests, and has been on an offensive tear as of late. The second-year forward has nine points (3-6-9) over his last nine games played.

ROAD WARRIORS: Ontario’s victory on Friday was its 17th road win of the 2019-20 season. The Reign lead the Western Conference, and rank second in the AHL, in away victories, trailing only Belleville (20). On home ice, however, the Reign’s eight victories are tied for the fewest in the league. Ontario will look to string together back-to-back wins at home for the first time this season, and the first time in total since April 3 – 7 last season.

SCOUTING THE EAGLES: Since Christmas, the Eagles have been one of the AHL’s hottest teams, with a .711 winning percentage from 19 games played (13-5-1). Colorado forward Erik Condra has ranked amongst the best players in the AHL thus far during the month of February. The veteran has tallied nine points (4-5-9) from six February games, which is tied for the third most points leaguewide so far this month.