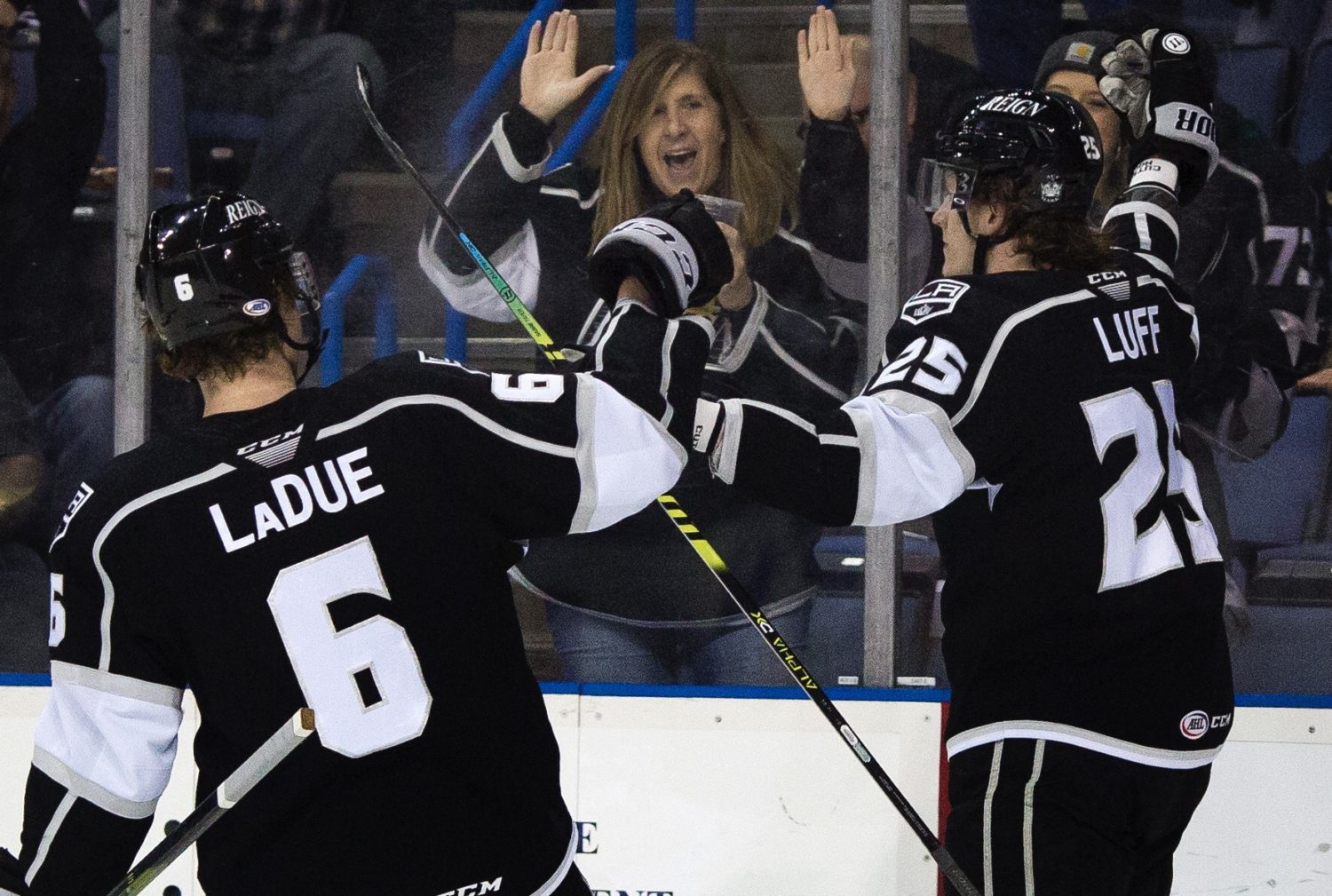 The Reign are rolling!

Ontario made it nine wins from their last ten games played, with points from 11 of their last 12, as they skated to their second straight 6-3 victory, this over the Colorado Eagles. For the first time this season, the Reign have two wins in a row on home ice, and Ontario made it a perfect 3-0 on the week with another divisional victory.

Forward Mikey Eyssimont was the story, with a career-high four points (1-3-4), while linemate Gabriel Vilardi added three assists in the victory and both players posted a +4 rating. Ontario got goals from six different players, with Carl Grundstrom extending his point streak to five games with a goal and an assist.

In net, goaltender Kevin Poulin made his Ontario Reign debut, with 31 saves on 34 shots, as he earned his first AHL victory of the season.

With the win, Ontario improved its lead on the San Diego Gulls to five points in the Pacific Division standings, and closed the gap on Stockton and Colorado to three points for second and third in the division. Ontario is back in action with a pair of games this coming week, beginning with a rematch against Colorado on Friday evening at Toyota Arena.

Mikey Anderson on getting back in the goal column tonight
Yeah, obviously it’s fun to score. When it happens, especially for a defenseman, it feels nice, but the way I play the game, it’s not something I go out looking for, so when it happens, it’s fun. Everyone like scoring goals.

On the strides he’s made in the d-zone this season
Especially as of late, I’ve been feeling really, really good about it. It’s always kind of been my forte, being a defender and then the offense kind of comes second to it. Recently, I’ve felt a lot more in control in the d-zone, me and Claguer have been working well together down there. We’ve had some success and we’ve got to keep that going.

On how he and the other rookies have built consistency throughout the season
Everyone talks about it, it’s a tough league. A lot of guys in here are still under 21, so we’re coming in here, playing against men and it can take a while to figure out where you need to be and how to play on a nightly basis. I feel like all of the young guys have been providing offense, our forwards, our defenders have been good and Matty’s been good in the net. Everyone’s kind of finding their stride right now.

On what he saw on his goal
Honestly, the puck kind of just popped out there. It was on edge a little bit, so I was just trying to make sure I bear down on it. I saw a little lane to the net and there wasn’t much traffic, so I just tried to put it upstairs. It got a little curve on it I think, where it was hard for him to track, and it ended up going in.

Mike Stothers on if he feels like he’s “got a team”
I’m starting to think yeah. I’m a little guarded and cautious to answer that, with the 24th looming right around the corner, who knows what’s going to happen then. The point I was trying to make earlier when we talked about it was you want to see the growth of your team and I think you’re now seeing a guy like Mikey Eyssimont tonight, gets himself four points and has a wail of a hockey game, how much he’s developed. The younger players, the first-year guys, from where they started to where they are now, the contributions they’re making and for us as a coaching staff, we’re not just one line. We’re now getting it from throughout the lineup. As far as the line that went out at forward the other night in Stockton, started things off with the forecheck and then Boko gets a goal driving to the net and that’s what we need. Right now, things are going pretty well, it’s good to see, but there’s a reason for it. The guys have bought in and they’re playing the way they could and because they’ve gotten experience, they’re a bit better.

On Mikey Eyssimont’s play as of late
Well, I said to him, you’re much more valuable to us on the ice than when you take a needless slashing penalty and you’re sitting in the penalty box. He’s got all kinds of skill, he’s got all kinds of ability. Sometimes, Mikey’s the hardest on himself – he expects perfection and that’s impossible to do. When it doesn’t work out, he’s very hard on himself and something things can do the other way. Right now, things are going well for him so we’re going to try and keep him in that positive space that he’s in. He’s got a lot of ability and a lot of talent.

On his forecheck that led to Grundstrom’s goal, and Eyssimont doing the right things on the ice, beyond just the points
Well, you’re probably excited about the pass, I’m more excited about the forecheck and how he used his body to separate the man from the puck and it allowed himself to make the next play. That’s a huge step for all of our guys, that’s what we’re looking for. It was a terrific play, and finished off, and that’s the type of things you look for as a coach, just to see how we’re playing. Right now, it’s good. I’m not going to get too excited, or too elated because I know how quickly things can change. This is what the game is all about, sometimes you’re on a good roll, sometimes you can’t buy a win. We’ll take it for today, and get ready for Friday coming up.

On handling expectations heading into the NHL trade deadline
One, I very rarely, maybe never, bring it up to them as a group, we don’t talk about the trade deadline, there’s no sense in doing it and it’s outside of everybody’s control. We’re expecting that things are going to happen, but who knows, so number one we don’t talk about it and number two it’s part of learning how to be a pro. Our guys have learned a lot of things along the way about taking care of themselves on and off the ice, the way they eat, the way they sleep, managing back-to-back games. Trades, the possibility of it happening and the possibility of guys getting recalled, injuries, how it affects things, line combinations, it’s all a part of the growing process. I think our guys have done a good job and I’m real proud of them right now.