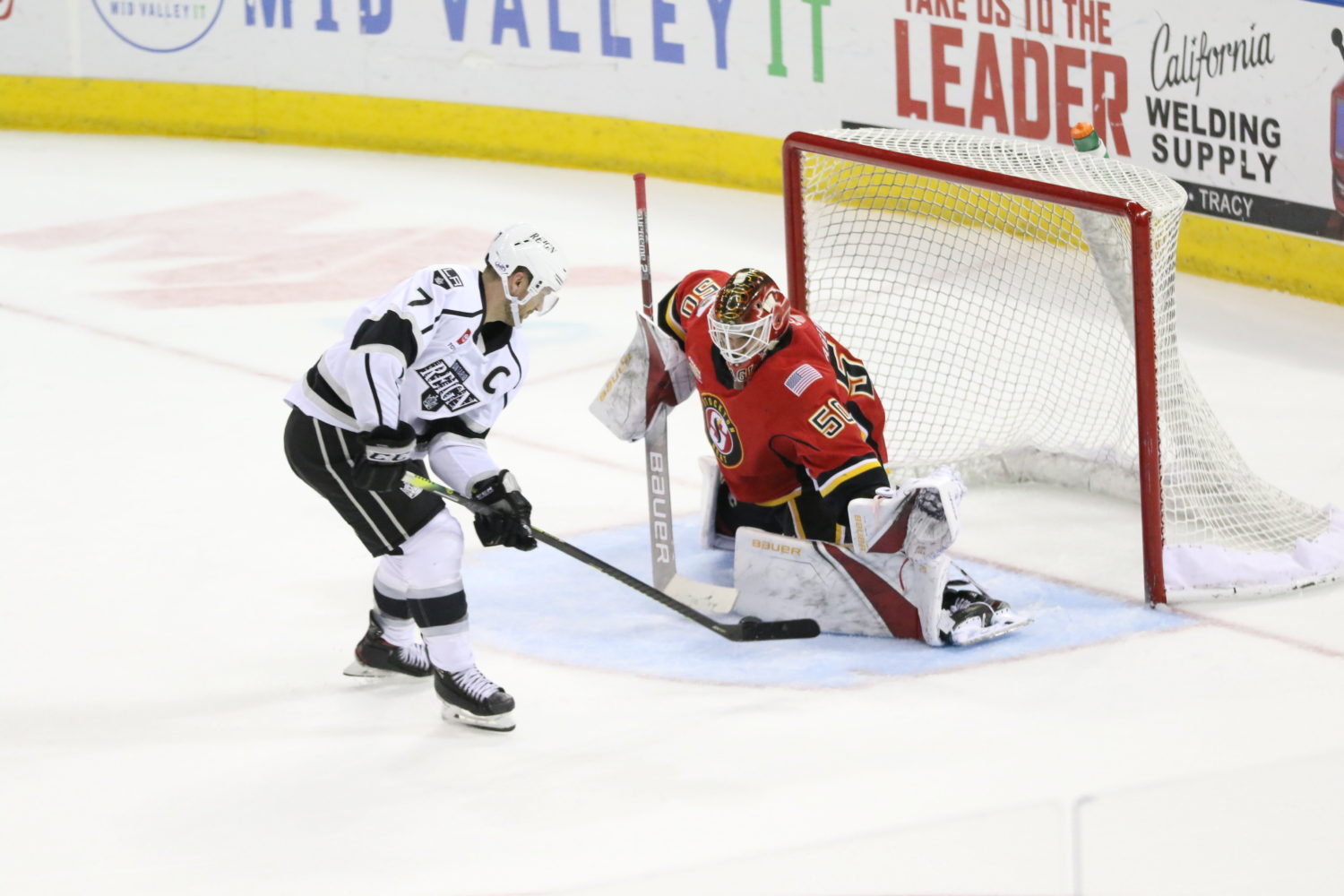 TONIGHT’S MATCHUP: The Ontario Reign hit the road for their second to last trip to Stockton this season. Ontario began the week on a high note, with a 4-2, comeback victory over Bakersfield on Wednesday evening.

BABY COME BACK: Ontario overturned a 2-1 deficit on Wednesday, winning for the eighth time this season when trailing after one period and fifth time this season when trailing after two periods. The Reign are tied for the league lead in comeback wins after 20 minutes, and tied for second in comeback wins after 40. Ontario is also tied for third in the AHL with 12 victories when conceding the game’s first goal.

ROSES ARE RED, VIOLETS LaDUE: Reign defenseman Paul LaDue scored a power-play goal in Wednesday’s victory, giving him nine points (3-6-9) over his last 10 games played. LaDue is one of three Ontario defensemen with at least seven goals scored this season, joining Kale Clague and Austin Strand, making Ontario one of two teams in the AHL, along with Charlotte, with three defensemen with at least seven goals scored.

BE MY VIL-ENTINE: Ontario forward Gabriel Vilardi extended his scoring streak to five games, as he picked up a power-play goal in the third period on Wednesday. Vilardi has eight points (4-4-8), and a +7 rating, over that five-game stretch and is now tied for third on the Reign with nine goals scored this season. With 22 points (9-13-22) from 30 games played, Vilardi ranks second on the active Reign roster at 0.73 points-per-game.

NETFLIX & VILL?: Reign netminder Matthew Villalta made 25 saves on 27 shots in Wednesday’s victory, as he went the final 48:40 without allowing a goal. With the win, Villalta improved to 4-1-0 over his last five starts, and 7-2-1 over his last 10. On the season, Villalta is 7-4-1, with just three of his regulation losses coming from games he’s started, and has posted a .912 save percentage and a 2.86 goals against average in games in which he’s gotten the start.

VALENTINE, I THINK YOU’RE A STAR: In a 4-3 Kings victory on Wednesday, all three stars were Ontario Reign alums, with Kurtis MacDermid (1), Cal Petersen (2) and Matt Roy (3) all honored. MacDermid collected a Gordie Howe Hat Trick, his first as a professional in the victory, and posted a +3 rating, a career best. Petersen won his first NHL game of the season with Los Angeles, while Roy posted a career-best +4 rating.

SCOUTING THE HEA(R)T: Stockton forwards Austin Czarnik and Byron Froese have led the Heat as of late, with each player tallying eight points (4-4-8) over his last four games played. Czarnik collected a hat trick in his most recent home game on February 1 versus Bakersfield, while Froese has multiple points in each of his last three games, as well as in five of his past six. Both players are currently one point shy of the AHL lead in scoring so far this month.