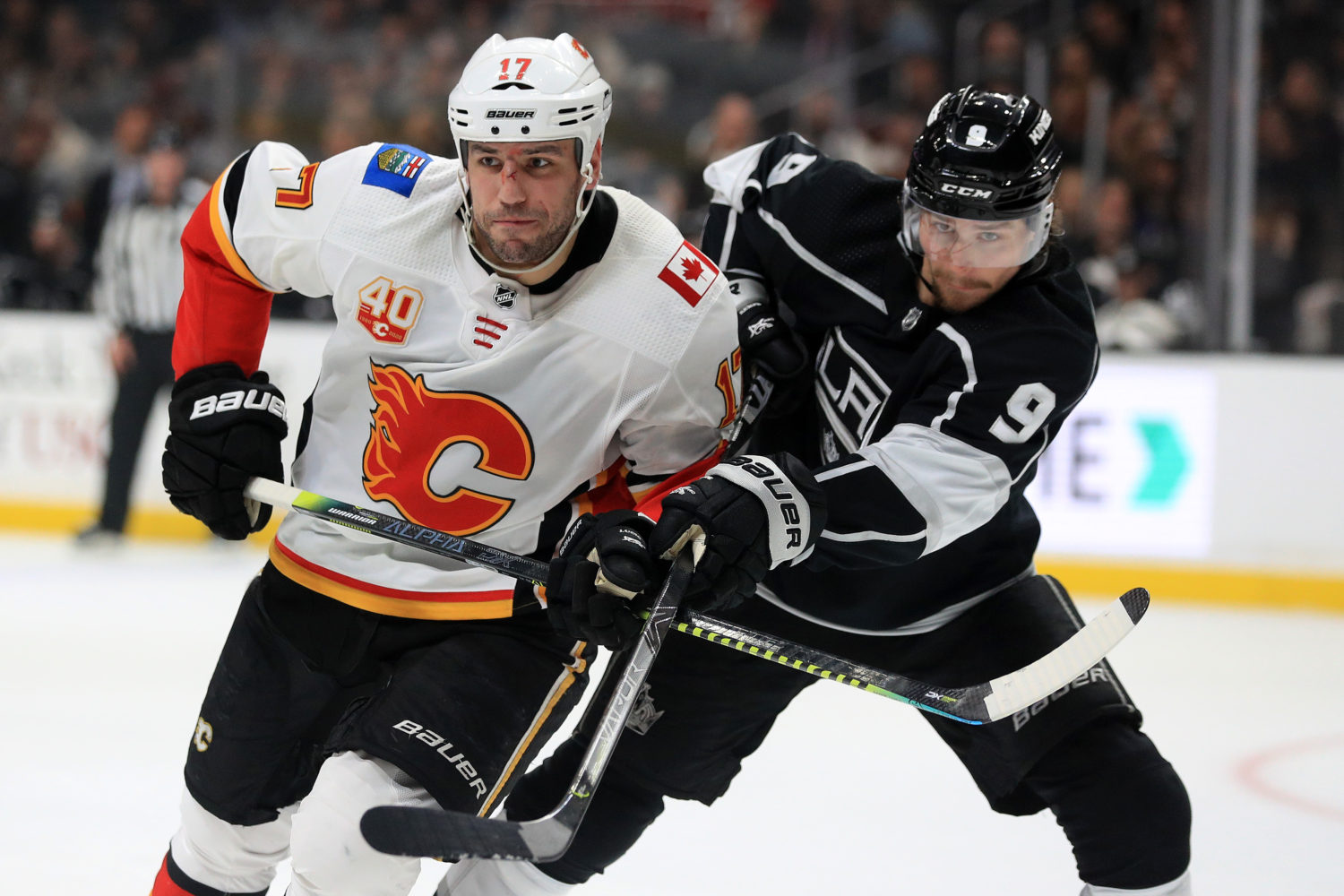 Todd McLellan, on whether he was satisfied with the Kings’ performance in the 5-3 win:
Well, obviously satisfied with four goals and an empty-netter. It’s been a long time since we were the ones celebrating after a puck rolled in an empty net. We made some good plays around the net. Even right off the bat, the very first chance we had a nice drive wide and a touch in the paint. I thought we were a little more creative. We knew their back end was banged up a little bit. We wanted to get after their D as much as we could. I think we took advantage of that at times. Throughout the lineup everybody found a way – every line almost found a way – to get on the scoresheet, so when you can do that and put four up you have a really good chance of winning in this league.

McLellan, on Austin Wagner scoring on a breakaway:
Just leave him alone. Don’t ask him any questions. Just leave him alone. No, we’re happy for him. He stuck with it. He didn’t lose his spirit at all. There were times where he was asking a lot of questions through a lot of people – whether it was us as coaches, I’m sure there were people at home trying to help him, teammates. Sometimes you’ve just got to block it all out and go play, and he made a nice play on the breakaway tonight. He’s had many of them. Maybe this is the beginning of something good down the stretch for him.

McLellan, on the team’s persistence:
Strong. Not unexpected, though. We’ve had that in our game. We’ve been on the road so much lately and the reward hasn’t been there for some really good efforts, some average ones, and you usually don’t get rewarded for that. Coming home here and to stick with it, it’s always a competitive game against that team. A lot of emotion and it was a good thing for us tonight.

McLellan, on Matt Roy’s “low-key” effectiveness:
I think you almost answered your question. Steady Eddie, positionally sound, good stick, outlet passes, physical. Not necessarily the big hits, but getting your body in position between loose pucks and the offensive player. Penalty kill was big, so he does that night in and night out. It’s very easy to talk about him and his play. Nothing flashy, but so, so valuable to our team.

McLellan, on Cal Petersen:
I thought he was really good, really solid. Has a calmness to him – a really relaxed, I don’t know, like I’m holding by breath sometimes. “Like, are you ready?’ and he just calmly makes the save, and I think that’s a really good thing. We’ll work on his puck play in and around the net. Obviously, the game’s a little bit quicker here than it is in the American league, so you’ve got to get it off your tape and make decisions quicker, but I thought he was a big part of our win tonight. Even down the stretch, there were some scrambles – 6-on-5, 5-on-3, there was no panic in his game, there wasn’t any flopping around, it was just calm, and then the third goal, there was some bad luck in it, too. A really good night. Need good goaltending to win games and he gave us that tonight.

McLellan, on Petersen’s “mental game” after bobbling a puck that led to a goal-against:
Yeah, and this may sound really strange, but that almost triggered us, too. We didn’t start the second period really well. They scored and then we got going. I think perhaps because he was in there, and part of the mistake – not the complete mistake, but part of the mistake – the guys dug in and played for him for a few minutes and found a way to come back. That’s a good sign when they can do that for him, a nd he in turn makes some pretty big games down the stretch.

McLellan, on whether the Calgary rivalry is influenced solely by Drew Doughty and Matthew Tkachuk:
No, I wouldn’t say that. They’re a pretty good team. That’s a big part of it, but there’s competitive guys in there. Maybe the two toughest guys in the National Hockey League are playing on each team. There seems to be a scrap every [inaudible] between them. Emotional players on both teams. The Tkachuk-Doughty rivalry, yes, it has something to do with it, but the teams play each other pretty hard. It’s fun hockey.

McLellan, on what he’ll want to accomplish in his outdoor practice:
It’ll very much be that. If you’re coming to watch us practice and think we’re going to work on a system or anything like that, it’ll be an opportunity for us to get used to life at 7,000 feet and our environment, our surroundings. Tomorrow, the quick practice we have before we leave will get us somewhat prepared for a real, real good team in Colorado.

McLellan, on whether he’s picked out his wardrobe for the outdoor game:
No, it’s going to be warm, I can tell you that.

McLellan, on whether he’s chosen a goalie for the outdoor game:
No, we’ll probably talk about it here, but good chance it’ll be Quickie. He’s earned the opportunity through all his years that he’ll get that opportunity to play.

Geoff Ward, on the differences between the teams in Los Angeles’ win:
Well, it’s probably puck management at critical times in the game. I thought we created some good chances. Didn’t cash [in], but we had some good ones. I thought at the end of the day, I thought some of the turnovers and things in the neutral zone came back to haunt us. At this time of year we need to make sure there’s nothing. We’ve got to get the puck in behind and keep going.

Milan Lucic, on the loss:
We played well, and I think if you look at all four goals, it was our own doing as far as turning the puck over and they were able to pounce on it to get a goal. Other than that we played a pretty good game. We created a lot of chances. Power-play was so good for us in the last two games, we weren’t able to get us one here tonight. And I think if you look at it, it was the difference here tonight.