It’s a touch late out here, so I’ll jump in to more of the trade analysis from Brooklyn on Thursday

First, Trevor Moore stuff. The Kings are getting a feisty, well-built forward with good legs who was skating alongside fellow Denver Pioneer Nick Shore when we’d breezed through town in November. Moore is a Thousand Oaks native who played for the LA Selects and out of rinks in Simi Valley and Lakewood but spends most of his off-season in Denver. He’s part of the emerging California pool and when we chatted earlier this season spoke of his appreciation for Luc Robitaille when he was a kid and then for Anze Kopitar and Drew Doughty as the Kings won their second championship following his freshman collegiate season.

He missed separate swaths of time with a shoulder injury and a concussion, and though he got off to a hot start before his injuries, enters the rotation having been held without a point in 19 straight games. He appeared in 9:32 in Toronto’s 5-3 loss at Madison Square Garden Wednesday night, registering two shots on goal.

Moore, an undrafted free agent who won NCAA and Calder Cup championships, shouldn’t be expected to develop into a scoring demon, but more of a puck hound who skates well, backchecks, is well-built and scored a playoff goal last year by finding ice between Brandon Carlo and Torey Krug and showing good tenacity around the net.

A number of articles you’ll find on him were written in the aftermath of the Woolsey Fire and Borderline Bar and Grill mass shooting that deeply affected so many and particularly those on the Los Angeles/Ventura County border. Before he debuted in the NHL, the Maple Leafs recalled Moore while making their California swing in the aftermath of those events.

Via Bruce Arthur of the Toronto Star:

The fires didn’t reach Trevor Moore’s family’s house in Thousand Oaks, Calif. A fire broke out nearby on Monday, the day he visited his parents, the day before he was recalled but didn’t play for the Toronto Maple Leafs, but the fire was beaten back. Good day.

“I mean, we were pretty lucky. Where we are, there could be a lot of fires around there with the layout, but they’ve been safe,” said Moore, a 23-year-old undrafted college free agent who led the Toronto Marlies with nine goals and 12 points this season before flying to L.A. to take an extra-long morning skate and sit in the press box. “I’m glad I was able to get back here and see my family. It just makes you realize how important that is. It’s a hard few days for sure around here, and I just hope everyone’s OK.”

On the ice, Denver Post Avs and college hockey reporter Mike Chambers profiled a Moore as a freshman and received feedback from former Pioneers and Dallas Stars coach Jim Montgomery:

Moore followed Bennett as an L.A. Selects (triple-A) standout and spent his last two years of high school in Kearney, Neb., playing for the Tri-City Storm of the United States Hockey League (junior-A). He became the best player on two bad teams.

“I don’t think he has been in a real winning environment, and I don’t think he’s ever been listed as a true hockey player, and that’s what so exciting about his potential,” Montgomery said of Moore. “He has an extremely creative and dynamic mind — creating being his vision, finding teammates all over the ice, and dynamic how many times he beats people in the corner and off the rush. He’s not a guy who just beat you with speed, but going east and west too.”

As for other bits, he’d been challenged in the preseason by Mike Babcock after a slow start and responded well and as of today sports a -4.1 CF%Rel and a 48.0% GF% despite starts that skew clearly to the offensive part of the ice. He’s signed through next year at a desirable $775,000, and it’s important to fit those inexpensive players where they may earn roles.

It’s also important to note that he’s the lone 1995-born forward on the club. I’ve shared this a few times before, but after 1987-born Anze Kopitar, the next-youngest forward on the team is 1992-born Tyler Toffoli, and he’s likely to be traded. There’s a lapse amidst that next pool, those in their mid-20’s, with a major gap between 1993-born Alex Iafallo and Nikolai Prokhorkin, and 1996-born Michael Amadio and Adrian Kempe. No forwards existed there prior to the arrival of the 1995-born Moore, an emblem of the team’s win-now mentality and asset philosophy around the time those players were draft eligible.

It goes without saying, but the Kings lost two really good men. The loss of Clifford, particularly, is going to affect them Thursday. It’s hard to think of a Kings room without him. It’s hard to think of a Kings way of life without him. Here’s to his sacrifices and the enjoyment his dedication brought so many. With his departure, their contingent of dual Cup-winners has been reduced to six players in Jonathan Quick, Drew Doughty, Anze Kopitar, Trevor Lewis, Dustin Brown, Alec Martinez and Jeff Carter.

The Kings and Leafs meet on March 5 at Staples Center. More to come from Barclays Center and beyond.

A transcript of my chat with Moore from November is below. It was mostly about L.A.-area hockey, with some Muzz sprinkled in.

Moore, on whether he skates at TSPC while training in the off-season:
I’m more of the Thousand Oaks, Simi Valley area, so I don’t get out that way too much, and then I spend a lot of my summer in Denver, which is where I went to school. They’ve got a lot of good players out there that come back in the summer. But I talked to some of my buddies back there in California, and we get out there and skate every once in a while.

Moore, on Jake Muzzin:
His personality is electric. He’s a super good leader, like you’re saying, and then also he keeps it light, which has been great. A good mix for us, and a guy we need.

Moore, on how he spends his time in L.A.:
I do a lot in California, Dodger games all that kind of stuff. But mostly just hanging out with my family – just going to the beach a bit and stuff like that, so really just spending time at home. 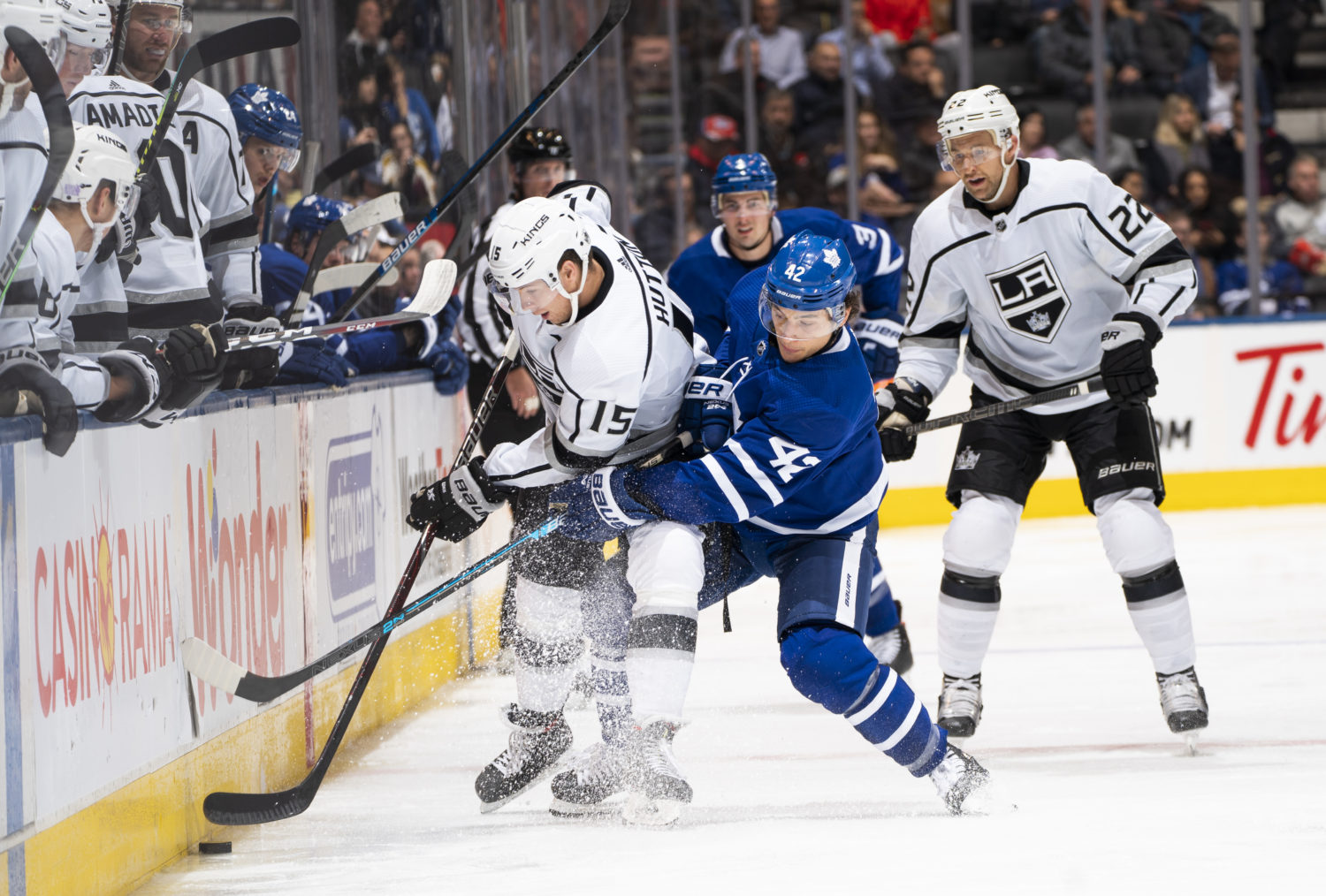