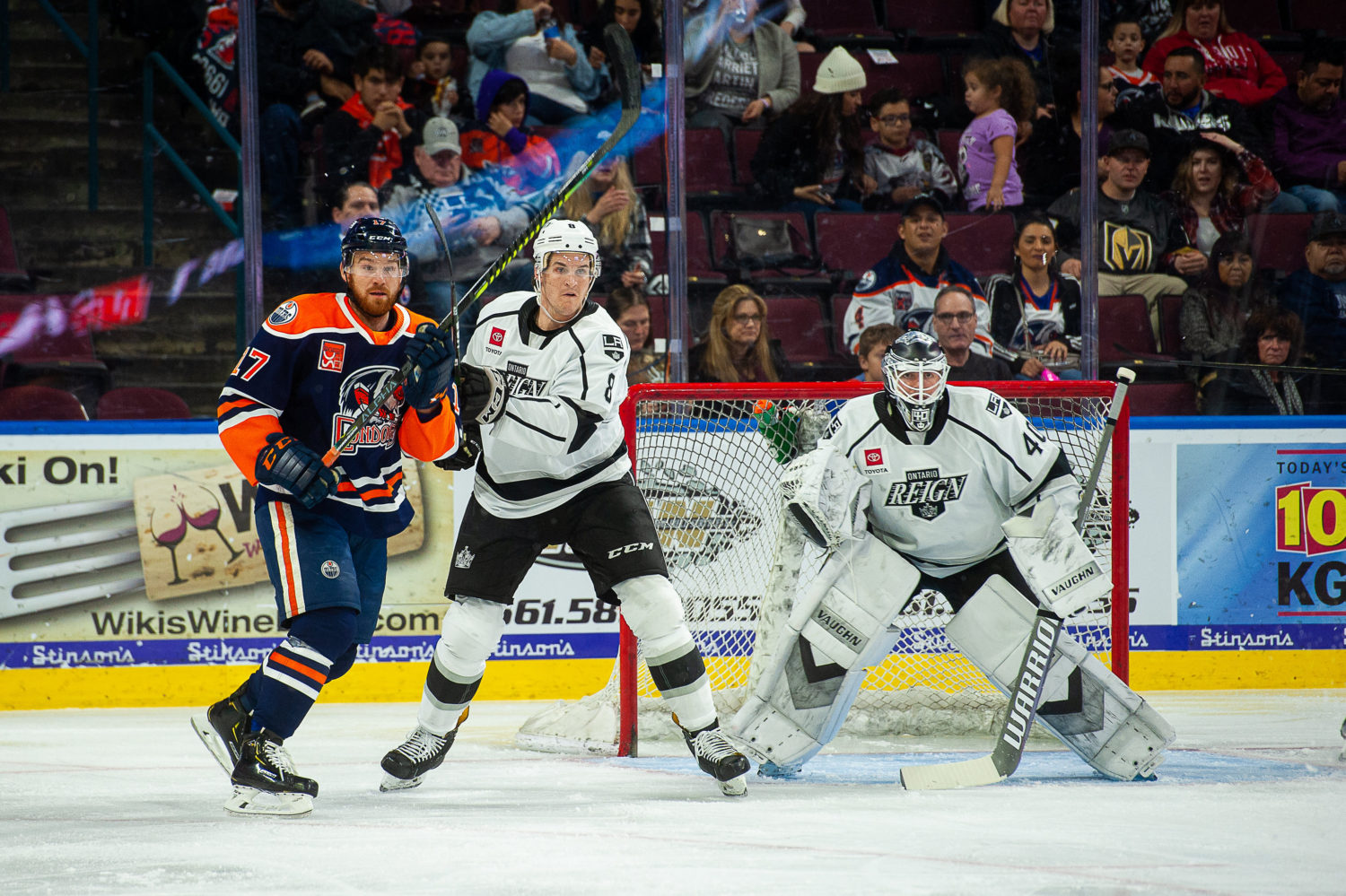 The Ontario Reign skated to perhaps their biggest victory of the season to date, a 4-3 triumph over the Bakersfield Condors on Friday evening at Mechanics Bank Arena. Almost as importantly as the two points that Ontario gained are the zero points that were surrendered to the Condors, who entered tonight’s action just two points behind the Reign in the Pacific Division standings ad depart it twice that.

It wasn’t always pretty – the Reign gave up two goals in the third period, as a 4-1 lead shrank to 4-3. Ontario had a plethora of chances to throw the knockout punch, and several close calls down the stretch, as it relied a bit too heavily on Cal Petersen in hanging on for the victory, but hang on it did.

At the end of the day, Ontario did enough in a very well-played first period, and an opportunistic second period, to hold off the Condors and make it six straight games with a point, at 5-0-1 in that span.

The Reign have an equally important game, with a short turnaround, tomorrow afternoon in San Diego, with a 4 PM showdown against the San Diego Gulls, who lead the Ontario by percentage points in the Pacific Division standings.

Paul LaDue on his pairing with Tobias Bjornfot
I think we’ve got really good chemistry out there, kind of both the same style. We both like to move our feet and we’re pretty defensive. He’s a special player, it’s his first year in the league but he looks like he belongs. I’m happy to play with him and we have to keep improving and keep being consistent.

On if he can take as much pride in shutting down oppositions top players as producing points
For sure, that’s something we definitely take pride in. There are a lot of good teams in this league, but I feel like we’re doing pretty well and I feel like that’s definitely something we can take pride in. We gave up a few goals tonight, but we’ll come back tomorrow and be even better.

On if the Reign are starting to find their stride here, with points in six straight
Yeah for sure, we’ve been playing well. I thought tonight, we took a little step back, we had a good first period and we kind of got a little bit slow in the second and we let up a bit in the third, but we’ll learn from that. It’s getting down to the playoff run here, the playoff push, so every game counts and tomorrow is a big game.

On the team’s play in the second specifically and capitalizing on chances
I mean, we capitalized on our chances, with a couple of good shots there, that’s what a good team does. I think we relied a little bit too much on Cal in the third and he came up huge for us, like he always does, but we need to do a better job of helping him.

Mike Stothers on finding a way to win tonight, even if it’s not the easy way or the pretty way
Yeah, but we brought all that on ourselves, Dools. We had eight power plays, and we scored one power-play goal, but we had ample opportunities, a 4-on-3 in the second period and consecutive power plays in the second and we didn’t get that dagger that we needed to put the game away. The way the game goes, if you don’t score on your power plays, the other team’s going to get their chances. Sure enough, in the third period, it happens, we get a couple of tripping calls against us and now it’s an interesting game. Through it all, we did find a way to win. We did not give up a point to Bakersfield, because we don’t want to do that, obviously we want to keep trying to get as many points as possible in these head-to-head matchups. It was a good win, we’re happy with it, we’ll leave here with at least knowing there’s better play capable and we need to play better if we want to find a consistency we’re happy with.

On the team’s first period, and response to the early goal against
You know what, I mean we gave up a goal what, 23 seconds into the game and the great thing was the demeanor didn’t change on the bench. Maybe earlier on in the season, the shoulders slump and the heads down a little bit, but it didn’t even phase them, it was like ‘we’ve got plenty of time’, which we did. I thought we played real fine in the first period, I thought we were the team that was dictating, we were the team that was playing on their toes and they were the team that was chasing from behind, which is unusual in this rink. That’s a good team, and they play extremely well here. I just think that we need to clean up the opportunities to put a team away and when you get that many opportunities on your special teams, we’ve got to bear down and make it happen.

On Sheldon Rempal’s play over the past three weeks, and increased production
Remps, he’s been doing everything you wanted, he just hasn’t found the back of the net. A guy that can shoot a puck like he can, he’s been known in the past as a guy that is a goalscorer and it’s only a matter of time. The problem is that it just seemed to go on excruciatingly long for him and everybody else, because his teammates were supportive of him. Every time he touched the puck in the offensive zone, the guys on the bench were like ‘cmon Shelly, cmon Shelly, this is the one’. They were excited for him because it’s important. Those guys that score, it means the world to them and when they don’t, boy do they get frustrated and they’ve got the weight of the world on their shoulders. It becomes arduous for them to even get on the ice, so good on him. He’s played well, he made some things happen, he’s a good, quick hockey player and hopefully he can keep it going.