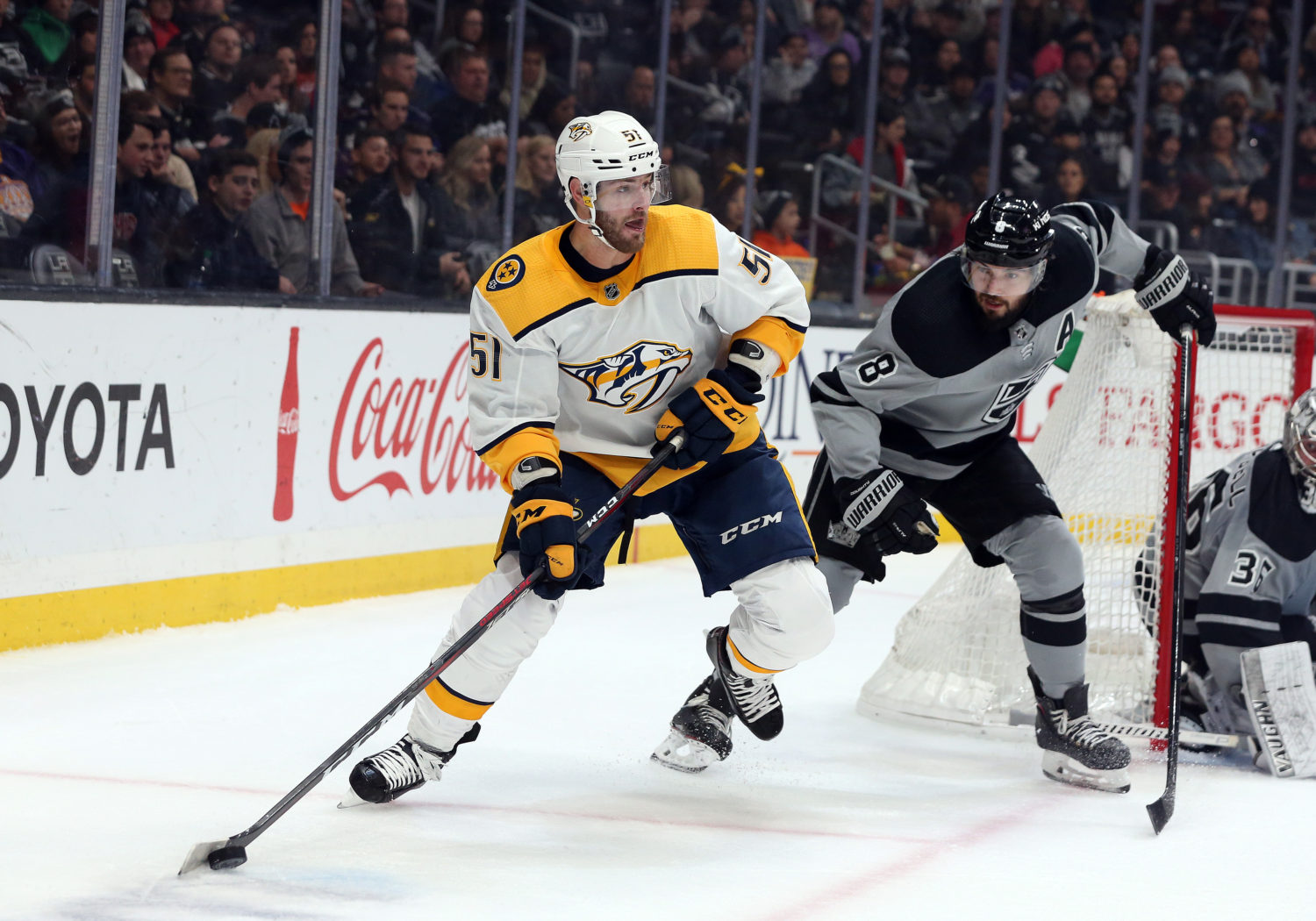 Todd McLellan on his evaluation of tonight’s game
Disappointed. Quite disappointed in the group, haven’t said that very often with our team, but I just thought one team was so much more intense and hard and committed to doing it over and over again and another team was going to try and win it the easy way and we haven’t done that often. Perhaps this was good for our team, a little piece of humble pie won’t hurt us right now, it gives us an indication that we’ve still got a lot of work to do. I’m disappointed in some individuals that had a chance to really…they’ve worked hard and they’ve crawled up into the lineup and they’ve been real competitive over the last little bit and they gave some of it back tonight. That happens, sometimes that’s experience, sometimes it’s just getting comfortable, but they’ll need to be reminded that they’re important and we need everybody. It’s hard to win in this league with 10 players, whether it’s the top ten or the bottom ten, it doesn’t work.

On allowing three goals off of defensive zone faceoffs
Four – I include the last one because we won the draw and we didn’t do anything with it, so four goals off faceoffs. [Reporter: You previously talked about that as something you wanted to work on in practice, will that be back on the menu this week?] Well naturally yes. There’s so many pieces that go into a faceoff. Right off the bat in the circle, the two centers, and to me that’s an indication of where your team is at. Are they really battling for ice in that circle, are you winning the 50/50’s, are your D helping out, what do you do with a win, and you can watch our team. When we’re playing well, we usually execute pretty well. We make some mistakes, but tonight I thought they were just harder and more intense than we were. They went to the dirty areas to really dig in and score. Were we in the shooting lanes on the way out I don’t know, were we beaten back to our net, yes we were. Just outworked, so like I said, it can be humbling and it’s not fun to get humbled, but maybe we need it.

On a lack of pushback in the third, as opposed to recent games, especially after Nashville scored its third goal
Tonight felt a lot different than it did some of those other nights. Their foot was on our throat and they were stepping hard. When you’re not committed, or really working the way you can, you feel like you don’t have a chance. Those other games we had a chance because we were working and we were there, so the whole environment was different tonight, especially after 3-1. Disappointed we put ourselves in that situation.

On how he felt the Kings handled the activation by Nashville’s defensemen
Well, their D jumped up and we knew that coming in, that they would be very, very aggressive, even less Ellis and Fabbro, who are two dynamic defensemen. Josi’s still going all the time, Ekholm those type of guys jump in and they hurt us in a lot of different areas. They hurt us off faceoffs, they hurt us off delays coming into the zone, they hurt us off motion up top. It wasn’t that we didn’t talk about it, or address it or prepare for it, we just didn’t execute it, so I guess the answer to that is not very happy with the way we handled it.

On Alec Martinez’s return to the lineup
First game back, he made some really good plays and competed hard, yet when you come back from an injury, you need people around you to pull you a little bit. We can’t rely on him to do the pulling, and he didn’t get a lot of help there tonight, so I think it’s a hard assessment. If our team would’ve played the way it had played the last ten games, I think I’d give you a better assessment of Marty, but I know he worked hard. He had pretty good lungs and good legs tonight. The timing’s going to take a little while, but he’s a veteran, he’ll come back quick.

Alec Martinez on his return from injury tonight
It’s no different than any other injury, you know, you don’t want to be out, you want to be out there with your team, helping the team turn this all around and you want to be a part of things. Unfortunately, it’s a part of the game, but we have great medical staff, great doctors that took care of me. The development staff and trainers, that helped me get back in shape and get ready to play, kudos to them.

On having a chance to watch the growth of the team during the month of December
I think just getting comfortable with our system. Obviously this was new for all of us as a group, and I’d say that, consistently from day one of training camp, we’ve consistently gotten better and better. Obviously we’ve had some ups and downs, as any team does throughout the year, but I think just taking the next step and feeling more comfortable in the system and establishing that and establishing our identity as a team.

On what Nashville did well tonight, which made it difficult on the Kings
I think they’ve got an active D, Josi in particular was up in the play a lot, making plays. Obviously they killed us on, I think, three faceoff goals, so we’ve got to sharpen up our coverage on that.

On what the issue was on the faceoff goals conceded
Everyone knows their assignments, I don’t remember specifically, but those are obviously breakdowns and those are things that we practice and we can’t afford to do that and expect to win.

On his expectations for himself in his first game back
I felt better as the game went on. I think, coming back, you try to keep things simple and I felt pretty good. Like I said before, our development staff and our strength staff and our trainers, they put a lot of effort in planning and establishing a plan to return to play. I was out there a lot skating, I think I’ve been skating for about three weeks, as soon as I could, so they did a really good job that way to get me ready.

On why the Kings couldn’t generate their usual shot volume tonight
I think that they’re a high-volume shooting team, we knew that going in, that was part of the pre-scout. I think we probably let Rinne handle a little bit too many of our dumps back there he’s really good at playing the puck and can kind of serve as another defensemen there. That said, Soupy did a hell of a job today, he made a lot of really nice plays. I think that against a team like that, you’ve got to keep the puck away from the goalie if you want to establish the forecheck.

Postgame Notes
— With the loss, Los Angeles fell to 35-30-9 all-time against Nashville, a record that includes a home mark of 18-16-4. The two teams will meet once more this season, on March 6 in Nashville.
— With the loss, Los Angeles fell to 11-16-1 against the Western Conference, 5-5-0 against the Central Division, 4-10-0 in three-goal games, 3-17-1 when allowing the first goal, 0-16-1 when trailing after one period, 1-20-1 when trailing after two periods and 5-4-2 when outshot by their opponent.
— The Kings scored a power-play goal tonight, making it back-to-back games with a goal on the man advantage. The Kings have now scored a PPG in consecutive games three times this season (10/5 – 10/8, 11/21 – 11/23).
— Defenseman Alec Martinez returned to the Kings lineup for the first time since November 25. Martinez played 17:58 on 21 shifts.
— Forward Alex Iafallo extended his scoring streak to six games with the Kings’ lone goal. Iafallo has seven points (2-5-7) in total over that streak.
— Forward Tyler Toffoli extended his scoring streak to three games with the lone assist on Iafallo’s goal. Toffoli has three points (2-1-3) over that streak.
— Los Angeles attempted 53 shots (24 on goal, 10 blocked, 19 missed). Nashville attempted 65 shots (38 on goal, 14 blocked, 13 missed). Forward Mikael Granlund led all skaters with six shots on goal, while Granlund, forward Calle Jarnkrok and defensemen Drew Doughty led all skaters with seven shots attempted.
— The Kings won 33-of-71 faceoffs (46%). Michael Amadio won 6-of-12, Anze Kopitar won 7-of-19, Blake Lizotte won 10-of-17, Jeff Carter won 6-of-13, Nikolai Prokhorkin won 2-of-5, Adrian Kempe won 1-of-2, Kyle Clifford won 1-of-1, Alex Iafallo won 0-of-1 and Matt Luff won 0-of-1.

The Kings are scheduled to have an off day tomorrow on Sunday. The team is slated to return to the ice at Toyota Sports Performance Center for morning skate on Monday, prior to hosting the Columbus Blue Jackets on Monday evening at STAPLES Center.