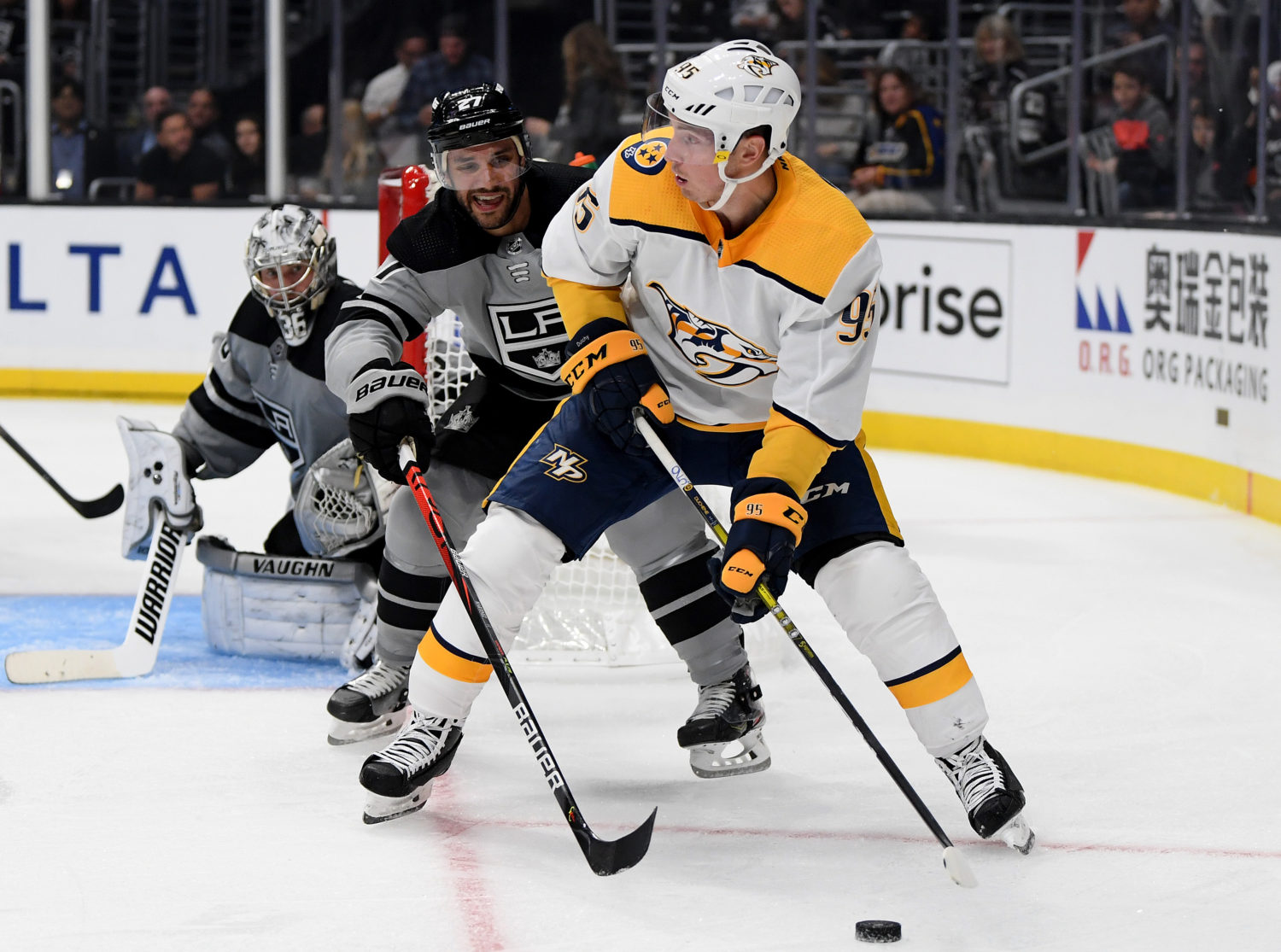 KINGS VITALS: The Kings hit the ice this morning in El Segundo in advance of their first game in three (!!) days. Goaltender Jack Campbell was the first netminder off this morning and is the presumed starter this evening. Campbell will be making his first home start since November 30 (per Alex Faust) and his second career start against the Nashville Predators. Campbell is 1-0-0 against Nashville, with 28 saves on 32 shots in a 7-4 win over the Predators in the home opener.

Forwards Tyler Toffoli and Jeff Carter were absent from this morning’s skate, but no indication that either won’t play tonight. Forwards Dustin Brown and Trevor Lewis, along with defenseman Kurtis MacDermid were on late after morning skate today, which indicates that defenseman Alec Martinez will return to the Kings lineup this evening.

“Alec will be ready to play tonight, unless something dramatically goes wrong this morning,” Todd McLellan said this morning. “He should be ready.”

Per McLellan, Martinez won’t have any specific restrictions on his game tonight. How much or how little he winds up playing in his return to the lineup will be determined, mainly, by Trent Yawney, who runs the defense, and how Martinez himself is feeling.

“Yawns runs that backend, and he’ll get an indication of what his legs and lungs are like, but Marty’s a pretty experienced player. He’ll know his body better than anybody, so he’ll have to have real good game management. We’ll look at the number of players coming back into our lineup, Brown, Lewis and hopefully Forbort at some point, so there will be a number of players that will have to make in-shift decisions on how much or how little.”

Martinez’s return to the lineup this evening would mark his first game action since November 25. Since that date, MacDermid had skated in 15 of 18 games for the Kings and will now miss two consecutive due to his suspension.
McLellan said this morning that he supports league initiatives towards player safety and that the team accepts the suspension.

Without a full complement of forwards available, it won’t be known until game time what the lines are looking like, but indications are that the forward groupings will be unchanged. The defense will likely consist of Martinez, along with Doughty, Roy, Hutton, Walker and Clague, in some form or combination.

In addition to officially activating Martinez from IR, the Kings have recalled defenseman Derek Forbort from his conditioning loan with the Ontario Reign, and have placed defenseman Joakim Ryan on IR, effective to December 27.

PREDATORS VITALS: For the Predators, the team will not skate in full this morning. The team has not yet announced a starting goaltender for tonight’s game, but per Thomas Willis, here’s how the Predators are expected to line up this evening at STAPLES Center –

The Predators will be without one of their best tonight in defenseman Ryan Ellis, who was placed on injured reserve with an upper-body injury sustained in the Winter Classic. Corey Perry, who laid the hit, was suspended five games yesterday for the play, but that doesn’t do a ton to help Nashville, which loses fifty percent of its top defensive pairing. Take a look at a deeper read on the impact Ellis has had on the Predators this season per The Athletic’s Adam Vingan, which shows that Ellis has been amongst not only the team leaders but the league leaders in several advanced statistical categories. The injury also breaks up one of the NHL’s best, and most consistent, defensive pairings, and creates a shuffle throughout the defense.

The Predators sit in sixth place in the Central Division, five points out of a wild card spot and six points out of the division’s final playoff berth. Nashville does, however, had a +3 goal differential, which ranks seventh best in the conference and is superior to the four teams directly in front of them. In terms of shots on goal per game, the Predators have the NHL’s third best differential (+4.8, behind just LAK and CAR) and rank fourth across the league in both shots for and against.

“5-on-5, they score goals and they’re differential is quite high,” McLellan said of tonight’s opponent. “They throw a lot of shots at the net, they get a lot of offense from their blueline, so there are a number of factors that come into play there for us to be aware of and prepare for.”

How Far They’ve Come
The home opener victory over Nashville feels like three years ago, not three months.

The Kings took a three-goal lead into the third period, ahead 4-1, promptly lost that lead, but went on to win the game 7-4 off of an Alex Iafallo game-winning goal with 59 seconds left, followed by a pair of empty netters to re-gain said three-goal advantage.

“We’ve come a long way, we’ve learned a lot,” Iafallo said. “We’ve made some mistakes, we’ve corrected them. We just go through the whole process so many games in and we’ve learned a lot about ourselves and how we need to play every day. Going into this game, we’ve got to take off from last game and keep going.”

While an exciting game to begin the home slate, the Kings have progressed substantially since that first Nashville game at STAPLES Center. Many of the mistakes that the team was making at the time are things that have been corrected with experience, and with comfort in a new system, and both teams enter tonight’s rematch as different looking hockey clubs.

“Yeah, we got a lead, they came back, we had to score late, couple empty netters…7-4 , I don’t think is a good indication of that game,” McLellan said. “It’s probably a little tighter, a little more intense than we wanted to, based on how well we played early in the game, but even looking at the pre-scout and going through some of the mistake we were making at the time, there were a lot of long mistakes, sort outs, who’s picking what up. I think we’ve improved in those areas, but also in many others, but they have too. They grow their game, they get better, young players get more experience, so it’ll be a tough one tonight.”

LA has had its ups and downs since that home opener, but recent play has shown more results on the upswing, as opposed to the downswing. The Kings are 6-3-2 in their last 11 games, and there’s been a renewed energy, and sense of momentum, that has built from game-to-game.

“Oh yeah, for sure, you can feel the atmosphere going, I think there’s momentum going into each game,” Iafallo said. “I feel like that that atmosphere, the energy is something that we’ve been looking for”