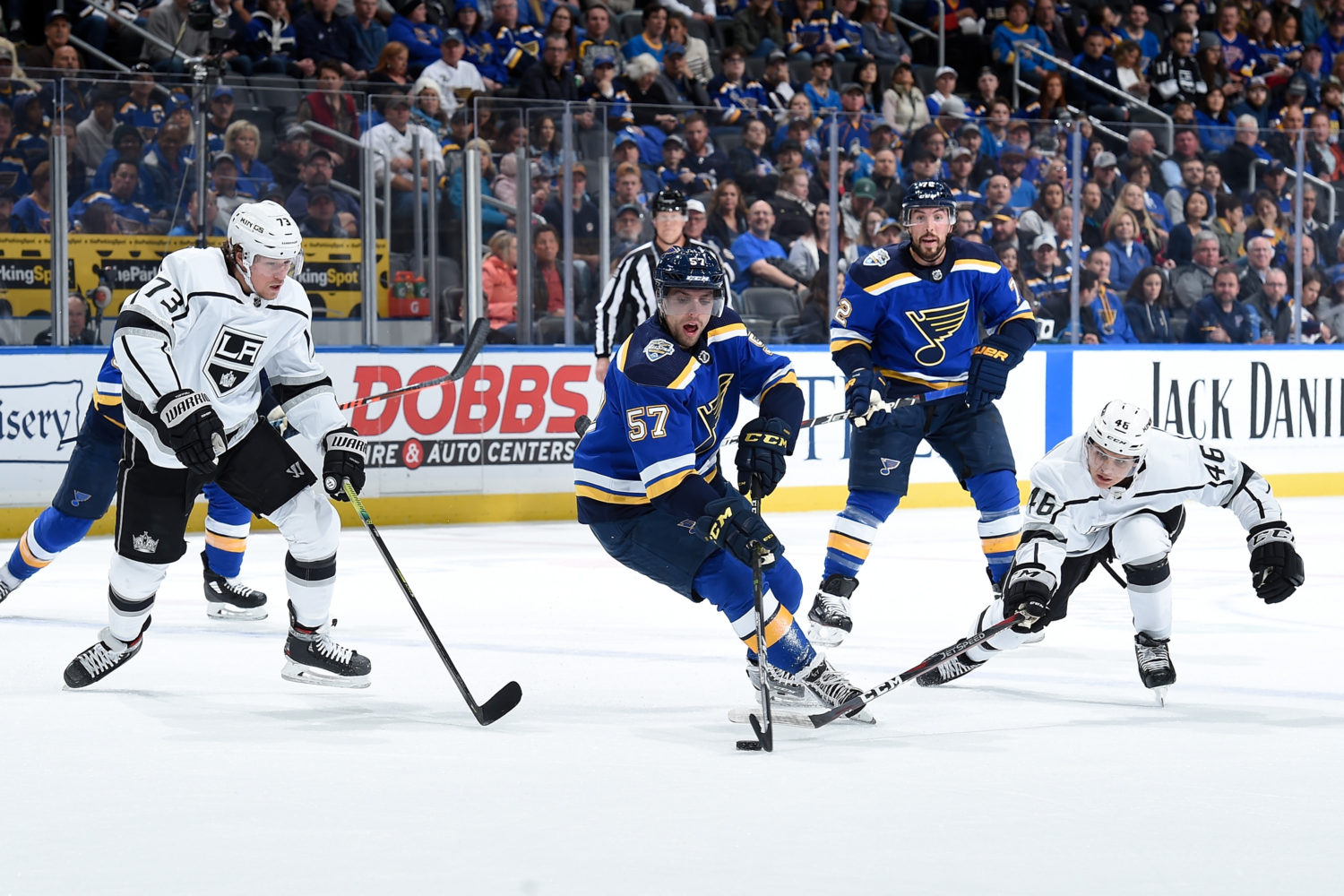 Insiders. A fine Monday afternoon to you. The LA Kings practiced at Toyota Sports Performance Center at 11:00 a.m. and might’ve showed some changes to their forward groups. To the Beemobile!

— Based on a pair of drills, those forward groups appeared to be Iafallo-Kopitar-Brown, Kempe-Lizotte-Wagner-Kovalchuk, Clifford-Carter-Lewis-Amadio and Luff-Prokhorkin-Toffoli. Defensive pairs with an odd number of participants aren’t easy to discern, so let’s wait for warm-ups Tuesday night.

McLellan shared that the team worked on “a lot of situational stuff” such as clarifying responsibilities in various game situations and tinkering with aspects of structure that might’ve fallen off during the compacted stretch. “We haven’t had that type of practice in two weeks, and we’re probably not going to get that practice again for another two weeks,” he said.

— Speaking of the tightened schedule, Blake Lizotte has emerged from it no worse from the wear.

And that’s impressive, given that Saturday’s loss at Calgary was his 31st game in 64 calendar days, a breakneck rate of play that surpasses the career-high 56 games he played with NAHL-Minot and USHL-Fargo. Of course, those games were spread over seven months and were largely confined to weekend trips.

It would be easy for a young player’s performance to oscillate when adapting to the NHL routine, but Lizotte’s motor has been humming along, and he’s been playing some of his best hockey of late. He’s managed his sleep and nutrition well during this stretch but also credits the off-season intense training more than any adjustments he’s had to make in an NHL dressing room.

“You’ve got to manage your sleep, especially during stretches like this,” he said. “If you’re not getting the right amount of sleep you’re not going to play well and not have any energy. I’m kind of a body freak, so I’m careful what I put in it and manage my rest well. I’ve definitely had to intensify that a little more, especially during this stretch. You hit roadblocks during the year where you’re feeling tired and you push through and get energy. It’s a lot in a lot of days, but it’s been a lot of fun.”

That may be true, but he’s handled it appropriately. His possession and shot rates over the past 10 games are all in the black, while his expected goals share is the third best among team forwards.

“I think it’s the prior preparation you’ve done leading into the season more so than maintaining [your conditioning],” he said.

His goals rate would be even higher if not for the pesky centimeter of ice beyond Edmonton’s blue line that drew scrutiny on Friday. But Lizotte’s been playing his game appropriately as a nuisance or a “mosquito in a dark tent,” to borrow from Trent Yawney, and continues to show a very good motor despite amassing games at a much faster rate than ever before.

“At the beginning of the season – and we even talked about it – I wasn’t sure our team’s engine was where it needed to be,” McLellan said. “It worked, but could it keep the pace up in some of the games? And even when we were tired, we were still able to skate with teams. QWe were able to grind it out with teams, so I think the team’s engine is getting better. We’re able to play longer at a faster pace, and that’s due in part to some of the younger players, but also the older players adapting and changing the way they’ve done things, so progress has been made there. Has it converted to the wins and losses column? Not yet, but it’s giving us a chance.”

The next stop, with the engines humming appropriately and the structure settled into place, will be to transfer their strong performances into points in the standings.

“We need to be able to convert honest efforts and will and character and all those words that we use as coaches into a win every now and then so there’s some reward.”

— Tyler Toffoli’s had a rough stretch. He has two goals and four points in his last 13 games, though three of those points game in the 5-1 win over Edmonton last month. He’s been held without a point in 11 of those 13 games.

“Toff has more to give. That’s how I would assess him,” McLellan said. “There’s areas of the game that if you watch him closely, he’s elite at right now. He’s really good on the boards, he’s making really good breakout plays, he’s not turning pucks over in that area. But after that, it’s the up-ice part, it’s putting yourself in position to have success offensively, and we’ve got to get more from him, whether it’s power play or even strength, for him to have success individually and us collectively.”

— Arthur Kaliyev and Alex Turcotte, both 18-year-old underagers, were named to the United States’ preliminary World Juniors roster earlier today. More on that to come, but the early sense I have is that Turcotte is close to a virtual lock for the tournament while Kaliyev is more of a bubble-type player. For Kaliyev, it’s important that he shows USA Hockey that he’s made responsible strides away from the puck. (He has, and he showed that at the World Juniors Summer Showcase.)