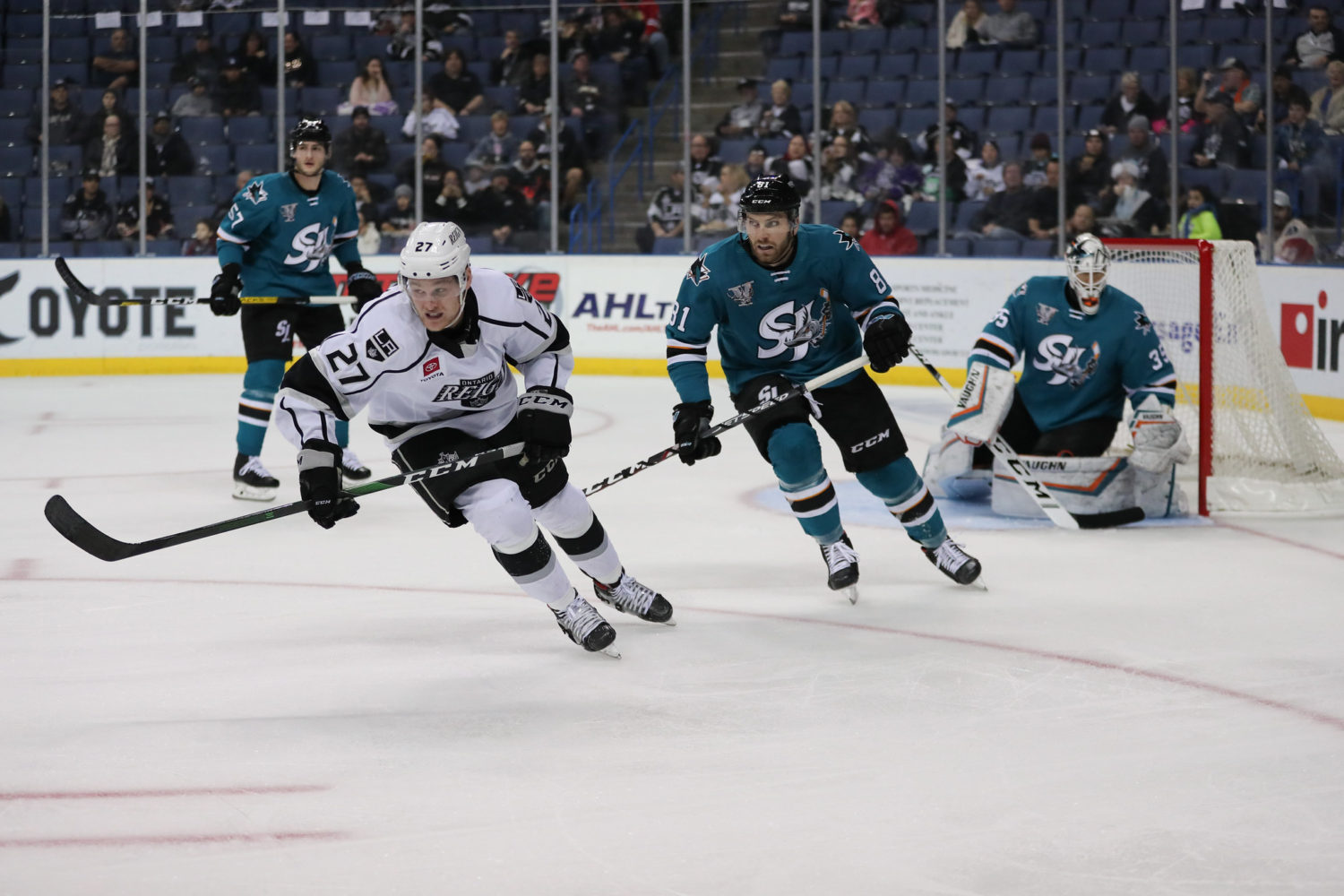 TONIGHT’S MATCHUP: The Reign and Barracuda are back in action tonight at Toyota Arena, as they conclude a back-to-back set. San Jose skated to a 9-2 victory last night in Ontario, its first win of the season over the Reign.

WHAT TO WATCH FOR: The Reign are expected to go with a similar lineup tonight against San Jose, but with a couple of tweaks. On late after this morning’s skate were defenseman Sean Durzi, along with forwards Johan Sodergran and Jacob Doty, while Drake Rymsha and Austin Strand were off earlier, indicating the pair of changes. Cal Petersen did not skate, while goaltender Matthew Villalta did, which points to Petersen being back in net tonight for Ontario.

HOME NOT SO SWEET HOME: The Reign began a five-game homestand yesterday evening, tied for the longest of the season, on a sour note with a 9-2 defeat against San Jose. Ontario has struggled at home this season, posting just a 3-5-2 record from 10 games played. The Reign’s .400 winning percentage on home ice is tied for the lowest in the AHL with Bakersfield, which has posted an identical 3-5-2 record at home.

TELL ME WHERE THE FRKS AT: Reign forward Martin Frk posted his second consecutive multi-point game last night, despite the defeat, as he tallied a goal and an assist. Frk also posted a +1 rating, despite the seven-goal differential. Frk leads all Ontario skaters this season in both goals (11) and points (16), and has collected multiple points on five occasions this season. Frk’s 11 tallies have him amongst the league leaders, tied for eighth in the AHL on the season.

CATCHER IN THE RY: Ontario defenseman Ryan Stanton scored his first goal in a Reign jersey last night, with his team’s second tally of the evening. Stanton has now amassed three points (1-2-3) from 14 games played this season, in addition to eight penalty minutes. Known more for his play in his own end, Stanton set a professional career high with five goals last season as a member of the Bakersfield Condors.

HE WENT TO JARET: Reign forward Jaret Anderson-Dolan made it four games from his last five with a point, as he tallied an assist yesterday evening in Ontario. The first-year forward leads all Ontario rookies, and ranks tied for second on the Reign roster in total, with 11 points (4-7-11) this season. Anderson-Dolan became the first Reign rookie to reach double-figures in points in Wednesday’s win over Stockton.

JONNY BE GOOD: San Jose forward Jonny Brodzinski collected two points against his old team last night, as he tallied a goal and an assist in the lopsided Barracuda victory. Brodzinski was a member of the Kings organization from 2015-19, and was a key contributor with the Reign, as he set a then franchise record in goals scored (27) during the 2016-17 season. Read more on Brodzinski from after last night’ game here.

SCOUTING THE BARRACUDA: San Jose is led offensively by forward Maxim Letunov, who is currently riding a seven-game scoring streak, extended with a goal and an assist yesterday. Letunov was one of 11 Barracuda players with multiple points in yesterday’s victory, and leads all San Jose skaters with 17 points (6-11-17) this season.