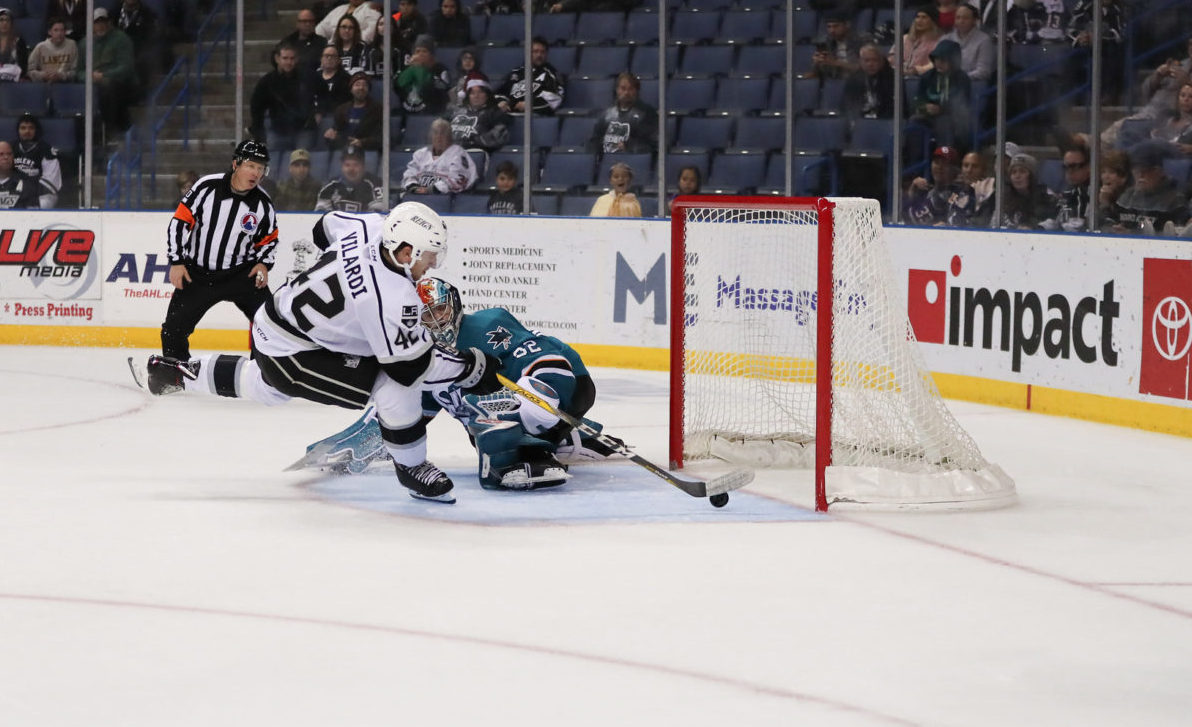 It wasn’t a heads hung, down on themselves group, but rather a determined group, prepared to battle back. Ontario got one in the first to stop the bleeding, a power-play goal from Kale Clague, and three in a wild third period, as it turned a 3-0 deficit into a 4-3 advantage. A late Barracuda goal, which may or may not have been a kicking motion, tied the game and forced overtime and then a shootout, but the Reign were not to be denied. Forwards Martin Frk and Gabriel Vilardi, who both scored in the third-period comeback, each scored in the shootout, while neither San Jose effort beat Reign netminder Cal Petersen, who earned the victory.

The win for the Reign was bolstered by the dynamic third period effort. Ontario was hungry, desperate and energetic throughout the third period, sustaining that level of play across the entire 20 minutes in what was perhaps the best period of the season.

It was a night where the Reign were not to be denied, and the comeback win makes a statement after last night’s lopsided defeat. Ontario earned a split on the weekend against a talented Barracuda squad, and made it 4-of-6 points from the three games this week as a whole.

On an individual front, Clague turned in one of his best performances of the season with a three-point night. Frk and Vilarid both scored big goals, while defenseman Ryan Stanton made it back-to-back games with a goal. Petersen, after he allowed three goals in the first, stopped all 22 shots he faced from the second period on, in addition to two in the shootout, including several highlight reel stops throughout the game.

The action doesn’t stop for the Reign, who are back with three more games next week, beginning on Wednesday at home against Stockton.

Gabriel Vilardi on whether he felt tonight was his best game of the season
Not necessarily. Just because you put up points or whatever, just because you get on the scoresheet doesn’t mean personally you’re playing your best. I thought I had some good plays and it’s been three weeks now and I’m getting more and more comfortable with the speed. My legs aren’t tiring out as much, I played last night…I played back-to-back, I feel good, I’ve got no problem with my body so I’m really happy. They’re doing a great job, helping me to keep track of everything, whether it’s tubbing, stretching, massage activation, all of that stuff. I’m doing a good job with that and I’ve just got to stay on top of it. It was a good comeback win for us.

On feeling more confident in the defensive zone
Yeah, there’s still some stuff. Like I’ve said before, I’ve really just got to keep my legs moving, and it’s tough when you get tired. I haven’t played much hockey in the past couple of years, so it’s pretty normal to get tired, I don’t want to say faster, but pretty fast. I’ve got to keep my legs moving, that’s the biggest thing, and they stop me when I get in trouble. Stutts and Mods, they’ve shown me a few clips and it’s just stuff that I’ve got to keep on doing and keep my legs going. Once I stop moving, I lose my guy and we play a lot of man-to-man in the d-zone, that’s kind of tough, especially if you’re out there for long shifts.

On his shootout game-winning goal
I wasn’t sure. I saw what Frky did and the ice was pretty bad, really bad actually, so I wasn’t sure if I should just shoot it, but instead…Frky scored and they missed so we were up one so I said I’ve got nothing to lose so I’ll make my move and it worked.

Mike Stothers on if tonight’s third period was one of the best periods he’s seen from the team this season
I don’t know, I mean, I just like the way we responded. We fell behind, and it looked a little bit grim there at one point, kind of snowballing from last night, but it was different tonight. The guys, they didn’t seem deflated, they still believed they had a chance, which they did, there was still plenty of hockey to be played. We just kept chipping away, which was great, got a big power-play goal which cut into the lead and we just went from there. We didn’t sit back, that was the best part, is we hunted. We hunted the puck, we hunted our opponent and when they had the puck, we wanted it back instead of just retreating, which is what we were guilty of last night and early on in this one as well.

On why he didn’t make a move, such as pulling the goalie or calling timeout, when it was 3-0
Well, to be honest with you, you don’t want to start tinkering around with goalies back-to-back. That’s never a good feeling for them and Cal’s done a hell of a job of bailing us out all season long, so I’m not going to bail on him, he’s the guy. You stick with it. A guy like Cal, I know him well enough that he’s going to battle and really, I can’t fault him on any of the goals anyways, so that’s not going to do anything. You can call a timeout, and we have, but really it’s just a matter of “guys, there’s lots of time left here and you’ve got to believe it.” Again, it was a feeling that you have on the bench, it was just different the way they were carrying themselves, so you didn’t think that you had to go down that route. Cal wasn’t coming out tonight, regardless.

On Kale Clague’s game tonight, and it was one of his best performances of the season
He was real good. He was skating and he was assertive with the puck. He was showing all the signs that we were expecting of him coming out of juniors. I would agree with you that this was one of his better performances as part of being a defender, and that’s where he’s still lacking. I think it’s been presented to him in a number of different ways, so hopefully he’s applying it.

On his defensive combinations tonight
That’s hard. Kale looks like he’s comfortable on the right side, Toby still doesn’t, to me, look comfortable on the right side. It’s not really fair to him either, but I really wanted to give Chaz another look tonight. He’s been a great teammate, he hasn’t played a whole lot, he just does everything you ask of him as a coach and as a teammate, he never gets down and he keeps plugging away. He had a tough night last night, he was [-5], so I know when he came in this morning, he was expecting, and probably everybody was expecting that he was going to be the odd man out, but it’s not really fair to him. He’s been in and then he’s been out, then he’s out and he’s out and he’s out. It was a tough night, but it was a tough night for everybody, it wasn’t just him, so I didn’t want to single him out, because he’s been beyond terrific and he can play, so we made the decision to keep him in. Now you’re dealing with the four lefties and the two righties and that makes it hard, but I mean I keep telling you and you and anyone else that will listen, why wouldn’t you want to play both sides? Why would you pidgeon-hole yourself into “I’m only a left defenseman or a right defenseman”. You want to play in the show? Whatever side you need, I’m your guy. I just think why not do it here in the American League and then once they get up top, put them where they’re most comfortable.