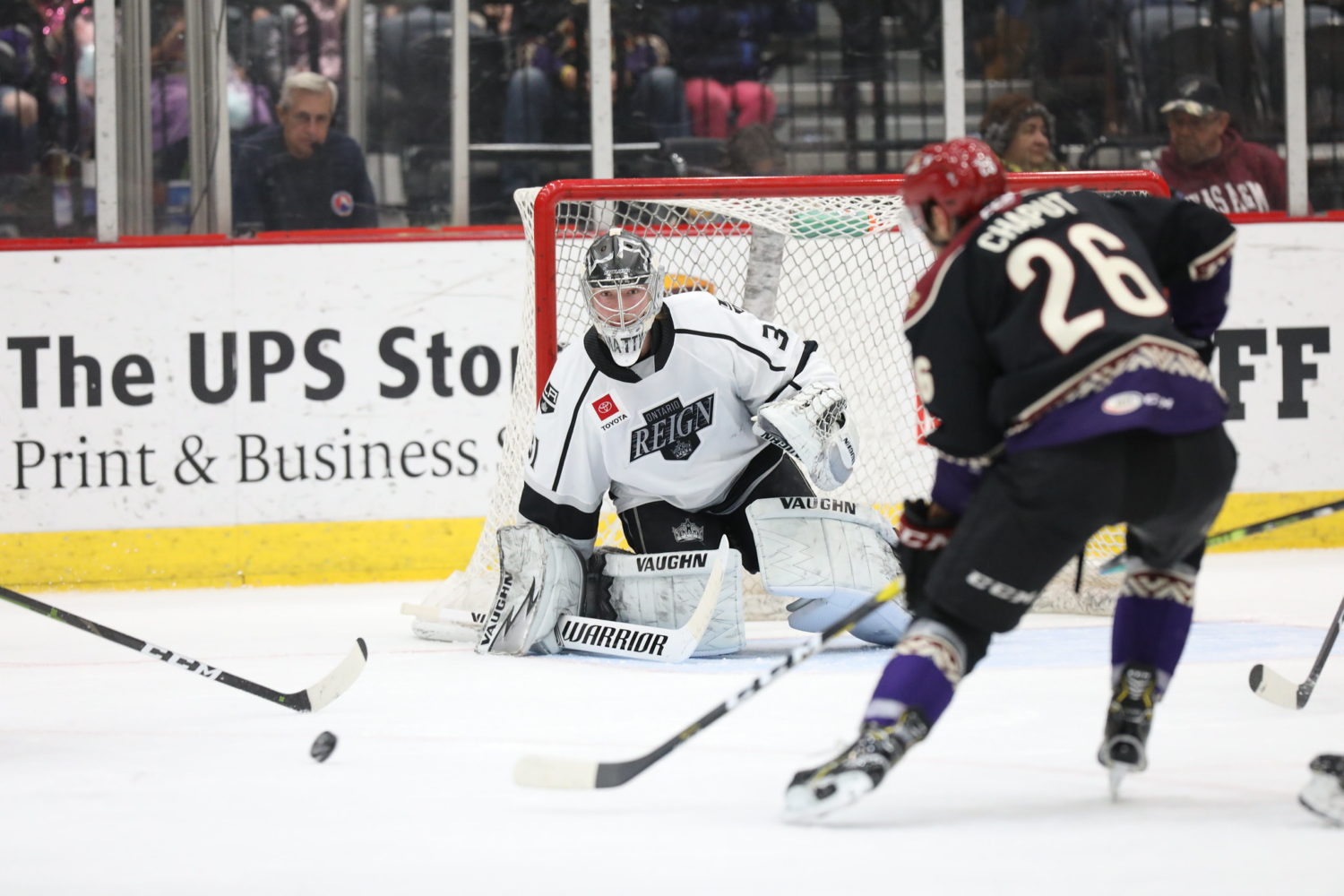 As the Ontario Reign dropped their fifth consecutive game, tonight’s defeat was perhaps the most frustrating, disappointing, or whatever similar adjective you prefer for the group.

For the majority of this evening’s game, Ontario played well. With a 2-1 lead in the third period, the Reign didn’t sit back and try to defend, but rather attacked and came close on a few occasions to getting what would have been a valuable insurance goal. With 3:30 left in regulation, however, the Reign went to the penalty kill and conceded their second power-play goal of the evening, before Tucson won the game through forward Andy Miele with just 66 seconds remaining on the clock.

Penalties against were once again a story, as the Roadrunners went 2-of-5 on the power play as they swept the weekend series against the Reign. Ontario did get a power-play goal of its own, through Rasmus Kupari, but was unable to hold onto a lead down the stretch. The Reign also got an even-strength tally from forward Martin Frk, who was back in the lineup this weekend for the first time since November 6. At 5-on-5, the Reign held their own against the division-leading Roadrunners, but lost the special teams battle in both games.

Credit goaltender Matthew Villalta, who was admirable in his first career AHL start. The 20-year-old netminder made 35 saves on 38 shots, including a few worthy of a highlight reel, most notably a glove save against a 2-on-1 rush and an athletic right-pad save early in the third period. Ontario entered tonight perhaps not knowing exactly what it had in net behind Cal Petersen, who had started the team’s first 17 games. Villalta’s play tonight goes a long way towards some solidity in the backup role, and his effort tonight was commendable.

The two late goals against sting, as it cost the team what would have been perhaps a signature road victory against one of the AHL’s top opponents. The Reign will look to regroup this week with a 3-in-4 on the docket, beginning on Wednesday evening on home ice against Stockton.

Martin Frk on the frustrating ending, after some good signs throughout the game
For sure. I thought the first two periods we played good, we played better than last night. Again, we took too many penalties, we took one with [less than] five minutes left and they scored on that power play, then it’s 2-2 and they’ve got the momentum going and then they got another one. It’s hard, it’s frustrating for us, everyone’s frustrated. You want to keep winning, you don’t want to keep losing, especially when you play so many games against your opponents in the division, so you’re giving up points. It’s frustrating and we’ve got to go figure it out, because it cannot be like that.

On if it’s tough to get into a flow 5-on-5 when there are so many penalties against
It’s hard, but it’s hard for the PK guys too, right, because they get a lot of minutes there. It’s not fun for them, because they’re getting gassed and then they’ve got to go play after, 5-on-5, and some of those guys play power play too, so it’s hard. For me, yeah, when you sit there for too long, you’re kind of losing the momentum or you’re getting cold a little bit. It’s for sure hard, but we’ve got to figure out how to not take so many penalties and not give them so many chances, play more 5-on-5.

On how the Reign can generate more goals offensively
We’ve got to put more pucks on the net, from the forwards, from the D. When we have the chance, sometimes we hold it too long or try to make an extra pass. When you make an extra pass and they caught it or something, you don’t get a puck on the net and there’s no second chance or anything. We talk about it all the time, we have to put the puck on net and good things happen when you put pucks on the net. We’ve got to do better, it gets frustrating when every time we play, they’ve got more shots than us at the end of the game. There’s something we need to improve on and be better. When we don’t shoot, we can’t score.

Mike Stothers on Matthew Villalta’s performance in his first AHL start
I thought Matt played one hell of a good game. He deserved a win, or at the very least, one point. It’s unfortunate that it ended the way it did, but it does not diminish his outstanding performance.

On if there are positives to be taken from the team’s 5-on-5 play this weekend
We are making strides. Baby steps for now but the guys are wanting to learn and improve. [Reporter – It seemed like, in some areas, baby steps on special teams too with the PPG from Kupari, but still 5 PP’s against, which turned into two goals. How does the staff continue to work on that area with limited time before three games next week?] Discipline and video. Busy week coming up for sure, but we will continue to address our shortcomings in a positive way.