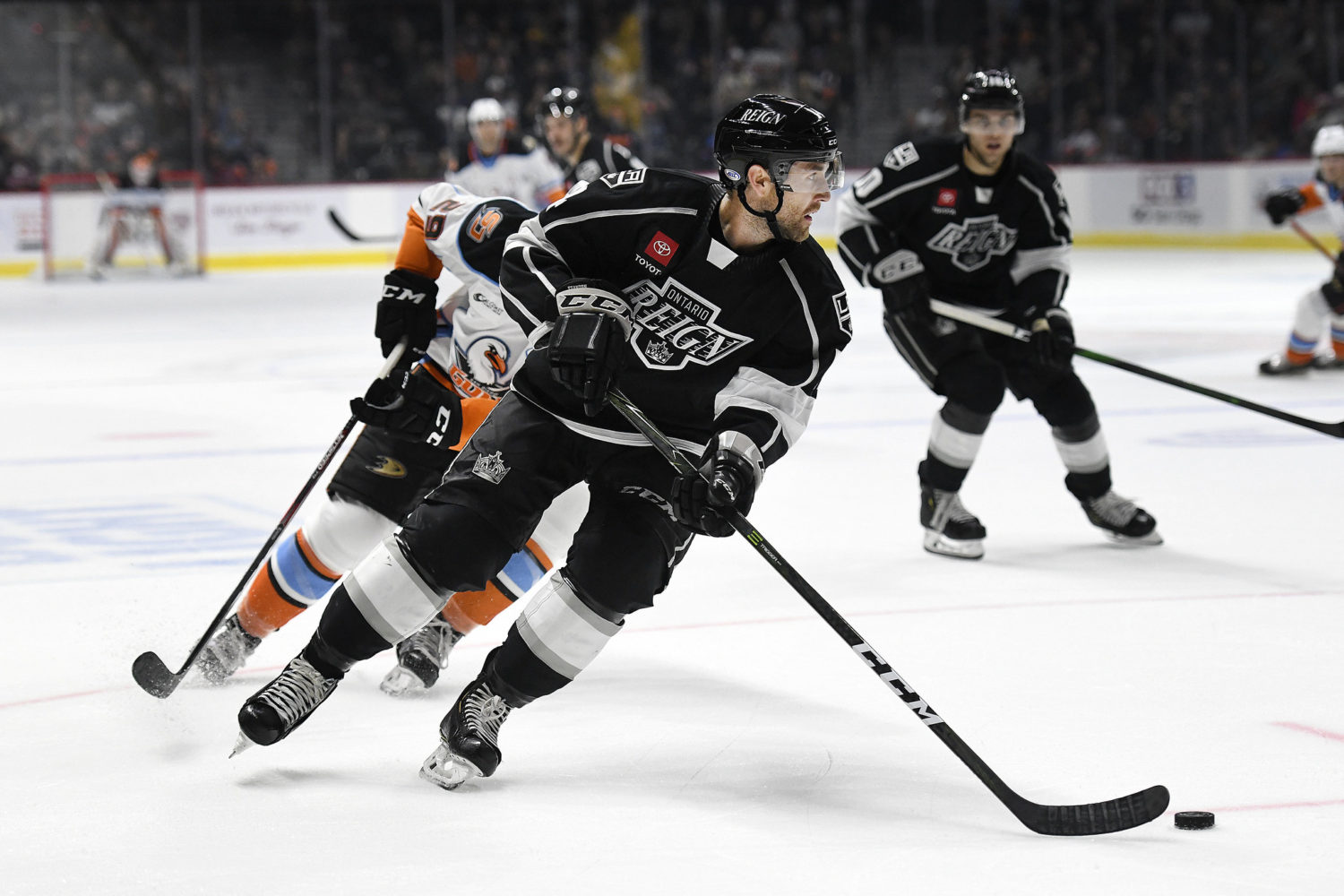 The So-Cal Series is tied at two on the season, after the San Diego Gulls completed the weekend sweep with a 5-1 victory over Ontario on Saturday evening at Pechanga Arena in San Diego. The Gulls scored twice in the second period and three times late, sandwiched around Kale Clague’s third goal of the season, as the Reign dropped back-to-back games against their Pacific Division rivals.

Ontario kept things closer than last night’s 6-2 defeat, which saw it outshot by a 55-25 margin, with the final shots on goal count tonight standing at 37-29 in favor of San Diego. The difference on this evening was not the quantity of the chances for, but rather the quality. The Reign funneled pucks to the net throughout the game, but far too often those shots came from the outside or from sharp angles, without traffic to really trouble Gulls netminder Anthony Stolarz.

When the Reign did get bodies to the front, good things happened. On Clague’s goal, forward Sheldon Rempal worked on the forecheck and won the puck in the corner to feed Clague at the right point. The second-year defenseman walked towards the middle of the ice and got his shot through, with traffic in front, for his third goal of the season.

The Reign also were unable to capitalize on a full two minutes of 5-on-3 power-play time late in the second period, when San Diego took three minor penalties in a span of just two minutes. Down just 2-0 at the time, the Reign did generate a few looks, starting off of a Jaret Anderson-Dolan faceoff win in the offensive zone, but couldn’t get the goal they desperately needed, seeing chances sent wide at key moments.

After an off day tomorrow, Ontario is back in action with a full week of practices, before it heads to Tucson to take on the Roadrunners for the first time this season in Arizona. The two teams play a pair of games this weekend at Tucson Convention Center, starting on Friday at 6:05 PM Pacific.

Ryan Stanton on the Reign cleaning up the PK tonight
For sure, I thought our penalty kill definitely wasn’t the problem tonight. We made some good blocks and I think we played them pretty well, they’ve got a good power play over there with lots of skill. I think the penalty kill did their job.

On returning to the lineup after being out with an injury for a few weeks
It’s always nice to get back in the lineup and back out there with the boys. Obviously would have liked for that to be a win, but I kind of felt a little bit better as the game went along and I just want to keep getting better and better, individually and as a team.

On the Reign’s inability to create more Grade A scoring chances
I think we’ve just got to sustain a little more pressure in the o-zone. They were doing a pretty good job of breaking out, too many one-and-dones. We’ve just got to get in on the forecheck, the d-men have got to get up and keep pucks alive. Just everyone doing their job will lead to more chances.

On the team cleaning things up more defensively tonight, and him providing a veteran voice to a young group of defensemen
For sure, I think we definitely gave up a little bit less chances tonight, I thought we were a little cleaner in our own end for sure. We’ve got lots of good, young d-men back there and I just want to help them out as much as I can, just kind of be a calming influence out there. If they’ve got any questions, or need to come to anyone, I’m more than willing to help.

Mike Stothers on what went wrong on the 5-on-3 the Reign were unable to score on
Well, we had a couple of good looks, and were guilty of missing the net, which I guess is a cardinal sin. When you do get an opportunity, you’ve got to at least make sure you hit the net 5-on-3. If I’m going to take anything from it, at least we won the faceoffs on the 5-on-3, where as before we’ve had them where we’ve lost the draw and they’ve cleared it 200 feet. It’s all a part of the process. The other side of the coin, you can look at it as they had a 5-on-3 and we killed it off. I’m not going to dwell on any one thing specifically.

On a focus this week in practice on getting to the dirty areas of the ice, but not being able to do it consistently tonight
It’s a little bit easier during the week, because we’re playing against each other. It’s not all that uncomfortable to go to the net front, because you’re playing against your teammate – typically, we don’t battle as hard against your teammate. The key to it really falling into place for us is when we’re going to establish our territory in front of their net and stay there against the opposition, when their whole approach is to prevent you from doing so. Again, it’s something that we always want to get better at, and we’ll continue this upcoming week to stress that fact.

On getting Ryan Stanton back in the lineup and what he brings to the defensive core
He’s a veteran presence. His job is much the same as Sutts, Bouma and Kempe, their job is to make the young guys better, that’s what he’s supposed to do. He was on a pretty successful team last year in Bakersfield, their penalty kill was pretty good and he was a big part of it…we didn’t bring him here for his offense. Defending and being a good example for our guys in their end, kind of helping to settle things down and you’ve got to make some big plays and he did on the PK.

On getting production from the point, at a time when goals have been at a premium
It’s a good sign, you need contributions from every position. Again, you look at guys that are coming into the organization, they’re known for being offensive minded. If that’s what you do as a defenseman, you should make those plays and make sure you’re contributing. Part of the process for them is to help prevent goals. The stuff that comes easy to them is maybe the offensive side and we’ve got to make sure that we’re improving the defensive side so that they’re becoming better defenders, so that we’re not giving up so many shots or so many goals against.