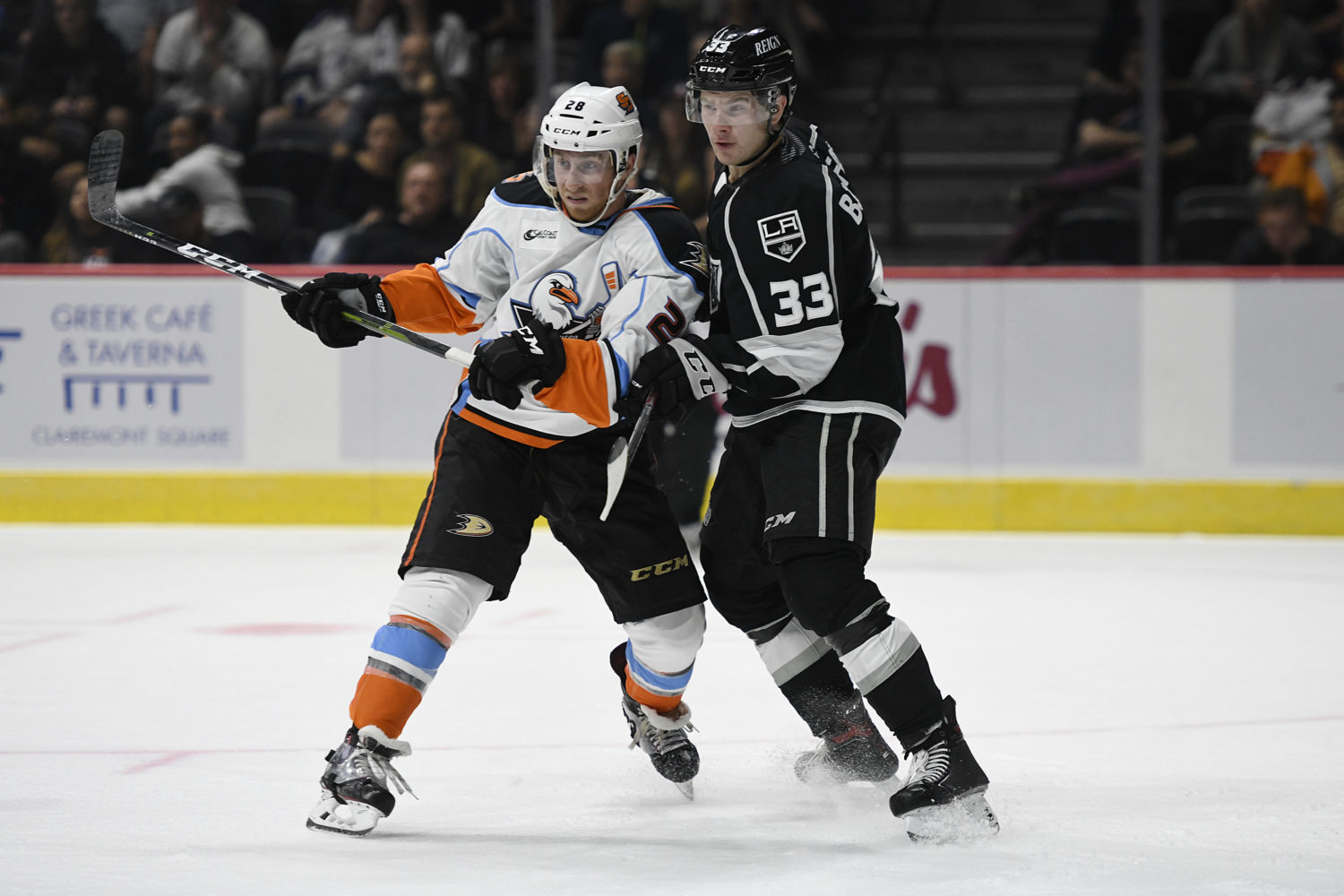 TONIGHT’S MATCHUP: The Reign and Gulls return to action this evening with a rematch in San Diego. The Gulls took round one of the home-and-home set this weekend, as they won in a 6-2 final yesterday at Toyota Arena.

WHAT TO WATCH FOR: Ontario is expected to make a couple of roster changes for this evening’s action, with defenseman Chaz Reddekopp and forward Boko Imama on late for extra work this morning. Look for forward Drake Rymsha and defenseman Ryan Stanton to check back into action, with Stanton returning to the lineup after returning from an injury for the first time since November 2. The Reign are likely to skate in an 11-7 alignment again tonight, similar to last night’s game in Ontario. Expect Cal Petersen to go again tonight, as goaltender Cole Kehler was the only goaltender on the ice in a partial morning skate today in El Segundo.

BIG SEAN: Ontario defenseman Sean Durzi scored his first career professional goal yesterday evening, as he tallied early in the third period which brought his team to within a goal at the time. Durzi’s goal came in his eighth professional game and is also his first professional point. The first-year blue liner returned from injury in late-October after he suffered an upper-body injury on Opening Night.

FLEW THE KUP: Rookie forward Rasmus Kupari scored the first goal for Ontario last night, a mid-second period tally. Kupari’s goal was his third of the season, his fifth point and the Finland native has now scored in back-to-back home games. Read more from Kupari in last night’s game recap.

NEXT MAN UP: Ontario is without several of its top offensive weapons, starting with Martin Frk (7-4-11), who remains out of the lineup with a mid-body injury. The trio of Matt Luff, Carl Grundstrom and Nik Prokhorkin all remain up with the LA Kings, who are in action this afternoon against Vegas at 1 PM.

SHOTS, SHOTS, SHOTS: Ontario goaltender Cal Petersen made a season-high 43 saves on a season-high 49 shots faced, despite exiting the game midway through the third period with the game out of reach. The Reign surrendered 55 shots in total, the most they’ve conceded in a game this season, with Cole Kehler stopping 6-of-6 in relief. Ontario gives up the most shots in the AHL on a per-game basis at 37.73.

SCOUTING THE GULLS: After last night’s victory, San Diego has won six of its last seven games – The Gulls’ streak began following a defeat in Ontario in late-October, which brought their record at the time to 0-6-0. Gulls defenseman Chris Wideman scored twice and added an assist in last night’s win, while defenseman Simon Benoit (1-1-2) and forward Justin Kloos (0-2-2) each had multi-point games. Anthony Stolarz, who earned the victory yesterday, made 23 saves on 25 shots and has now won six straight starts.