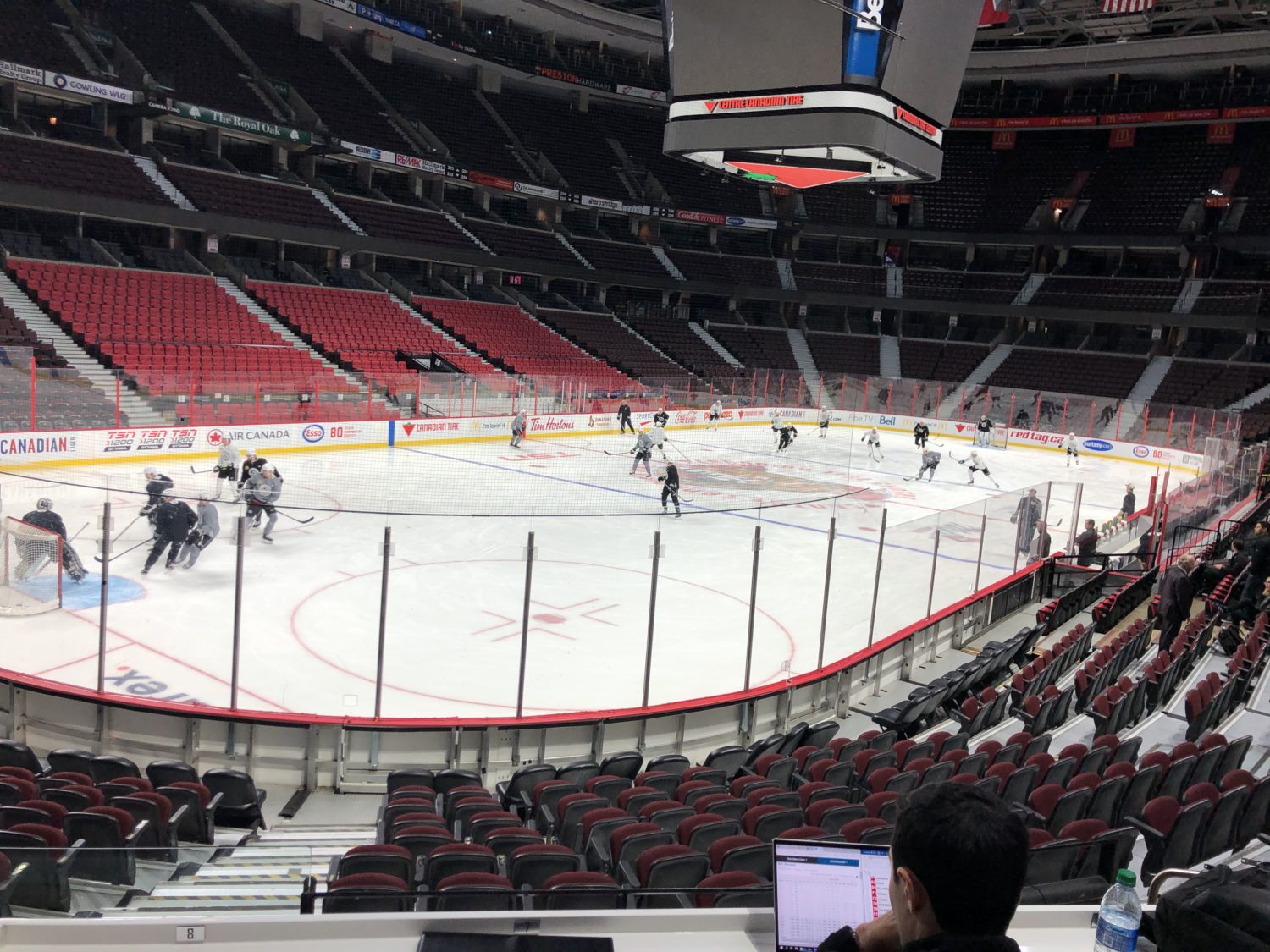 Good evening from the Ottawa suburbs. The LA Kings practiced at nearby Canadian Tire Center at noon; everyone was accounted for, and no changes to any lines or pairings were apparent. The skate opened up with the closest thing we’ve seen to Calvinball. “It was everybody-on-everybody,” Todd McLellan said.

“A little two-puck scrimmage. Mix it up. There’s another form of warming up and having fun. I think the guys were a little bit surprised that that came out, we haven’t done it before. And it inevitably ends up being about 12-versus-1 in one end and 12-versus-1 in the other end, but we had fun.” And once the legs and lungs were going, McLellan delved into more teaching as they continued to hammer down structural and special teams detail.

— And onward we go. There was the commonly held realization between coaches, players and media that the team had played a solid, in control, relatively event free game in Tuesday’s loss. “First time all year we’ve won the special teams battle and lost the game. I don’t think that happens really often, but it did last night,” McLellan said.

And there was the continued clarification that they’re thirsty for wins and aren’t satisfied with moral victories. But the fact that they “moved the needle forward,” as McLellan has encouraged, provided some solid footing. For Anze Kopitar, that came in the form of sharper defensive zone play and reduced scramble-and-react situations.

“Every team’s going to play in your zone. Every team has good players that are going to make plays,” Kopitar said. “We didn’t give up a whole lot. The one thing on PK, [John] Tavares shot it over the net, OK. But eventually those breaks can go our way, too. We’ve just got to find a way.”

Tavares obviously had a glorious look, but there were still advancements made in shorthanded play in that they weren’t burned by their mistakes, which they minimized. “I think they performed with a little more confidence,” McLellan said. “That’s a dangerous power play there. They have guys that can shoot it in little holes, and they move it really quickly. The quarterbacks have some pace, so just overall, [we improved] a little bit on the forecheck, certainly in the zone, but it generally speaking improved a bit.”

As he has shared a few times, McLellan doesn’t usually address the team after games, preferring instead for them to self-evaluate and channel any lingering emotions themselves. Last night was the same, as was today’s response to another difficult result.

“Disappointing part is we’ve given up a few goals really quickly,” he said. “When we fall behind, it seems like that dagger comes faster than we want it to. Had we kept it at two, maybe we could’ve pushed a little bit more, at least pushed it to overtime. So that’s the disappointing part of the night, but the overall presentation of the team, they were good today, they were alert in practice.”

— And because it’s never too early, November, 2020 NHL Draft rankings.

::deep, deep sigh, deeper than anyone has ever sighed::

It’s still a very early discussion here, but obviously Sam Cosentino is among those with the best information towards evaluating each year’s draft class, so give ‘er a look and argue about it for the next eight months.

I’ll join tomorrow night’s radio and TV broadcasts to talk about North America-based prospects, both draft-eligible and those whom the Kings own the rights of. There’ll be an interesting discussion on the Alex Turcotte and Cole Hults early season match-up, plus scouting updates on goaltending prospect David Hrenak and top NCAA-based draft prospect Dylan Holloway, a teammate of Turcotte’s at Wisconsin. The 2020 draft is shaping up as more CHL and Euro-centric NHL Draft than the 2019 draft, which practically read out HOME OF THE BRAVE with the first letter of every third kid picked. More to come from that and the Helsinki-based Karjala Tournament, which began today and Kings figures are represented at.

— More links: An interesting, in-depth look at Drew Doughty’s stark year-over-year change through 15 games from Mike Kelly of the NHL Network (The Point) … The Kings’ plan to shed veteran pieces and build around Anze Kopitar and Drew Doughty and their emerging youth has not changed, nor has Kyle Clifford’s reputation as the resident handyman, via Elliotte Friedman’s 31 Thoughts (Sportsnet) … Kopitar and Doughty are on board with the team’s direction, writes Pierre LeBrun (The Athletic), who also wrote that Los Angeles is “more likely to pass on trying to re-sign [Tyler Toffoli] and will look to trade him before the Feb. 24 deadline.” (The Athletic) … Lisa Dillman sat down with Dustin Brown (The Athletic) … It’s not the easiest time for Kings veterans, though Quick rejected the idea of dividing the dressing room by age. Rather colorfully. (The Hockey News)