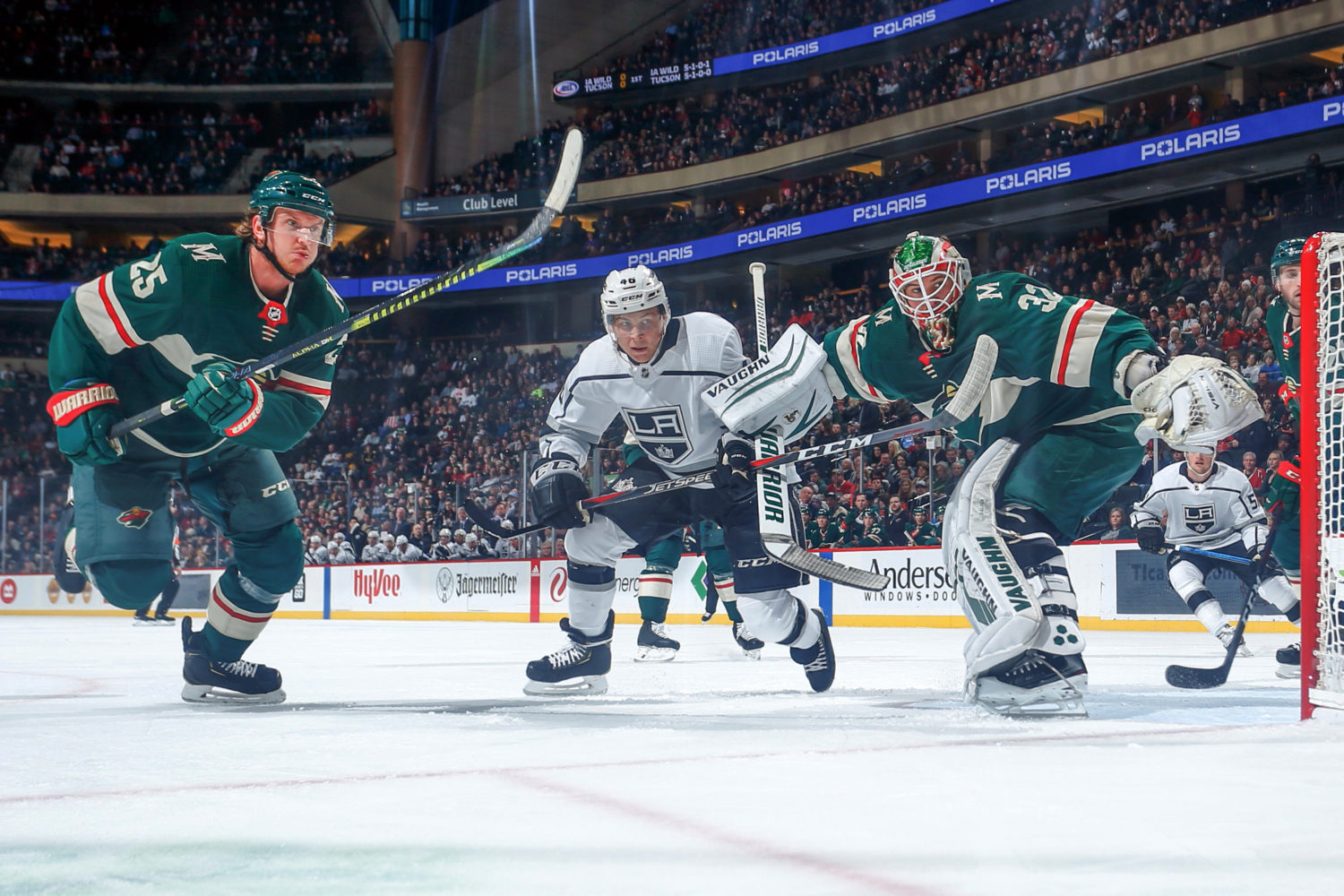 Todd McLellan, on what Minnesota did well and how Los Angeles fell short in the third period:
Well, let’s talk about our team. I don’t want to talk about their team. They have a coach, he can evaluate his own team. Ours was kind of a 50-50 first period. Thought we played a really good second period, a solid second period. We were on our toes and went after ‘em. Came out and we had the same game plan. Very strange goal scored early. I still think we recovered from that. It was the fourth one that hurt us, and then after that, I’m not sure that the belief system stayed where it needed to stay. We’re working on that, but it felt different than it did in Vancouver when we were completely done. Tonight, at least we worked through things. That’s the game in a nutshell.

McLellan, on whether the third period had a “domino effect” and things “spiraled” away:
Well, you start to press and you get frustrated and you work your way out of structure. You could see the mistakes at 3-1, especially at 4-1, started to leak, and we were lucky we didn’t give up five or six. We’re not structured well enough, we’re not built well enough yet to get out of what we’re supposed to be doing and roam, and I don’t think that works for any team in the league, quite frankly, especially ours. So, we have to continue to do it right, whether we’re up by four or down by six, and eventually we’ll get better and better at it. But right now we want to roam a little bit when it’s not going too well, and it just gets worse.

Ben Hutton, on what Minnesota did well and how Los Angeles fell short in the third period:
They came out, their forecheck, we knew that it was going to be strong. I thought we did a pretty good job in the first and second. In the third, the first goal, an unfortunate bounce, and then no one could really find it until they were walking down Broadway, and then they banged one in there and then we were kind of on our heels from there on. We’ve got to give them credit, they came pretty hard, and once we had the puck in the neutral zone, they just kind of set up a trap and waited for mistakes to happen.

Hutton, on the roots of the third period challenges:
It’s hard to put our finger on one thing. It does sting when they get an early goal, for sure, when you’re trailing, especially when I thought the second period was pretty dominant on our side. But overall, we’ve got to be mentally strong and not let that get to us.

Hutton, on rebounding to face Chicago tomorrow:
Yeah, exactly. That’s the good thing. We get to turn around, get back on the positive side.

Hutton, on scoring his first goal as a King, despite the loss:
Yeah, that one felt good. I had a couple looks these first few games. I was kind of itching for one, and I finally got one. It felt good, but like you said, if we got two points at the end of the night, it would’ve felt way better.

Hutton, on Drew Doughty’s defensive break-up shortly before his goal:
Yeah, that was huge. That’s what started it all was Dewey breaking up that two-on-one there. Juice saw me trailing in the late slot there and just had to put it home.

Blake Lizotte, on the experience of playing an NHL game at Xcel Energy Center despite the result:
I mean, it was cool. Like you said, I’m a competitor, so when we lose, it’s hard to take the positive out of it. But it’s like a dream come true to play here. It was awesome, but at the same time, as a competitor, it was not a fun night.

Lizotte, on taking the solo lap before the game:
Yeah, that’s pretty cool. You see that growing up. To have all my friends and family and supporters there was pretty cool with all the signs and everything. That’s the experience I’ll forever be grateful for.

Lizotte, on whether he saw a lot of people he recognized during warm-ups:
Basically, yeah. Basically, everyone in a Chisago Lakes [jersey], or half of the Kings jerseys, I probably knew who they were. So that was a really cool experience just seeing all the friends and family there.

— With the loss, Los Angeles fell to 29-22-15 all-time against Minnesota, a record that includes a road mark of 13-12-9. L.A. has lost four straight in the head-to-head series, going 0-3-1. These teams have two games remaining, November 12 and March 7 at Staples Center.

— Gerald Mayhew’s first period goal was the ninth goal Los Angeles has allowed during the first seven minutes of first periods through 11 games.

— All skaters recorded at least one shot on goal for the Kings.

— In his last 25 starts, dating back to a 6-4 loss at Washington on February 11, Jonathan Quick has allowed two goals or fewer six times and five goals or more nine times.