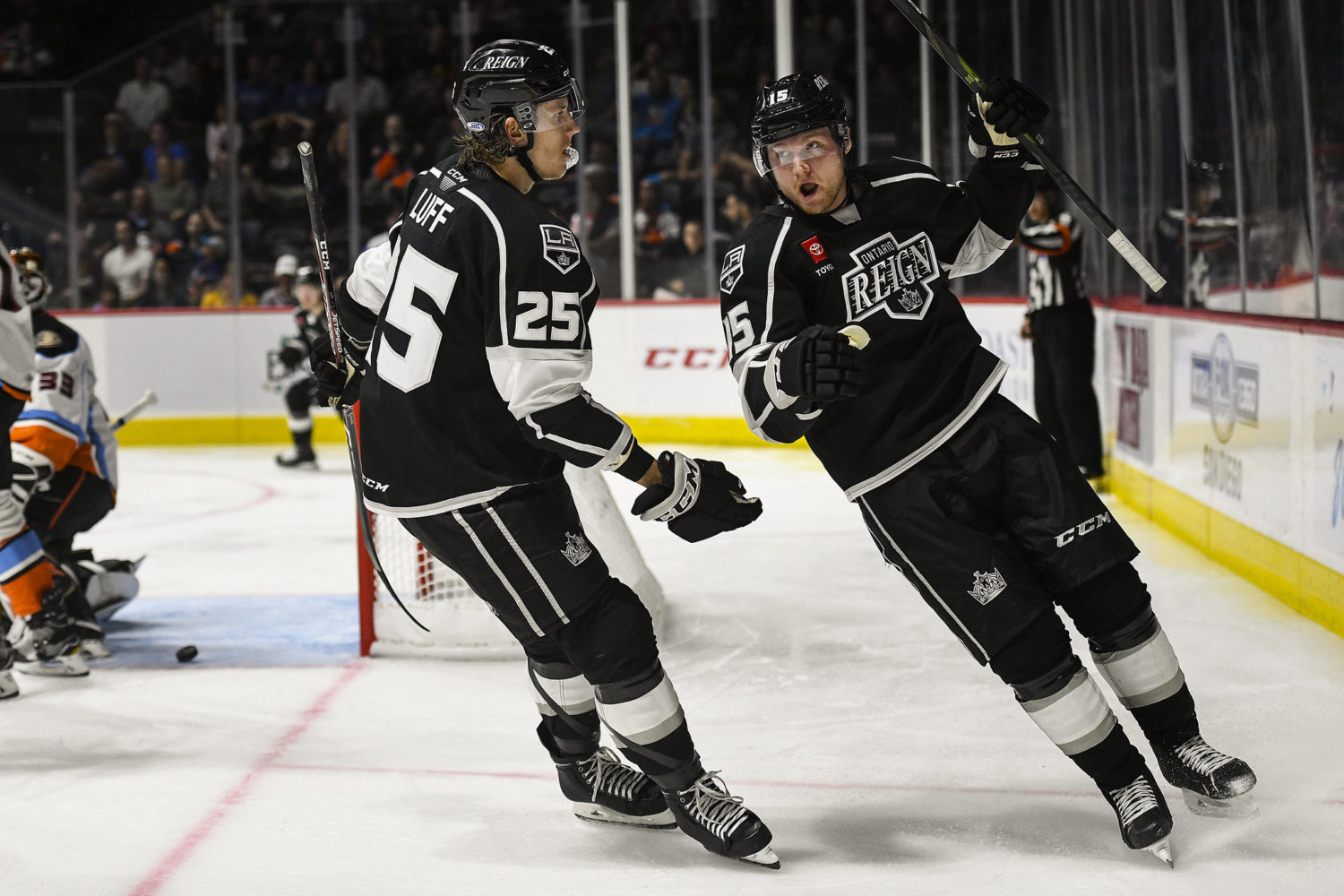 The Ontario Reign kept things rolling with a 6-2 victory over the San Diego Gulls, as they pushed their record on the season to 5-1-1.

The Reign got another two-goal effort from forward Carl Grundstrom, who has now tallied five times in his three games with the Reign this season, and three-point nights from forwards Martin Frk (1-2-3) and Matt Luff (1-2-3), with the former scoring the game-winning goal early in the third period. Forwards Jaret Anderson-Dolan (1-1-2), Mikey Eyssimont (1-1-2) and Brett Sutter (0-2-2) also had multi-point evenings, while goaltender Cal Petersen earned his fifth win of the season with 33 saves on 35 shots in net.

The always intense Ontario – San Diego rivalry featured a ton of penalties, with 13 power plays in total between the two teams, though the game did not feature a fight, typically trademark to the series. Though with some tensions escalating towards the end of the third period, it wouldn’t be surprising to see some emotions carry over into the rematch tomorrow evening in Ontario.

Grundstrom scored Ontario’s first two goals on the evening, and scored them in different ways. His first tally was a redirect of a Frk shot, where he got to a good position in the slot and got his stick on the puck for a high redirect. The second was a beautiful goal off the rush, where he and Luff executed a give-and-go, with Tobias Bjornfot providing the decoy, and Grundstrom sniped his shot over Kevin Boyle’s glove hand for the goal.

The win pushes the Reign atop the Pacfic Division for the time being, with a rematch against these Gulls awaiting them tomorrow evening at Toyota Arena. Ontario is 4-0-0 on the road this season but is just 1-1-1 at home, a mark they’ll look to push above .500 tomorrow evening.

Carl Grundstrom what’s gone well for him in his first three games with the Reign
Just getting to play with these guys, we play really good together, I think. We work hard for each other and it’s a lot of skilled players. I just have to be in the right position all the time and the puck will come there.

On if he was given any specific instructions when sent to Ontario, or just to get more ice time
They wanted me to play games and that was kind of it. I’m just enjoying playing games.

On if there’s a different atmosphere joining the Reign this season as opposed to when he came in last season
I think we had a good group of guys last season too, but we couldn’t win the games. We played good sometimes, but of course it’s way more fun to win. That makes everything easier, when you win games.

Mikey Eyssimont on the success the PK unit had tonight
I think, Coach Hajter talks a lot about it before every game and every game’s different. I think that so far, we’ve been able to adapt pretty well, especially tonight, on what Hajter wants us doing against certain power plays and certain players on different teams.

On limiting the number of penalties moving forward
We want to keep being a hard team to play against and being physical. I think we can minimize penalties by just being better with our sticks. If we stop taking the stick penalties, we’ll put ourselves in a better spot later in the season.

On adding penalty killing to his repertoire as a player this season
I think I’ve just embraced every chance I’ve gotten and tried to do my best to follow the system. I’m just trying to continue to block shots and play a gritty game on the penalty kill, while also trying to maybe find a break here and there.

On getting the late goal and a two-point evening
It’s always nice to get on the scoresheet, even though it was late in the game. It’s San Diego, we’re in San Diego, so we want to put as many in as we can, no matter what the score is.

On his line with Brett Sutter and Matt Luff
I think we make things easy for each other, as easy as we can. We all try to get in to be F1 on the forecheck, because we’re all hardworking players, but I think that skill, speed and grit has meshed together really well.

Mike Stothers on the success the Reign penalty kill had tonight, in eight times shorthanded
Well, I guess the added work they are getting is paying off? Certainly getting a lot of reps. Hajter puts a lot of preparation into what to expect from our opponents power play before each game. Once you know what to expect, you have to execute and our guys are doing a good job, then you have to think on your feet and read situations. The guys have been very committed to shot blocking and that is an absolute must – you don’t block shots you won’t be on the penalty kill. Finally, the goalie is always your best penalty killer. Cal was terrific for us again tonight.

On limiting penalties but not losing the aggressive menatlity
It’s not an easy question to answer because you want your guys to play hard and physical. In doing so, you run the risk of taking penalties. The stick ones…I am not a big fan of but I really feel there were some marginal, or weak calls against us? At one point the power plays were 8-2 in favour of San Diego. When your team consists of the names Kupari, Grundstrom, Kempe and Bjornfot it shouldn’t strike the same fear as the Broad Street Bullies of Philly in the 70’s. [Editor’s Note – The Broad Swede Bullies?]

On Carl Grundstrom’s play and what he’s added to the Reign offensively
Carl has a lethal shot. It’s heavy, and he has a quick release. He shoots in stride, he tips pucks and he goes to the net, that’s what a goal scorer does. He is very strong on the puck and is a thick, sturdy body for the opposition to try and contend with. He is an added threat and makes the most of his chances.

On the added intensity in Reign-Gulls games, and if he’s expecting an emotional rematch tomorrow in Ontario
It’s been a great rivalry, right from the first game of our first season moving out to California. Chippy, nasty, intense, borderline insanity at times, but you can never avert your eyes because it’s hockey the way it is meant to be played, neither team wants to give an inch. Best entertainment value for your buck and I hope Toyota Arena in Ontario is packed to the rafters tomorrow night. 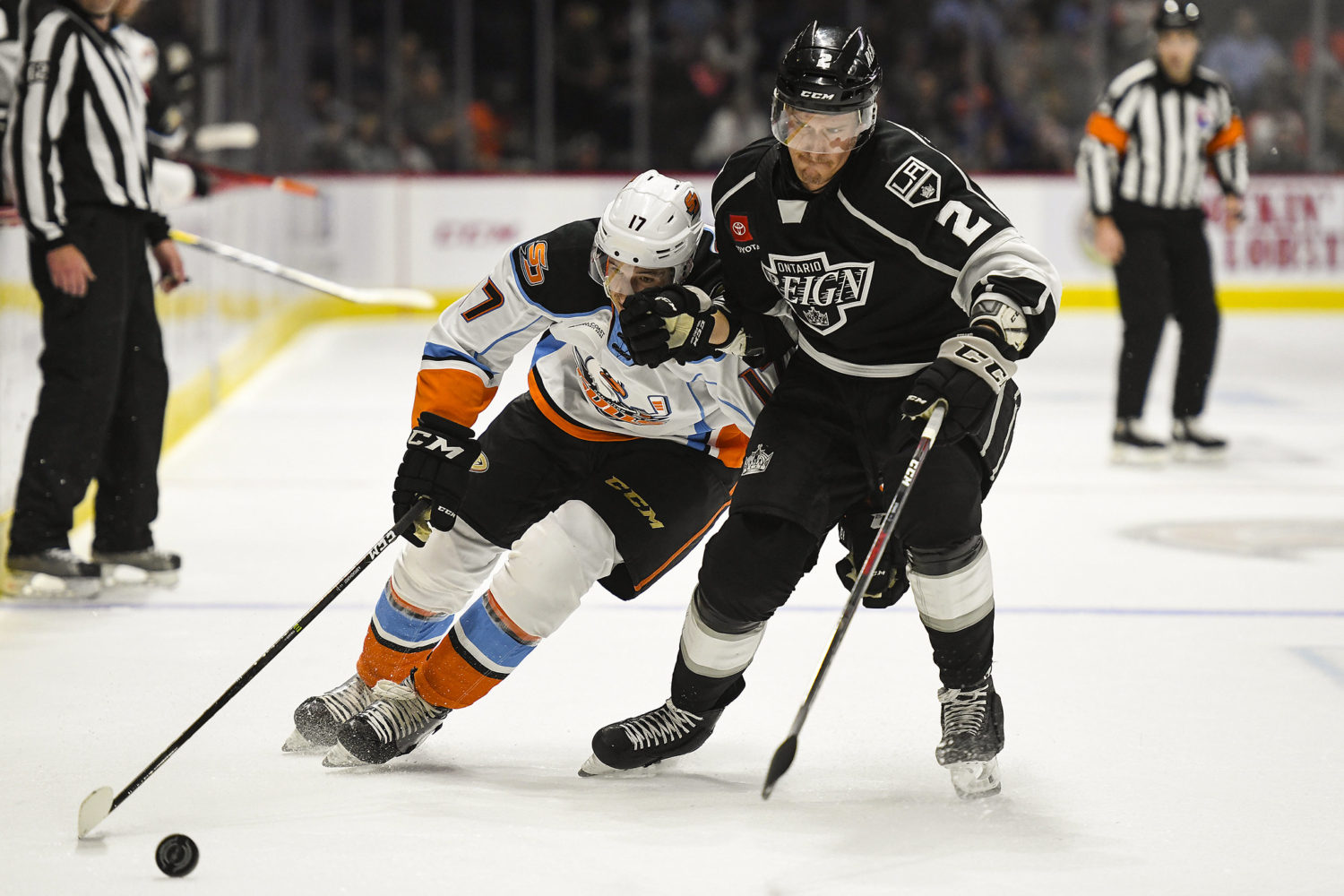 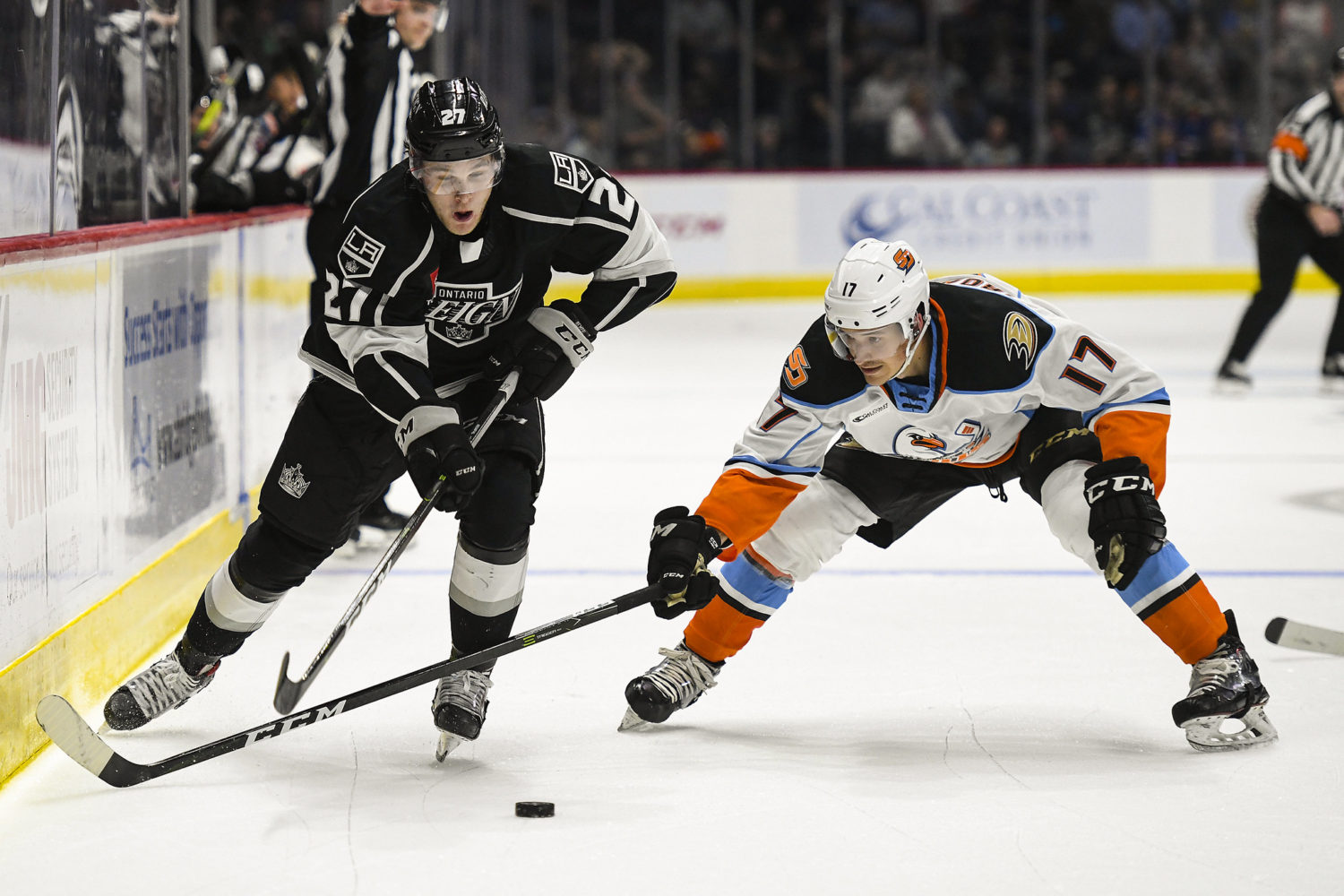 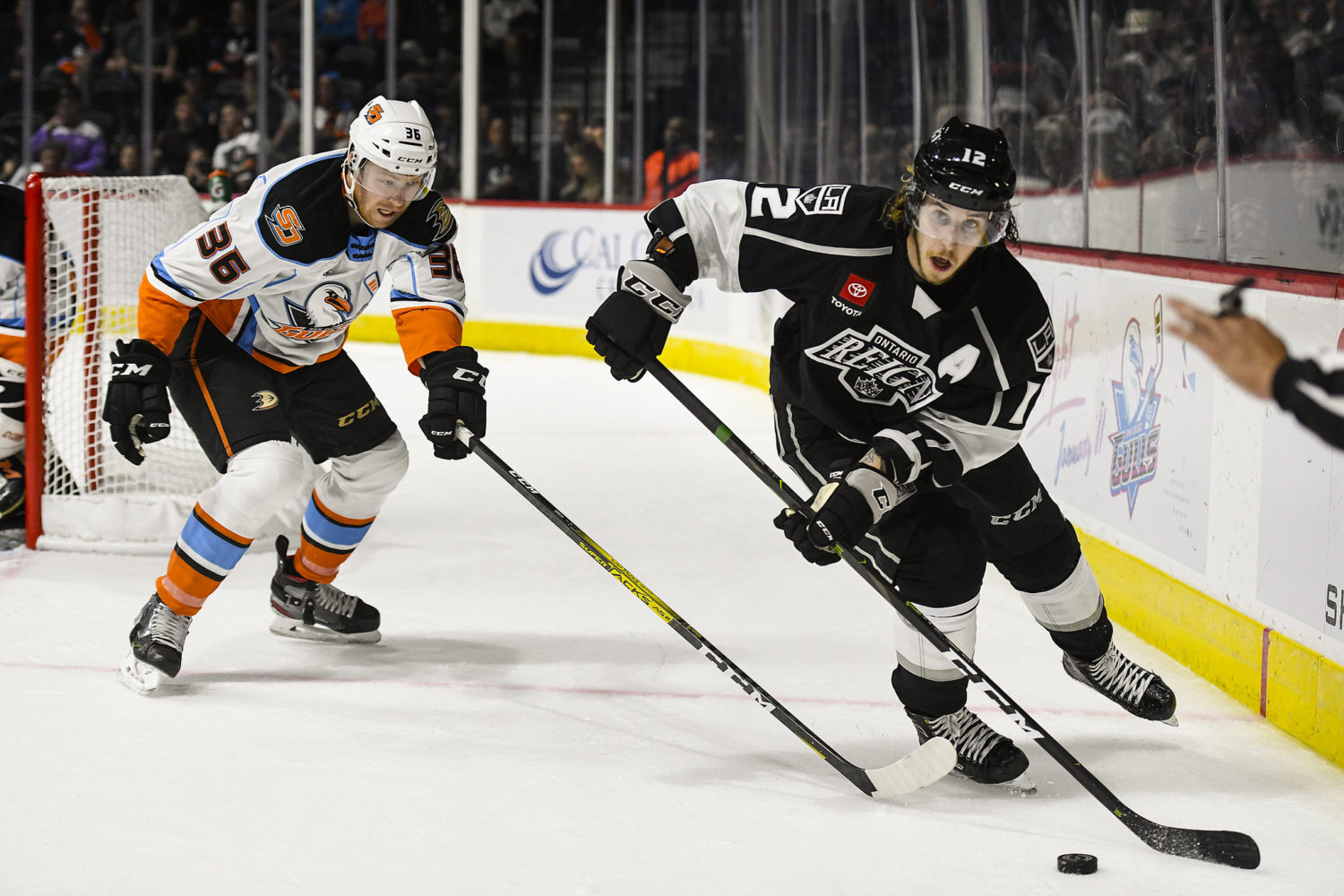