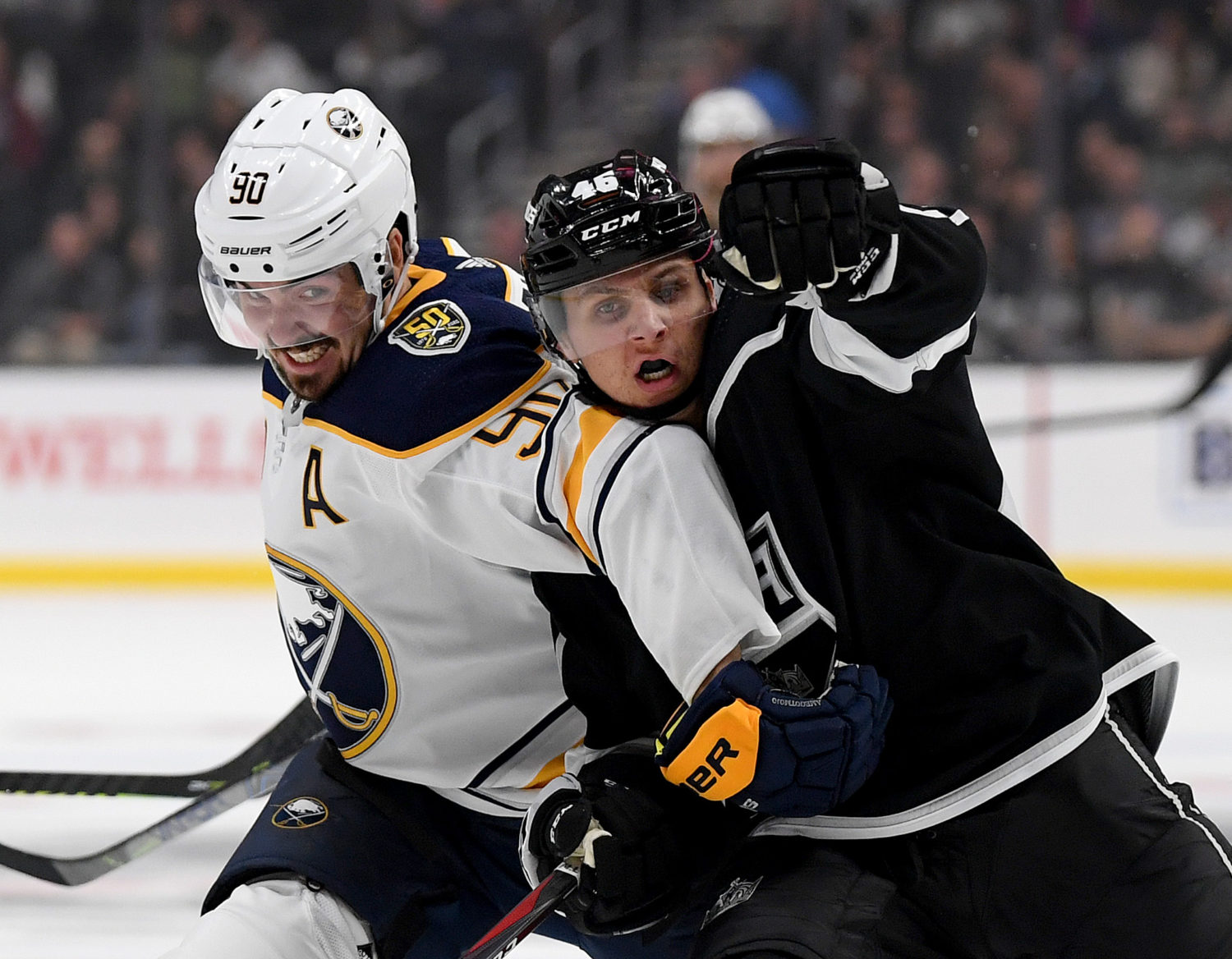 Todd McLellan, on whether 47 shots on the scoreboard represented “a good thing” or “a bad thing”:
A bad thing because the three and the zero are right underneath ‘em. That’s what you play for, you don’t play for 47 shots. Before I come and talk to you guys all the time, I think about what the game was like and the things that we did well and didn’t do well. We’ll take the 47 shots. I think the offense will come and come back if we continue to play aggressively. We’ve got to get hungrier in and around the paint. The secondary chances we get have to get up. Everything’s on the ice and we don’t get anything up and over, but that’s not my concern. My concern is our approach to the game early tonight. The same line, two shifts in a row, made the same mistake. Like, you think you’d learn the first time. So, that’s a concern of ours. We’re not giving up much, but we’re giving up long opportunities form end-to-end, and it continually has hurt us since training camp. Eventually, guys are going to have to get it or we’ll be chasing games forever.

McLellan, on whether the long chances against are inherently the “risk-reward part of the system”:
No, that’s stupidity. They know exactly what they’re supposed to do. You can go sit there and I could point out the individuals you can go talk to. I, we, you, everybody understands that nobody’s perfect and there’s going to be mistakes. It’s sport, that’s what it’s all about, and we can live with that. But when you continually make the same one over and over again, you’re going to find your ass in the stands pretty quickly. Like I told them between periods, we’re going to continue to play aggressively, and we’re going to find guys that can play in the system, and if they can’t play, then they’re going to watch. Pretty simple.

McLellan, on the five-on-three:
Late in the second we created a couple opportunities. We’ve got a guy that’s scored 400 NHL goals with a slapper from the hashmarks. He had two of ‘em and put it over the net. We pay him handsomely to put those in, and he’s got to do that. It was great that we created those opportunities. Coming into the third, I thought we weren’t very sharp on it. At the back end of that power play we did have some chances, but we had the A-unit off and the B-unit on, and they created a little bit more. [Reporter: Does it compound it when that same player who missed the net takes three minor penalties in the game?] It does, because I thought one of them was for himself. You know what? You’ve got to stick up for yourselves sometimes, but we don’t want him in the box, we don’t want guys in the box against the second-ranked power play in the league, obviously. So that’s something we can talk about and we can fix that quickly. That’s not a huge issue. But my biggest concern is how we approached the game with certain individuals. You may have scored 10, 12, 14, 15 goals last year. You think you’re going to 25 and giving up 30? It’s not going to work that way.

McLellan, on whether he foresaw the Sabres’ emergence this year:
Oh, absolutely. You look at some of the moves that they made, I think we have to remember that that team was in first place in December of last year, or pretty close to it. They had a really good team. Something didn’t go right for them. They rebuild the back end, they’ve got some really good forwards, they’re getting good goaltending. It doesn’t surprise me they’re there. They play a pretty fast paced game, and yet I thought we played with ‘em. At times during the game, I thought we were the better team. But that doesn’t get you anything. It’s the 3 and the 0 at the end of the night that really counts.

McLellan, on whether Jonathan Quick will be back in goal on Saturday:
I don’t know. Today’s Thursday. I don’t even know what I’m doing in the morning yet, so ask me that question tomorrow.

Anze Kopitar, on challenge of scoring on Buffalo and Carter Hutton:
Obviously at the start of the third period, you have a 5-on-3 that we didn’t convert on and it’s definitely a catch-up game from there. The first ten minutes of the game put us behind the eight ball and we just couldn’t come back.

Kopitar, on starting poorly despite early territorial advantages:
Credit to them, they’re a good team, but it wasn’t so much what they were doing. We gave up four or five odd-man rushes and they cashed in, so you just can’t expect to give up odd-man rushes and not get scored on.

Kopitar, on what the team can improve on before Saturday:
Play a full 60 minutes. I mean, from the first puck drop to the very last whistle. We have to do that.

Kopitar, on whether he’s encouraged by the number of scoring chances:
I’m more worried about giving up goals like we did today, that’s first and foremost. We put up a good number of shots, but it’s not going to do us any good, it’s just putting up shots. Eventually, we’ve got to score and it’s going to have to be quick.

Kopitar, on Carter Hutton’s performance, and whether anything was missing offensively:
I mean credit to him, 47 shots you’ve definitely got to give him credit, but on the flip side, you’ve got make it harder on him. More bodies there, just hitting the net when we had the chances, we had a couple of chances when we missed the net completely.

Kopitar, on the “long chances” that the team is giving up:
They’re just breakdowns. You’re playing a system where, yeah it’s on the aggressive side of things, but you still have to be responsible defensively. When you’re not, you’re giving up odd-man rushes and what did we give up, four or five in the first period? You can’t expect, with the caliber that they have over there, that they’re not going to score on any of them. That’s obviously on us.

Tyler Toffoli, on what Buffalo did to limit L.A.’s rush chances and the overall challenges offensively:
I mean, no different than any other team. They have d-men that jump up in the rush, but they also do a really good job of getting back. I think, five of the six back there are really, really good skaters, elite skaters, that’s kind of the way the game is now. Everybody’s jumping up in the rush and getting back and having a centerman or an F3 and they’re covering.

Toffoli, on whether tonight’s game was the type of game he wants to play, individually:
Yeah, I mean like I said earlier to Carrlyn, it’s one of those things where I’m really happy with my game, but at the same time you can’t be happy when your team is losing by three goals. I’ve got to find a way to score goals and if I put one of those in, it kind of changes momentum and it could be a different outcome.

Toffoli, on balancing chance generation and structural improvements with the need to win games:
We have our system, but at the same time, if we can make the play and do the right thing as a hockey player, Todd will have absolutely no problem with it if you make the right play. It’s a matter of throwing a puck away, or like Todd says, ‘hoping’ the play in the middle of the ice. If you’re making strong plays in the middle of the ice and it’s there, that’s how you create really good chances, and I think throughout the game we did that tonight. We just didn’t capitalize on our chances.

— With the loss, Los Angeles fell to 46-59-21 all-time against the Buffalo Sabres, a record that includes a home mark of 29-26-9. The Kings fell to the Sabres for the third straight game and the second straight time on home ice in Los Angeles.

— The Kings have not scored a goal in 135:36, spanning three games, dating back to the 7-4 win over Nashville during the home opener.

— The Kings have outshot their opponent in all seven games this season. Tonight’s shot differential of +23 was the largest of the season to date (Previously: +14; 10/9/19 @ VAN).

— Austin Wagner logged 6:29 of ice time, his lowest total since March 2 vs. Chicago last season (4:31) and the seventh lowest total of his NHL career.