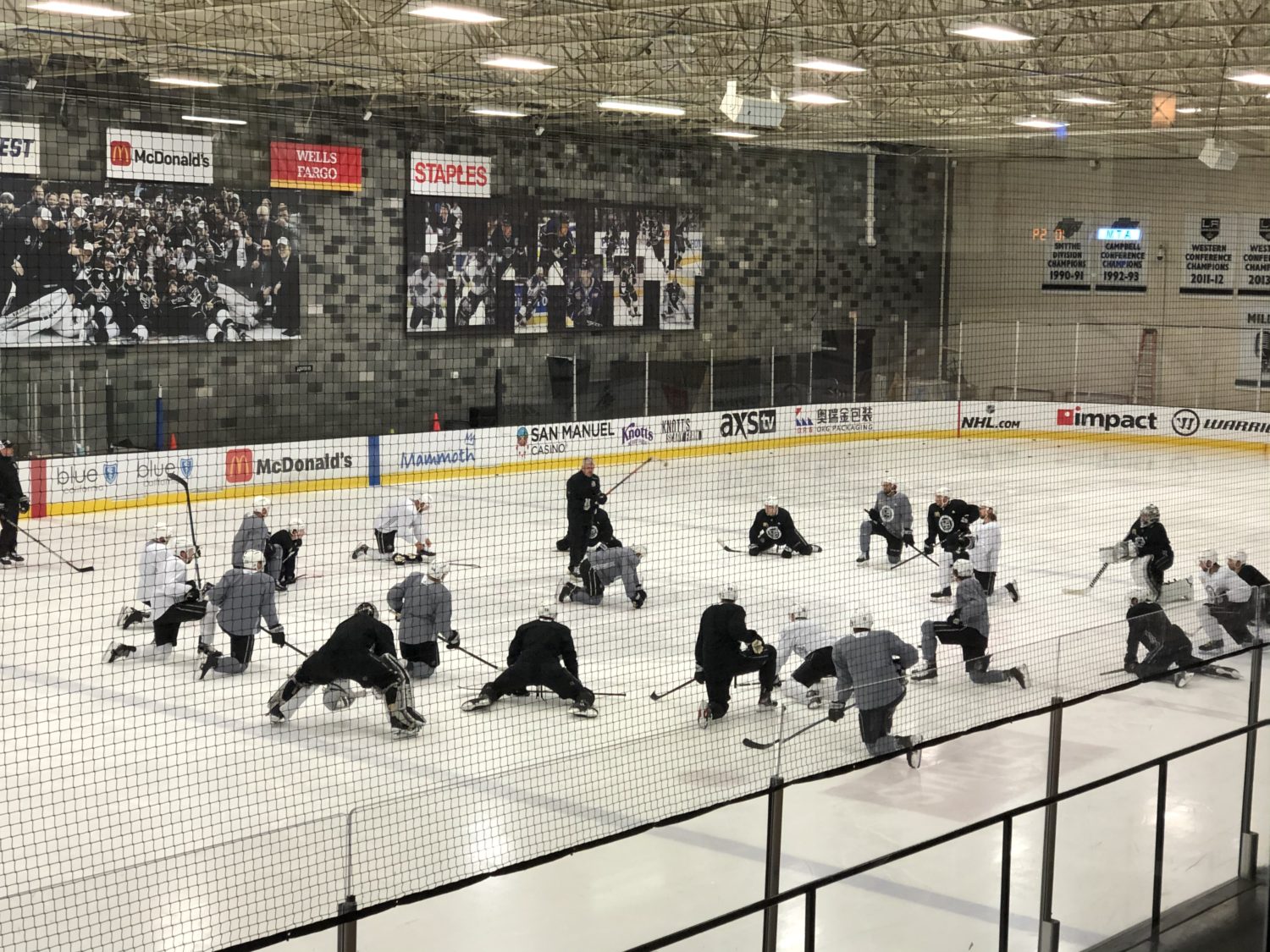 The Kings skated at 11:00 a.m. on the TSPC ice, but before Todd McLellan’s whistle sounded the start of practice, the second power play unit got some work in. Alec Martinez, Tyler Toffoli, Ilya Kovalchuk, Michael Amadio and Jeff Carter practiced breakouts and in-zone set-up, even as they’ve generated some good looks as of late.

“Being able to enter the zone off the breakout is huge, and then winning that first faceoff and gaining possession [will also help us],” Michael Amadio said. “We just want to be shooting on the power play right now, getting pucks to the net and then recovering them, obviously, and if you get them running around a little bit, that’s when seams start to open up.”

The man advantage, 2-for-21 to start the season, ranks 27th with a 9.5% success rate. But raw power play numbers don’t often tell the story and may need qualifiers such as the game situation, the personnel on the ice, the type of penalty kill they’re facing, et cetera. And the second unit has been effective, with the five players who took the ice this morning ranking in the top five in terms of on-ice chance generation metrics and expected goals-for during 5×4 play.

On Tuesday, Carolina found success with a highly aggressive penalty kill that was able to disrupt decisionmaking before, well, those decisions were made. There was an overall wet blanket on the game, which wasn’t as much the fault of Los Angeles as it was “due in part to how well they played,” according to McLellan, who liked the earlier momentum on the man advantage but thought it got “impatient.”

“The power play has been streaky when it comes to offense – some really good Grade-A chances that haven’t gone in, and then when we really need it, it went dry,” he said. “But, overall, the offensive driving opportunities are there. We’ve just got to polish up the finish a little bit.”

— At five-on-five, meanwhile, the Kings are offering some indicators that McLellan’s forecheck has taken root. When teams are forechecking effectively, they’ll play in the offensive zone more often, a trend that will be reflected in their shot metrics. And while shot and possession metrics aren’t particularly revealing some two weeks into the season, it’s better to evaluate from the Kings’ perch than from the inverse. According to Natural Stat Trick, they rank sixth in raw Corsi-for, second in Fenwick-for, second in shots-for percentage, third in expected goals percentage and sixth in high-danger chance percentage.

“We’re beginning to see patterns develop with our team,” McLellan said. “There are certain ways that the chances are coming more often than not, and we like that. Our starts have been good. We haven’t been a slow-starting team, which is nice. We haven’t been able to sustain it, but again, there’s a team that’s always wearing the opposite color that gets in the way sometimes, and they push back. But the chances have gone up. A lot of them are good five-on-five chances, which is hard to generate offense.”

The gulf between their 56.1 xGF% and 48.6 actual GF% is influenced by their league-worst .864 five-on-five save percentage. Though two points will remain paramount, it was encouraging that the team largely played well structurally and positionally on Tuesday on a night they received their first standout goaltending performance of the season.

But even as the Hurricanes executed their own aggressive systems well, there were still moments in which the Kings repeatedly forced the visitors to loft pucks into the neutral zone to calm plays down and escape danger. And Carolina did the same to the Kings during a low-event second period.

“You’ve seen in years past some of the really successful forechecking teams, yeah, you’re trying to be physical and eliminate the man from the puck, but your stick can do a lot of the disrupting while your body’s doing the physical aspect of it,” Alec Martinez said. “I think we’ve taken a little more precedent on that, and the forwards have done a really good job. And then I think having the D come down the wall, I remember when we played against teams that forechecked that way, often it seems like you always have someone over top of your option, and that forces a lot of punts and a lot of high-flicks, or at least just plays on the wall that we have an opportunity to keep in.”

The added support provides additional barriers between the opponent’s goal line and their own.

“I think our overall system in general is more aggressive than what we’ve played in years past, and I think that’s kind of generated more opportunities offensively. I think especially the way we forecheck and sending the Ds down the wall, just having multiple layers for the other team’s breakout to beat,” Martinez said. “There’s just multiple layers of the forecheck, and we’ve been able to generate more turnovers and just create more zone time, and obviously, inherently, when you have more zone time you’re going to have more opportunity.”

With the forecheck activated and a forward hounding the opposition’s advancement, the second forward reads off the first player into the zone while the third forward remains higher and in a more defensive position, as Amadio described it.

“I think we’re just getting on our forecheck a little bit better because it’s more aggressive, so we have one or two guys going all the time,” said Amadio, who leads Kings forwards in on-ice chance percentage. “I think just jumping that next play and getting everything to the net and then recovering those shots from the net is generating a lot of scoring chances for us.”

Scoring chances, both for and against, factor principally into coaches’ evaluative tools.

“When we view a game, I watch go the chances for and against right off the bat, because if you take a game, 60 minutes, there’s probably 18 minutes of pure chance, mistake or well-done situation throughout the night. And then the other 42 minutes, sometimes it’s just ping pong and it’s beating up and it’s a neutral moment during the game where you don’t really even need to talk about it,” McLellan said.

— Speaking of scoring chances, Jeff Carter has done a good job of being involved in them recently. The next step will be for the 34-year-old stuck on one assist to cash in. “Many more opportunities and chances. He seems to be more engaged in the games,” McLellan said. “Now, he was that during camp, and it kind of fell off a little bit the first few games. It could be different linemates. Maybe he’s just beginning to feel a little more comfortable. He’s playing a position that he hasn’t played before, and sometimes that’s energizing, too. You’ve got to think a little bit more of where you’re going and what you’re doing. So, things are good for him. He needs to get rewarded, though, at some point, so he continues to believe what he’s doing is the right thing.”

— McLellan’s system and the pace needed to sustain it requires appropriate conditioning, so he described a two-pronged thrust of such training. There’s the physical part, which helps players keep themselves at the raised pace, and the mental part, which keeps players from letting themselves off the hook by taking extra rest.

“If players are able to adapt and change their game to fit our structure, then great. And if they’re not, then they’re going to probably get left behind somewhere, which is unfortunate because we’ve got a good group of guys here,” he said. “So, we need to keep pushing and see if players will evolve in November and December. See if they can maintain the pace and play that way.”

— And, finally, is there value for Tobias Bjornfot to remain on the roster, even if he’s missed three consecutive games? “I believe there is or he wouldn’t be here,” McLellan said. “In the last six or seven days, he’s missed three games. During that time, I don’t even know if the American League played one. He’s missed games here, but he hasn’t missed anything down there. So being around the group, picking things up in practice, being in meetings, experiencing buildings and warm-ups and pre-game meetings and all that type of stuff in the NHL is valuable, and that’s part of the growth process. He obviously needs to play and he needs to get reps in, but that’ll happen.” 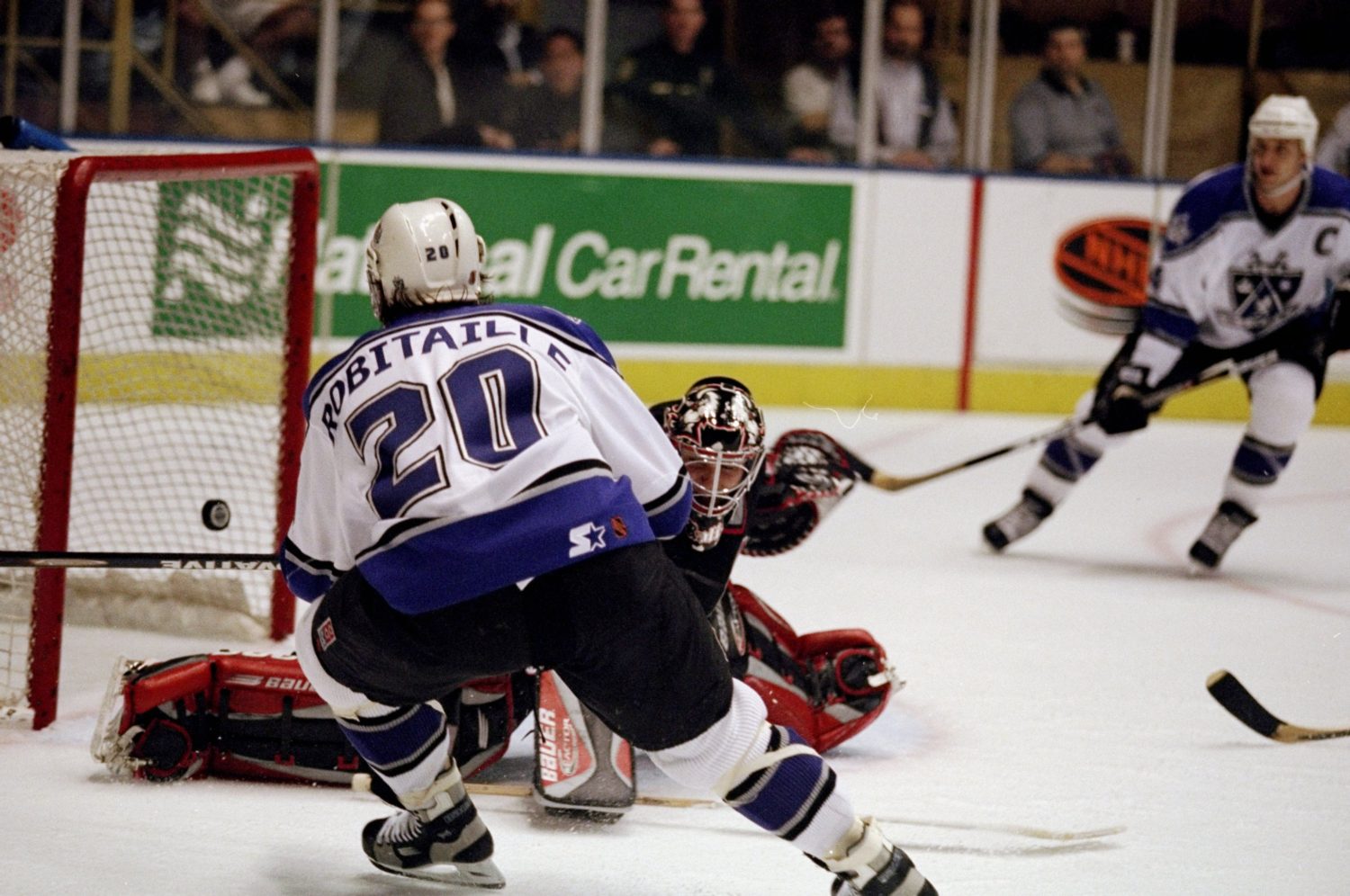