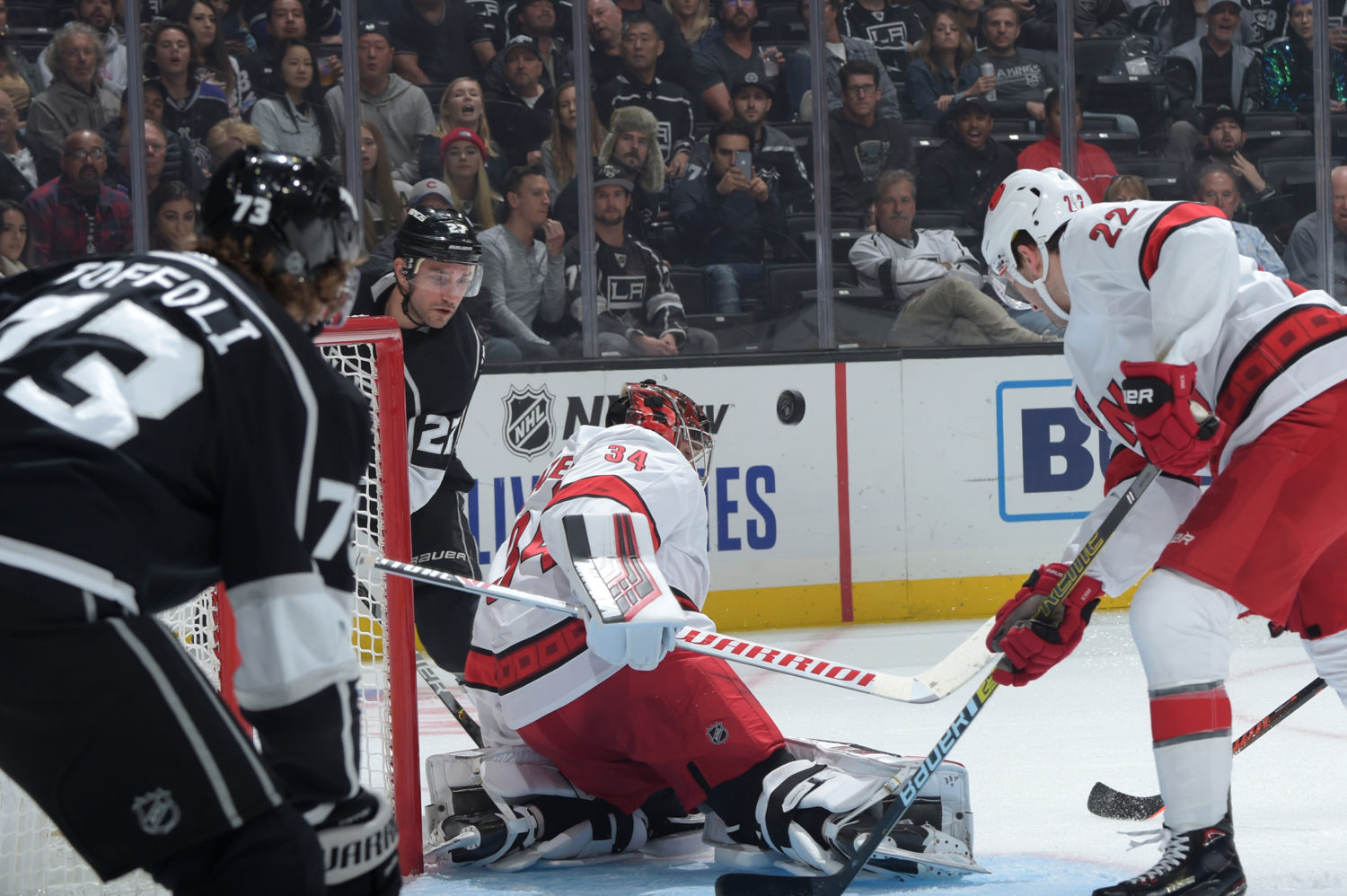 Todd McLellan, on Drew Doughty’s status:
He’s getting looked at. Apparently, he feels pretty good, so that’s a good sign and that’s all I have for you right now.

McLellan, on whether he thought it was encouraging to play well despite the loss:
Yep, I do. When I look a t that game, obviously we’re disappointed in the result. Let me make that really clear. But when I look at the game, I thought it was very tightly contested. A battle for every inch, there wasn’t a lot of space to make plays either way. I’m sure their team’s probably saying that about the Kings. They capitalized on one of our mistakes, we failed to do that on a couple of theirs, but I thought it was a very evenly played game, and that’s a team that went to I believe the final four last year, so they’re a hard team to play against. They give you absolutely nothing as far as space goes. The penalty kill improved, we got some really good goaltending, the power play’s a little bit iffy, so we’re chasing parts of our game right now that we have to continue to work on, but I wasn’t really disappointed in the effort or the will to get things done. Some of the execution wasn’t good, but we have to give the other team credit for getting in the way sometimes, too. They do that.

McLellan, on Adrian Kempe taking a puck to the face:
Yeah, he got hit in the mouth and was gone for quite a while for stitches and he came back in the last minute, basically. So, he missed well over a third of the game. [Reporter: But before that, not a lot of even strength ice time through two.] No. Rhythm of the game, penalties, we had a couple early, he plays on the power play, so he got his time there. Then we took some penalties and the rhythm of the game didn’t allow him to, and quite frankly, he’s got to be way more productive than he’s been. I can try to justify his minutes and lack of, but he dictates how much he gets on the ice and at this point, I thought we would get a lot more from him.

McLellan, on whether he’ll distribute ice time based on a “meritocracy”:
I think every coach is trying to do that. There are situations you’ve got to mold a little bit more than others for different reasons. There’s the business part, the cap part, there’s asset value and asset management. With some of the younger players, and we’re going to grow in the future with them, they’ve got to do things right – as do the older players. But those players that are going forward with us – I think of Kempe as one of them – he’s so valuable to our organization and we need a lot more from him right now, and it’s as simple as that. I’ve said all along these players dictate how many minutes they get. I don’t really, or the coaching staff doesn’t. Their output dictates it. I was telling some of the centers on the bench – you want more ice time? Win a draw. We’ll put you out every time. And you happen to not get off for 30 seconds, here’s 30 more. Do that three times a night, and all of a sudden you’ve got a minute and a half more. But there are areas of the game they can specialize in, and they’ll never come off. In my opinion, Blake Lizotte’s doing some of those things. He’s drawing penalties, he’s creating turnovers. Might not be on the scoresheet every night, but he has an impact on the game positively, and he gets rewarded for ice time.

McLellan, on improvements to the penalty kill:
Well, we walked through some things in the morning, so just the fact that we made some adjustments and talked abut situations, we played them much better. I thought our penalty kill forecheck and our stand-and-sort out at the blue was very effective. We won a couple draws that we were able to get clears on. The 50/50 pucks that were laying there, they were at least contested. The other night we weren’t jumping on them at all, we were just happy to play in a penalty kill system. All of those things came up big. Soupy made a save or two that was fantastic when we needed it, so those were positives. We didn’t even practice, we walked through them this morning and we got better. The power play, we’ve got to clean some things up there now, but we’re chasing parts of our game, and usually that means you’re not good enough right now, and we’ll continue to work on them.

McLellan, on what can be adjusted on the power play:
It depends on night-to-night. The other night, the finish part. When you look at the opportunities we had against … Vegas, the opportunities that we created early – wide open nets and we didn’t finish. So the finish part, that night. Tonight, we played a team that pressured differently and we didn’t handle it well. Our support was too far away, we didn’t make clean plays, we didn’t get shots through to the goaltender, they were fronted. So just the execution and quickness of it in tonight’s game. There’s the breakouts, the entries, faceoffs, retrievals, screens. There are so many things that go into a power play that we have to clean up. We’ll get at it.

Alec Martinez, on any encouraging feeling hanging with a top standings team:
No, you need results. We lost the game.

Martinez, on what Carolina did well to limit Los Angeles offensively:
In all areas of the ice or the game, I thought they did a good job of swarming us. They’re in hot pursuit on the puck, and I don’t think that we were quick enough with our decision-making and playmaking toiday. I thought we did a little better job in the third, but they’re a good hockey club. They really get on you, they get on you quickly, and I think that was the difference maker.

Jack Campbell, on improvements:
Our PK was excellent. Guys were sacrificing, and we had a meeting today about it, and guys didn’t blink an eye. They just went right out and executed, and that’s what we need. They did a great job all night.

Campbell, on good rebound control despite the loss:
Obviously I just want to get better every day, and that’s an area I haven’t been my bestat, so I just tried coming into this game knowing they’re a high-volume shot team, trying to eliminate as many second chances as I could, and I thought our guys in front of me did a great job. They just needed one more save.

Alex Iafallo, on what Carolina did well to limit Los Angeles offensively:
They took away a lot of options for us. We were starting to get the hang of it at the end in the third. We’ve got to play a full 60, every zone. You’ve got to give it to them – they had a good forecheck. We’ve got to beat that right off the bat.

Iafallo, on whether Los Angeles limited Carolina’s speed well:
Yeah, for sure. We shut down most of their opportunities. They had a couple good shots, but so did we. At the end of the day, we’ve just got to finish our chances and keep going for all 60.

Iafallo, on whether the team improved despite the loss:
A couple mishaps, but at the same time, we’re getting the systems and structures down. We want to win those games and we have to start winning those games, but if we clean up a few things and keep playing our structure, we’ll be fine.

— With the loss, Los Angeles fell to 38-32-10 all-time against the Carolina franchise, a record that includes a home mark of 24-13-3. The Kings lost a home game to the Hurricanes for only the second time since the 2005-06 season, falling to 7-2-0 in their last nine. Carolina earned a shutout in the series for the first time since a scoreless tie on March 15, 2003, and did so in Los Angeles for the first time since a 9-0 Hartford win on November 27, 1985. These teams have one game remaining: January 11 at PNC Arena.

— With the loss, the Kings fell to 0-1-0 against the Eastern Conference and Metropolitan Division, 0-1 in one-goal games, 1-4-0 when their opponent scores first, 0-1-0 when tied after one period, 0-3-0 when trailing after two periods and 2-4-0 when outshooting their opponent.

— The first period was the first scoreless period out of the first 16 periods Los Angeles played in this season.

— Adrian Kempe logged 9:10 of ice time, his lowest total since suffering a lower-body injury and logging 3:37 against Colorado on November 21, 2018.