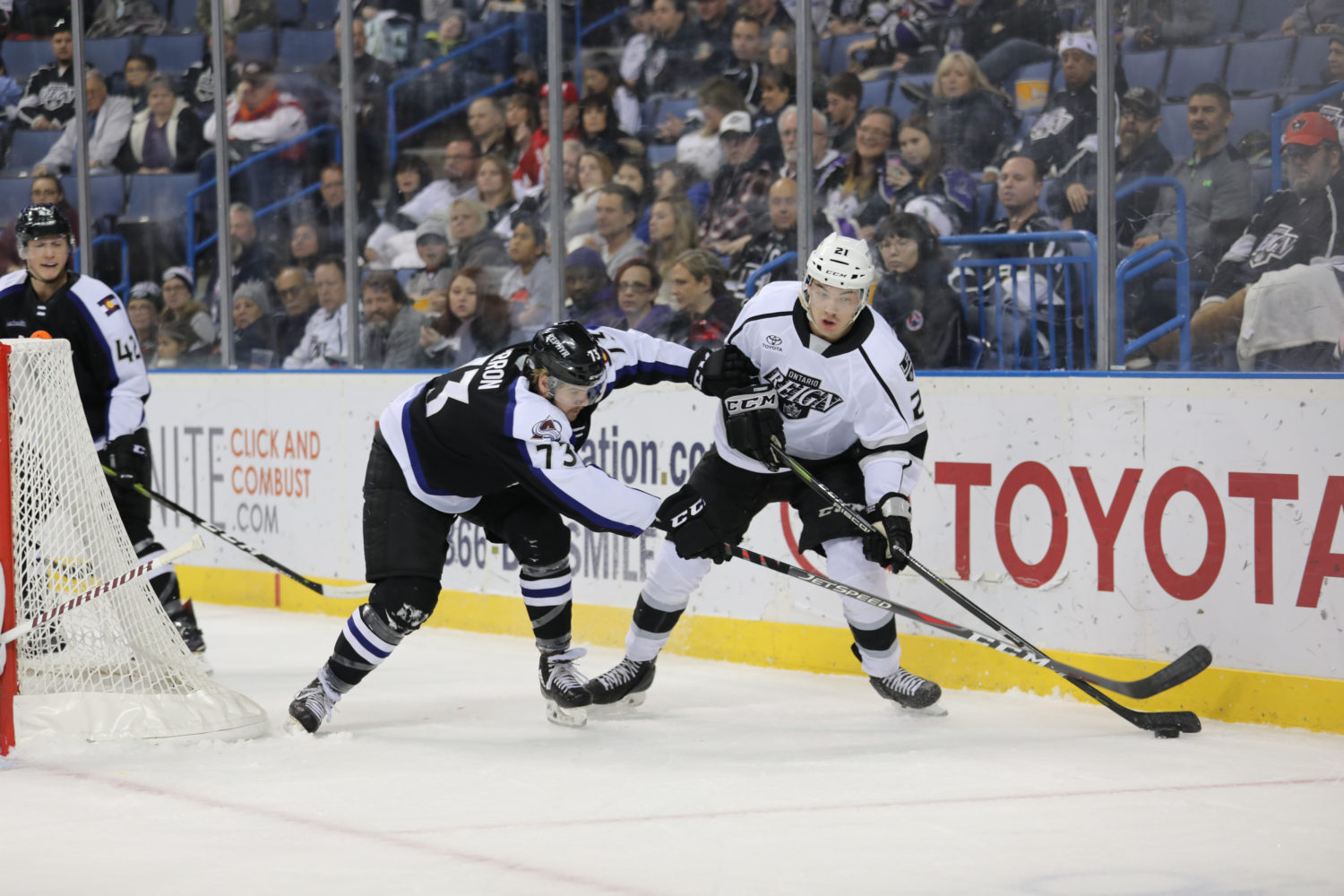 TONIGHT’S MATCHUP: The Ontario Reign are back in action for Week 2 after a pair of victories in Week 1. The Reign host the Colorado Eagles this evening, the first in a back-to-back set that also includes the Tucson Roadrunners on home ice tomorrow evening.

WHAT TO WATCH FOR: The Reign are expected to hit the ice tonight with a similar alignment to Saturday in Bakersfield, with the exception of defenseman Chaz Reddekopp, who is expected to make his season debut in place of the injured Daniel Brickley. This morning’s skate showed Markus Phillips, Jacob Doty and Brad Morrison on late for extra work, with goaltender Matthew Villalta also on late, pointing towards a third consecutive start for Cal Petersen.

GO SEE CAL: Petersen had himself quite the weekend, as he stopped 83-of-85 shots en route to being named as the AHL’s Player of the Week for the week ending October 6. Petersen posted a 2-0-0 record, a 0.96 goals against average and a .976 save percentage, along with one shutout, across the two victories. Petersen leads all AHL netminders in each of the above categories, amongst goaltenders that have played in two games this season.

SUPER MARIO: Ontario forward Mario Kempe was the overtime hero on Saturday in Bakersfield, as he found the back of the net with just 27 seconds remaining, his second tally of the evening. Through one weekend of play, Kempe leads all players in the AHL in goals (3) and is tied for the league lead in points (4). The veteran forward was also named as a Reign assistant captain last week, alongside Lance Bouma and Ryan Stanton.

FRKBALL: Reign forward Martin Frk found the back of the net on Saturday, his birthday, as he opened the scoring in Bakersfield on his team’s first shot. Frk has scored in each of Ontario’s opening two games, joining Kempe as Reign players with goals in both games to open the season. Frk brings a goal-scoring pedigree to Ontario, having scored 27 goals in back-to-back seasons with Grand Rapids in 2015-16 and 2016-17, his last two campaigns with 60+ games played in the AHL.

ON THE PLUS SIDE: Ontario defenseman Kale Clague was one of seven players in the AHL to post a +4 rating on Opening Weekend, as the second-year blueliner is tied for the league high through two games. Clague was +2 in each of Ontario’s two victories and is joined by former Reign defenseman Vincent LoVerde. Clague tallied an assist on Saturday, the primary helper on Kempe’s overtime goal.

INJURY UPDATES: The Reign will be without defenseman Sean Durzi, who will miss this weekend’s action with an upper-body injury, suffered on Opening Night against San Jose. Durzi missed Ontario’s win in Bakersfield on Saturday. The Reign will also miss defenseman Daniel Brickley, who is out tonight with an upper-body injury. Forward Drake Rymsha also remains sidelined with an injury suffered in preseason.

SCOUTING THE EAGLES: Ontario posted a 2-1-1 record against Colorado last season on home ice, including wins in their final two meetings to close out the year. The Eagles are led offensively, entering tonight’s action, by forward Michael Joly, who scored in both Colorado games against Stockton last weekend. Colorado went 0-2-0 against the Heat on home ice, including a 4-2 loss on Saturday despite multi-point games from Calle Rosen (1-1-2) and T.J. Tynan (0-2-2).