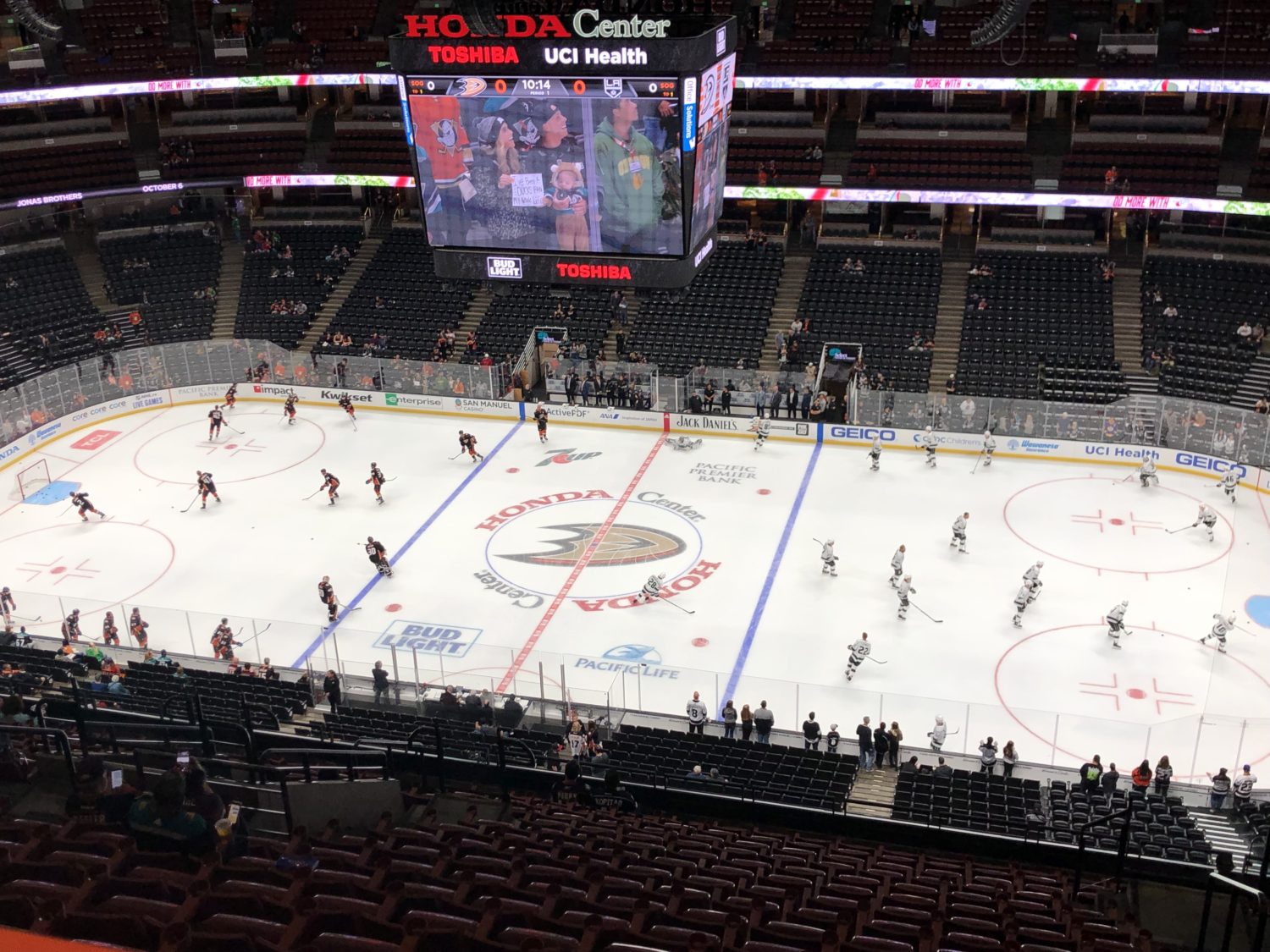 Third Period
20:00 – One-goal game.
14:09 – PENALTY ANA. Poor puck management leads to an A-grade Lewis chance in front (denied by Miller) and a Fowler hook.
12:08 – Fine PP exchanges before Kempe tries to catch Miller sliding to his left and unleashes a wrister across the grain. Miller save, no rebound.
11:10 – Terry with a skilled, sharp-angle net drive. There was an option to his left that would have required a saucer pass, but he ran out of room when attempting to stickhandle his way from the right wing into a more dangerous spot.
4:03 – PENALTY ANA. Guhle for high-sticking.
3:26 – PENALTY LAK. Kempe cross-checks Rowney in the back shortly before Grundstrom lifts a loose puck into an open net. No goal.
1:12 – EMPTY NET GOAL ANA. 0-2. Carrick flips it into an open net. The Ducks Goal Guy also paints his face in the preseason.
0:16 – Wagner, Grundstrom with late point blank chances.
0:00 – Kings shut out Monday, Ducks shut out Wednesday.

Second Period
20:00 – Playin’ hockey.
18:46 – PENALTY LAK. Grundstrom gets a little frisky trying to leverage a battle to set up a 2-on-1. Holding.
16:46 – Excellent succession of Quick saves on Carrick, Getzlaf and Grant.
15:20 – Anaheim zone time.
13:10 – Kovalchuk neutral zone turnover. Chose passed back across the red line rather than snap a puck deep. Always looks easier from up here, as they say.
12:57 – Excellent Quick save on Carrick, who elected to shoot on a 2-on-1.
9:39 – Grundstrom stops up in the offensive zone and needles a good pass onto Wagner’s blade, but Sherwood backchecks it off his stick without taking a minor penalty. Good defensive play. Kings making a few plays, though most of the action has been in their zone.
8:33 – Prokhorkin drove behind the net before issuing a no-look backhanded pass to the top of the crease, where Wagner’s put-back was denied by Miller. Miller closes the door on subsequent rebounds.
7:10 – Good Lizotte backcheck. Covering the center of the ice well.
6:05 – Amadio intercepts an outlet, strides to the top of the right circle and unleashes a wristshot that Miller knocks down with his chest. Good job by Amadio to follow his shot and retrieve the loose puck.
4:13 – PENALTY LAK. Lizotte for tripping. Gets his stick on Lundestrom, who goes down to draw the call.
2:10 – Great play by Anderson-Dolan, who strips Henrique, starts play in the other direction and unleashes a hard, low wrister from the top of the right circle that Miller kicked aside.
0:13 – PENALTY ANA. Fowler buries a loose puck into an open net after Ritchie levels Quick. No goal, and an Anaheim minor.
0:00 – More PP to come.

First Period
20:00 – Six more periods. Plus an overtime or a shootout, perhaps. Lez Go.
19:20 – Diagonal feed from Kovalchuk to Kupari, who reaches and redirects it just wide of Miller.
18:40 – Good Prokhorkin forecheck keeps the puck in the offensive zone.
18:20 – ANAHEIM GOAL. 0-1. Henrique buries the rebound of a Larsson shot that Ritchie, who had barreled to the front of the net, had appeared to get a piece of.
15:35 – LaDue goes down to block a Comtois shot, disrupting a high-grade chance from the slot.
14:42 – Del Zotto keeps Lewis wide on a two-on-one and blocks his centering pass towards Lizotte.
10:15 – LaDue denies a centering pass. Good coverage.
9:59 – Quick knocks down a Fowler shot from distance. Heavy Anaheim pressure.
9:02 – Getzlaf-to-Carrick one-timer, Quick save. If this is his last game until opening night, he’s seeing enough pucks to tide him over.
7:44 – PENALTY ANA. Lindholm for interference.
4:50 – Wagner misses wide, short-side, on a contested, angled 1-on-1 rush. Miller didn’t give him much.
4:03 – Outstanding Quick save on a Rakell rebound. Rakell can’t believe it. BUT…
4:03 – PENALTY LAK. A. Kempe for hooking.
2:41 – PENALTY ANA. Ritchie for hooking.
2:30 – Getzlaf two-on-one. Behind-the-back pass to Comtois, who grips it and gets off a shot, but Quick makes another fine save sliding to his right.
2:15 – Prokhorkin loses a handle and attempts to stuff it past Miller but is denied.
1:55 – Prokhorkin, on a mini-break, is again rebuffed by Miller. Prokhorkin has been active this period in a good way but also lost a faceoff leading to ANA’s goal.
0:00 – BREAK.