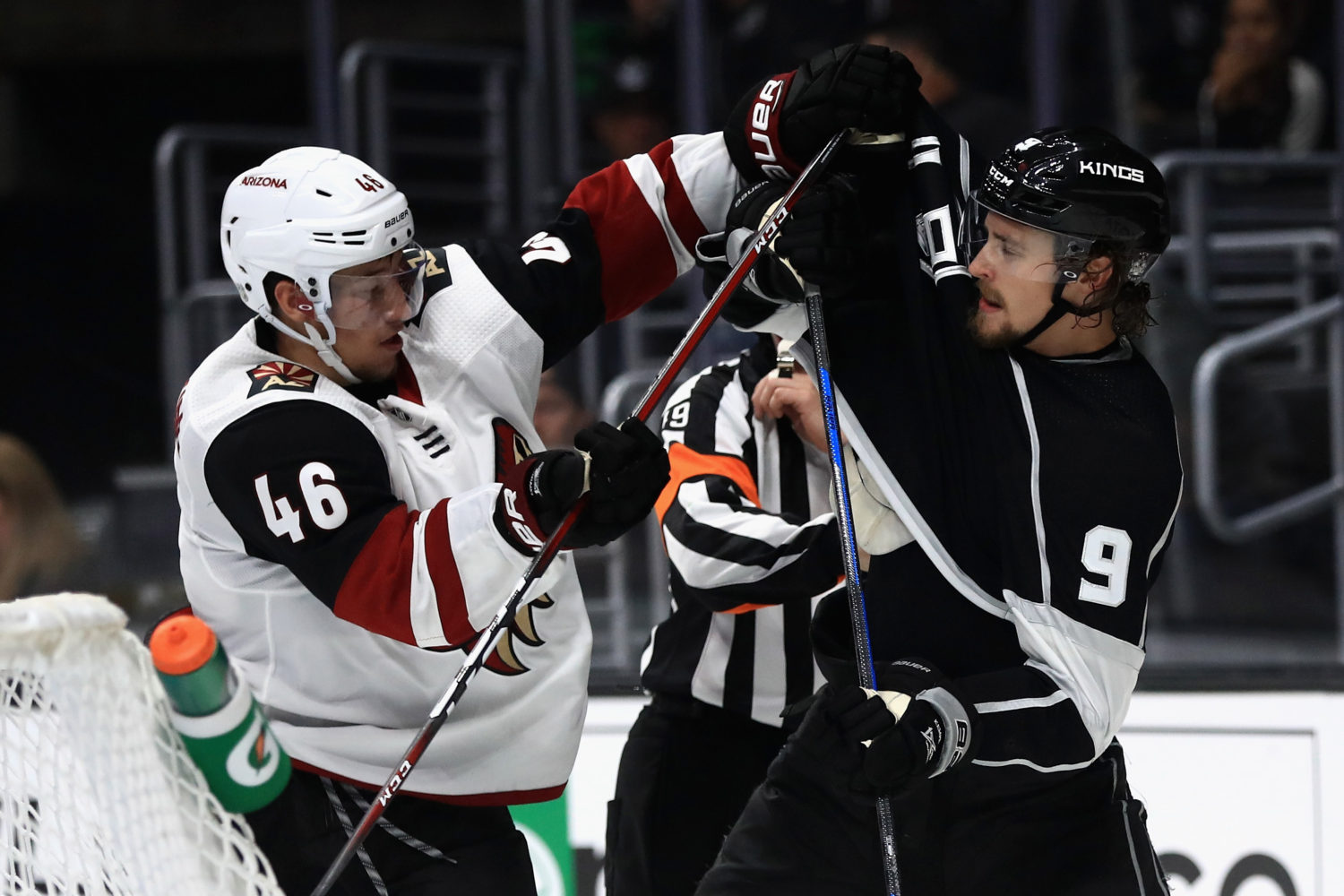 THIRD PERIOD
20:00 – Third period is underway. Enter Adin Hill in net for the Coyotes. Kuemper finishes 16-of-16 through 40 minutes of work.
18:13 – Best shift of the game from the 28-74-64 line. Worked the puck in well below the goal line, chances for Anderson-Dolan and Luff, though not Grade A per say.
16:20 – ARI Goal – Quick shot from defenseman Jordan Gross in the low slot, Petersen gets a piece of it, but it squeaks through. Coyotes lead 4-0.
13:14 – ARI Goal – Might be an own goal….shot from the point takes a nasty deflection past Petersen, who was expecting it to go the other way. 5-0 Arizona.
12:17 – Trying something new…..Carter – Kempe – Kovalchuk for a shift midway through the third.
10:27 – Garland/Keller combination nearly makes it six, but Petersen just able to squeeze the pads together in time, with a little help from Ryan and Spence clearing the crease.
8:55 – ARI Penalty – Hooking call against Demers, who was working on Durzi in the corner, earning the call. Kings get their fourth man advantage look of the night as they aim to get on the board.
8:22 – Cleanest zone-entry on the night from LAK on the PP, looks just liked they drew it up in practice, resulted in a Kovalchuk shot, a rebound and a double save from Hill.
5:31 – Carter digs the puck off the boards, protects it into the circle and fires on net, into Hill’s chest. Kings have had a handful of good chances, but seems like most looks have been in the chest area of the goaltender.
5:05 – Kempe shows off his speed, as he drives wide and cuts to the front of the net, but Hill gets a stick on it. Carter’s rebound effort hits the side netting.
0:00 – FINAL – Kings drop this one 5-0, fall 6-4 on aggregate over the two games.

SECOND PERIOD
20:00 – Coyotes take the opening faceoff of the middle stanza and we’re back at it for the second.
18:53 – Fischer drives around Spence, cuts towards the front of the net and rings his shot, it off the post and out. Nice power move.
16:55 – “Fourth” line creates another chance. Kaliyev’s wraparound is knocked away, Rempal retrieves the puck and is denied from a sharp angle. Kuemper has been solid through 23+.
15:44 – ARI Goal – One of those, there’s no replays and I was trying to correct the incorrect link I posted on Twitter, goals. 3-0 Coyotes either way, Dvorak on the goal.
15:27 – LAK Penalty – Durzi for tripping, race back for a puck on what could have been an icing, Durzi got tangled with an Arizona player and brought him down into the boards.
13:27 – Kings get the kill, though Arizona had puck control for nearly the entire final 60 seconds. Couple good saves from Quick.
7:45 – Cal Petersen enters the game for Jonathan Quick – Quick finishes with seven saves on 10 shots in his preseason debut.
5:27 – LAK Penalty – Clifford sits for high sticking, followed by a media timeout. Coyotes will have a man advantage on the scraped ice, call the conspiracy theorists.
4:18 – Rasmus Kupari getting time in all situations, out here on the PK alongside Kempe. He and Rempal have connected well at even strength, good showing from 89 so far.
3:40 – Good work from Kempe, to weave into the attacking end and hold long enough to get support. Puck eventually finds the trailer, Rempal, who is turned aside by the blocker of Kuemper from a good area.
1:59 – LAK Penalty – Brickley sits for tripping. Put into an awkward position at the blueline, Brickley takes the hook to prevent an odd-man rush the other way.
1:25 – The Cornell man! What a stick from Ryan, who denies an Arizona bid on a gaping net, after a Petersen save. Easily prevented a goal.
1:10 – ARI Penalty – 4-on-4 hockey as Soderberg sits for Arizona.
0:00 – A tidy seven saves in seven minutes for Petersen since he entered. 3-0 Coyotes through 40 minutes of play.

FIRST PERIOD
20:00 – Underway in LA!
19:42 – ARI Goal – Coyotes get a 3-on-1 rush inside the game’s first 20 seconds. Keller keeps it himself, looks off Quick and scores blocker side. Kings with an early deficit.
16:45 – Nice moves from Lewis, weaves through the defense but his shot is blockered aside by Kuemper from the high slot.
16:15 – ARI Penalty – Ilya Lyubushik sits for slashing, LAK to its first PP of the evening. Kemper-Carter-Toffoli-Kovalchuk-Bjornfot
14:08 – Kings not able to generate much on the man advantage. Second unit consisted of Clifford-Prokhorkin-Kupari-Luff-Durzi.
12:50 – Good chance for Kovalchuk – Toffoli slides around a defenseman down the right wing, flings to the center. Kovalchuk collects, spins and fires, saved by Kuemper. Nice effort by #17 to corral it.
10:13 – Keller & Garland combine on a chance down the left wing. Keller curls off after attacking hard, slips a backhanded feed to a trailing Garland, whose shot is gobbled up by Quick at the top of his crease.
7:01 – Good work in transition from Rempal and Kupari springs Kaliyev for an open look in the left-hand circle, but Kuemper swallows the shot at the top of his crease. Rempal has looked threatening early on.
6:38 – ARI Penalty – Fischer sits for interference, Kings get another shot on the PP in the opening period.
5:15 – What a look by Kovalchuk….threads the needle through two penalty killers, but Kupari’s back-door pass is deflected away. Best opportunity yet for LAK on the power play, as they fall to 0-for-2.
3:38 – ARI Goal – Looked like Conor Garland from the right wing as the visitors double their advantage. Goal came off the rush, Garland took a cross-ice feed from Schnarr and finished low blocker side. 0:50 – Great shift from Rempal. Worked a nice passing play with Kupari, set up a second chance from the point and then went hard on the forecheck to create a turnover and prevent ARI from clearing the zone. Liked his game a lot in the opening 20.
0:00 – 2-0 Coyotes through 20 minutes.

PRE-GAME
Jeff Carter, Trevor Lewis & Tyler Toffoli have an “A” for tonight’s game.

See here for notes from morning skate and here for quotes from Head Coach Todd McLellan from earlier today.