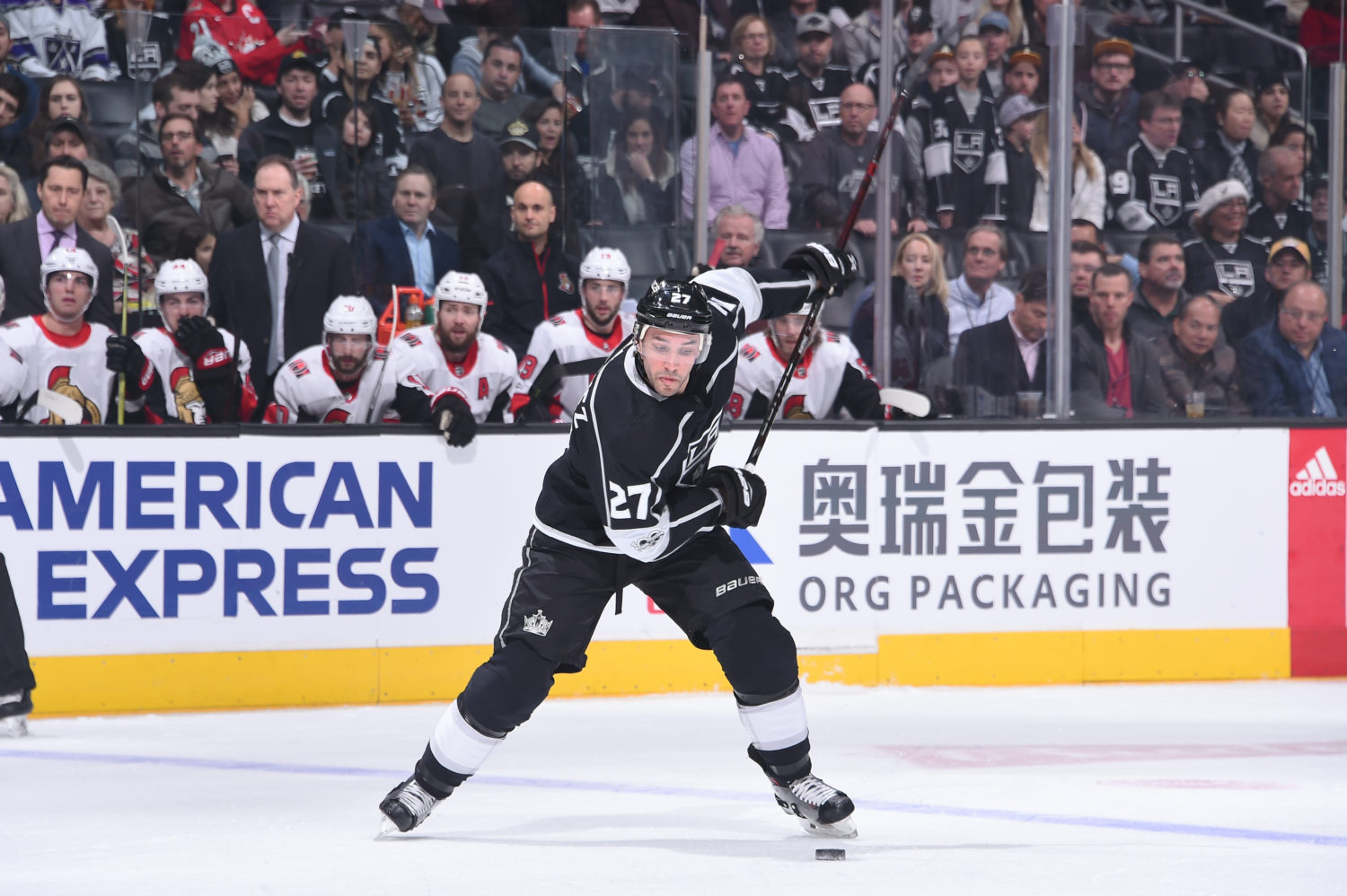 While he was of several members of the Kings organization ready to move forward after last season, Alec Martinez wasn’t ready to simply put what happened entirely in the rear-view mirror. The Michigan native took an intuitive approach to how he looks at the situation for himself and his teammates last season, noting that while intricate details are not worth stewing over, the entirety of what happened shouldn’t simply be forgotten.

“I think that you can’t necessarily flush it, because you’ve got to learn from it,” Martinez said following this morning’s camp practice. “Obviously it’s a good kick in our rears, I’m going to say it P.C. I think that it’s important to learn from and it’s definitely knocked us down to size, so it’s important to remember that. As far as details and specifics, I’d say yeah, you flush it, we have a new opportunity here, a new year, a new coach and we’re starting back from square one.”

Learning from your mistakes is not a new concept, but it was interesting to see how a player like Martinez approached it. The 32-year-old defenseman, like many of his teammates, has had a lot of success in the National Hockey League – Last season was a new experience for several members of the Kings, who had not experienced a losing campaign like the one that they endured. As Martinez noted, it’s important to remember certain things about the bigger picture of last season to learn from what happened as the group proceeds forward. The veteran blueliner believes that everyone in the room, young and old, is looking to continue to improve, regardless of the stage of their career.

“I know that I can speak on behalf of everyone, everyone still wants to learn, especially when we’re changing a system like that and things are going to come up on our end too,” he said. “We’re going to have questions and we don’t have all the answers, they don’t have all the answers, that’s why we’re a team and we’ve got to work through it together.”

The Kings are learning new systems and structures under Head Coach Todd McLellan and that has started with practices, specifically the pace. It only takes a few minutes of watching a practice through the first two days of training camp to pick up on the vast differences in the speed and tempo during drills. There is no standing around, not even always moving in between drills and when there is, it was accompanied by a hard lap around the ice to keep the energy levels high. How does the Kings’ new bench boss define “up-tempo?”

“I want to be direct,” McLellan said. “I would like us to be very clear as a coaching staff of what we require of them, what their responsibilities are in certain areas, and then most importantly, why we’re doing it. I continue to try to get that point across – if they understand why they have a better chance at success. I don’t believe in wasting a lot of time at the boards or moving from corner-to-corner, or just loafing around. Let’s go. And what we used to get done – and I’m not insinuating this team – but what hockey used to get done in 60 minutes you can almost get done in 40 minutes now. Keep the pace up, keep the heart rate up, you don’t have to line guys at the end of practice all the time and skate them.”

Martinez also spoke about the influx of youth in camp this season, specifically on the blueline. From their time in the NHL last season, Martinez knows about what Sean Walker, Matt Roy and Daniel Brickley can bring to the equation, and remembers being in their shoes earlier in his career. Now the veteran, Martinez recalled what he learned from past Kings veterans like Matt Greene, Willie Mitchell and Rob Scuderi as he himself was looking to establish his game as a full-time NHL player. While Martinez noted that part of his job will be “trying to take guys under my wing,” he also had a little chuckle when asked specifically at one he mentioned as a mentor for him in Scuderi, who now works as a Skill Development coach with the Nashville Predators.

“A skill development coach. … I have texted him about that and we’ve had some funny conversations,” he said with a smile. “One-timers, toe drags, cutbacks – his game basically. … I obviously have the utmost respect for that guy. He played for a long time and was obviously very successful, won multiple cups. I know that we laugh about that, but he was very underrated skill-wise. Everyone talks about his defensive prowess, he probably has one of the best defending sticks I’ve ever seen. But he can make plays.”

On if he’s had the chance to speak with Trent Yawney
Yeah – I stay here in LA in the summer time, so some of the staff has been in and out for development camp and things like that. Since cell phones exist, you can converse with people, even when they’re not here, which is pretty cool. Obviously, I think that he’ll be really good for our backend as well. Again, he’s tough but I think he’s honest, he’s straightforward and I think as an athlete, at the end of the day, that’s what you want.

On his first impression of how McLellan runs practices
It’s no secret, you guys can see it, they’re up-tempo. I think that’s something that’s been well documented that we lacked last year. It sounds like a joke, but I think there were still some TSC employees on the ice when the first practice started. When he blows that whistle, he wants to get going so you’re weaving in and out of about five or six guys to start that drill…but I think that’s a good thing. He wants an up-tempo practice, he wants to be able to fit an hour practice into 40 minutes and not 20 minutes of standing around. As a player, we appreciate that too. I like up-tempo practices, you get in there, you get your work done and you get out. I think that they’ve been really good so far. [Reporter: Almost working smarter rather than longer, in a way?] Yeah, I mean you keep up-tempo, you get your reps in. You’ve got to practice up-tempo, because games certainly are up-tempo and obviously I think that hurt us last year.

On McLellan not being afraid to stop things too and go over
I think that’s one of the things he’s pretty good at. He always stresses that he wants us to know why we’re doing something, not necessarily just how or to just put the blinders on and go do it. He wants us to understand that there’s reasons behind some of the structure he wants to implement and that’s what training camp’s for too. We’re changing a little bit of a system and a lot of guys in the room, we’ve played a very similar system and not that we’re making monumental changes, but there’s certainly going to be things that are new and you’ve got to get your reps in. There’s going to be times where he’s going to have to stop and explain it and teach. I know that I can speak on behalf of everyone, everyone still wants to learn, especially when we’re changing a system like that and things are going to come up on our end too. We’re going to have questions and we don’t have all the answers, they don’t have all the answers, that’s why we’re a team and we’ve got to work through it together. He’s been really good at the teaching aspect as well.

On if it’s fair to say that McLellan has preached a more aggressive system, overall
I guess yeah, that’s fair. A little bit more aggressive, I think that we want to obviously create more turnovers and play more in the offensive zone, that’s the fun part of the game, no one wants to have to work their tail off to get the puck back, you want to have the puck. If we can do that a little bit more, and gain some offensive zone time, obviously that’s only going to bode well because you’re going to score more goals and you’re also not playing in your own end.

On if it’s what you want as a player to get a black and white approach with no gray area
Yeah, I think that regardless of your situation, in any aspect of life, you don’t want a [road apple-r]. You always want to know where you stand, you appreciate honesty. Sometimes, it’s not going to be what you want to hear but it’s important that you hear it. I guess that’s how I prefer it, I can’t speak for everyone, but I would think that a lot of guys appreciate that.